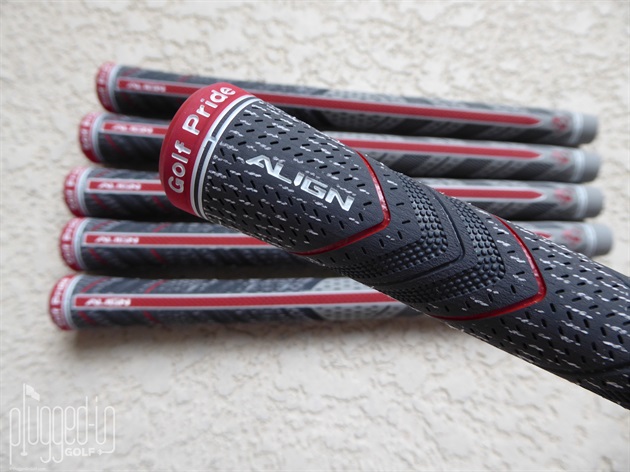 With a raised channel along the bottom of a tour-proven grip, the Golf Pride MCC Plus4 ALIGN gives players a reference ridge to aid repeatable, consistent hand position. 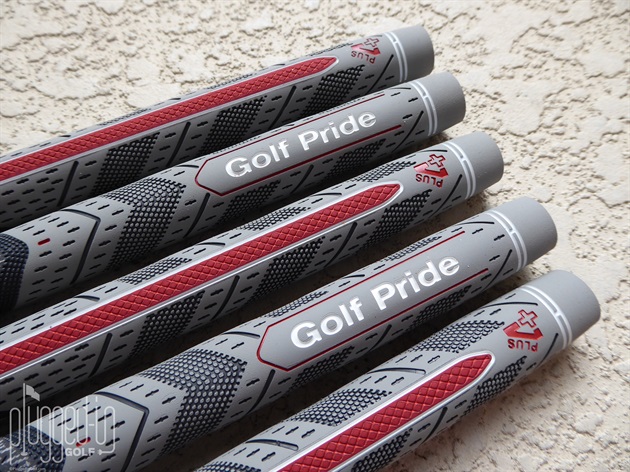 Surely this isn’t the first time you’ve heard of the new MCC Plus4 ALIGN grip – Golf Pride has been inundating us with advertisements promoting their new product.  You can probably quote their tag line in your sleep: “Consistent Hand Placement. Consistent Results.”  A ribbed or reference grip isn’t a new concept, but building it into a hybrid grip is.  With about a third of all PGA Tour players using reference grips, it’s no wonder Golf Pride was up to the challenge of producing a multi-compound version (if you’re unfamiliar with the base MCC Plus4 grip check out our review here).  So is ALIGN worthy of all the hype?  Read on. 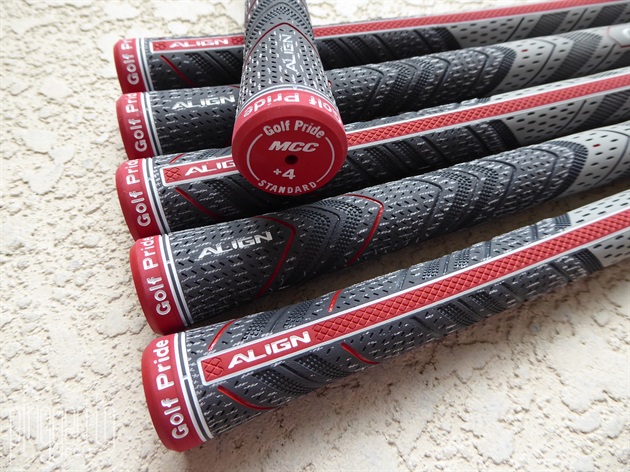 From the top side, the Golf Pride MCC Plus4 ALIGN looks identical to the MCC Plus4 except for red fill, red end cap, and of course the addition of the ‘ALIGN’ logo.  Flip the grip over and the red, raised guide is prominent and distinctive.  The Golf Pride MCC Plus4 Align is only available in grey, which really looks sharp in combination with the red.  If you are one of those golfers who prefers the ‘GOLF PRIDE’ logo installed facing down, that won’t be an option with the ALIGN. 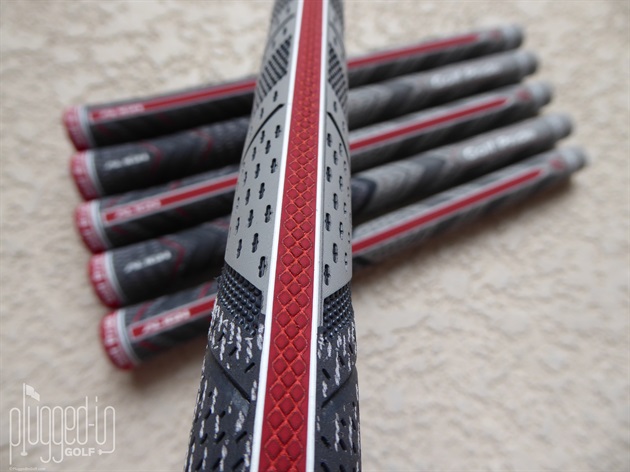 There’s no missing the raised ridge on the Golf Pride MCC Plus4 ALIGN.  Before it’s installed, however, the grip feels round and the channel texture inconsequential.  This is important to recognize if you’re choosing grips laid out on a table at your fitter or loose in bins at a store.  Raised by installation on the shaft, the ridge is best described as a channel with edges, not a rounded hump.  The micro diamond pattern of the red strip has an aggressive texture, and the material is noticeably firmer than the rest of the grip. 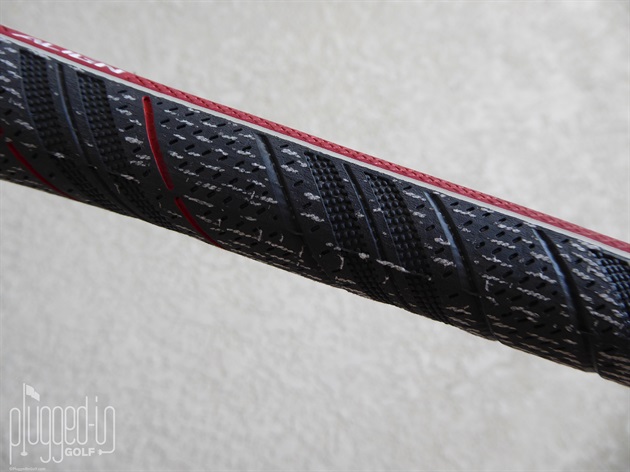 It’s worth stating again – there’s no missing the raised ridge on the Golf Pride MCC Plus4 ALIGN.  The ridge felt a little strange at first, like most new things, but quickly became a reference point.  The key is having the ridge in the same place in your grip every time.  For me, the ridge is in the first knuckle on my index fingers and the second knuckle on the other fingers.  Once I established that position after a few swings, I didn’t have to look at my club head to know the face was square for my setup.  This really helped with my 4 hybrid, which I tend to setup closed.  Similarly, in a fairway bunker the other day I was focused on my line to the green and established my grip without ever looking at the clubface.

How the ridge will align in your fingers will depend on your grip size (Golf Pride MCC Plus4 ALIGN comes in standard and midsize), hand size, and grip setup.  Golfers will find their own reference points to lock in consistency.  For an instructor, the ridge can be a wonderful tool for allowing the student to feel the desired hand position without getting bogged down in other setup mechanics.

One issue I encountered was with needing to open the clubface to hit a hard cut around a tree.  The ridge fell in an awkward spot on my fingers which compelled me to tweak the grip rotation ever so slightly.  Although that occurrence was a negative for me, I could foresee using the ridge to establish alternate hand positions or grip rotations for routine shot shaping.

As far as actual swing performance, I didn’t notice any appreciable difference between the Golf Pride MCC Plus4 ALIGN  and the non-Align version.  If you are someone who feels like the grip wants to twist at impact, the ridge may be of benefit.  For better players who understand face position, the ridge provides feel, or feedback, at all times during the swing. 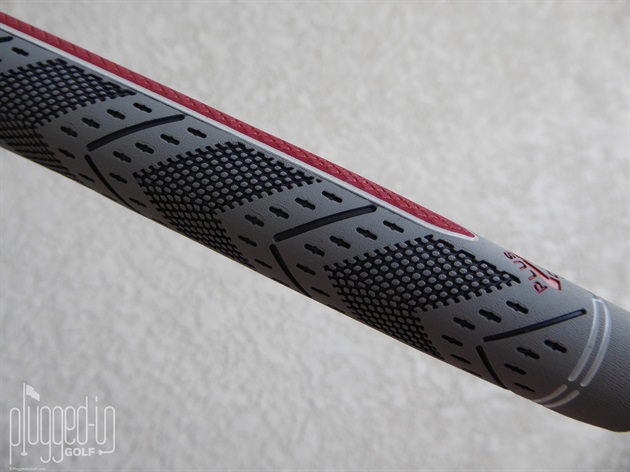 I asked All-American Alabama quarterback Steve Sloan if he always gripped the football the same and he replied with his country boy charm – “I tried”.  Then I handed him my 7 iron with the Golf Pride MCC Plus4 ALIGN grip and watched his eyebrows perk up.  Similar to the laces of a football, he had a tactile way to establish his grip  – “I can see where this could be of benefit.  Great tool,” he said.

Whether the raised channel gives you a reference point for your proper hand position, or is just a positive reminder that keeps you from having to think about a square club face, the Golf Pride MCC Plus4 ALIGN  is a grip suitable for players of all levels.  In a game such as golf that can consume your mind, taking even one variable – the grip – out of the equation is a plus. 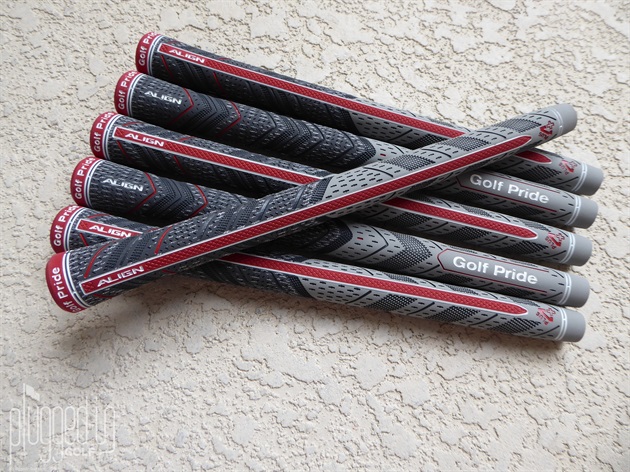 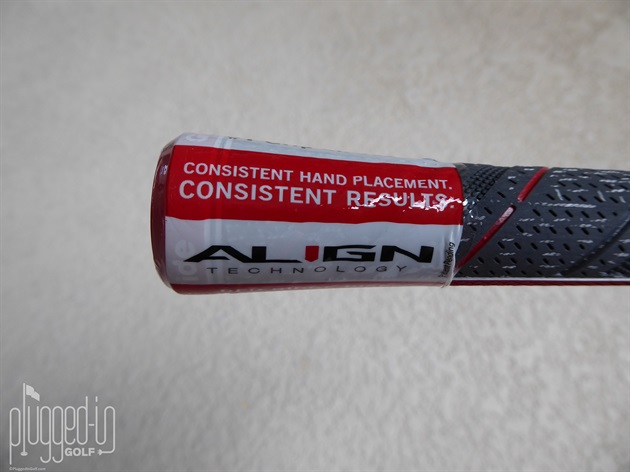 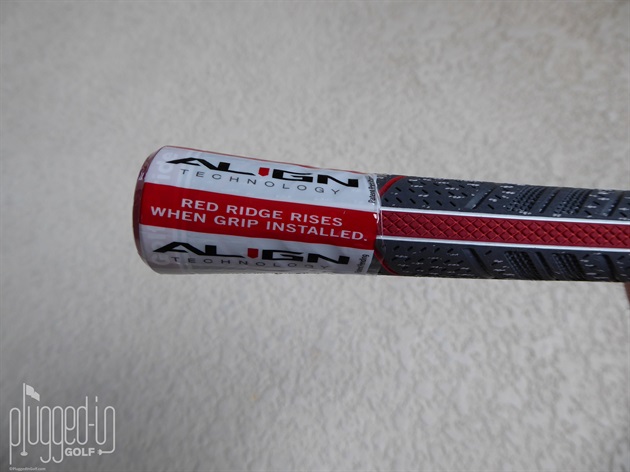 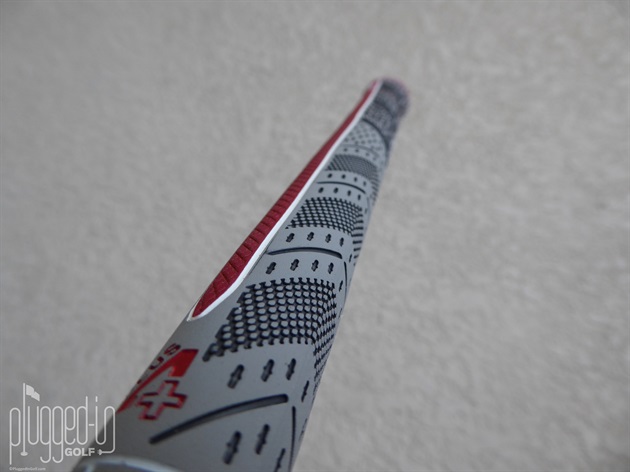