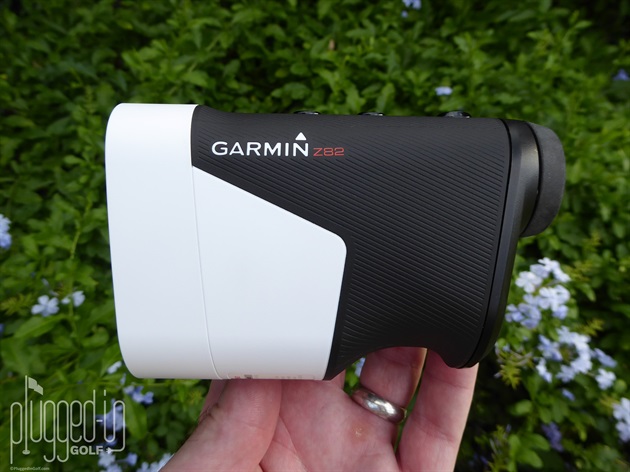 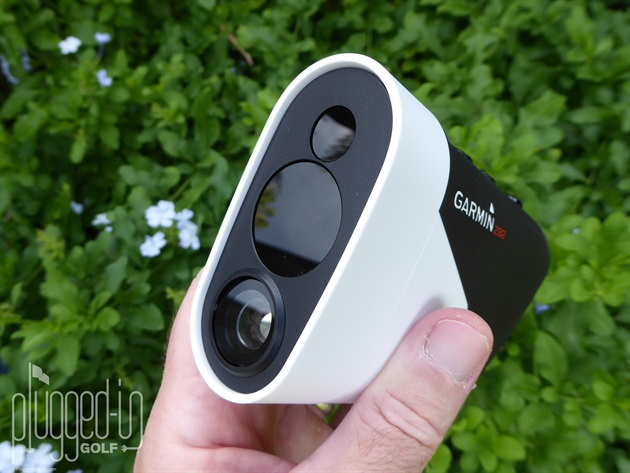 Back in 2018, I declared the Garmin Approach Z80 the “Biggest WOW factor of the year” and the same could be said of the new Z82.  Although the units look nearly identical (a blue tournament mode indicator light was added to the top), the Approach Z82 has numerous new features inside plus expanded capabilities when paired with the Garmin Golf app.  Garmin calls the Approach Z82 a “laser rangefinder with GPS” but the technology goes even further. 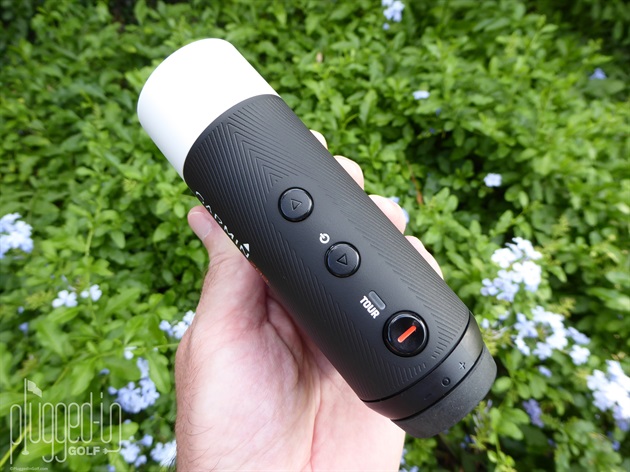 Although there’s a ton of technology associated with the Garmin Approach Z82, I found it fairly intuitive to use.  Anytime I got confused, all I had to do was remember there are only three buttons – up, down and select.  If you’ve used a laser rangefinder before, the select button will be familiar.  Getting distance to an object is as simple as holding down one button.

The Z82 has a built in 15 hour lithium-ion battery that charges via a USB port.  A flashing blue light under the eye piece lets you know when the unit is in standby mode, and you can wake it up by pushing any button or by simply wrapping your thumb around the bottom – ingenious.

One of the coolest new features of the Approach Z82 is the wind speed and direction graphic.  To use that function, you need to have the unit paired with your phone and the Garmin Golf app open.  Pairing was simple as was filling out the basic user info in the free app.  The app offers a bevy of options for stats and group play plus Find My Garmin for those golfers who tend to leave their rangefinders in carts.

Selecting PLAY GOLF engages satellites that find the nearest course (there are more than 41,000 preloaded) and asks you to select/confirm and then which tees you are playing.  After that, the unit automatically identifies the closest hole and displays it on the left side of the screen in stunning color.  Transition to the next hole is automatic.  I tried to trick the unit by doubling back to replay a hole and the Z82 knew exactly what hole it was.  Along with being able to keep score on the unit, you can also keep stats on fairway hit/miss left/miss right and number of putts. 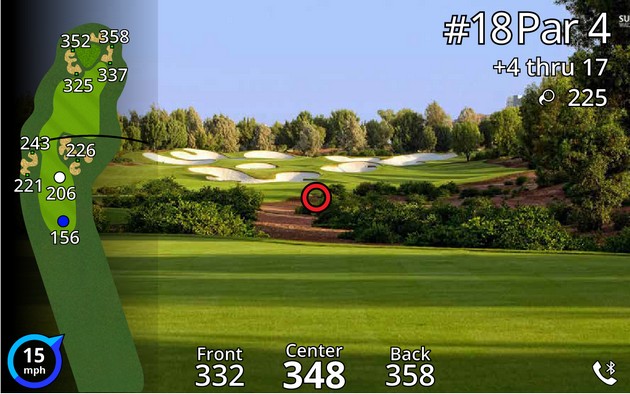 The photo above is a great example of the informative data the Garmin Approach Z82 provides.  The black arc on the left represents the driving distance you enter during initial setup and the amazing graphics reveal the vast fairway just beyond that arc – something that’s not obvious to the naked eye standing on the tee box.  And that “225” in the top right?  That’s the last measurement sighted.  Maybe not so important on this hole, but a great feature for me on a par 3 where I often have to re-shoot because I forgot the distance on the way back to the cart to grab a club. 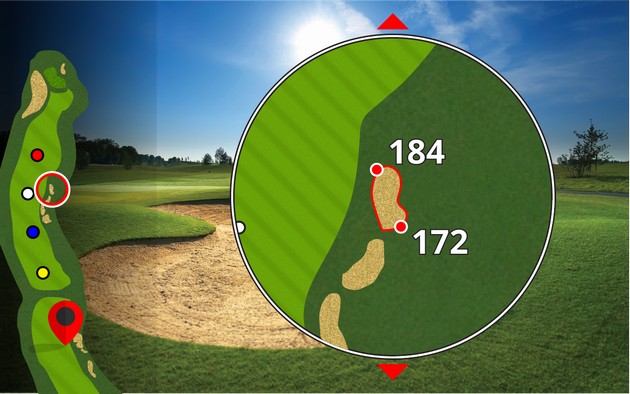 HAZARD VIEW is a new feature that provides front and back yardages to individual bunkers.  It’s engaged by using the up/down buttons.  In the example above, hitting the down button would take you to the bunker below the one outlined in red.  It sounds cumbersome, but it’s very easy to navigate and a feature I found very useful on protected doglegs. 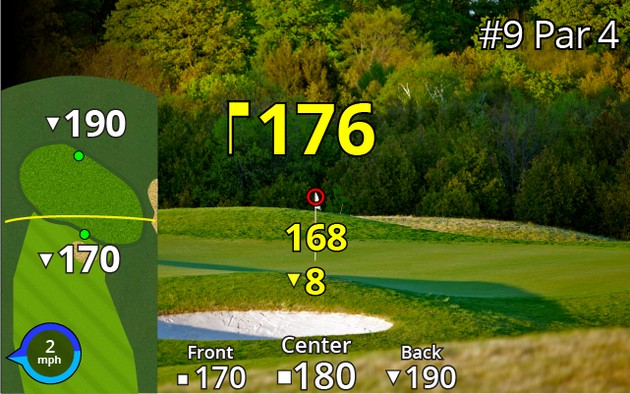 As you get closer to the green, the display changes to GREEN VIEW with Front, Center and Back figures populated across the bottom.  In the example above, the flag is at 176 yards, but is slope adjusted to a PlaysLike distance of 168.  The Z82 also adds a yellow arc for a visual indication of what lurks at the shot distance.  Comparing distances with several other quality brands, I found the laser ranging of the Z82 very accurate. 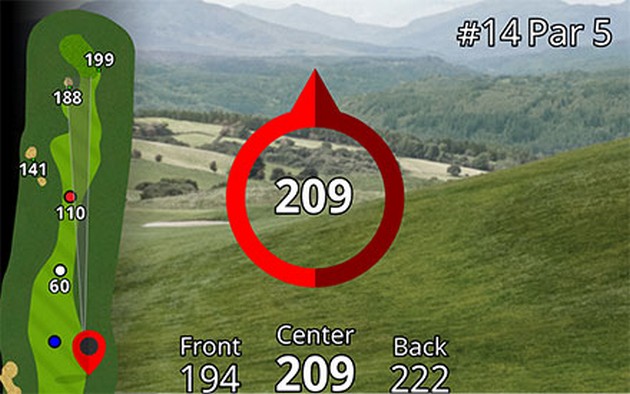 One feature I was glad to see again is PinPointer mode, which displays a large, red arrow that orients you towards the pin and provides yardage to the center of the green.  Not only can this be a great feature for blind approach shots, but it can add some excitement for big hitters who want to cut a corner and attempt to drive a green.  Number 9 at Spirit Hollow (full review HERE) is a fun example as Matt Saternus can attest.

With wind being a significant factor in shot selection, I was intrigued with the prominent new wind speed and direction indicator that Garmin included in the Approach Z82.  I didn’t have a method to check speed, but the values seemed believable.  Direction was generally accurate per grass toss comparisons.  As any good golfer knows, wind can be fickle and inconsistent, but for general purposes I found the indicator helpful, especially in sheltered areas. 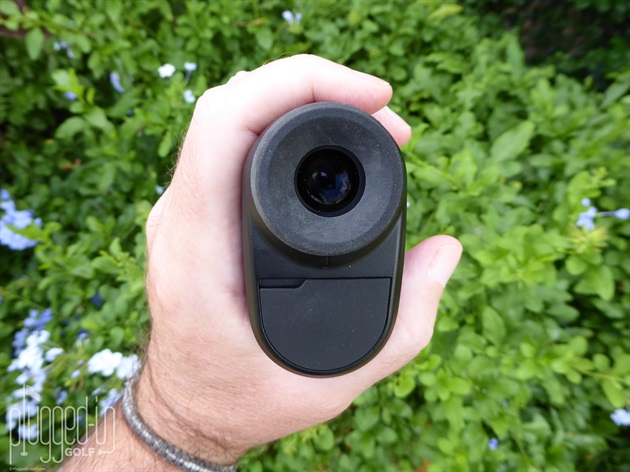 The good news is the Garmin Approach Z82 is the same price as the previous generation.  That means it still retails for $600 (support Plugged In Golf, buy it HERE), which makes it a sizable purchase.  But with quality laser rangefinders and GPS units each costing in the $300 – $400 range, the price of the hybrid Z82 is a little easier to justify.  If you need a bit more rationale, factor in the number of times you check distance throughout a round – it’s many times more than you hit that $500 driver. 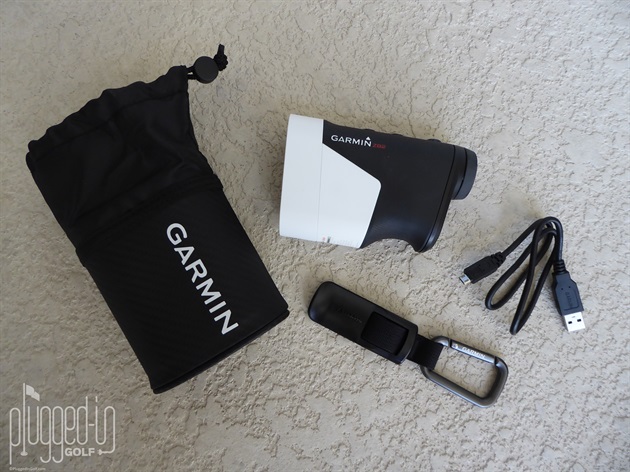 I wasn’t looking to set the mark for longest PIG review, but the features in the Garmin Approach Z82 seem endless.  It’s amazing how much technology Garmin can fit into a hand held device.  The ergonomic shape fits my cadet medium size hand nicely, and the unit feels solid.  For golfers who want all the data they can get before executing a shot, there’s no topping the Approach Z82 – it’s a technological gem.