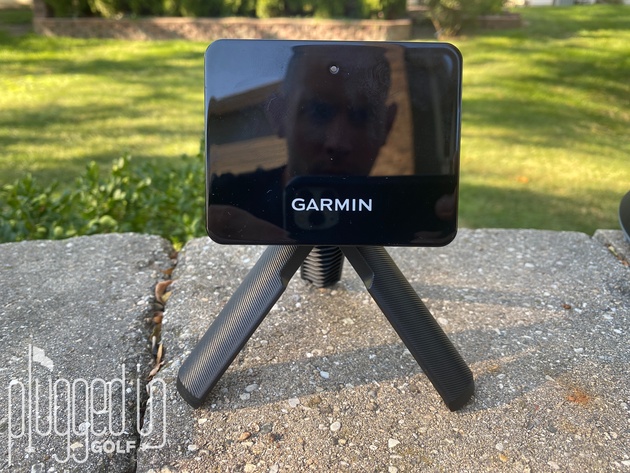 The Garmin Approach R10 launch monitor is one of the most impressive pieces of golf technology that I’ve ever tested.  Easy to use, strong accuracy.  Simulation ability gives it immense longevity.  Works indoors and out. 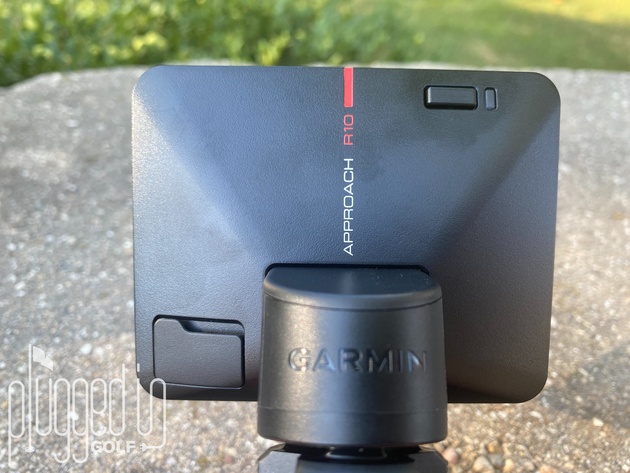 When you think of Garmin, you probably think of GPS watches or handheld units.  However, in the last couple months, all the buzz around Garmin is about their new Approach R10 launch monitor.  The reason for the immense hype is that it’s delivering things we’ve never seen before at the $600 price.  Is this little device the death of the multi-thousand dollar launch monitor?  Let’s find out.

Fair warning: there’s a lot to discuss here, so this review is going to be lengthy. 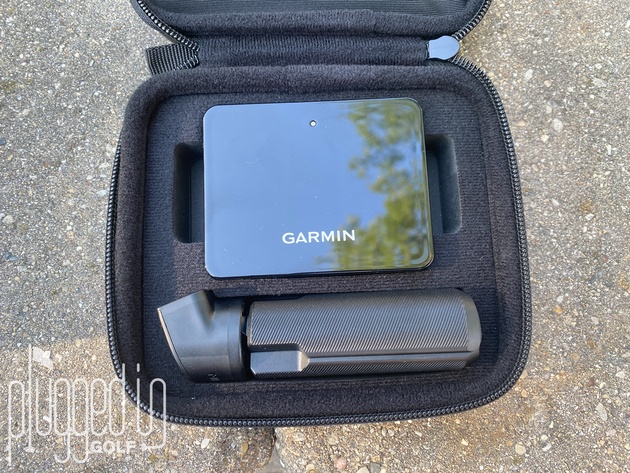 When you unbox the Garmin Approach R10, you’ll find the square black carrying case.  Unzipping that case reveals the Approach R10, tripod, charging cable, and the two pieces of the phone mount.  The Approach R10 charges with a basic mini USB cord.  Plug it in until the LED light is solid red, indicating a full charge.

The accessories for the Garmin R10 are sturdy and thoughtfully designed.  The tripod is magnetic and sets up extremely quickly.  Similarly, it takes only a few seconds to get your phone mounted to your golf bag so you can film your swing and check the launch monitor stats. 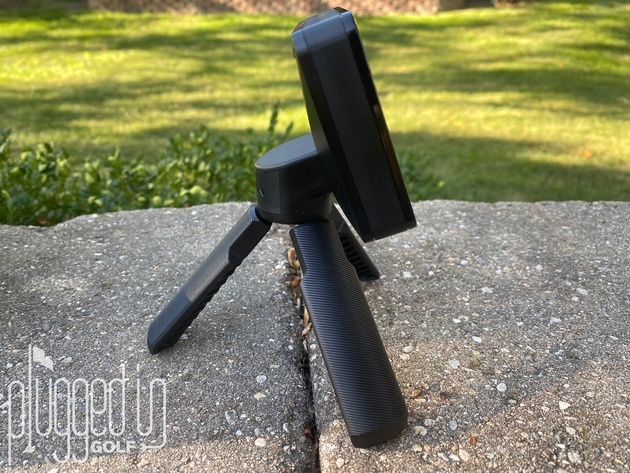 Setting up the Approach R10 is similar to most other radar-based launch monitors.  Garmin recommends that the device be six to eight feet behind the tee location.  Garmin also states that ball and club angles are measured relative to the target line, so you need to get the device aimed exactly at your target.  I’ll also note that, for indoor use, I was able to get consistent data with as little as six feet between the teeing area and the net.

I found the connectivity of the Approach R10 to be excellent.  With the Garmin app downloaded, I turned on the device, pushed a couple buttons in the app to link the device with the phone, and got to work.  The Garmin app does a wonderful job being easy to use without dumbing down the options.

Garmin’s published accuracy parameters are +/- 3 MPH for club speed, 1 MPH for ball speed, 1 degree for launch angle and launch direction, and 5 yards for carry distance.  These numbers are based on Garmin’s comparisons with Trackman.

In my testing, I found that the Approach R10 was well within those parameters the vast majority of the time.  Per Garmin, the accuracy parameters should hold up indoors and outdoors, though the R10 is expected to be more accurate outdoors because it can see the full flight.  I found this to be true – the R10 was often perfectly in line with a professional grade launch monitor outdoors.  Indoors, the accuracy was very acceptable, but it was perfect less frequently.

The one parameter that did get out of line occasionally was spin.  I found this to be more common with wedges and mishit shots – the R10 tended to report much higher spin numbers.  With the driver through the scoring irons, well struck shots were often within a couple hundred RPMs of a professional grade launch monitor.

One final note on accuracy is that it is difficult to aim such a small device with great precision.  As a result, you may see your club delivery and horizontal launch angles be “off” by a degree or two.  For example, if you’re aiming at a flag, but your R10 is aimed slightly left of the flag, a perfectly on-target shot might read as having a launch direction of 1 degree right.  My advice is to align yourself with the R10 as best you can and focus on creating consistent numbers rather than worrying that the numbers are “wrong.”

The bottom line is that the Approach R10 is accurate enough for the overwhelming majority of golfers.  If you’re a professional club fitter, of course you’re going to want perfect spin numbers.  If you’re a Tour Pro, it’s natural that you would want perfect accuracy when measuring your practice.  For the rest of us, it’s pretty hard to argue that the more than thirty times price difference between the R10 and a professional grade launch monitor is justified.

A major part of the appeal of the Garmin Approach R10 is the fantastic Garmin Golf app.  The driving range feature, which most people will use the majority of the time for their practice, is amazing.  It allows you to look at your data in one of four ways: a range view, a club/impact view, every number (above, left), or three numbers (above, right).  What’s more, within each mode you can customize the data display to show the metrics that you care about.  I like this best in the range view where you can easily see the ball flight and check in on three metrics, say Carry Distance, Smash Factor, and Total Deviation.

Another great feature is the video mode.  This is the fifth way you can use the Driving Range.  Set up your phone so that you can see your swing (the included clip is perfect for this) and get to work.  The app automatically clips the video so you only see the swing, not thirty seconds of waggles and rehearsals.  If you like seeing your swing on film, this feature alone is so good that it might make the R10 worth buying.

I’m a huge fan of Home Tee Hero.  First, it includes every course that Garmin has mapped, so you’re never going to run out of options.  You can play everywhere from your local muni to Pebble Beach.  The graphics are a little cartoony (see above, left), but I actually prefer that – it’s a reminder that we’re playing a game and should be having fun.  They’re also very easy to see on your phone.  Additionally, I like the automated putting – inside a certain range gets you a one-putt, anywhere else on the green is two.

The other simulation option is TruGolf E6 Connect.  As you can see above, this provides much more realistic graphics and a much deeper experience.  I think this is more for the person who’s going to set up a projector or at least a large tablet to appreciate the graphics and options.

With either app, the simulation adds so much value to the Approach R10.  Hitting into a net with launch monitor data is great, but it has its limits unless you’re a true grinder.  Being able to pull up a course and hit a variety of different clubs and shots not only makes practice more fun, it makes it more game-like.

It should be noted that the simulation can add to the cost.  The Home Tee Hero simulation is free for the first month, then costs either $9.99/month or $99.99/year.  Buying the Garmin R10 Approach gives you access to five courses in TruGolf E6 Connect, but adding more courses or types of games costs more money.

The Garmin Approach R10 checks every box for longevity.  It’s portable, easy to use, and a ton of fun.  While I think simulation is its secret weapon in terms of longevity, others are going to fall in love with the video mode.  The R10 has so much to offer that not only will it make your practice more meaningful, it will help you to practice more.

Another small point worth making is that this device has excellent battery life.  The fact that you don’t have to worry about charging it after every session makes it much easier to use.

The Garmin Approach R10 retail for $599.  This is a unique price in the personal launch monitor space as there are currently several options at $500 then a large jump to more professional models around $2,000.

Comparing the R10 to any of the $500 launch monitors is a first round knockout in favor the R10 – none of the competitors offer the breadth of data or simulation.  To get a comparable amount of data, you need to jump to Mevo+ [review HERE] or SkyTrak [review HERE], both of which cost $2,000.  If that doesn’t make it clear, I’ll spell it out: the Garmin Approach R10 is an amazing value. 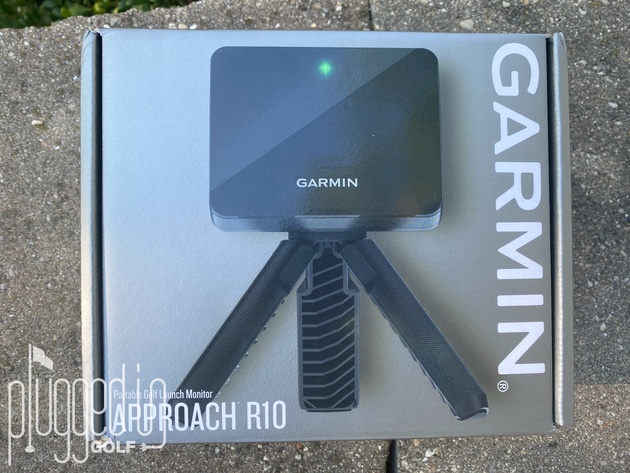 The Garmin Approach R10 launch monitor is one of the few much-hyped golf products that actually delivers well beyond the buzz.  Every time I used it, I came away more impressed and more excited about using it again.  Whether you’re a serious data nerd or someone looking for some golf simulation fun to get through the winter, the Approach R10 is perfect.