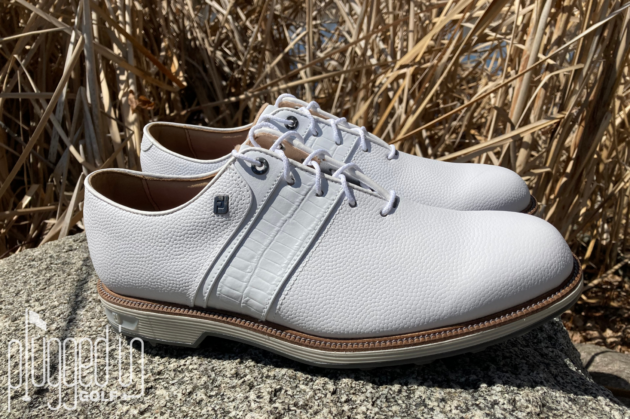 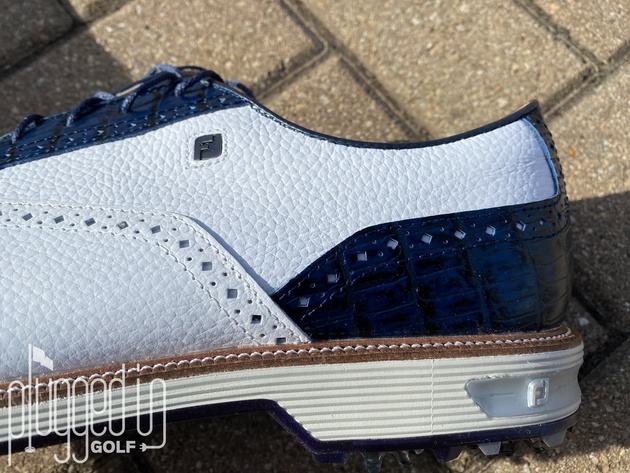 Good, bad, and ugly, fashion has been a part of golf since its very earliest days.  When it comes to the good, the name “FootJoy” has become iconic.  Nearly 100 years ago in 1927, Field and Flint Company’s FootJoy line of golf shoes became the official shoe for American Ryder Cup team captained by the most stylish golfer of his day, Walter Hagen.  Today, its classic silhouette has been recaptured in the Premiere series and is now ubiquitous on pro tours worldwide.  Find out why in this review.

Need something more modern?  Check out the FootJoy Fuel HERE 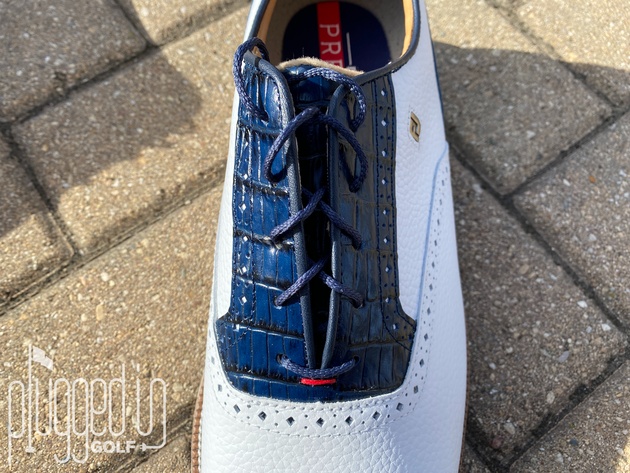 In a world where the vast majority of golf shoes look like athletic shoes, the FootJoy Premiere stands apart.  And compared to other traditional golf shoes, the Premiere series is a clear cut above.  Everything about this shoe is first class.  There are so many interesting details in each shoe that they almost demand you stop and inspect them. 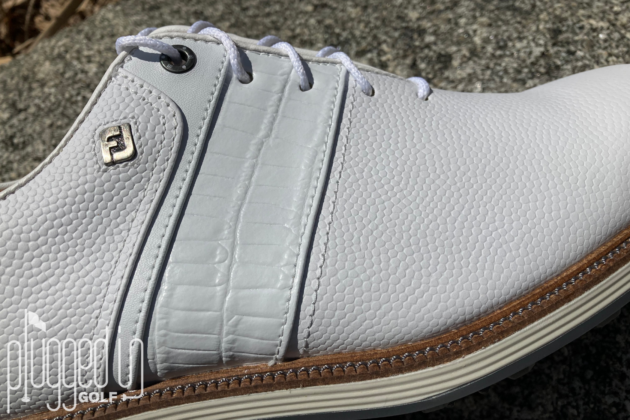 The FootJoy Premiere series covers three different styles of shoe.  The blue and white shoe seen in this review is the Tarlow.  The Tarlow is also available in all black and all white.  There is the Packard, a spiked shoe with a slightly less flashy look, available in white (shown here), black, and white/navy/red.  The Packard is also sold as a spikeless shoe in grey.  Finally, there’s the spikeless Flint, available in white, navy and black.

The only downside about there being three styles?  As Dylan, our resident fashion expert, said, “After getting comfy with one pair, it’s hard not to want to add another to the closet.” 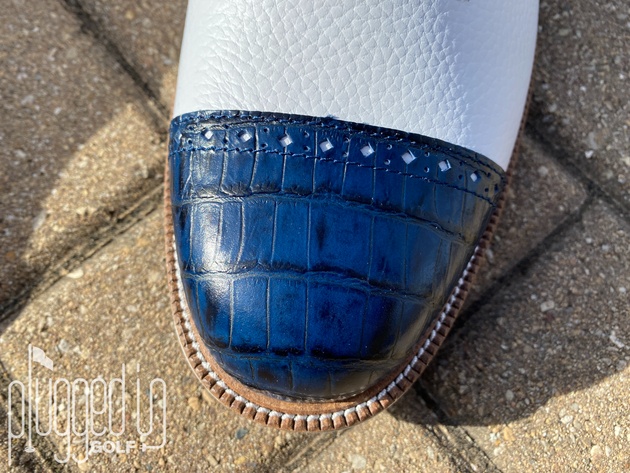 The FootJoy Premiere looks like it ought to be a heavy, traditional golf shoe, but I was pleasantly surprised by how light it is.  In size 13, it weighs 17 ounces – fairly average – but it feels lighter on my foot and, again, is much lighter than it looks. 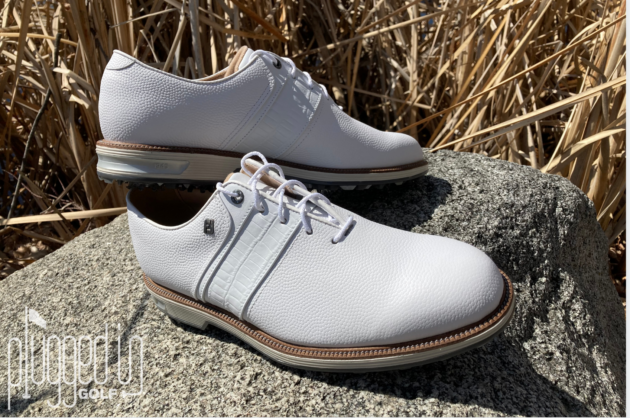 Meeker and I agreed that the Premiere has a snug fit that does match its look.  The sole is rather rigid and stable though it has good cushioning.  None of us had a sense of feeling the spikes in a negative way.  Sizing for the FootJoy Premiere Series was in line with other FootJoys that we have tested.

Dylan noted that the Packard was “surprisingly comfortable,” but they did require a short break in period. 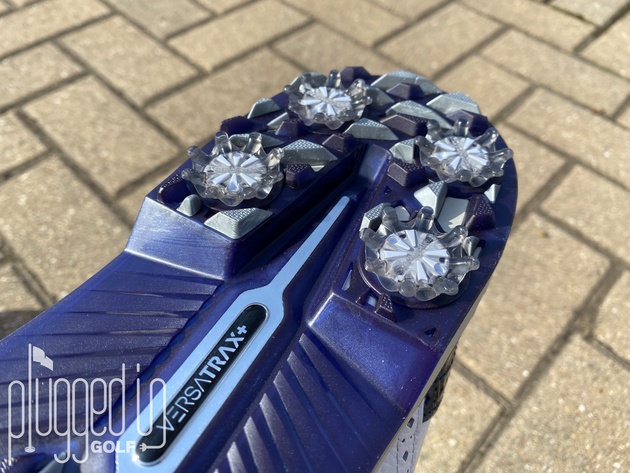 Dylan wore his Packards through a particularly rolling course and reported the following:

Looking good is fun, but given the choice I think we’d all prefer to play good.  FootJoy is right there with you as the Premiere has clearly been built to perform.  The bottom of the shoe looks different from previous iterations of FootJoy shoes.  There’s a lot going on but every element of this new VersaTrax+ technology is designed to provide optimum traction on all kinds of stances and conditions.

I can attest from my walk up and down some of the most undulating terrain I’ve played that this technology works remarkably well.  The other performance aspect I’d like to highlight is the confidence factor.  Golf is a game of confidence and momentum, and it sure does feel good over a putt or chip to get your feet set and see something so sharp looking up at you. 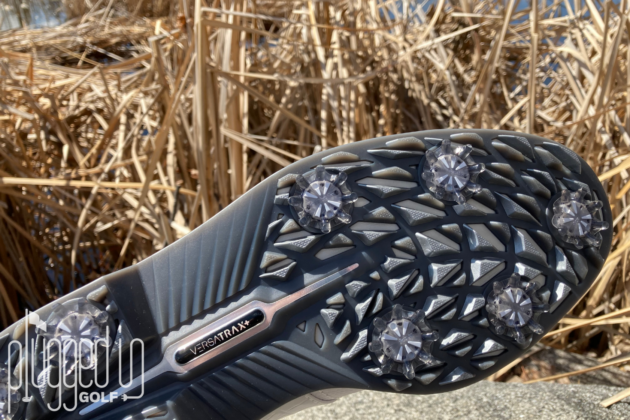 The main thing that Matt Meeker and I noted was the stability of the Premiere Series.  The VersaTrax+ sole roots you to the ground, and the leather upper provides support in every direction.  Whether walking over rolling terrains or swinging all-out in mushy conditions, I always felt that I had a strong base. 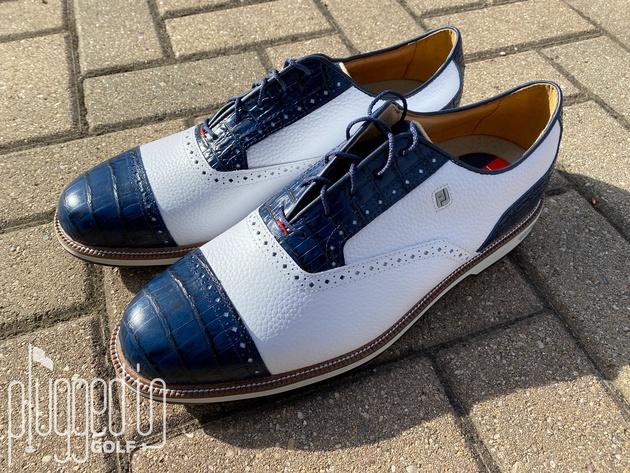 In an increasingly casual world, the FootJoy Premiere Series is a break from the norm.  While the style may not resonate with every golfer, the performance of these shoes can be appreciated by any player.