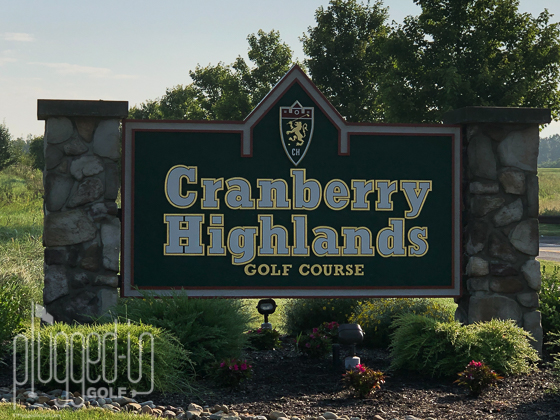 Cranberry Highlands Golf Course, located just outside Pittsburgh, is a fun, well-maintained course that makes good use of the natural elevation changes. 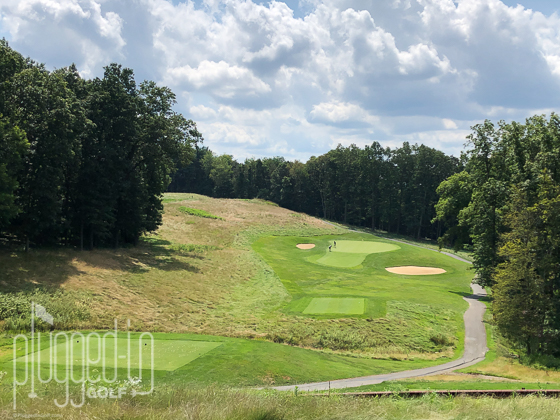 A few weeks ago, I turned to Twitter to find a place to play while in Pittsburgh for a wedding.  The wisdom of crowds led me to Cranberry Highlands Golf Course, located in the town of Cranberry, a short drive from downtown Pittsburgh.  My round at this course made me very happy that I haven’t stopped reading my mentions. 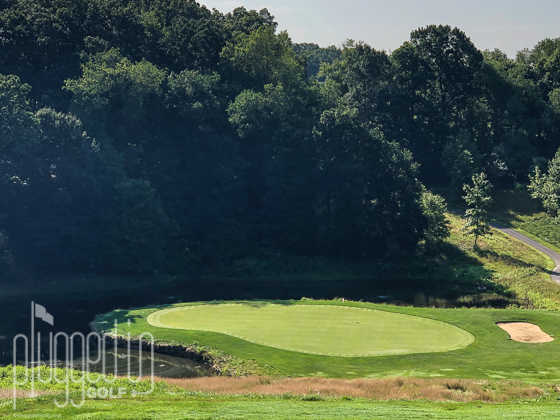 Cranberry Highlands has everything you could want from a municipal course.  The clubhouse has all the basics – soft goods, a handful of clubs, and essentials like balls and tees.  There’s also a fully stocked bar and snack shop that’s smartly located right inside the door by #9 green.  One thing that’s well above average are the GPS systems on the carts – a big plus for the first-time player.

Just as important, everyone I interacted with at Cranberry Highlands takes evident pride in their course.  On a weekend morning, there are at least two starters out front making sure that everyone is on time, knows the rules, and keeps up the pace.  During the round, I saw the marshal and the drink cart numerous times.  Even more impressive and unusual, the head pro makes at least two trips around the course each day to check in with golfers. 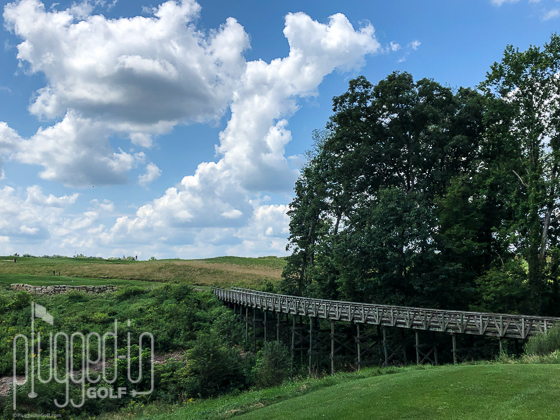 Two things struck me as I played Cranberry Highlands.  First was the amount of elevation change.  Coming from the Midwest, I don’t associate municipal golf with these dramatic ups and downs.  Several of the par 3s feature precipitous drops as do a number of the tee shots on the par 4s and 5s. 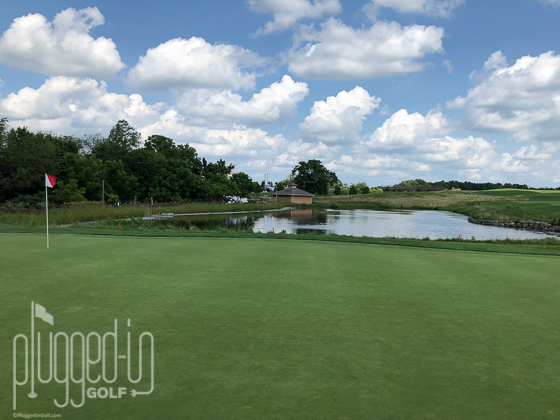 The other thing that stood out was the peace and quiet.  Again, municipal golf in my area means a course bordered by houses and roads.  Unless you’ve got a pair of binoculars, you won’t see anything at Cranberry Highlands except nature and golfers.  That also means you won’t hear anything.  Even if this course wasn’t beautiful, I’d play here for the serenity. 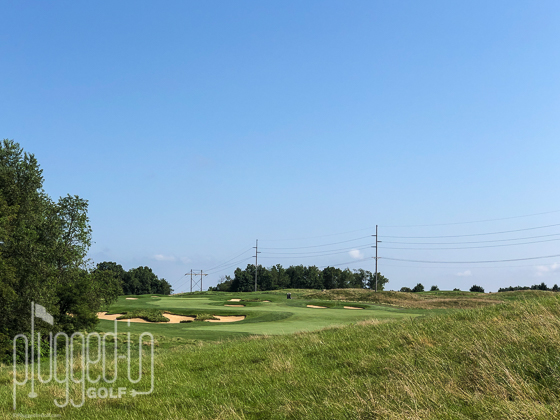 Cranberry Highlands isn’t a very long course – it tips out at 6,564 yards with a par of 70 – but it can be penal off the tee if you’re wild.  The fairways are no more than average in width.  Off the fairway, there’s a solid buffer of rough, but then you hit the tall grass.  If you know exactly where your ball went in, you have a decent chance of finding it.  If you’re doing a lot of walking and hoping, you’re likely to lose a lot of balls.

The fairway bunkers at Cranberry Highlands are perfectly placed for the recreational golfer.  For the players that drive it between 200 and 250, there will be constant risk/reward decisions about where to aim and what club to hit.

Don’t let my talk about fairway bunkers and tall rough give you the wrong idea: there’s a lot of fun to be had off the tee, too.  Cranberry Highlands has numerous short par 4s and the two par 5s on the front nine play shorter than you’d expect.  You’ll have plenty of opportunities to hit a bold drive and be rewarded with an exciting approach. 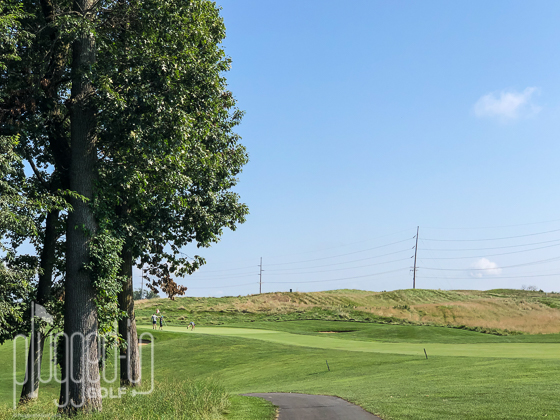 Your approach off the tee will dictate the kind of shots you hit into the greens at Cranberry Highlands.  If you’re crushing your driver, you’ll have a lot of wedges in hand.  If you play a more conservative game, you’ll have a steady diet of mid irons.

The fairways offer a major advantage: the lies are almost universally flat.  You won’t have to deal with many unusual stances unless you’re wandering around the rough.

This is a course that favors high approach shots with stopping power.  The fairway does run all the way to the green on most holes, but you’ll need to put a lot of steam behind a low shot to run the ball very far.

Like most shorter courses, Cranberry Highlands packs in extra yards by stretching out their par 3s.  Their quintet tips out at 194, 198, 207, 184, and 218 yards, respectively.  On balance, several of them play at least a club less due to elevation.  If your long iron game isn’t strong, think twice before running to the back tees. 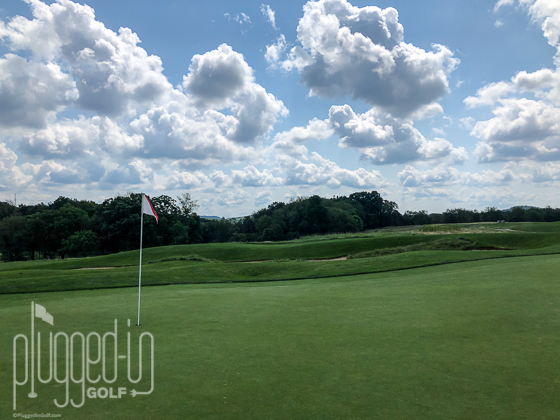 To pile up greens in regulation, you’ll need a sharp iron game as the putting surfaces at Cranberry Highland are a bit smaller than average.  Conditions are very good, and the greens run at a quick-but-fair speed.  The contours tend toward the mild side, but there is enough movement to give each green character. 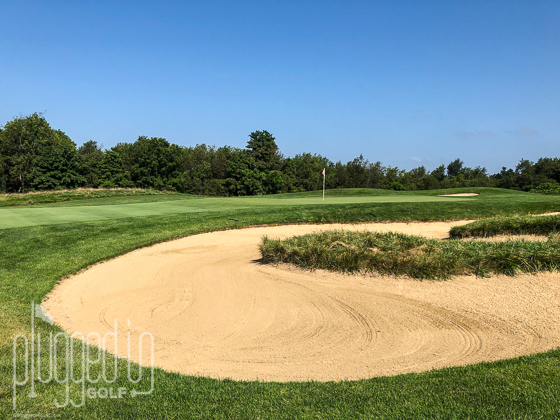 With one exception, every green is protected by at least one bunker, but there’s always a safe quadrant you can favor if you’re afraid of the sand.  The grass around the greens tends to be fairly thick except where the fairway runs up.  This typically provides a favorable lie for getting the ball up and stopping quickly.  There isn’t too much elevation in the surrounds, so the short game is fairly straightforward. 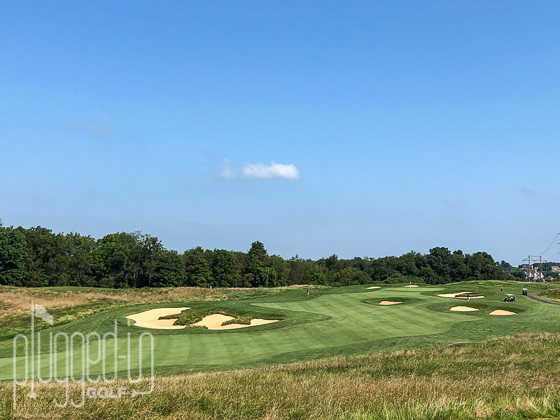 The look of this hole can change completely depending on the tee box you use.  From the “straight on” tees, the rising fairway is interrupted by a large bunker that forces you to play out to the right of hit a powerful drive.  When you play from the tees to the right, it becomes a question of accuracy: can you thread the needle between the large bunker left and trio of smaller bunkers right.

Are you willing and able to bomb your drive over a row of trees to cut the corner, or do you want to leave yourself a tough approach on one of the longer par 4s on the course?  That’s the question you need to answer on the tee.  Regardless of your route, you need to get deep into the fairway to have a good angle into the green. 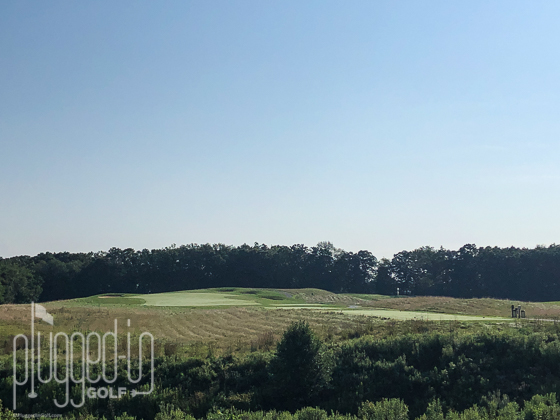 If I had a home course like Cranberry Highlands, I would play a lot more local golf.  This is a beautiful course with a lot of fun holes.  It’s also enjoyable to play at a place where the staff clearly cares about the course and their golfers.  I’m happy to pass along the good advice I got on Twitter: if you’re going to be in Pittsburgh, make time to play Cranberry Highlands.