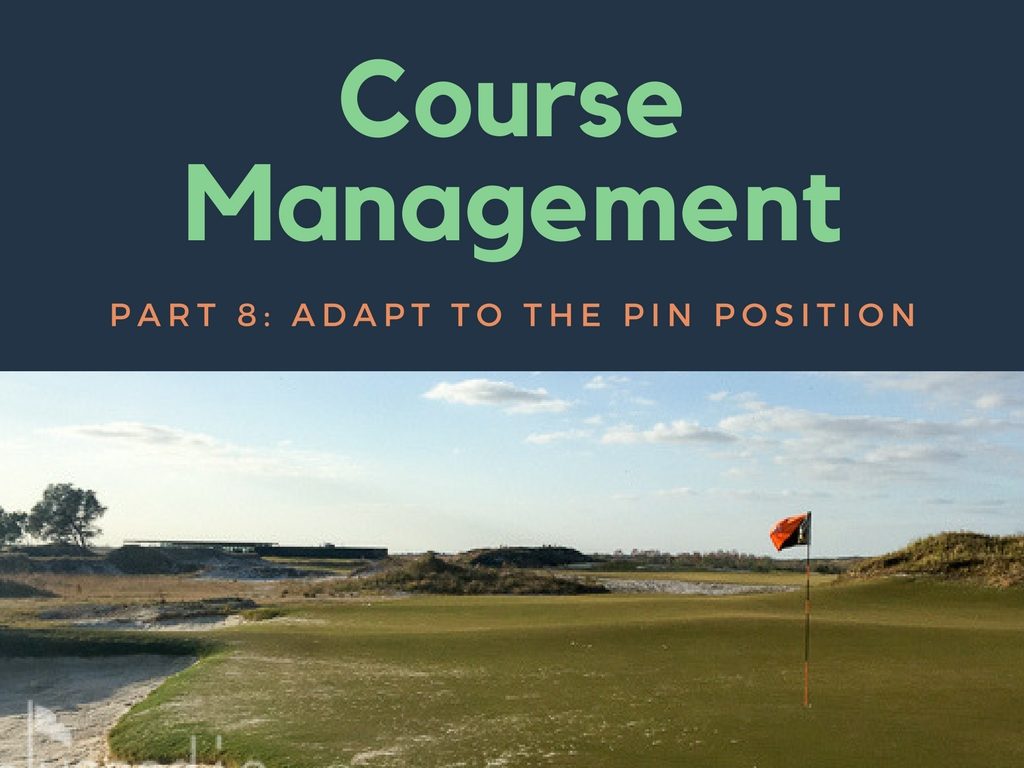 The object of golf is to get the ball in the hole, so it only makes sense that the hole’s location would dictate your strategy.  Or does it?

In this lesson, I’ll discuss whether or not the position of the pin should change your plan.

You want to score better with the swing you have 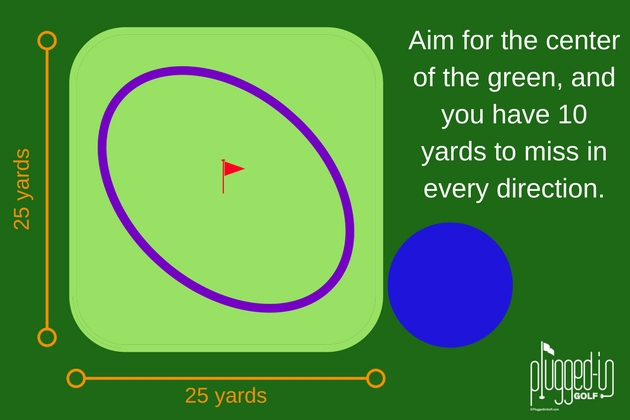 Let’s start by establishing this most basic principle: a green in regulation is a wonderful thing.  In the vast majority of situation, being on the green is better than being off of it.

With that in said, let’s think of an average green – square-ish and around 6,000 square feet.  That’s roughly 25 yards long and 25 yards wide.  If we aim for the center of that green, we can miss right or left by 10 yards, come up 10 yards short, or smash it 10 yards long, and still be on the putting surface.  That is a formula for a lot of GIRs and a lot of birdie putts. 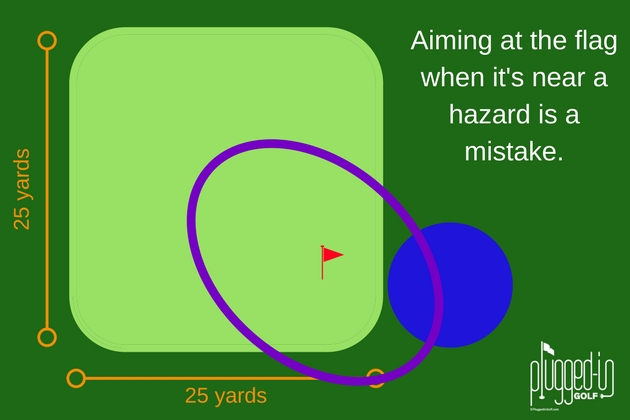 In this example, we’ve moved the pin toward the edge of the green and the water hazard.  If we move the center of our shot pattern to the flag, we will drown a number of shots, and our GIRs go from 100% to roughly 67%.  This is not the smart play. 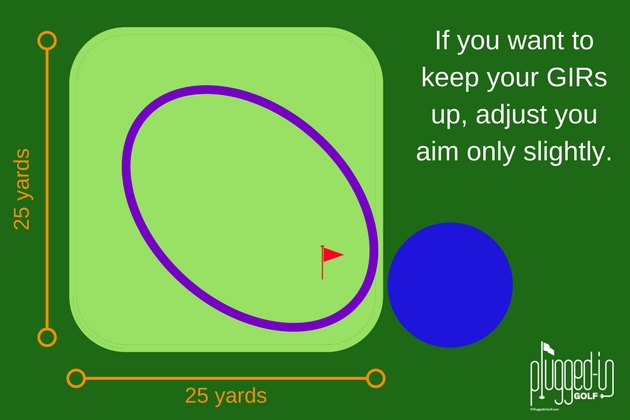 When the flag is near the edge of the green, and especially when it’s near a hazard, adjust your aim only slightly from the center of the green.  This keeps your approach shots on the green and out of the hazard.

The common push back to this thinking is that you won’t make as many birdies.  That’s not true, largely because you have no chance to make birdie from the hazard.  Even if we concede that aiming at the flag yields more birdies, that difference will not make up for the damage done by missing greens and finding hazards. 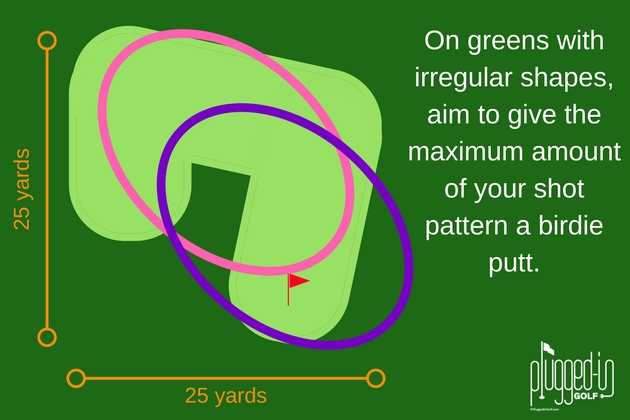 Most greens are not perfect squares.  We have ovals, circles, horseshoes, and every other conceivable shape.  When faced with such a green, we don’t want to blindly aim at the middle (pink, above) because we can end up with putts that aren’t makeable.  We don’t want to center our shot pattern on the flag either.  Aim so that the maximum amount of your shot pattern has a birdie putt. 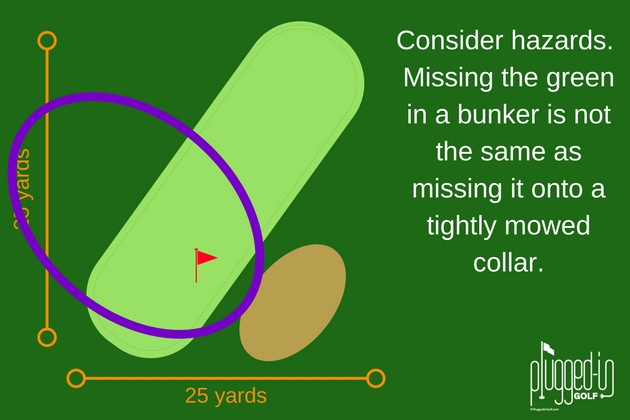 Of course, we also want to take hazards into consideration.  On the green above, we are going to aim long and left of the green.  The center of our shot pattern is barely on the green, but this takes the bunker out of play and gives us a lot of green to work with for a chip. 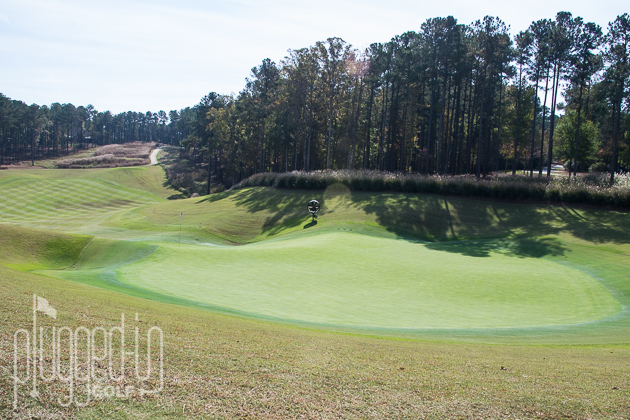 The green above, at Creek Club, is a dramatic example of tiers, but it makes a point.  If a green is heavily segmented with ridges or tiers, hitting the green in regulation may not necessarily be the best play.

The day I played Creek Club, the pin was on the lower tier.  I hit my approach to the upper tier – a GIR – but it was literally impossible to keep my first putt on the green.  My shot for par was a chip from five yards off the front of the green.  The superior strategy would have been to aim so that the back tier was not in play, even if that meant having a lot of shots come up short.

This example is dramatic, but hopefully you can appreciate the larger point.  You’ll want to take into account the condition of the fringe, the rough, and the hazards, but there are instances where the slope of the green makes certain sections undesirable. 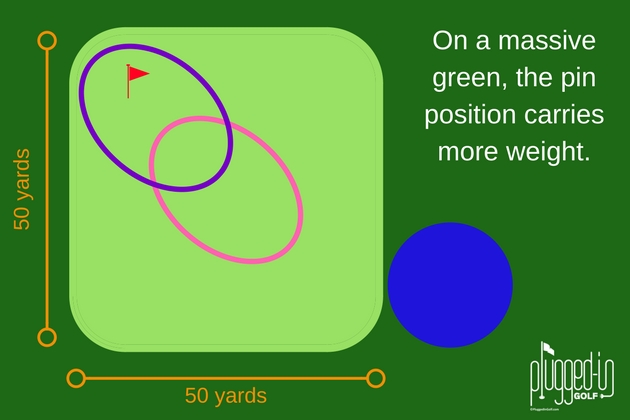 As the greens get bigger, you should give more consideration to the pin position.  In the example above, the green is now twice as big, so our shot pattern looks half the size it did before.  If we aim it at the center (pink), we are going to end up with a lot of very long putts.  While we’re still not going to aim directly at the flag – it’s too near the edge – we can aim much closer to it and still have 100% GIR.

In short, the position of the pin should impact your strategy, but not as much as most people think.  Rather than staring down the flag, you should be thinking about getting the maximum amount of your shot pattern onto the green and away from hazards.