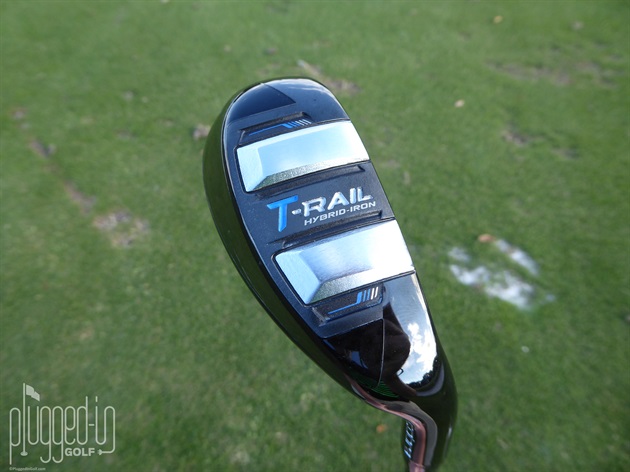 Designed to make it easy to get the ball airborne, the Cobra T-Rail irons are also long and forgiving.  Best in category looks add to the appeal. 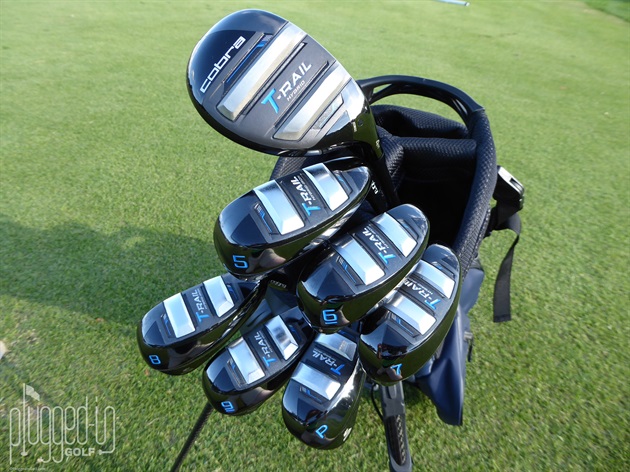 Hollow body super game improvement irons aren’t a new concept, but there’s a definite influx of offerings for 2020.  With a design emphasis on getting the ball airborne and maximizing distance for slow to moderate swing speeds, Cobra thinks their T-Rails will “help you experience the easiest golf of your life.” The Cobra T-Rail set, with T standing for Transitional, consists of iron-hybrid clubs in 5 thru PW and a true hybrid in the 4 spot. 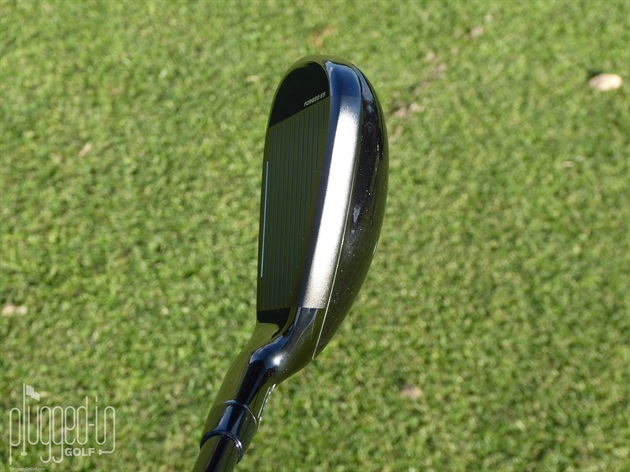 There’s no way to completely hide the size of an iron-hybrid head, but Cobra does a great job at minimizing it.  Looking down on the T-Rail irons, the all black appearance creates a slimming effect and disguises the thick top line.

The sole of the T-Rail irons reveal Cobra’s time tested Baffler Rails, which really stand out in their raw metal finish.  I like the size and location of the blue iron number and the simple Cobra logo on the trailing side of the toe. 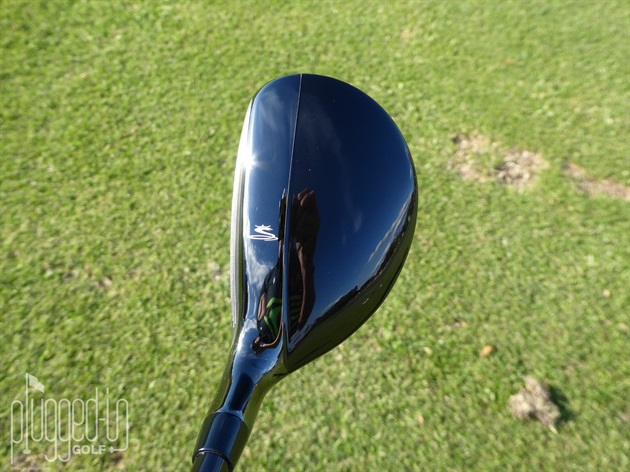 With the T-Rail 4 hybrid, the head shape (above) and face height (below) look familiar and comfortable to hybrid players.  Cobra designers did a wonderful job making the hybrid look consistent with the rest of the set.  The T-Rail 4 hybrid also comes with a spiffy head cover. 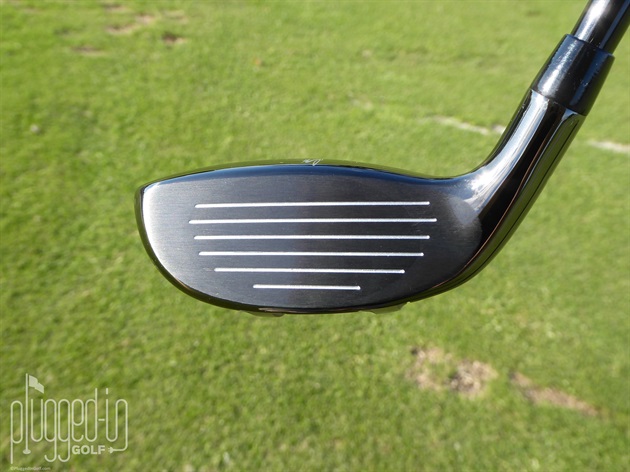 Although there’s a similar shape throughout the set of T-Rail irons, the sound does vary.  The pitching wedge had a metallic ‘ting’, whereas the 8 iron shifted to a woodsy ‘tock’.  With the 6 iron the sound had transitioned to a woodsy ‘tick’. The 4 hybrid had a classic, solid, metallic ‘crack’ at impact.  All the sounds were of moderate volume and consistent across the face. 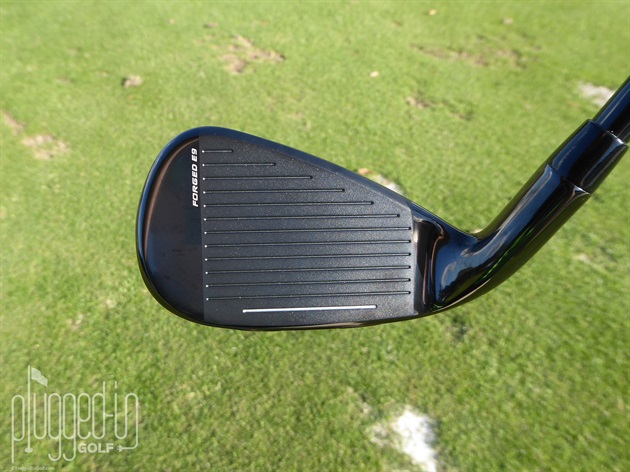 Atypical of SGI irons, the Cobra T-Rails provided some feedback in the hands.  Center struck balls gave that desired flushed feeling, and you could tell when the location drifted – but nothing harsh. 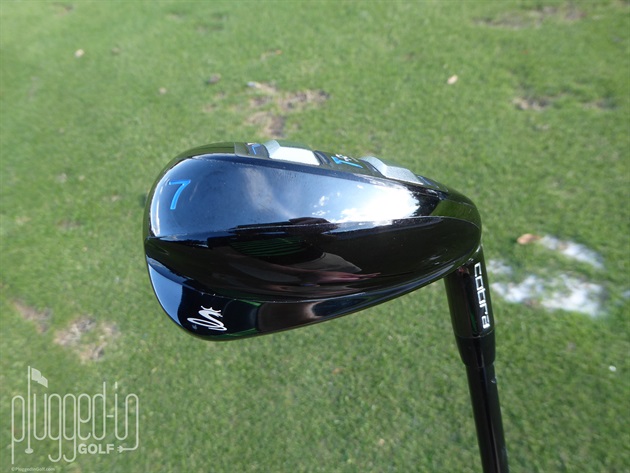 Looking back over my field notes, my first entry was “high and long” which was backed up empirically by data collected at Club Champion.  I had picked up about 10 yards across the set of T-Rail irons with a combination of high launch and low spin.  Another noteworthy observation was the consistency, both east-west and north-south – these clubs are forgiving.

The high launch is attributable to the hollow design which allows for a low, deep center of gravity.  Always difficult to quantify, my experience over the years with Cobra Baffler Rails does lead me to conclude they do aid in forgiveness by maintaining club head speed and stability during interaction with the turf.  To maximize ball speed, even on off-center hits, Cobra utilized their Forged E9 face technology that employs thinned pockets of high strength steel. 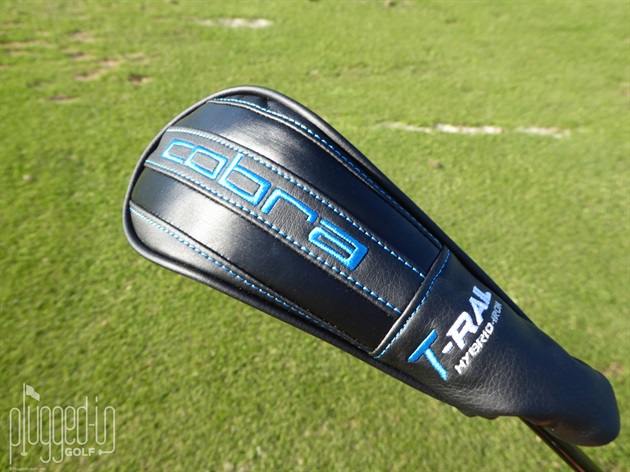 As a midsize grip player, it took a few sessions with the T-Rails to realize they come standard with Lamkin midsize grips.  If you’re used to playing standard size grips, give these a few rounds to see how you like them.  Many golfers find midsize grips provide for less tension in their arms allowing for a smoother, faster swing.  Check out our Golf Myths Unplugged on grip size HERE. 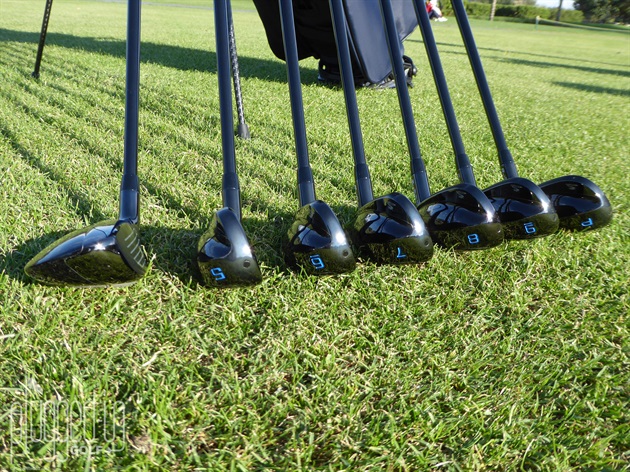 Whether you are a beginner or someone who has lost some swing speed, getting the ball up in the air easily evokes a feeling of accomplishment.   Watching the ball go far makes it fun.  Cobra’s T-Rail irons and hybrid deliver both while adding forgiveness.  And if you enjoy icing on your cake, the Cobra Baffler Rails will give you the confidence to play out of any lie. 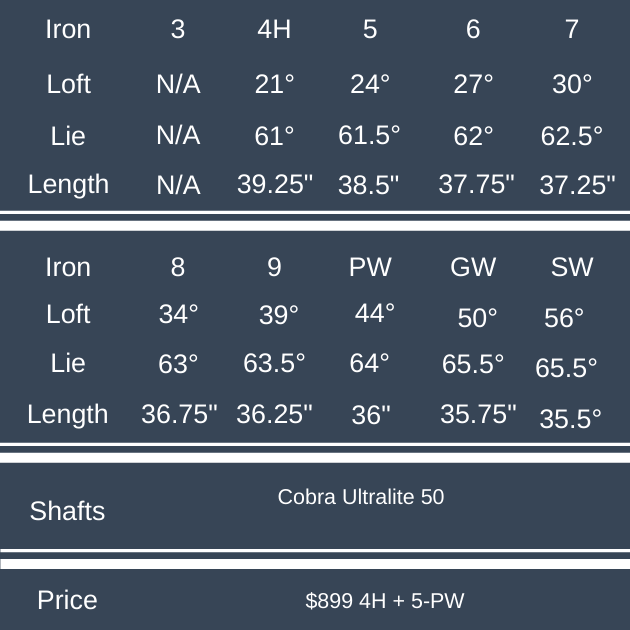