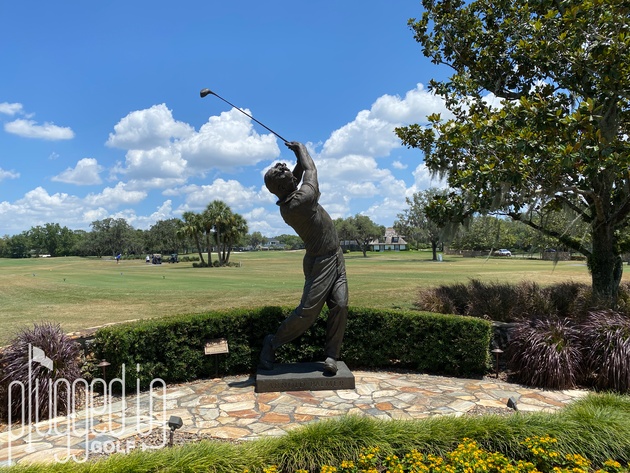 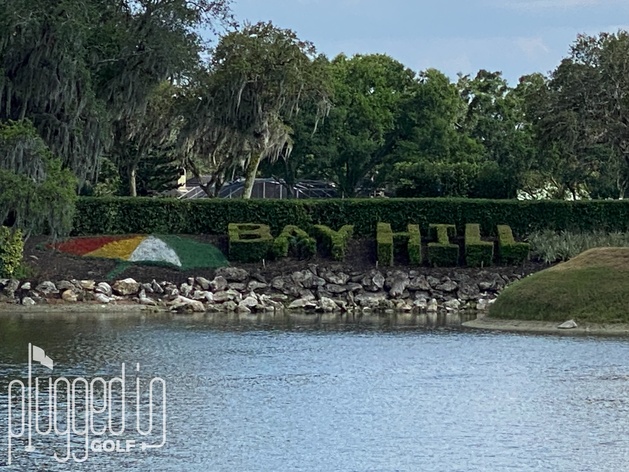 One hardly needs to be a PGA Tour junkie to be familiar with Bay Hill.  From the tournament’s iconic host to its impressive list of former champions (including Tiger Woods eight times!), this is one of the most famous venues in golf.  But does it deserve to be on your personal bucket list?  Plugged In Golf took a trip to find out. 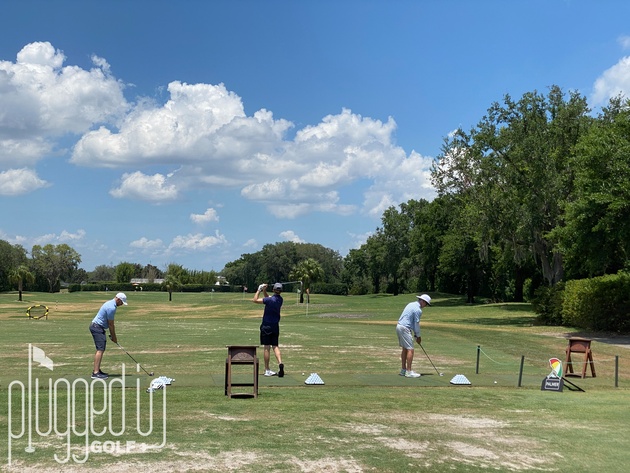 The driving range at Bay Hill is solid if unsurprising.  There’s a lot of space for hitting off grass, and a strip of artificial turf as well.  Pyramids of Callaway golf balls encourage you to hit until you’re happy.  The one exceptionally cool feature is the spot on the end of the range reserved for Mr. Palmer, which you can see above. 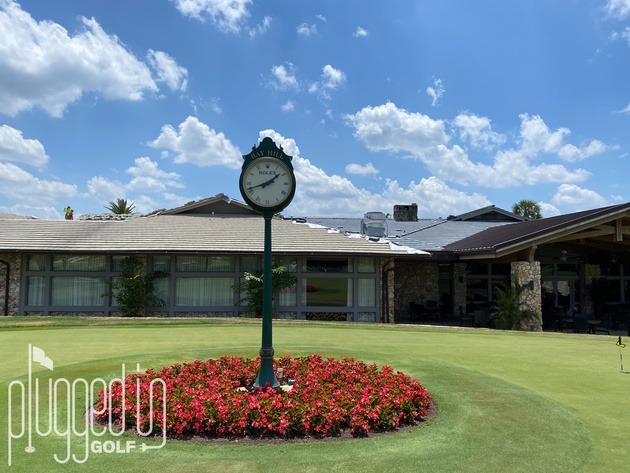 When it comes to the short game, Bay Hill has a lot more to offer.  Immediately off the lodge, there’s a large putting green with the mandatory big green Rolex clock.  A short walk from there takes you to an immense short game area where you can practice bunker shots, chips, and pitches into multiple greens.  If you like to practice your short game, you will love this space. 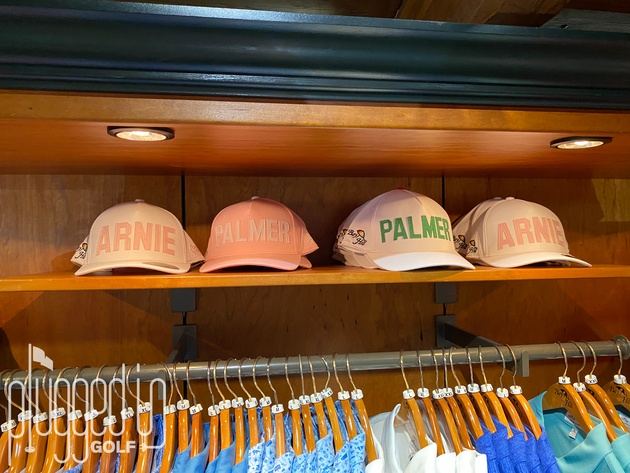 In this category, Bay Hill has some high highs and some low lows.  To start with the positives, the pro shop at Bay Hill is pretty great.  I’ll assume that if you’re playing Bay Hill, you’re a fan of Mr. Palmer, and you’ll be quite pleased with the array of hats, shirts, and other umbrellaed gear you can buy.  Also, the clubhouse has fantastic memorabilia – photos, signed guitars, trophies – that fans will love.  Finally, the people who work at Bay Hill were all very friendly and helpful. 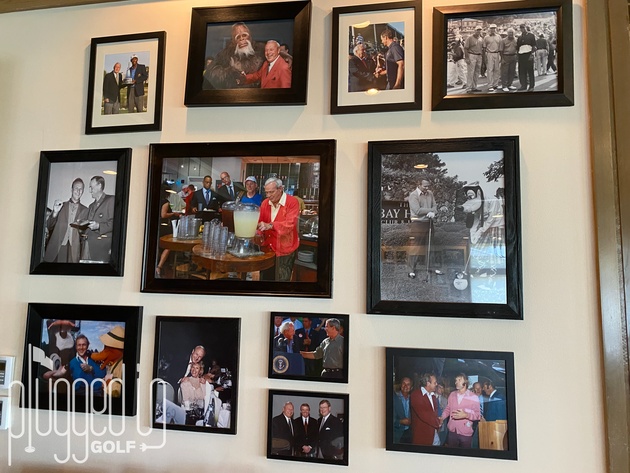 On the other side of the coin, there are ways in which Bay Hill feels like its coasting on name recognition and failing to deliver a premium experience.  For one, the carts lack GPS systems.  Bay Hill was the only course on our trip where this was the case.  Also, there was no drinking water on the course.  In Florida’s heat, that’s a pretty big issue.  Finally, the halfway house was closed for the day when we made the turn, compounding the water issue.  With a green fee in the neighborhood of $200, I think it’s reasonable to expect more. 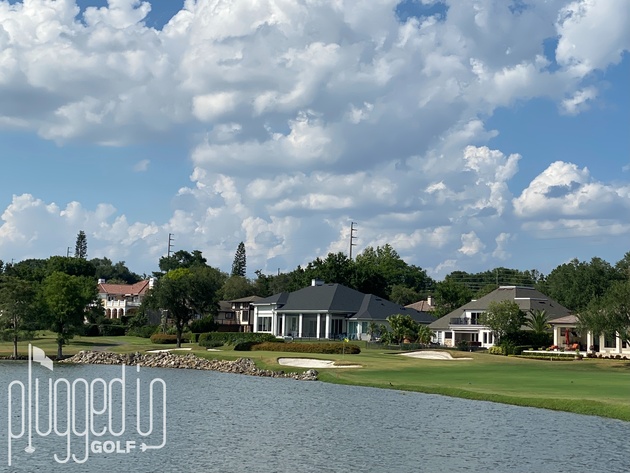 Bay Hill looks very different during regular play than it does during tournament play.  In fact, it’s kind of jarring.  Due to the grandstands, the houses that surrounds Bay Hill aren’t prominent during the broadcast.  When you play Bay Hill in normal conditions, you realize that they are right on top of the course.  There are some holes where they’re less prominent, but they’re never far away.

The other thing that struck me about Bay Hill is how flat it is.  There is some elevation built into most holes, but the course is largely flat.  Most of the course’s beauty and visual interest centers around the water holes, which are numerous. 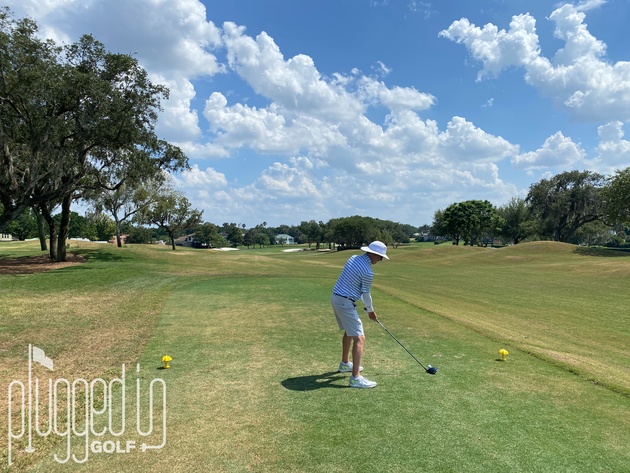 Most of the tee shots at Bay Hill will have you trying to fit your drive in between hazards.  Whether it’s sand or water, there are plenty of obstacles in the fairway to rattle your nerves.  The fairways are narrow to average in width, but they typically get pinched in the prime landing areas – assuming you’re playing the correct tees.  It’s also worth noting that there are a number of slithery fairways, particularly on the shorter holes.  This gives a big advantage to those who know the course and makes the lack of GPS in the carts even more of a downer. 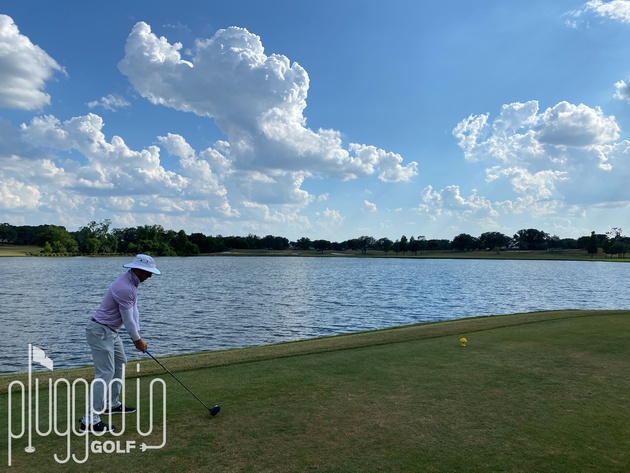 Unless you get out over your skis with tee box selection, Bay Hill is not a course that will beat you up with length.  In fact, our group’s shortest hitter posted the lowest round of the day.  It’s much more important to keep the ball in front of you because there are numerous holes where you can end up in someone’s backyard without hitting a particularly poor drive.  On that note, I’d like to thank a Bay Hill homeowner who was kind enough to come out of her backyard enclose to help me locate a ball in her yard.  It was the closest I’ve ever felt to being a PGA Tour player.

From the right tees, I think the first shots are the most fun part of a round at Bay Hill.  The variety is quite good with a mix of short and long holes and some risk/reward gambles.  For anyone wondering, no, I did not actually take the Bryson line on #6, above.  Purely posing for the ‘gram. 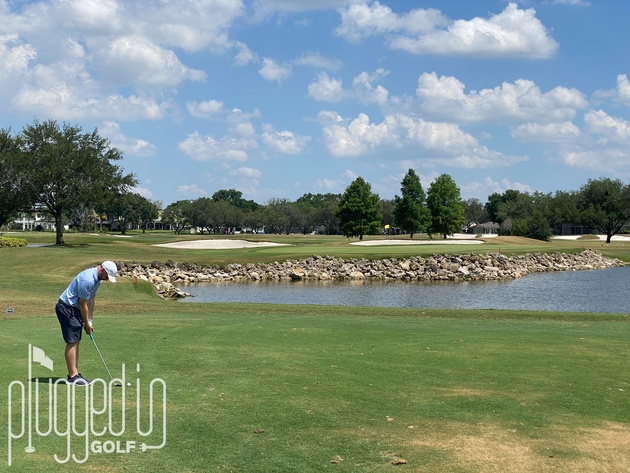 While there is a nice variety to the tee shots at Bay Hill, the approach shots are little more monotonous.  The greens are average to slightly below average in size, and each one is guarded by at least two (but often three or four) sand bunkers.  There’s also plenty of water in play, as you can see above.  If you’re not striking your irons well, your score can get ugly in a hurry. 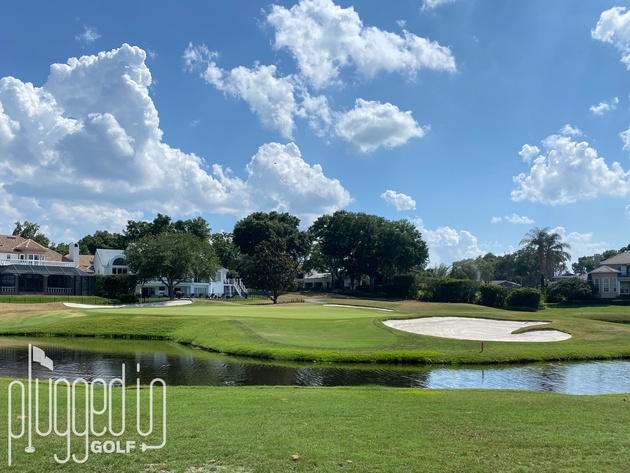 In this category, Bay Hill’s biggest strength is the par 5s.  #16 in particular provides a very exciting risk/reward choice with your second shot.  #6 and #12 aren’t nearly as enticing, but the lack of an easy lay up makes you consider a shot you otherwise wouldn’t. 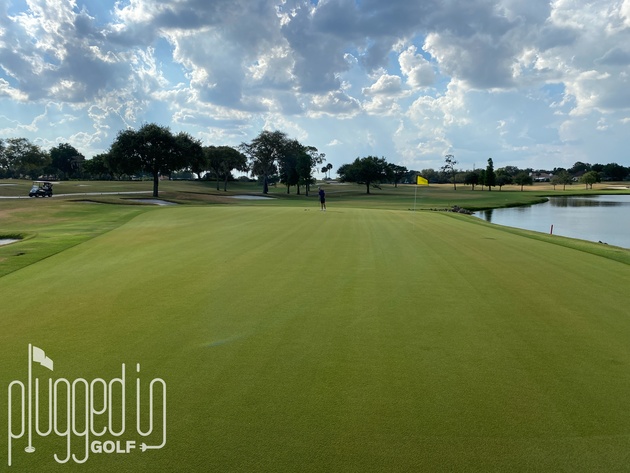 To players who are used to the wild contours favored by many modern architects, the greens at Bay Hill will look very mild.  There are no rollercoaster breaks or greens divided into tiers with dramatic elevation changes.  However, that doesn’t mean they lack break or challenge.  Despite their benign appearance, the putting surfaces at Bay Hill yield hardly any straight putts.  If you have the opportunity to take a caddie or lean on a knowledgeable local, do it. 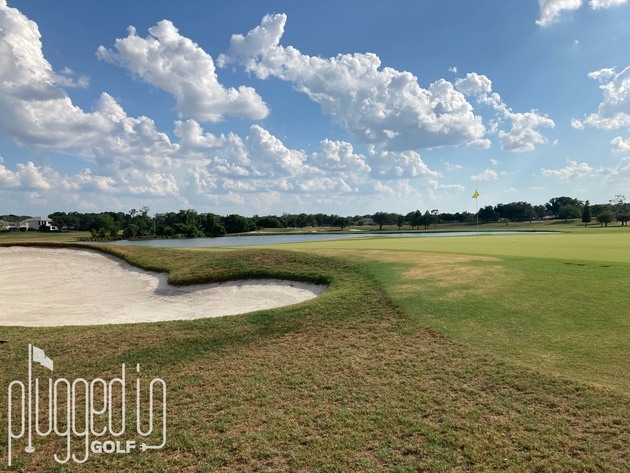 The primary defense around the greens is sand.  While many of the greens are slightly elevated, there aren’t many challenging contours if you miss the putting surface.  When we played, the rough was quite light, so putting through it was a viable option.  If you make smart choices with your approach shot, your short game shouldn’t get too much of a workout at Bay Hill. 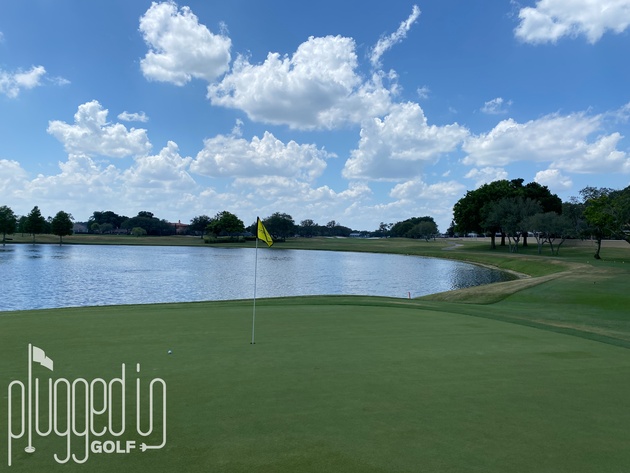 As I played Bay Hill, my mind kept slipping back to The Heather at Boyne Highlands [review HERE].  It seems like this design was heavily influenced by the Robert Trent Jones school of design, primarily in its heavily bunkered greens. 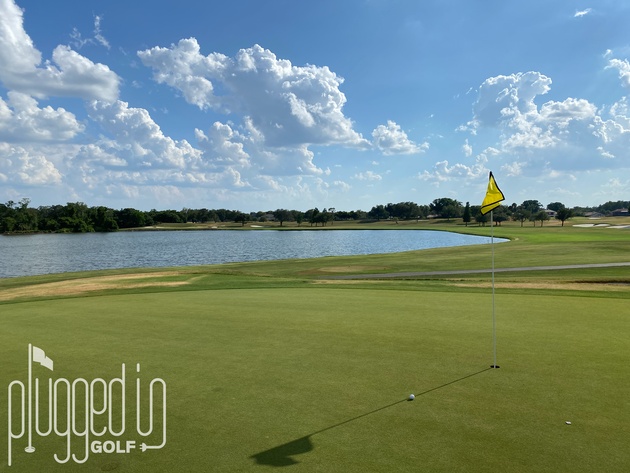 Overall, Bay Hill struck me as a course that could yield good scores to strong ball strikers and those with some local knowledge.  A couple trips around the course would shed a lot of light on how to play the shorter par 4s.  That said, it’s a course that’s not afraid to clutter your card with penalty shots.  With significant water hazards on seven holes, you need to make your mistakes at the right times to score well. 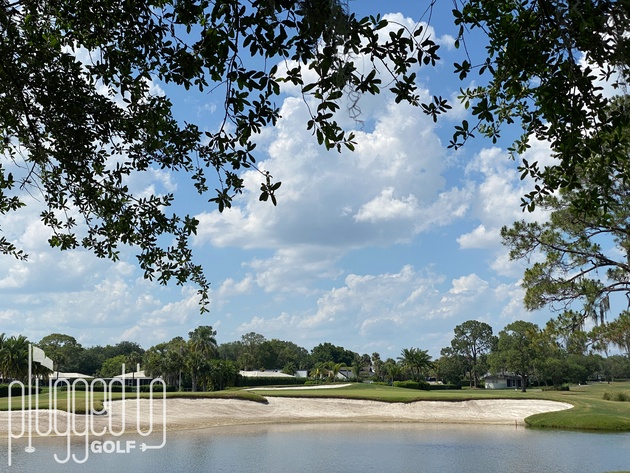 A very beautiful hole, and one of the few where the green is open to something other than a high, accurate approach shot.  This was a favorite for both Dylan and me.

This entire hole will be determined by your tee shot.  If you’re tentative (or if you drown your drive), you’re going to have a very tough approach, and you’ll be writing down a big number.  However, if you summon the nerve to hit a strong drive on an aggressive line, you can easily have a wedge into this green.

Far and away the shortest par 5 at Bay Hill, the water short of the green will test your nerves if you want to try for an eagle.  This would be a fun hole at any point in the round, but having it so late, when a match may be in the balance, makes it even better. 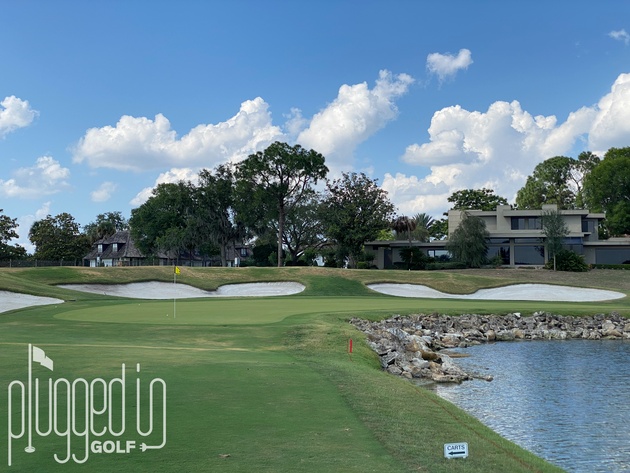 The hole itself is fine – a very stout closer – but it earns its spot here because it’s been the backdrop for so many great PGA Tour (read: Tiger Woods) finishes.  The square footage of this green is deceiving because there is no pin location that feels easy.  No matter where they put the cup, you’re only a few paces from a wet landing or a very scary bunker shot. 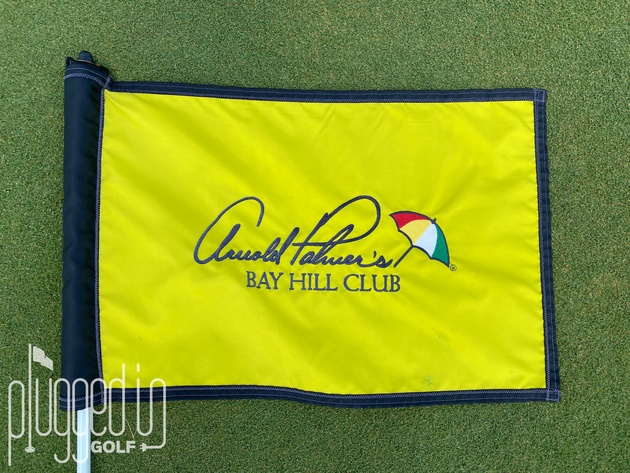 For the Arnold Palmer fan or the PGA Tour junkie, Bay Hill is a course that definitely needs to be checked off the bucket list.  However, if you’re looking for strong value or a course that the mid-handicapper can succeed at, there are better options in Orlando’s strong golf scene.