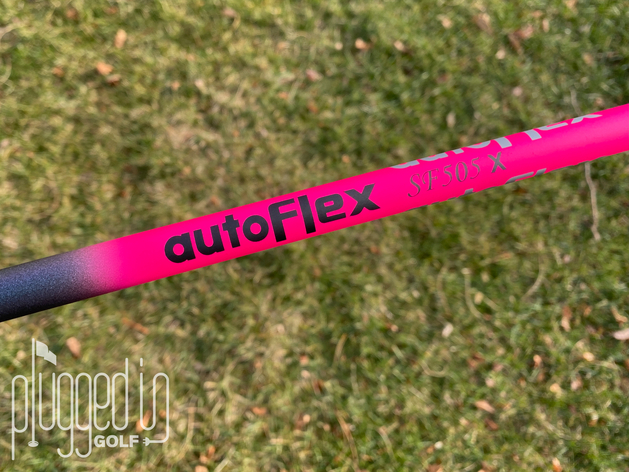 The Autoflex shaft is one of the most-hyped shafts of the moment.  Light and very active.  Surprising consistency.  Boosted my club head speed. 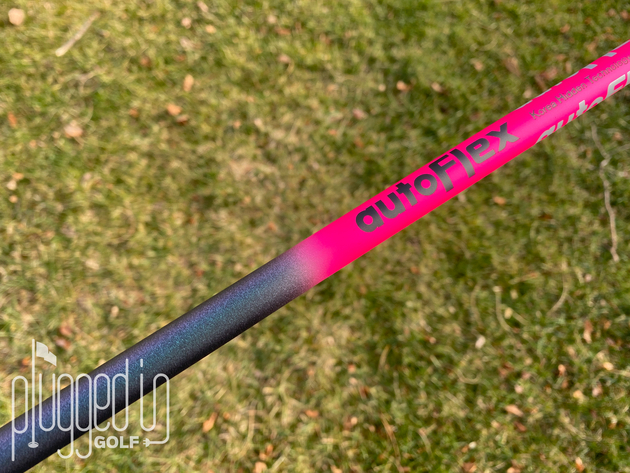 The Autoflex shaft has been an object lesson in the power of the internet to build hype.  Despite precious little “real” information being available, the buzz around Autoflex shafts has grown to an astounding level, leaving my inbox drowning in demands for a review.  I was finally able to get my hands on one, and, in many ways, the results lived up to the hype. 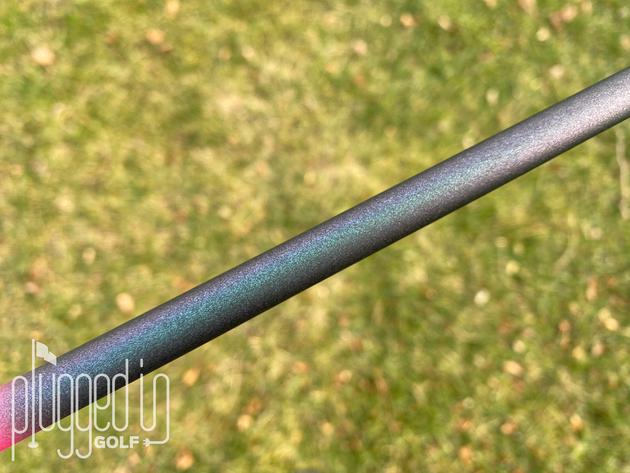 The Autoflex shaft comes in two bold color choices: pink and rainbow.  As you can see, I tested the pink version, which has strong Bubba Watson vibes.  The middle is a bright, bubble gum pink with “autoFlex” branding wrapped around in black, gold, and silver.  Both the tip and butt sections look black, but they have a subtle iridescence which is very cool. 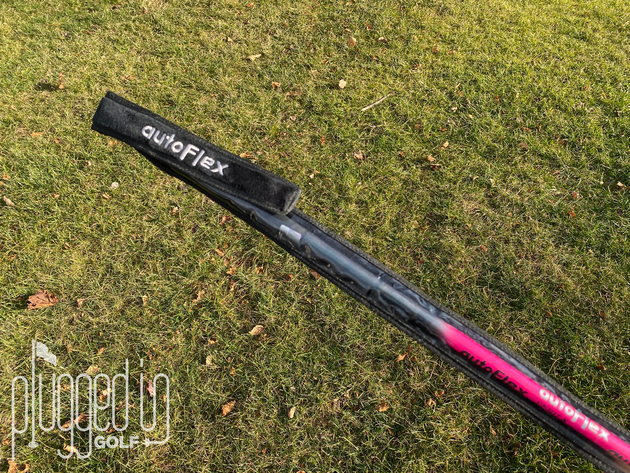 If the pink isn’t bold enough for you, check out the Autoflex Instagram account (HERE) to see the rainbow finish.  It’s truly one of a kind and not for the traditionalists.

I’ll also add, under the heading of “Fun But Not Really Relevant,” that the Autoflex shaft comes in a cloth and plastic quiver.  It’s an unusual little detail that I liked if only for its novelty. 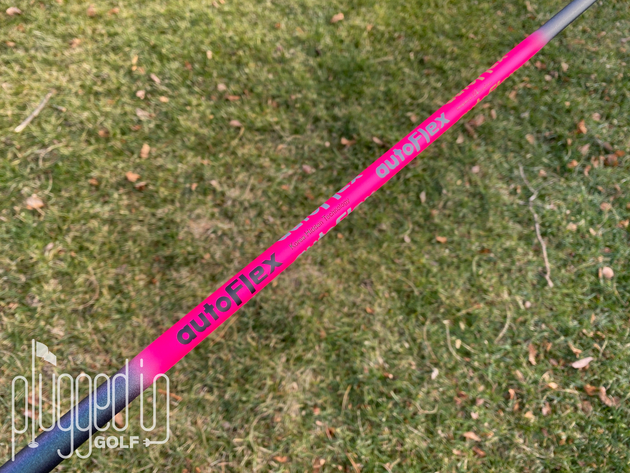 I’ve swung a lot of driver shafts, but I can’t think of a single shaft that feels faster through the ball than the Autoflex.  During the swing it is smooth and very active.  I didn’t feel a single kick point; it was more like the Speeder-style whip crack on steroids.

Due to the combination of light weight and active profile, every swing felt effortless and fast.  It’s a feeling that I found addictive.  Combine the feel with the results – which I’ll get to next – and it became a shaft I just wanted to keep swinging. 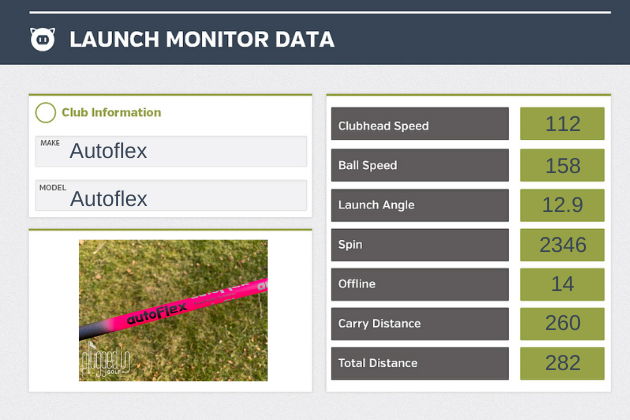 Before I get into my experience with the Autoflex shaft, I think it’s worthwhile to examine the claims that the company is making.  The topline claims are that a lighter, more flexible shaft will lead to more club and ball speed while being easier on your body.  They also claim that, due to their technology, they can get this increase in distance without losing accuracy.

Digging through their FAQ, I also found that they make two suggestions to maximize the Autoflex shaft.  First, they suggest building your driver to a swing weight of D0-D2 because higher swing weights “may cause the club head to wobble on the downswing transition.”  Second, they encourage you to “[avoid] the aggressive/violent transition.”  I can speak to this second one anecdotally: when I used my 110% swing, the shaft felt very loose and unpredictable.  Interestingly, the results were pretty good, but the feel made me uncomfortable.  A smoother swing was definitely rewarded with this shaft. 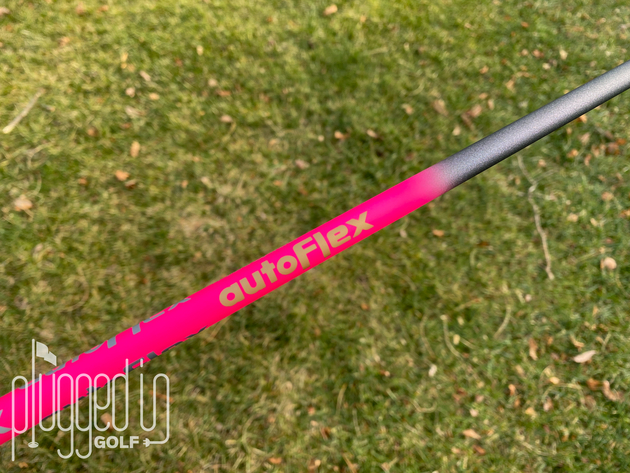 On to the results.  Did I see my club head speed go up with Autoflex?  Yes.  I hit peak club head speeds I have not hit in a long time, and even my easy swings were very fast (for me).  The “but” is that my ball speeds were high, but not higher than I’ve seen with other shafts.  I’m looking forward to experimenting more with this shaft to see if a lighter swing weight can stabilize the head and improve the smash factor.

In terms of direction, the Autoflex primarily wanted to hit draws.  The curve was larger than I would prefer, but it was very consistent.  Again, a lighter swing weight or less aggressive transition might help to move that toward the center. 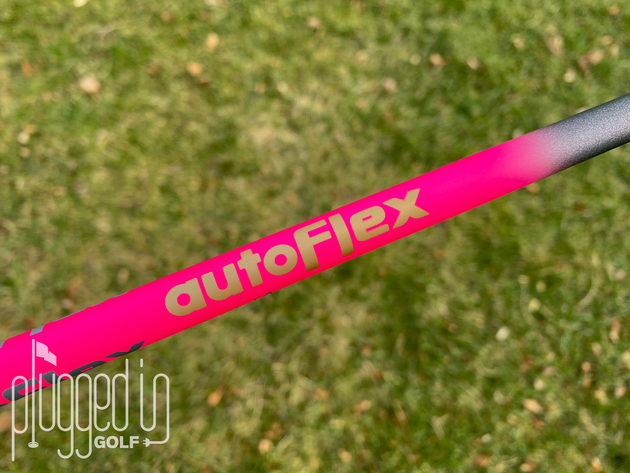 Here’s the big question that I’m left with: is the Autoflex shaft’s Korea Hidden Technology something in the shaft itself or is the technology their ability to get ego-driven golfers to try a lighter, more flexible shaft?  I genuinely don’t know the answer to that question, and, until the Autoflex is available from more fitters, it’s an expensive buy-and-try at $790.

All that said, I found the Autoflex to be incredibly fun to swing, and it delivered on the promise of more club head speed.  I look forward to tweaking it a bit to see if I can find more consistency and speed with a lighter swing weight.