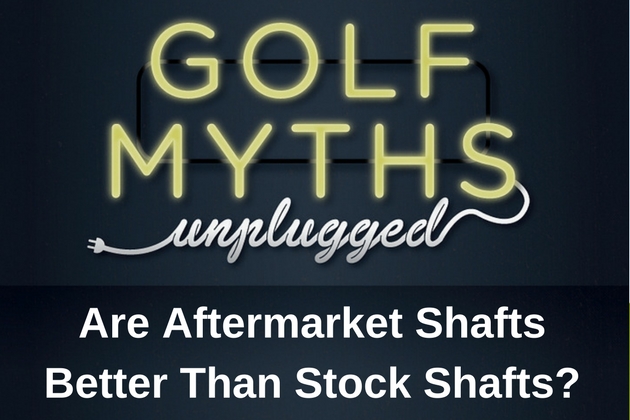 Are Shafts Upgrades Worth the Big Money?

One of the longest-running equipment debates revolves around the quality and “legitimacy” of stock shafts.  There are more theories than we could possibly list here: certain brands use “real deal” shafts, others don’t, certain models are “real,” others are “watered down.”

While the debate about stock vs. aftermarket is unlikely to go away completely, we wanted to add some data to the conversation.  We tested two stock shafts against their aftermarket counterparts to evaluate some of the most common myths.

Myth #6 – Stock shafts are the same as aftermarket shafts

We brought together five golfers to test these myths.  Each player hit seven shots with each of four shafts.  For the purposes of this test, we will refer to them as Shaft A Stock, Shaft A Aftermarket, Shaft B Stock, and Shaft B Aftermarket.  Each shaft was the same weight and flex – 60 grams, stiff flex.  Every shot was measured on Trackman.

This is not meant to be a test of a specific brand’s shafts, stock or aftermarket, so we will not be publishing the names of the shafts that we used. 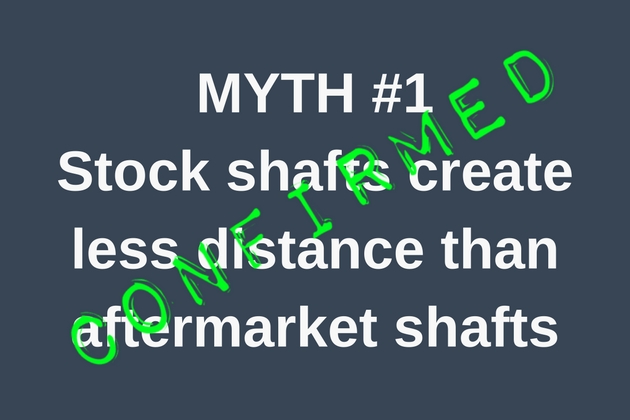 The data that came out of this test was pretty shocking.  We looked at distance from a variety of perspectives, and stock shafts got beaten on every one.

We then looked at carry distance.  From this perspective, the stock shafts were slightly more successful, winning 3/10 trials.  However, when we look at the magnitude of the wins, the scale tilts hard toward aftermarket shafts.  Stock shafts won their trials by an average of 1.76 yards, a negligible amount.  Aftermarket shafts won their seven trials by an average of 9.63 yards.

Finally, we looked at total distance.  The aftermarket shafts won 8/10 trials by an average of 10 yards.

In short, the data we collected shows that aftermarket shafts create more distance than stock shafts. 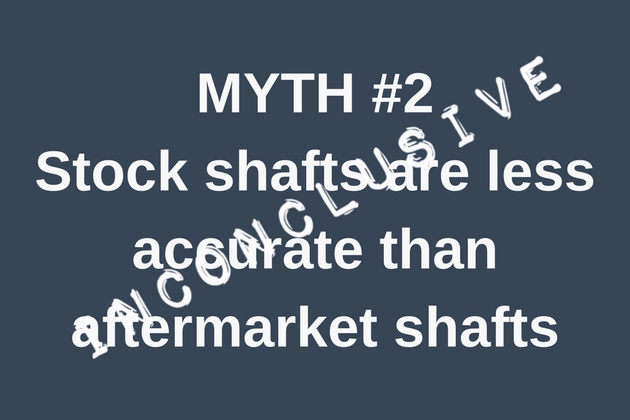 When we looked at accuracy, the picture was much more muddled.  The stock and aftermarket shafts had an even 5 to 5 split when it came to offline averages.  Average improvement was almost identical as well – 6 yards for aftermarket, 5.6 for stock.

We also looked at accuracy in terms of the dispersion – the distance between the furthest shot right and the furthest shot left.  By this metric, aftermarket shafts did perform better, winning 7/10 trials.  While this metric is interesting, it can be disproportionately affected by one bad swing.  As such, we weighted average offline more heavily and deemed this myth “Inconclusive.” 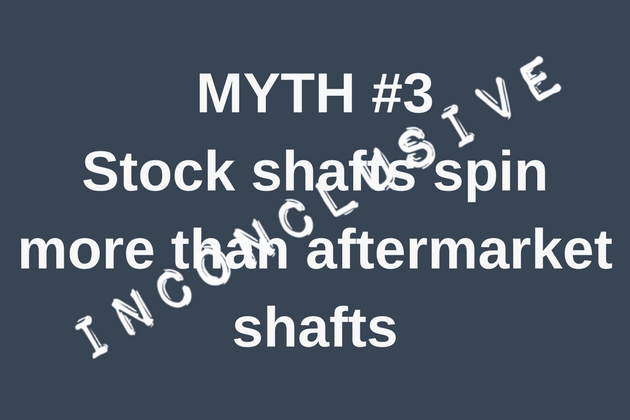 One of the major complaints that the forum folk have about stock shafts is that they’re “spinny.”  Our data on this is mixed.

While, on the whole, aftermarket shafts produced an average of 150 RPM less spin, the mixed results make this another inconclusive myth. 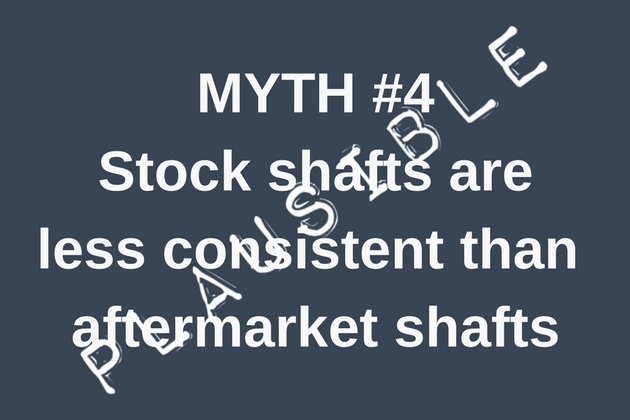 Can consistency be purchased by upgrading to an aftermarket shaft?  Our data leans toward “Yes.”

To judge consistency, we looked at the left-right dispersion that we mentioned earlier and also the gap between each player’s longest and shortest carry distance.  In both cases, the aftermarket shaft performed better 7 out of 10 times.  In averaging the whole group, the dispersion was 7.6 yards tighter from left-to-right and 6.9 yards tighter in distance.

Because some of our players posted data that was strongly counter to this myth, we can’t confirm it, but we will rate it as “Plausible.” 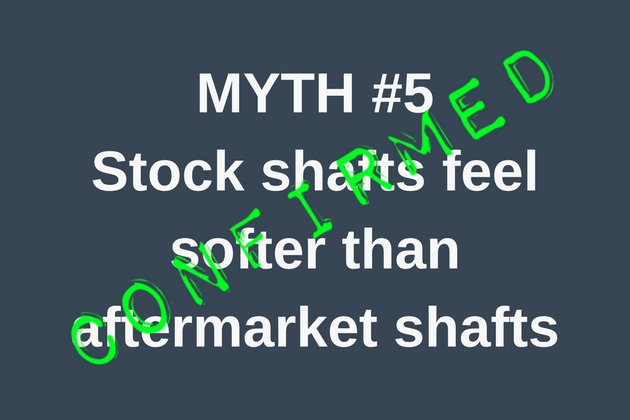 Our testers were definitive about this: the stock shafts that we tested felt nothing like the aftermarket versions.

With both Shaft A and Shaft B, our testers, to a man, said that the stock version felt like it was much softer and had much higher torque.  Some people would describe this as being more “whippy,” “active,” or “lively.”

It needs to be emphasized that this is not a good or bad thing.  Some players need a softer shaft for performance reasons, and others prefer the feel of a softer shaft. 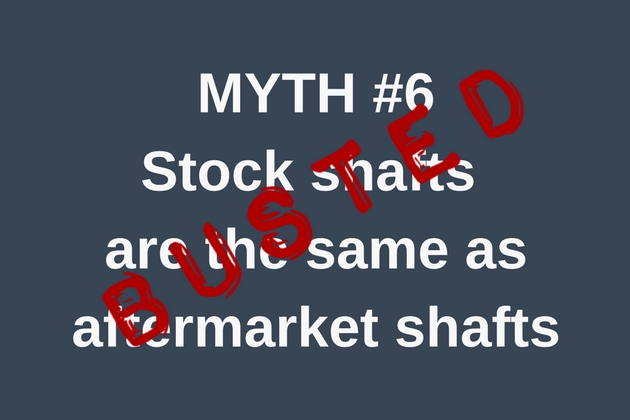 At this point, it’s fairly clear that, leaving aside issues of “better or worse,” we can conclude that stock shafts are not the same as their aftermarket counterparts.  From feel to performance, the differences were both measurable and noticeable.

Limitations of This Test

This test only included two stock shafts and their aftermarket counterparts.  There are many, many more that could be tested, and the results of those tests could be very different.  While we believe that similar trends would be seen with other shafts, our conclusions only apply definitively to what we tested.

Stock shafts get a bad rep among the golf equipment obsessed.  For many golfers, they perform very well, and, in some cases, they outperform their aftermarket counterparts.  That said, just because they have the same name as an expensive aftermarket shaft does not mean they are the same.  As always, we strongly recommend that you work with a trusted club fitter to find the equipment that will maximize your performance on the course. 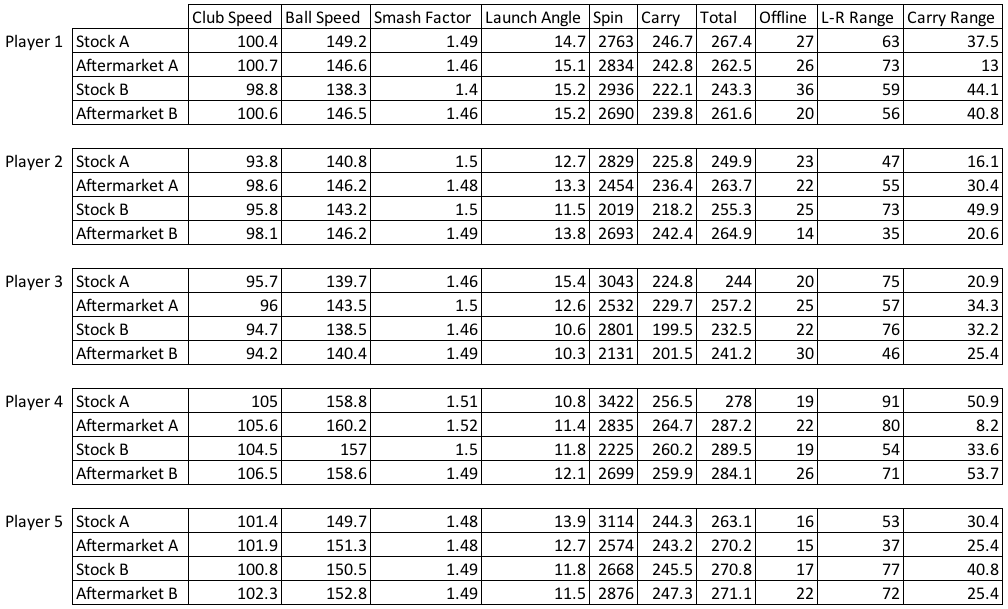