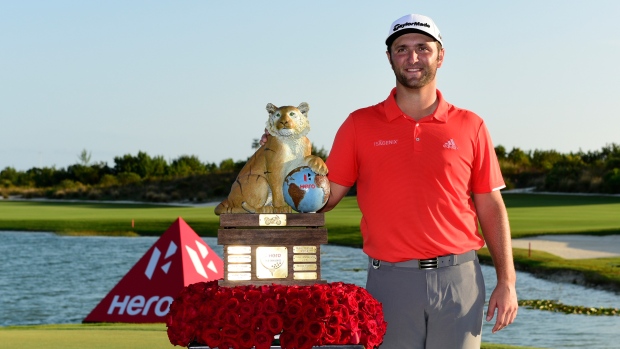 Rahm Wins in the Bahamas

Nassau, Bahamas – Jon Rahm closes out a flawless final round to win the 2018 Hero World Challenge.  The limited-field event, which is held at Albany Golf Club in the Bahamas, benefits the TGR Foundation, the Tavistock Foundation, and the Bahamas Youth Foundation.

Rahm finished with a four-day total of 20-under par (268) and is the first Spaniard to win this event.  Fellow competitors Tony Finau and Henrik Stenson began the final round tied with Rahm but could not keep up.  In an interview after his round, Jon stated that it was the best ball-striking day he’s ever going to have and that was certainly true as he put up 7 birdies and no bogeys.  Tony shot a 3-under 69 to finish in a distant second place at 16-under par while Stenson dropped back to solo-fourth with a final round 71.

In his first event since “The Match” in which he lost to Phil Mickleson in a playoff, Tiger Woods did not play well in his own event, finishing 17th out of 18 players with a four round total of 287 (1-under).  Defending champion Rickie Fowler finished T5 shooting 13-under for the week.

The PGA Tour’s next stop will be the 2019 Sentry Tournament of Champions in Hawaii where Dustin Johnson is the defending champion.