The Pebble Beach Pro-Am is always a fan favorite featuring top professionals on Tour teaming up with some of the most popular athletes, actors, comedians, and entertainers in pop culture for a fun-filled team competition. Some of this year’s notable celebrities included singer/songwriter Justin Timberlake, Packers Quarterback Aaron Rodgers, and the always-enticing comic, Bill Murray.

Amongst all of the excitement, stealing the show this weekend was, (now) 3 time PGA Tour Winner and 447th world-ranked, Vaughn Taylor. With his TaylorMade stand bag in tow, one could have easily mistaken Vaughn for one of the amateurs in the field. That is, until they took a look at his scorecard. Taylor carded 5 birdies on the back 9, including 4 straight, en route to a final-round 65 and tournament total of 17-under par, finishing one shot ahead of 4-time Pebble Beach Pro-Am Champ, Phil Mickelson.

The victory at Pebble Beach this past weekend marked Taylor’s first win on the PGA tour since 2005, where he won back to back Reno Tahoe Opens (2004 and 2005). Outside of the PGA tour, Taylor has registered 4 wins on the NGA Hooters Tour and 1 win on the Nationwide Tour. Taylor has not been a fully exempt player on any tour circuit since 2012, but that’s all about to change. With his win at the AT&T Pro-Am, Taylor will not only become fully exempt on the PGA tour for the next two years, but has also earned himself a spot to play in this year’s Masters Tournament in April. When asked what that means to him, Taylor responded with “Playing in the Masters is my Super Bowl.”

Phil Mickelson stood just a few yards short of the green on the 545-yard par 5, needing to get up and down to force a playoff with virtual unknown, Vaughn Taylor. I would put money on it any day of the week that Phil would convert and would be willing to say that he gets up and down from that very spot 99 of 100 times.

Phil seemed to play very conservative on his chip, and left himself a 5 footer for a birdie, which would get him to 17-under and force a playoff. Phil, Taylor, and the rest of the golf world had to assume he would make it. He was 23 of 23 from inside of 6 feet on the week, so there was no doubt that he would force the playoff. But today just wasn’t Phil’s day. His 5 foot putt lipped out on the high side and Phil had to settle for second place.

Mickelson has not won on tour since his Open Championship and Muirfield in 2013, over 2 and a half years ago. It has been 930 days (as of Sunday) and counting since Mickelson’s last PGA Tour victory. 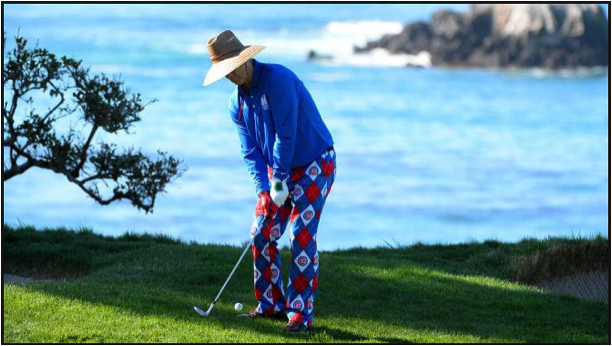 Pro-Am Outfit of the week

Every year, the celebrities in the Pebble Beach Pro Am never disappoint when it comes to their outfit selections, and this year was no exception. From Larry The Cable Guy’s sleeveless camouflage “shirts,” those yellow TaylorMade bucket hats from a few years back, and Jim Harbaugh’s famous khakis, there’s always something to catch your eye. This year’s winner? Bill Murray’s Chicago Cubs Argyle pants with the straw hat.