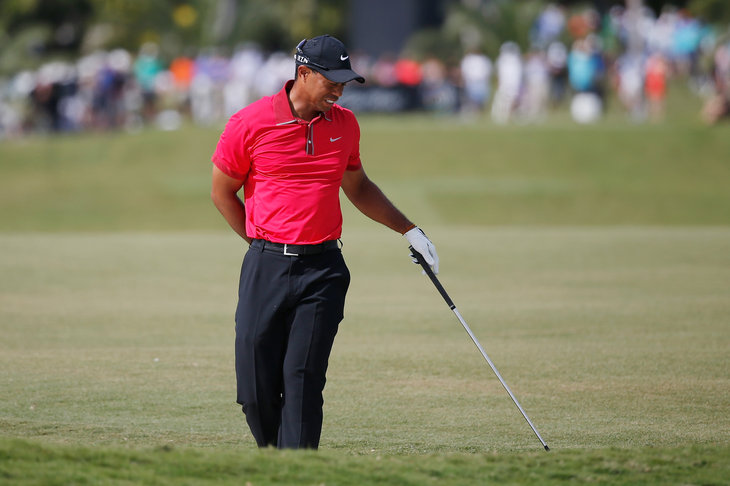 Golf suffered a major blow yesterday with Tiger’s announcement that he will miss the 2014 Masters.  Or did it?

Today we unveil a new series, Matt v. Bill, where Matt and Bill debate the biggest issues in golf (for today’s debate we could have called it “Resident Tiger Worshiper v. Tartan-Wearing Anglophile,” but we felt that was a little wordy).

Is it good for golf that Tiger is missing the 2014 Masters?

Matt: The answer to this is a resounding NO, it’s not good for golf that Tiger’s missing Augusta.  This is arguably golf’s biggest stage, and it needs its biggest star.    (Off camera: I’m starting really general, obviously and trying to limit my points to 2-4 sentences for readability)
Bill: I agree that this is golf’s biggest stage, but it’s good for golf that Tiger isn’t in the field for about a million different reasons.  First and foremost, since his “return” in 2009, it seems like everyone just assumes it’s his tournament to lose before he even drives down Magnolia Lane.  This year, not only do we get to skip the Tiger-centric coverage, but we have the opportunity to focus the attention on other noteworthy players like Adam Scott and Jason Dufner, or possible first time major winners like Lee Westwood, Jason Day, or Ian Poulter.
Matt: All the players you name are noteworthy, but none of them are needle-movers.  There’s a reason the TV coverage dotes on Tiger: people watch it. And that’s what golf needs: eyeballs on the screen.  People actively watching the Masters means more people thinking about playing golf, and that’s good for the game.
Bill: If we’re talking about the PGA Championship, I’ll give the needle movement to you all day, but this is the Masters.  Jim Nantz doesn’t need Tiger Woods to move the Masters/golf needle.  Plus, golf needs new heroes to be born at some point, and what better place than here?  What better time than now?
Matt: Good points.  The Masters doesn’t need Tiger to appeal to golf fans, but it does need Tiger to get the casual sports fan involved, and that’s who golf needs.  When it was booming, casual sports fans were playing golf.  Now they’re not, and we need them back.  That starts with Tiger.
Bill: Was Tiger never a new star?  Think about what he did for the game when he burst onto the scene as young cub (pun intended).  All we’re hearing about lately is the decline in recreational golf and the desperate efforts we’ve seen to jump start it.  We, the golfing community, need nothing more than the next Tiger Woods to emerge at some point and provide a fresh new spark.
Matt: There’s no argument that we need the next Tiger, but we don’t have him yet.  Much to Nike’s chagrin, Rory isn’t it.  Adam Scott isn’t it.  Dufner isn’t, Keegan isn’t, Poulter isn’t (much as you might hate to admit it).  The stage has been open for the last few years for someone to step up and show the charisma and the dominance to be Tiger’s heir, but no one has done it.  Ultimately, I believe that even an aging Tiger is better for golf than this committee of above-average-but-not-great players.
We’re almost out of time, do you want the last word?

Bill: I think that’s a fair point, but at some point we have to hope a dark horse emerges, and it will be even better if it’s some kid we never expected.  I think we can both agree that even with Tiger’s absence, there will be great story lines and the Masters will still be exciting for anyone to watch.  The bigger story we should have debated, “Will the Masters survive without the Eisenhower Tree?

What Do You Think?

Is Tiger’s absence at Augusta good or bad for golf?  Tell PluggedInGolf what you think!