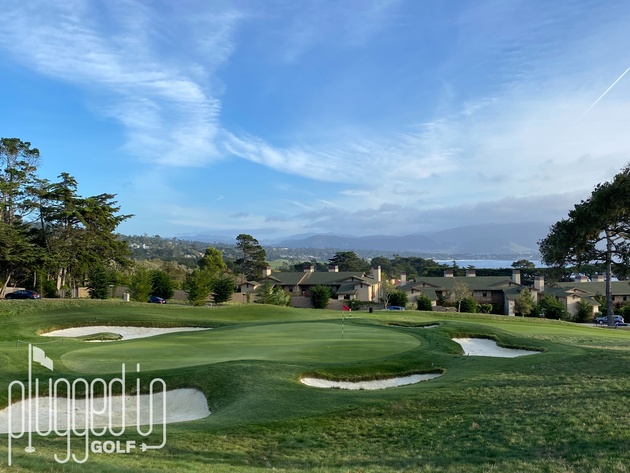 The Hay is the 9 hole par 3 course across the street from Pebble Beach.  Recently redesigned by Tiger Woods.  Accessible to players of all levels but a stout test of your wedge game. 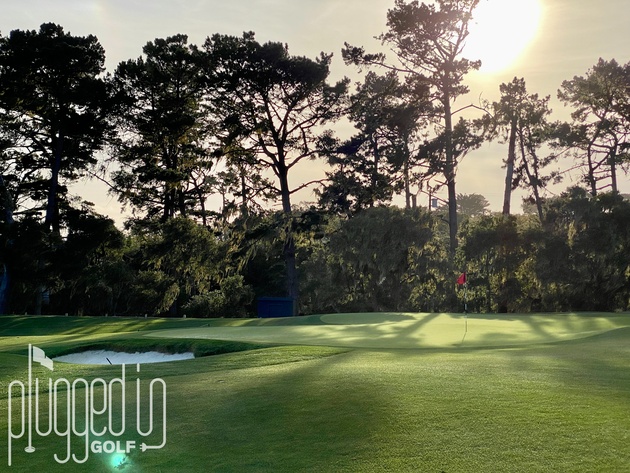 Originally built in 1957, The Hay was designed as a place where golfers young and old, serious and recreational, could come together to enjoy the game.  For 2021, The Hay was overhauled by Tiger Woods.  While it’s not likely to eclipse it’s big brother, Pebble Beach [full review HERE], the redesign puts fresh focus on bringing more new people to the game. 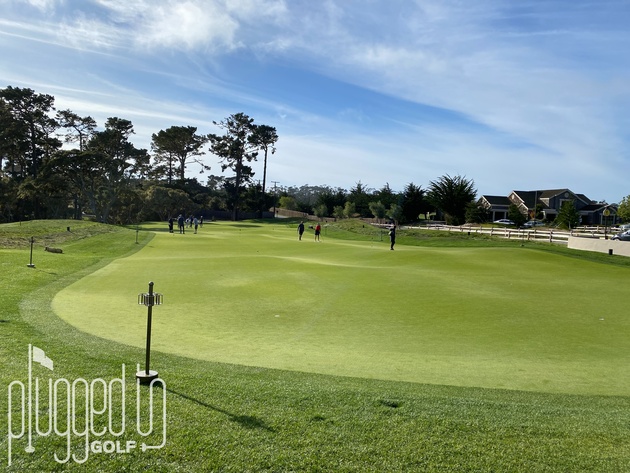 If you’re determined to post an all-time best score at The Hay, the Pebble Beach Golf Academy is located across the street.  They have an enormous driving range, large short game area, and a practice green. 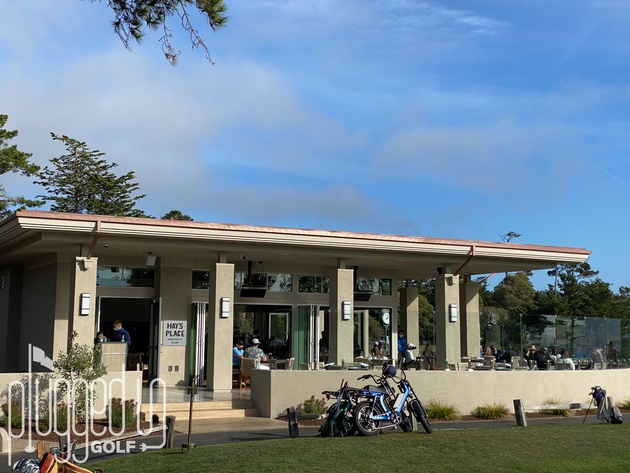 Golfers check in for their round at The Hay across the street at the Pebble Beach Golf Academy.  There you can also find a curated assortment of The Hay merch.  True to the vibe of the course, it’s heavy on t-shirts, light on the traditional pro shop fare.

The only permanent structure at The Hay is Hay’s Place.  This is a casual, Mexican-inspired restaurant that has great views of the course that extend all the way to the ocean.  With tons of outdoor seating and fire pits, it’s the perfect place to extend your stay at The Hay. 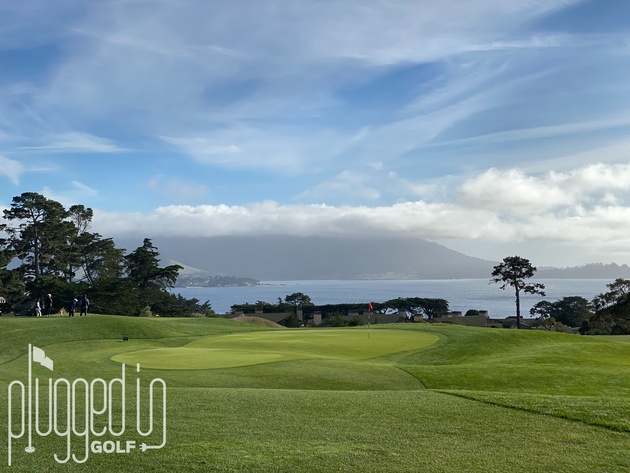 From almost every spot on The Hay, golfers are treated to panoramic views of Stillwater Cove.  The serenity of the Pacific Ocean is a perfect antidote to a bladed wedge shot. 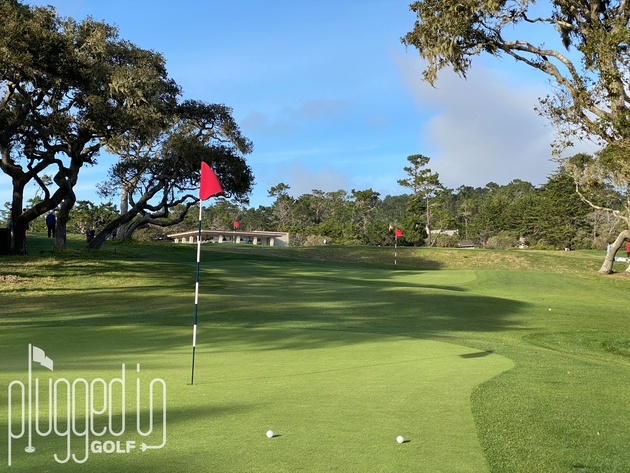 The course itself is extremely compact which leads to a great community feel.  You can see your fellow golfers, offer a thumbs up or golf clap for their best shots and receive the same. 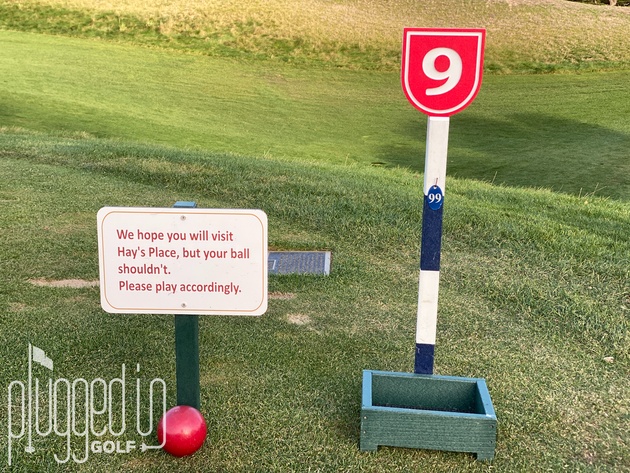 With the potential exception of #2 – a replica of #7 at Pebble Beach – every shot you hit will be under 100 yards.  The Hay helps to keep the pace brisk by hanging a tag with the day’s yardage on the tee marker.  Each tee box at The Hay has a small piece of artificial turf next to the yardage marker as the grass tees are only used on the weekends. 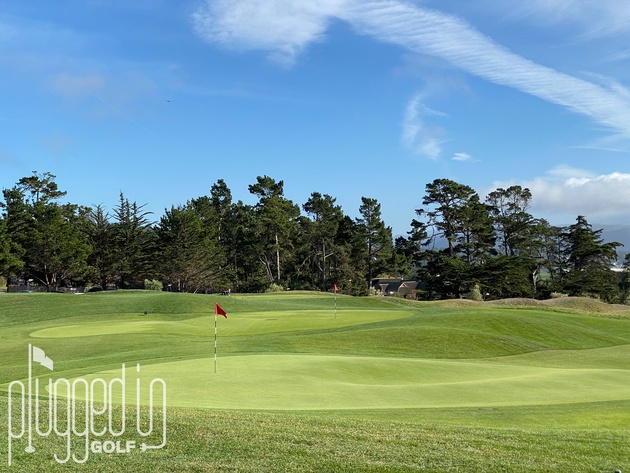 Precision is the name of the game at The Hay.  Check out the green above.  If your distance control isn’t precise to within two yards, you’re going to have a nasty putt.  False fronts are more common than not, and the greens aren’t that big to begin with.

There is talk in some of the promotional material about being able to play The Hay with a putter, but that’s a bit overstated.  It is possible, but it’s not recommended.  If you want to shoot anything near par, you’re going to need a high flying, precise wedge game. 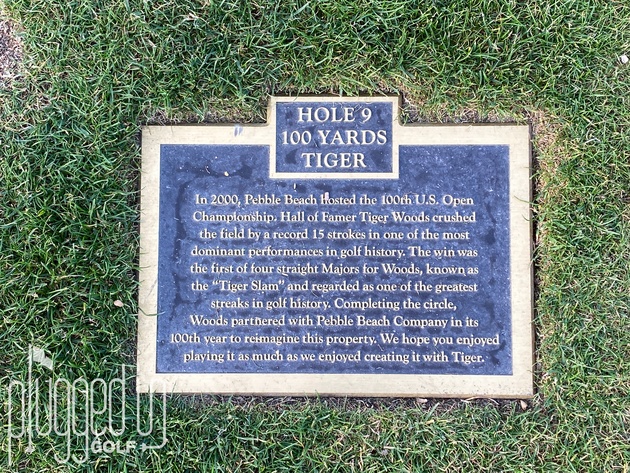 Finally, each tee box has a plaque with the hole’s name and some Pebble Beach history.  Whether you’re a golf historian or a newcomer, these are a great way to appreciate how special this place is to the game. 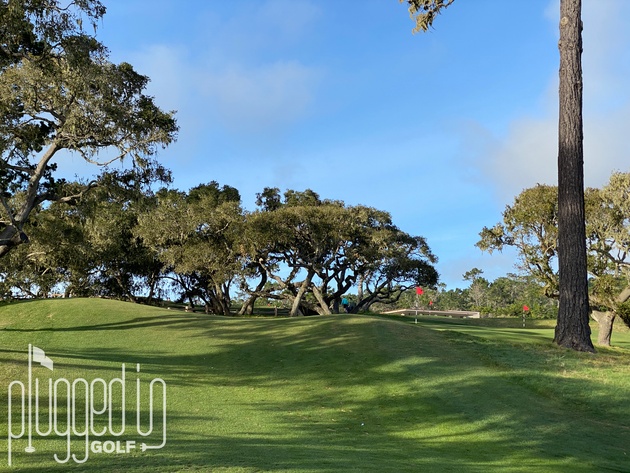 With the exception of #2, bunkers are not a major feature at The Hay.  This, along with the short length, keep it fun and accessible for more players.

Around the greens, you’ll find a fairly short fringe cut and very playable rough.  The fringe is definitely puttable, but it’s not so tight that you’ll be afraid to chip or pitch the ball.

The primary defenses are the contours in the surrounds and the greens themselves.  If you’re playing a ground game, judging the speed accurately can be tough when you’re going over a mound through two different cuts of grass.  Should you choose the aerial approach, you’ll need that aforementioned precision. 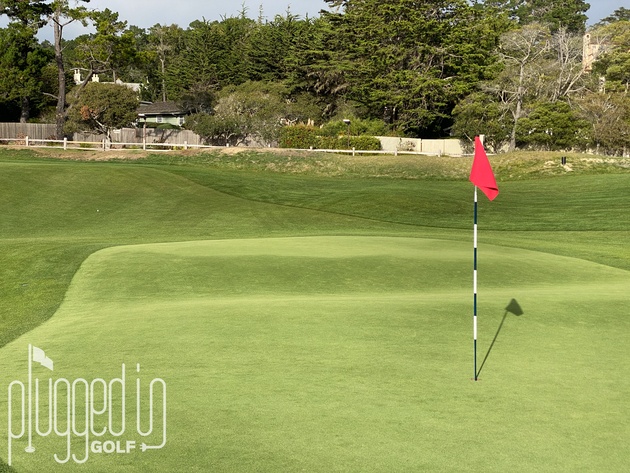 Virtually every green at The Hay has at least one major feature to contend with.  If you’re more than a few feet from the pin, you’re likely to be contending with a significant ridge or mound.  The one concession that The Hay makes is that the greens, though smooth, are not lightning quick. 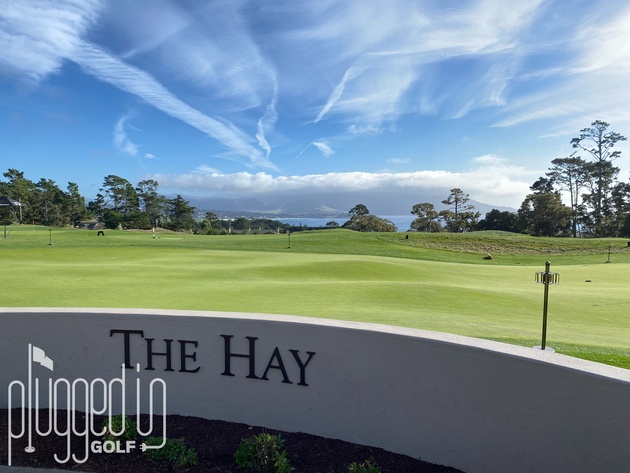 At $65, The Hay is the most affordable way to golf at Pebble Beach.  It’s an even better deal for young players – those under 12 play for free and The Hay is only $5 with a Youth on Course card [more on that HERE].

Just as important as the affordability, The Hay is fun.  The tiny dimensions of this course make it playable for everyone, but the testing greens keep it engaging for skilled players, too.