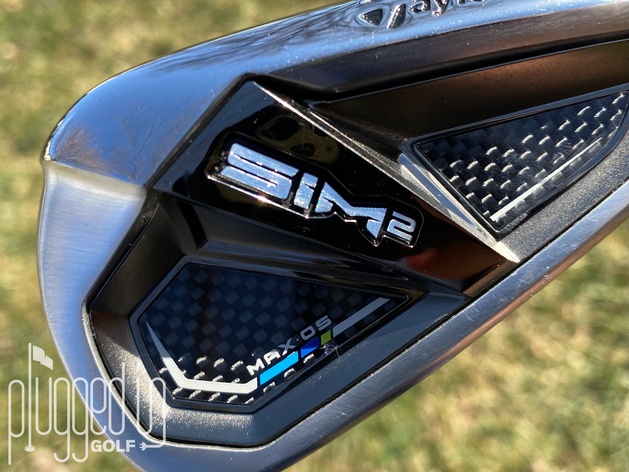 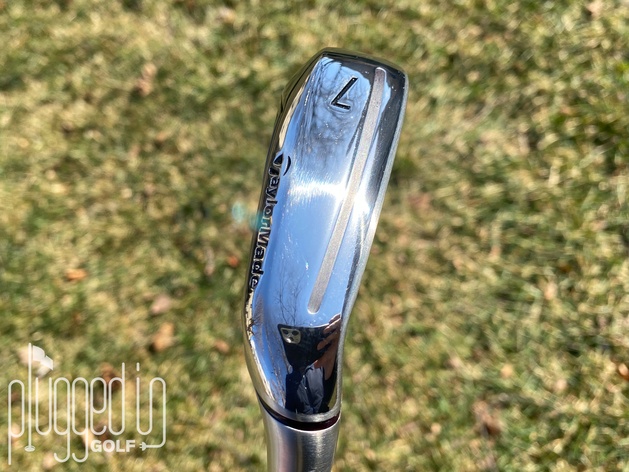 Typically, taking things “to the max” means taking them to their limit.  However, with TaylorMade’s newest irons, the limit is not the SIM2 Max irons [review HERE] but the SIM2 Max OS.  The OS (oversized) version is larger, more forgiving, and capable of producing even longer approach shots. 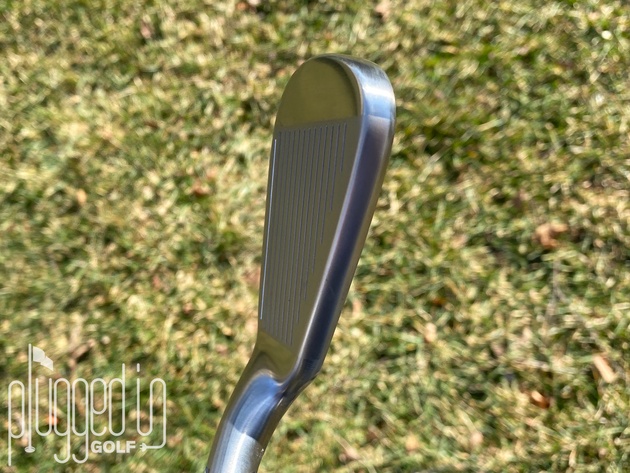 The SIM2 Max OS irons straddle the line between game improvement and super game improvement.  This set has what TaylorMade describes as an “oversized” face profile and a substantial amount of offset.  The top line is thick as is the sole, but the sole does not protrude beyond the top line at address.

In the bag, the SIM2 Max OS looks much like the SIM2 Max but with a deeper cavity.  Like its smaller brother, the OS has a bold, high-tech look, but it eschews color in favor of many shades of silver. 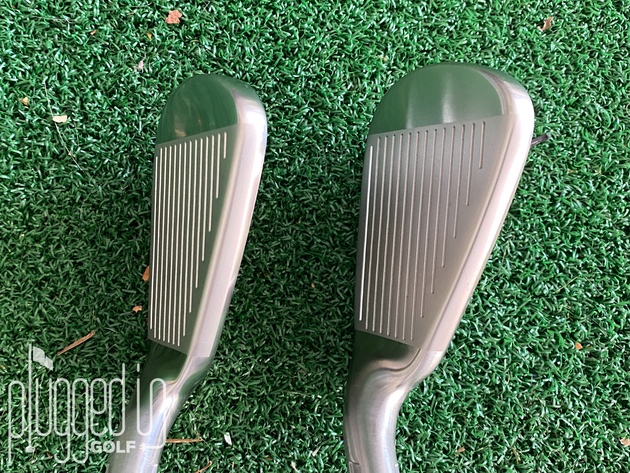 Comparing the SIM2 Max (left) and the SIM2 Max OS, you’ll notice that the top lines are very similar in size.  The most obvious difference at address is the additional offset in the OS model.  A 360 degree inspection will also reveal a wider sole and deeper cavity on the OS. 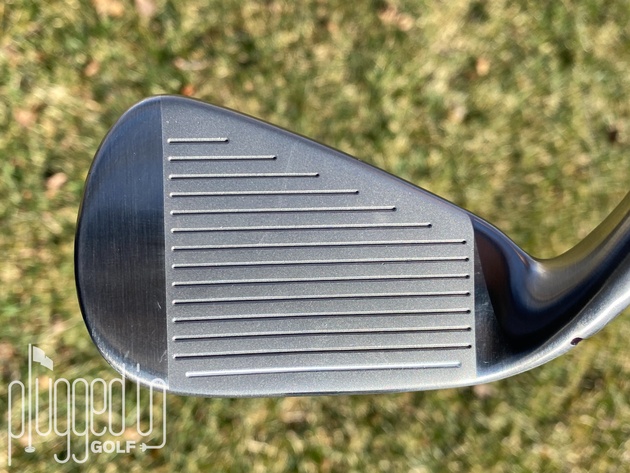 Something I’ve noticed and admire in the SIM2 line is that TaylorMade has kept the feel very consistent between different models.  Each of the SIM2 drivers had the same wonderfully solid impact feel even as they go from draw-biased to Tour-style.

I found that same consistency between the SIM2 Max and SIM2 Max OS irons.  Admittedly these two irons aren’t worlds apart, but maintaining the same feel is still commendable.  The SIM2 Max OS irons are slightly above average in volume with a sound and feel that sits between solid and explosive.  Like the SIM2 Max, there’s enough feedback through your hands and ears to tell a miss from a pure strike. 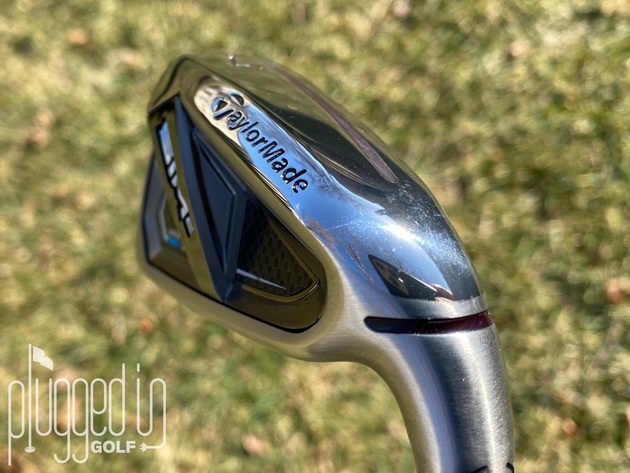 I took the SIM2 Max OS irons to the range alongside the SIM2 Max irons, and the family resemblance in performance was unmistakable.  Like its smaller brother, the SIM2 Max OS just wants to launch the ball into the sky, regardless of contact quality, and send it screaming downrange.  Outdoors, I perceived a medium trajectory very similar to the SIM2 Max with medium-low spin and a lot of distance.  The standout trait was the consistency of the results. 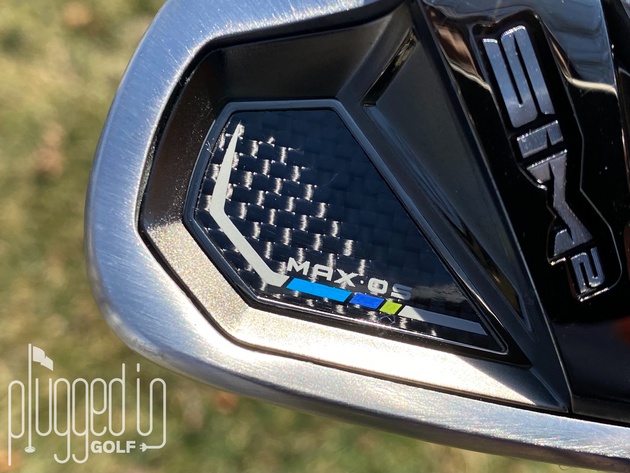 When I got the SIM2 Max OS irons into the testing bay, I saw more of the same.  The lofts of the SIM2 Max OS irons are even stronger than those in the SIM2 Max, but the wider sole and lower CG causes them to launch at similar angles.  The SIM2 Max OS spins even less than its brother.  This is great for producing distance, but it can be problematic when you want to hold a green.  As always, make sure you get fit for your irons.  The right shaft or a small spec tweak can get you the distance you want with the ability to control your shots.

All the forgiveness and consistency I found in the SIM2 Max irons was taken up another small notch in the SIM2 Max OS.  Thanks to all of TaylorMade’s signature technologies – Cap Back Design, Thru-Slot Speed Pocket, and Progressive ICT – these irons produce a ton of ball speed whether you hit it pure or toward the edges of the face.  Also, the aforementioned low CG does wonders for putting thin shots on playable trajectories. 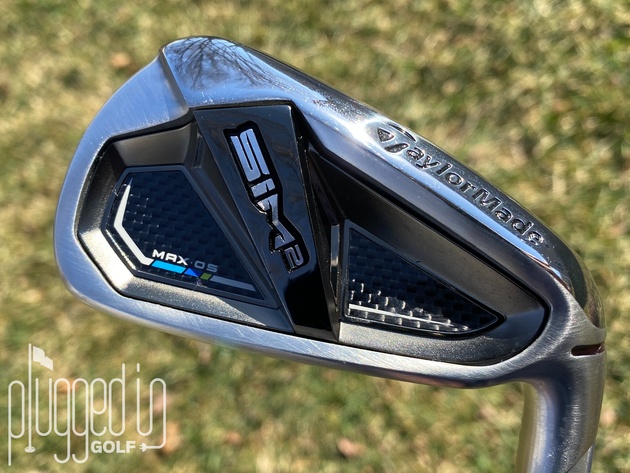 If you want all the forgiveness that money can buy, the TaylorMade SIM2 Max OS irons need to be part of your fitting.  These irons are extremely consistent and easy to hit.  Make sure to get the right shaft and you’ll be hitting long, straight approach shots this season. 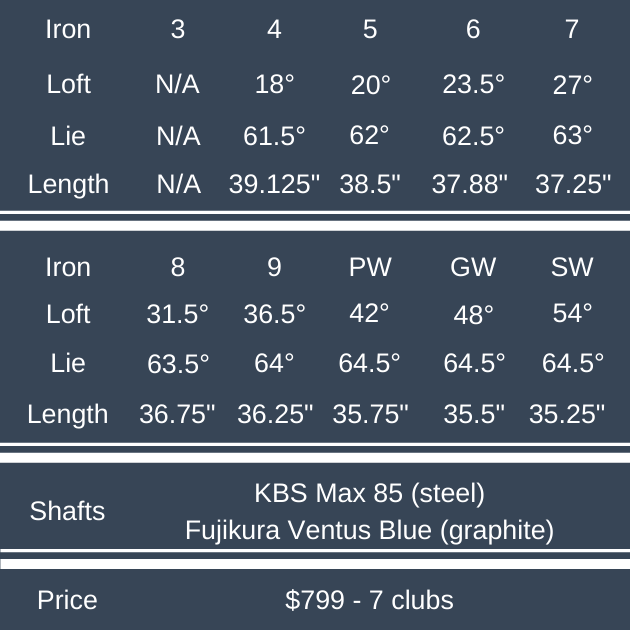