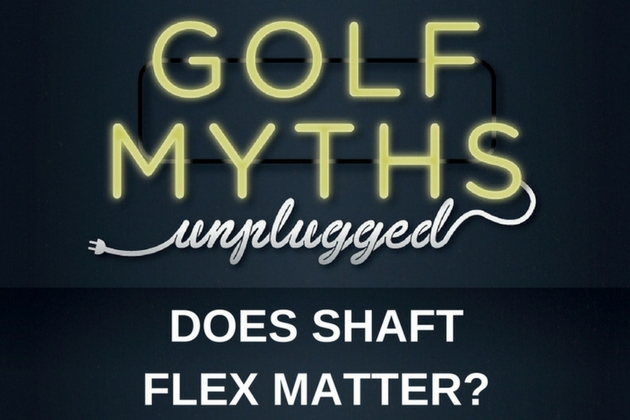 Most of the specs of your golf clubs remain a secret from you playing partners.  No one in your group will ever know the loft of your six iron, the length of your driver, or if the grooves on you wedges are conforming.

The flex of your shafts is an exception.  With a quick glance, your buddies can see if you’re playing something “manly” or if you’re a “soft-swinging wimp.”  And because it’s so visible, many golfers choose their shaft flex based on ego.

We wanted to know if this matters to the performance of the clubs.  Are players trading yards and accuracy for an ego boost? 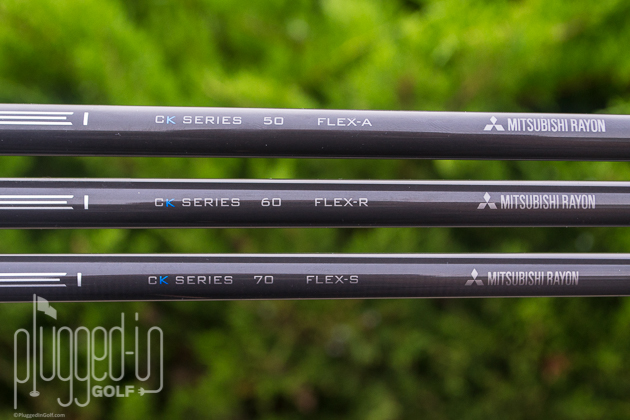 For this test, we brought together six golfers, ranging in handicap from 10 to scratch.  Each player chose a 6-iron head and hit seven shots each with three different shaft flexes – regular, stiff, and x-stiff.  All of the shafts were the same model.  All shots were recorded on Trackman.  No shots were deleted. 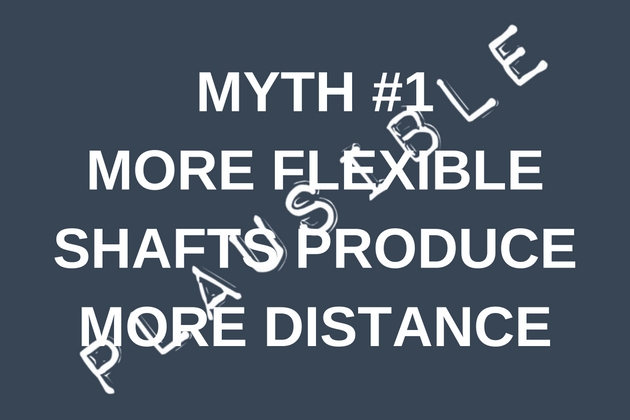 The data that we collected shows that it is plausible that a softer or more flexible shaft can produce more distance.  In our group averages, the regular flex shaft created a little more club head speed, more ball speed, and a slightly higher smash factor.  All this translated to a total distance that was 2 yards longer than the x-stiff and 5 yards longer than the stiff flex.  Additionally, four of our six testers produced their longest shots with the regular flex shaft.

We rate this myth plausible and not confirmed for two reasons.  First, there were fewer mishits (shots with below 1.2 smash factor) with the regular flex shaft.  One could argue that’s a product of the softer shaft, but I don’t think it’s a causal link.  Second, if softer shafts inherently produced longer shots, we would have seen the stiff flex produce more distance than the x-stiff. 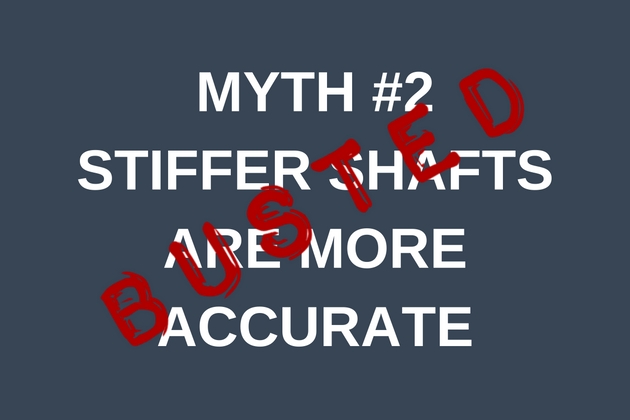 The idea that stiffer shafts are more accurate is busted.  Our testing actually showed the opposite: the regular flex shaft was the most accurate of the group.

When we look at the individuals, we see that accuracy is a matter of fit.  Some players were most accurate with regular flex, others with stiff, and some with x-stiff. 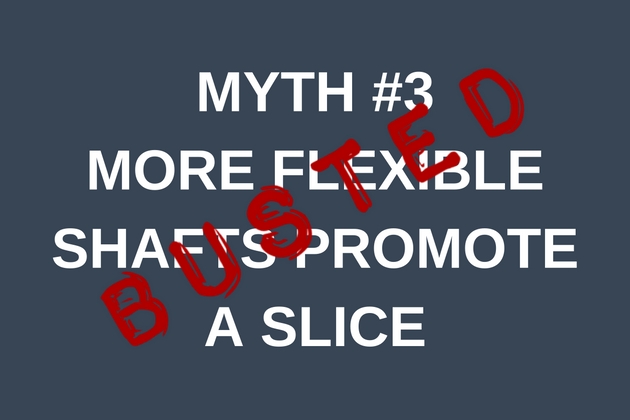 This myth is a personal “favorite” of mine, having heard it from countless golfers when I worked retail.  I am happy to say that it’s busted.  When hitting the most flexible shafts, our testers were either very accurate or prone to hooking the ball.  The only substantial right-sided miss in our whole test group came with a stiff flex shaft. 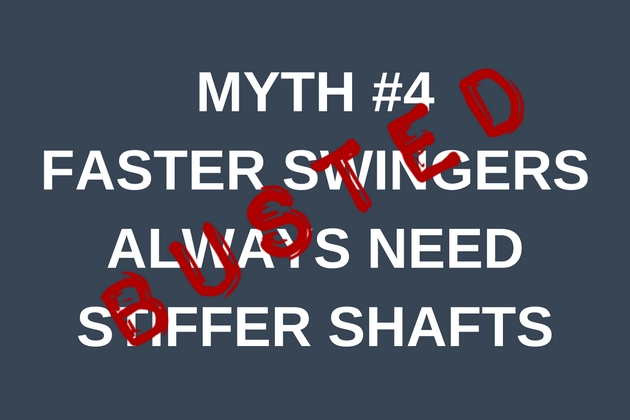 One of the most interesting and surprising findings is that there is not a direct correlation between swing speed and shaft flex.  Players 2 and 3 provide a great example: they both fit best into a regular flex shaft but their swing speeds are 20 MPH different!

There are numerous reasons why this is true.  First, flex is only one variable in fitting.  Shafts can have the same flex but different weight, bend profile, or torque.  Also, the player’s tempo has a big impact on how they load the shaft.  A player with a slower swing and aggressive tempo may bend the shaft just as much as a player with a faster swing and slower tempo. 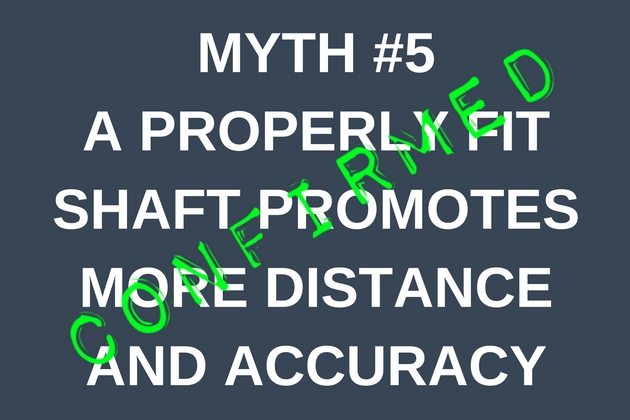 While the data here is not nearly as neat and clean as I’d expected, I believe that it does make the case that being fit for the right shaft will give you more distance and accuracy.  If you look at each player individually, you will see that each one has one flex that clearly outperformed the others.  Four of the six testers found that one shaft produced their longest and straightest shots.  The other two golfers found two shafts that performed very similarly.

Player 1 provides a strong example of the value a good fit.  Switching from regular to stiff helped him gain over 7.5 yards of total distance and brought him 6 yards closer to the target.  Player 2 had similar accuracy with two shafts, but one was 11 yards longer.  Player 3 improved his accuracy by 7 yards and his distance by almost 6.  Finally, Player 6 was 6 yards more accurate and 16 yards longer when moving up from stiff to x-stiff.

The one unusual thing that we saw in our data is that several players performed well with regular and x-stiff but not stiff.  This can be seen in Player 2’s accuracy, Player 3, Player 4, Player 5, and Player 6.  Some of this can be chalked up to mishits, but some of it holds in spite of mishits.

My guess is that these players performed well with the correct fit and could compensate for a really poor fit but couldn’t adjust to a fit that was slightly off.  Think of it this way: if someone gave you a club with a droopy rubber shaft, you would sense immediately that it felt “wrong,” and you’d focus on adapting to it.  With a club that’s just a little off, however, you might continue making normal swings without being able to sense what’s going wrong.  Again, this is just a guess and we may revisit this in the future to learn more.

The choice is yours: you can let your ego select your shaft flex, or you can choose to hit longer, straighter shots.  The evidence we gathered clearly shows that shaft flex is a critically important variable in choosing the right clubs, and fitting it is not as easy as finding your swing speed on a chart.  Make an appointment with your local club fitter and see if, like our testers, you can gain up to 16 yards of extra distance. 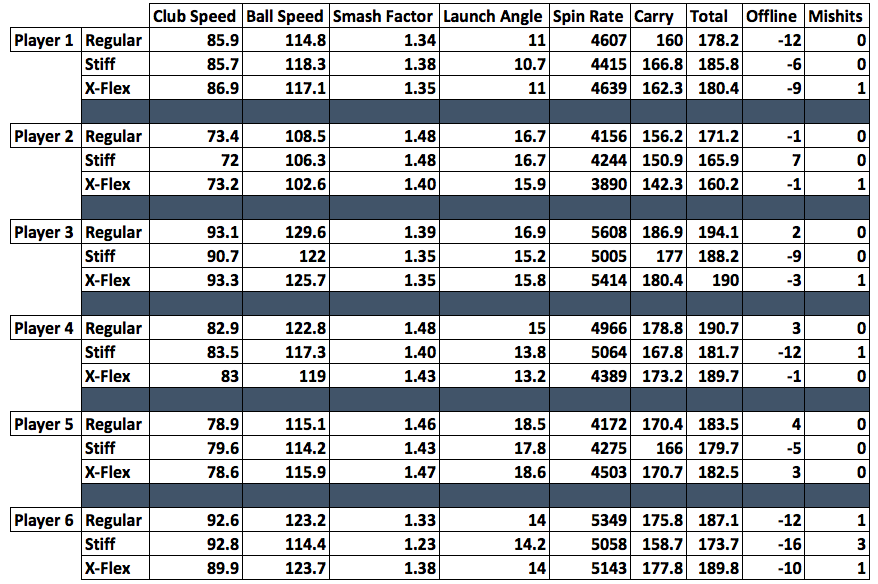 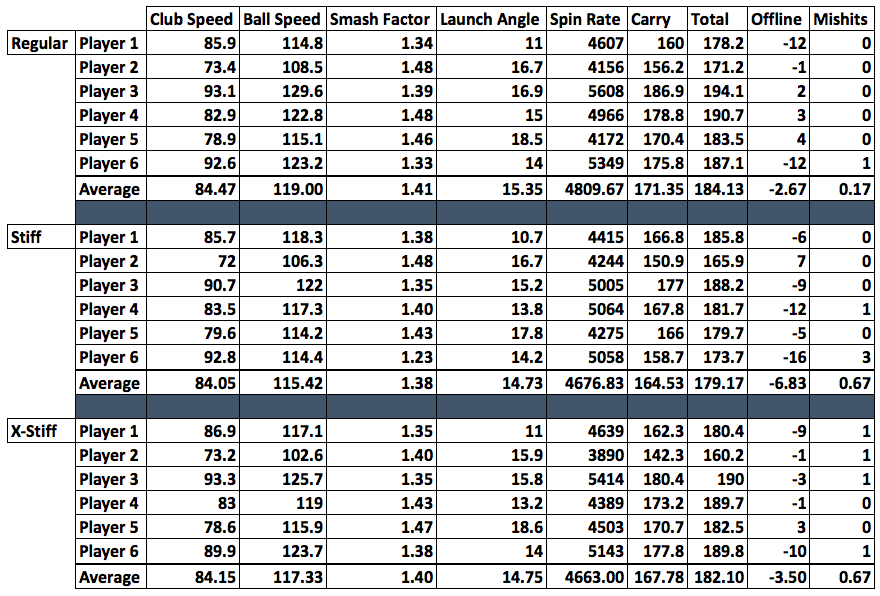