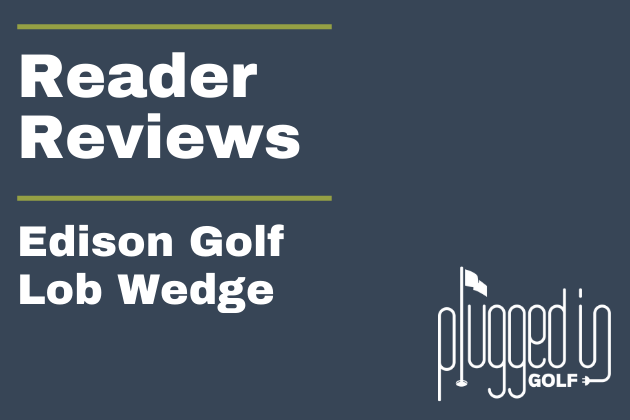 How did the Edison Lob Wedge perform on full shots?  I typically do not hit full shots from longer distances with a lob wedge due to consistency.  I feel more comfortable using a lower lofted wedge and adjusting my swing speed.  With that said, the Edison wedge seemed to have a pretty tight distance dispersion when I hit full shots with it. While the company claims the wedge typically launches lower than a normal tour wedge, I did not notice a difference.  However, the Edison did seem to carry about 10 yards or so further than my current wedge and had plenty of spin.  With more use and familiarity I can see myself using the wedge more for full shots.

How did the Edison Lob Wedge perform on chips and pitches?  The Edison really shined on partial shots and pitches.  I seemed to get much more spin out of the Edison and saw balls move on the green in ways I have never seen before.  I knew the ball was going to check up so it allowed me to be more aggressive and have balls end up closer to the hole.  I had no problem opening up the face and hitting flop shots that would zip on the green.  As someone who never had the confidence to actually try one of those on the course, it was thrilling to be able to pull them off with great success.  It also performed great out of the bunker allowing for high, soft landing shots with plenty of spin.

How did the Edison Lob Wedge feel?  The wedge felt pretty similar to my current Cleveland.  It might be a little less harsh on mishits that are not dead center, but you can still feel where you made contact on the face.  Flushed shots feel fantastic and you know that there is going to be a ton of spin when the ball lands.

Additional notes: Overall the wedge feels and looks like a premium club.  It outperformed my current lob wedge in all aspects and did exactly what I asked of it.  I am seriously contemplating swapping out the rest of my wedges with matching Edisons.

Will the Edison Lob Wedge be your new gamer?  Yes!

How did the Edison Lob Wedge perform on full shots?  Spun noticeably more than gamer.  Had a more penetrating flight as opposed to ballooning.  Perhaps lost a few yards due to gained spin.

How did the Edison Lob Wedge perform on chips and pitches? Consistency in spades!
Lower ball flight on pitches, and noticeably more spin than gamer checking and stopping quickly!
Opening up the clubface and swinging fast lead to unbelievable spin to stop quickly and at times spin back as though it were on a pulled string

How did the Edison Lob Wedge feel? It has a solid feel that is quite smooth and soft at the same time. Mishits didn’t affect the pleasant feel much but let you know where you missed it. On perfect strikes, it almost felt too soft if that’s possible! One of the most enjoyable wedges I’ve ever hit.

Additional notes: Gave me confidence quickly using the Edison wedge – both out of the rough and out of the bunkers especially.

Will the Edison Lob Wedge be your new gamer?  Yes 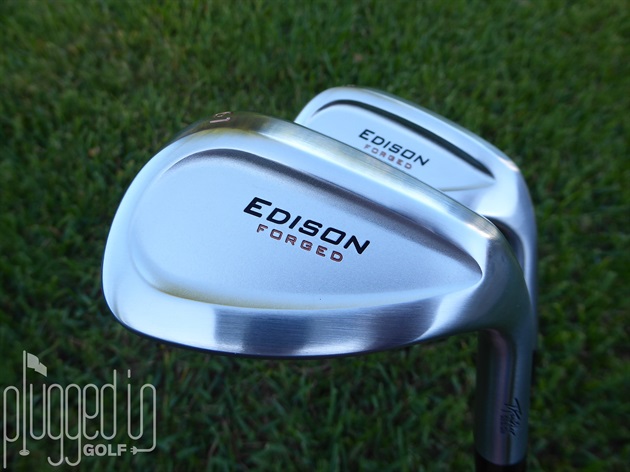 How did the Edison Lob Wedge perform on full shots?  Great. Though I don’t hit full shots with my lob wedge all that often, a full swing felt very good. Trajectory was high and predictable and the ball came down and sat on the green right where it landed or spun back a little bit.

How did the Edison Lob Wedge perform on chips and pitches?  Excellent. Around the greens is where I really enjoyed using the Edison lob wedge the most. Whether hitting a high lofted shot flop-type shot or a hooded low spinner, the ball always seemed to behave exactly as I envisioned. In this respect, it performed every bit as well as my gamer.

How did the Edison Lob Wedge feel? The feel is very good, although not quite as soft as my gamer. I found it to be responsive in that it was easy to tell how well I hit the ball based on the feeling in my hands.

Will the Edison Lob Wedge be your new gamer?  No, but it was a close call and I think it should be a consideration for way more golfers looking to buy new wedges. Testing this wedge was a good reminder not to judge a book by its cover and that just because something looks a little different than the norm or doesn’t have a recognizable name, doesn’t mean it isn’t a good product.

How did the Edison Lob Wedge perform on full shots?  Very well – this area was a strong point for the Edison wedge. I don’t hit a lot of full shots with my lob wedge but found the Edison inspired more confidence than my current lob wedge. My Rapsodo showed the Edison launch angle and distance was about equal to the CBX 60 degree, with a tighter horizontal dispersion for the Edison. Was also very solid from 50-70 yards, a distance I have traditionally struggled, although the deviation was higher here which I think was more due to my skill level than the club.

How did the Edison Lob Wedge perform on chips and pitches? Initially this was a struggle, and if this was a one-week review, it would have been negative. My main issue was blading or chunking chips, which I’d almost eliminated with the CBX. I kept working and my performance drastically improved into week 2. I didn’t need to deloft the club as much as I did with my CBX (see Additional Notes below) but found I was more comfortable hitting a higher pitch versus a lower running chip with the Edison 61 degree – I may feel different with a lower lofted club.

How did the Edison Lob Wedge feel? After I got over the blading issues the Edison allowed me to locate my misses without being overly punitive. As mentioned, the touch shots that I mostly play with a lob wedge took some adjustment, and the Edison was 1/4 inch longer which was oddly noticeable until I spent more time with the club. Overall the feel was very solid, and more firm than the CBX.

Additional notes: The sole of the CBX is significantly wider than the Edison with a (relatively) large area at the front edge. My go-to shot with the CBX is delofting the face and hitting a low shot that functions like a very short bump and run. It has been useful in tight lies where I don’t have a lot of green – I know there are other ways to achieve this result but it has guaranteed predictable contact and results on a shot where I may have previously bladed something trying to get the ball in the air. When I tried to deloft the Edison, I was digging and/or blading the ball over the green. After some practice I am feeling much more comfortable with the Edison. It seems the Edison is noticeably more forgiving than a standard blade wedge. It is marginally (for me at least) less forgiving but more versatile than the CBX or CBX2. Depending on your game, less versatility may be a benefit that forces you into higher-percentage shots. The Edison also looks better to my eye and while the CBX/CBX2s don’t offend me, they’re noticeably longer and have a much thicker look.

Will the Edison Lob Wedge be your new gamer?  It’s a solid maybe. I know where my current wedges will go and I don’t want to fix something that isn’t broke. I can’t see myself changing brands before the offseason. I had planned to get new CBX2s in a few months, but now I need to seriously consider Edison. The Edison wedges look better, go as far and launch about the same as the CBX 60 degree wedge. The Edison grooves were also great – my CBX/CBX2s are all about 2 years old so the grooves are worn but I don’t recall them ever stopping like the Edison does, and it was fantastic out of the sand. Edison is $40 per wedge more ($160 for the 4 wedges I play), and that’s a lot when the performance gains feel marginal. With all of that said, I love the look, the performance is there with some practice, and I’m a DTC golf addict (Sub70 irons and a LAB putter), so if my improvement continues Edison wedges could round out my non-conformist bag nicely.

UPDATE: I went ahead and started gaming the Edison, with increasingly positive results.