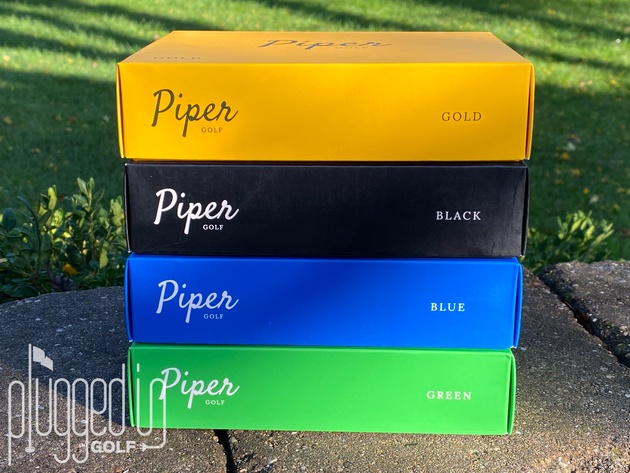 Piper Golf makes a range of golf balls at prices significantly lower than the big names.  Strong, consistent performance at each level.  Piper Black and Piper Gold are comparable to the most expensive golf balls. 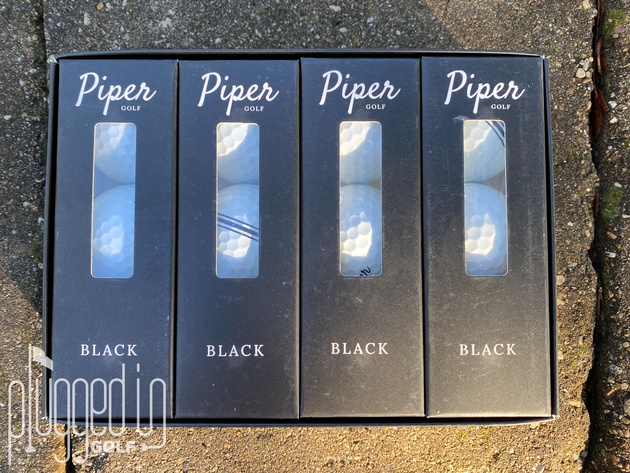 Direct-to-consumer golf balls are not a new thing.  In fact, golf feels overloaded with DTC ball companies.  So, if you’re Piper Golf, how do you stand out?  You start by offering a line up of golf balls that covers every golfer.  Follow that up with a helpful website that has things like a clear list of golf ball features HERE and a fitting guide HERE.  Finally, break out of the uptight golf mold with an irreverent, relatable social media presence (follow them on Twitter HERE). 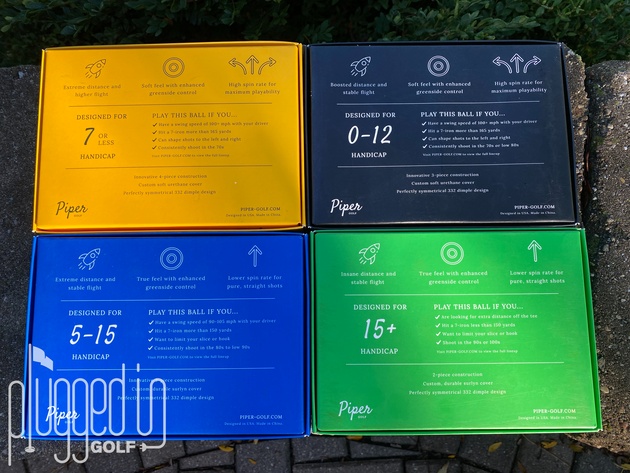 The Piper Golf Ball Line Up

So that everyone is on the same page, let me run down the four golf balls that Piper offers.  The comparisons come from Piper’s website.

Piper Green is labelled as the “Beginner” ball, comparable to Titleist Velocity and Callaway Supersoft.

Piper Black is the “Advanced” ball and is compared to the Pro V1 and TaylorMade TP5x. 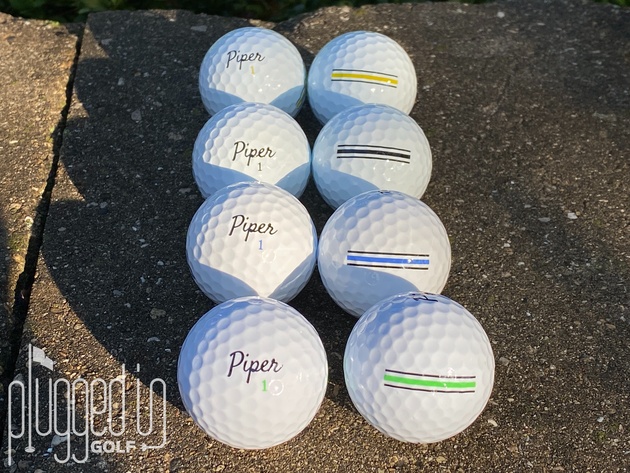 While each Piper golf ball has a unique feel, there’s a clear divide between the surlyn-covered balls (Green and Blue) and the urethane-covered balls (Black and Gold).

With a putter, both the Green and Blue are firm with a medium-volume, low-pitched impact sound.  Blue is slightly quieter than Green with a feel that’s more solid, less hollow.  Switching to Piper Black, the feel is much, much softer, and the sound of impact is a very quiet “thud.”  Piper Gold feels very similar to Black though it’s slightly firmer with a bit more “knock” at impact.

In the short game, both the Green and Blue have a clicky impact sensation.  Blue is slightly softer than Green, but both are fairly firm off a wedge.  Piper Black and Gold have a premium feel around the green – soft, solid, with a quieter, lower-pitched click.  As with the putter, Piper Gold feels a bit firmer than Black. 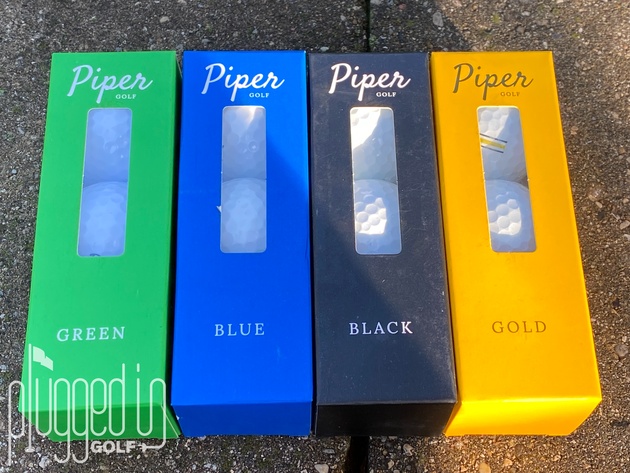 The difference between the surlyn and urethane covers is even more stark as we turn toward the short game.  On pitch shots and full wedge swings, Piper Green and Piper Blue performed very similarly.  Piper Blue spun slightly more, but the difference was less than 5%.  Both balls are quite low spin, just as Piper advertises.  This is done to help the higher handicap player keep their shots straighter and potentially longer.

For the low handicap player who wants wedge spin, Piper Black and Piper Gold are ideal.  On a pitch shot, these balls spun roughly twice as much as Blue and Green.  On a full wedge swing, they spun about 75% more.  Piper Black and Gold stand shoulder-to-shoulder with the Tour-balls from the big OEMs in terms of short game spin.

Across all four balls, I was most impressed with the consistency.  My spin rates were barely changing from shot to shot, excluding poor swings.  That kind of predictability is essential to building trust with a golf ball. 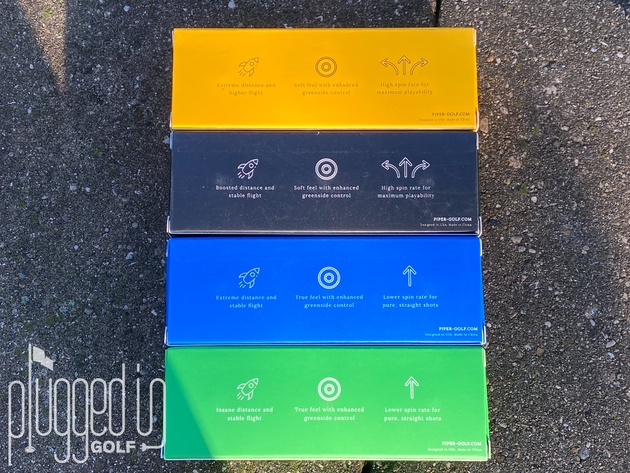 As we move further from the green, the four Piper balls separate themselves a bit more.  With an iron, the 2-piece Green remains the lowest spinning model.  For me – a low spin player by nature – it created laughably low spin.  6-iron shots ran out like they were hit by a 3W.  However, for players that create average or high spin, the Green will help them produce longer, straighter shots.  Piper Blue spun 5%-10% more than Green with a mid iron.  Spin was still low, but it offers a little more versatility for the improving player.

With the Piper Black and Piper Gold, iron spin is firmly in the average range for a Tour ball.  Both spun substantially more than the Green or Blue.  I found the Gold to be slightly higher spinning than the Black, but the gap was less than 5%.

Finally, we get to the driver.  I’ll start with my standard preface: I’m a low spin player with the driver, so you may see larger gaps or entirely different results than I did.  For me, the Piper Green was the lowest spinning ball in the group, and it’s among the lowest spinning balls I’ve tested.  If you’re a high spin player or someone fighting a big hook or slice, this could be a major improvement.  Piper Gold and Blue spun a bit more than Green – about 200 RPM – making them low spinning but not insanely low.  Piper Black was the highest spinning off the driver, producing what I regard as average driver spin for a Tour ball.  It’s also worth noting that I got better ball speed with the Black and Gold than Blue or Green.  The difference wasn’t huge, but it was a consistent 2-3 MPH.  This fits with Piper’s recommendations – they suggest the Black and Gold for players with 7I distance over 165 yards. 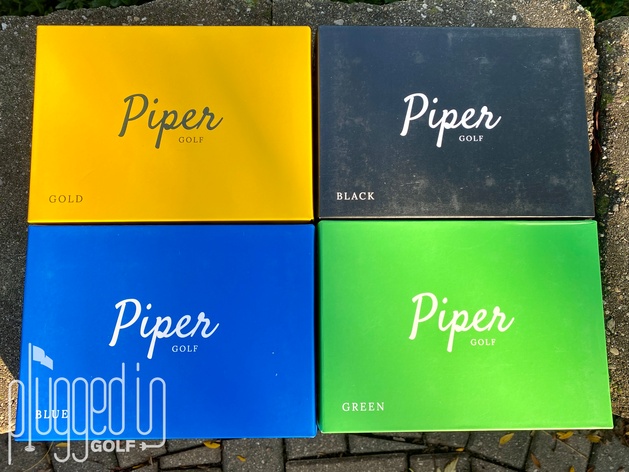 Piper’s golf balls, starting from the least expensive Green to the most expensive Gold, cost $20, $25, $30, and $35 per dozen.  Every model is offered at a discount if you buy in bulk, starting at three dozen.  If you buy six dozen, you get a full 20% off.  That means you can get the Piper Black, a ball that is Tour quality, for as little as $24/dozen.  That’s half the price of a major OEM Tour ball!

If you’re not sure which Piper golf ball is for you, they offer a sampler dozen for $30. 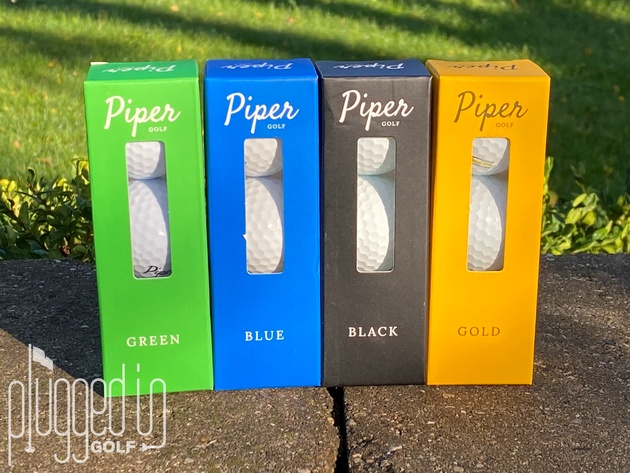 Piper Golf, though young, is doing a lot of impressive things.  Not only do they offer a golf ball to fit every player, they’re doing it at a lower price.  They’re also cutting down on the confusion, making it simple to choose the right ball.  With a 30-day money back guarantee, there’s nothing to lose in giving Piper Golf a try.