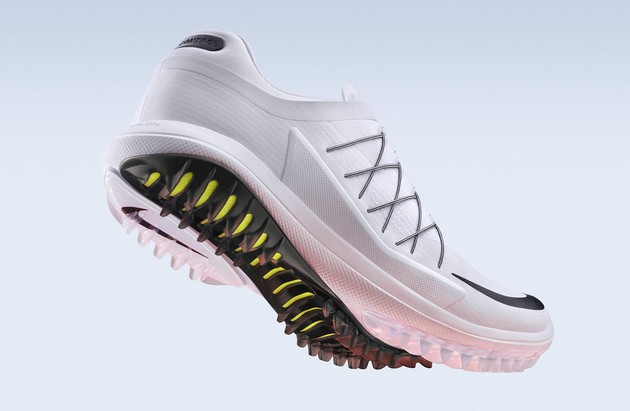 Inspired by the tread on snowmobiles, the new traction system, which was first introduced in the Nike Flyknit Elite, decouples the medial heel and lateral forefoot area to help propel the athlete through the swing. The articulated channels also allow for better balance while keeping the golfer lower to the ground. A unique TPU tread features a protruding series of tooth-like tracks allowing for more points of contact for maximum traction that continuously engage with the ground as weight shifts from heel to toe.

“From the beginning, our goal was to help athletes perform at the highest level,” said Gentry Humphrey, VP Nike Golf Footwear. “Nike Articulated Integrated Traction’s geometry provides great traction on any surface and disperses stud pressure. Not having to place receptacles on the outsole means more room for extra foam underfoot to provide amazing cushioning.”

That means it is both effective in a bunker and friendly on the green.

In the Nike Lunar Control Vapor, Nike’s new traction system is married to a full-length Lunarlon midsole and Nike Flywire. Combined these elements help keep the foot stable, and cushioned, through the swing. A lightweight premium microfiber upper with a 2-year waterproof guarantee to keep feet dry. 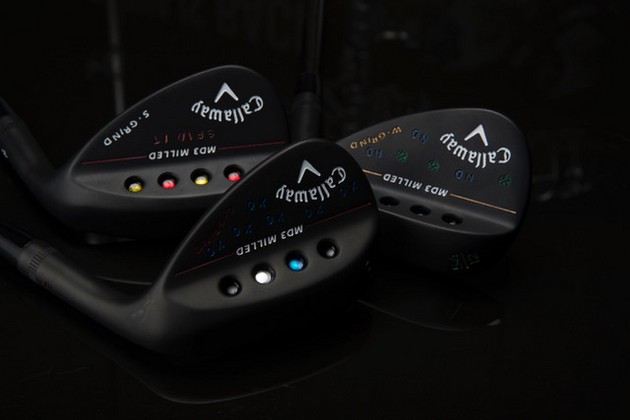 The web page features an innovative and easy-to-use wedge configurator, where golfers can complete the 6 main options to fully customize their wedges: https://www.callawaygolf.com/wedges-2016-mack-daddy-3-custom.html?

1. Paint Fill: Choose the finish (Satin or Chrome), color of the loft and bounce, color of the lines on the wedge, color of the grind, color of all 4 weight ports
2. Stamping: Customize the letters and text stamped on to the wedge, as well as the symbols and colors. Golfers can chose a 3-letter stamping option or a more advanced option up to 10 letters.
3. Head options: Including Loft and Lie Angles
4. Shaft Options
5. Grip Options
6. Summary of the full design

(STAMFORD, CT) – Arccos – maker of Golf’s #1 Performance Tracker – announces the launch of its latest app update for iOS devices, including translations for 13 languages and a player option for rangefinder GPS distances and player stats to be displayed in meters.

Developed specifically to address user demand as Arccos’ international market share rapidly scales, these enhancements are currently live within the Arccos Golf and Arccos Driver iOS apps and will soon be introduced for Android devices. Adjusted according to the language of a user’s keyboard, the updated translations include Chinese (simplified and traditional), Czech, French, German, Hungarian, Italian, Japanese, Korean, Portuguese, Russian, Spanish and Turkish.

“Our vision is to bring the personal data revolution to golfers everywhere by helping them unlock their golf DNA to play better and have more fun,” says Sal Syed, Arccos CEO and Co-Founder. “This latest update addresses requests we’ve consistently received from community members and sets the stage for Arccos’ continued global expansion in 2017 and beyond.”

One of golf’s most acclaimed technology platforms, Arccos recently announced its second-generation flagship system, Arccos 360. This showcases low-profile sensors that are approximately 50% smaller and lighter, as well as a powerful shot detection algorithm that virtually eliminates the need for shot editing from tee to green.

Arccos 360 consists of 14 sensors that easily attach to the club grip and communicate with a free app. The system seamlessly delivers data on distances hit, club averages, driving accuracy, greens in regulation, sand saves, putts and more. Unlike competing products, it requires no tagging, tapping or other annoying disruptions to a player’s routine.

By accessing the Tour Analytics web dashboard, Arccos users and their instructors can gain valuable insights via deep dives into stats, playing patterns and rich data comparison for every club, shot, hole and round. Developed in conjunction with golf’s most renowned statistician, Peter Sanders, Tour Analytics draws from his work with PGA Tour star Zach Johnson and many others. It breaks down a players’ handicap into five key components – driving, approach, chipping, sand game and putting – helping golfers:

• Understand exactly how each part of their game contributes to scoring
• Compare data in each of the five components with golfers of similar handicaps
• Evaluate patterns across their golf history, supporting refinement of on-course tactics

The Arccos product portfolio also includes Arccos Driver ($79.99), a single-sensor solution that delivers live data for tee shot distances, fairways hit and more. It functions by automatically detecting each drive, then using a player’s smart phone to record second shot position. Other features include the King of the Hole game, which turns any par 4 or par 5 into a virtual long drive competition.