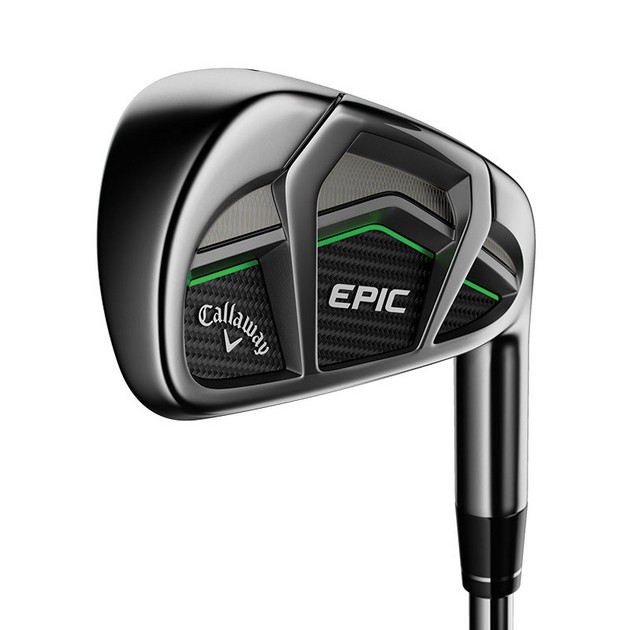 Callaway Golf officially announced their new Epic Irons, Epic Pro Irons, and Epic Hybrids, all available at retail on June 16th. Each of these new products is engineered to create maximum performance, without any limits to the cost or engineering process.

70 of the best engineers in golf were dedicated to the project with two key messages: we want groundbreaking innovations, and there are no boundaries.  The engineering team had the freedom to give these irons every performance advantage by using the most ultra premium materials and advancing some of the most revolutionary technologies in the industry.  The result is the most premium, high-performance iron ever to bear the Callaway name.

Advancing the industry-leading face technology that made Callaway the #1 Iron in golf, the rim of the Face Cup is 1 mm at its thinnest point to add even more ball speed on center hits and further minimizing distance loss on offcenter hits.

Exo-Cage head construction stiffens the body to allow the face to take on more of the load of impact. This is known as “Energy Lensing” – it promotes faster ball speed for longer distance, and it helped raise the COR in Epic Irons right up to the limit in each iron. We’ve never reached that level of speed in a full set.

Multi-material construction demands strict tolerances, seamless fit and secure bonding. Epic Pro Irons are precision-milled and robotically welded, and every iron in this set is uniquely constructed for maximum integrity and optimum performance. Incorporating tungsten in the Internal Standing Wave allowed Callaway engineers to precisely position the CG in each individual iron. This includes a lower CG for easier launch and long carry in the long irons, higher CG in the short irons for a lower, more controllable flight, and left-to-right CG control in tandem with the hollow hosel.

Fujikura was the #1 Manufacturer of both Driver and Wood Shafts

This past weekend’s winner has been playing ATMOS Tour Spec Black 6X since the 2017 Farmers Insurance Open. The low launching, low spinning performance was well suited to his swing and his new PXG 0811X Driver. Black is the lowest launching and spinning of the three new Tour Spec options. He averaged 305.5 yards off the tee on Sunday and 305 for the week at TPC Four Seasons in Irving, TX. He also trusted his driver in the clutch on the 72nd hole by hitting a 316 yard drive in the fairway on route to making par to secure his spot in a playoff. This was his first victory on the PGA Tour since 2014.

In addition to being the shaft of choice by the winner, Fujikura was the #1 manufacturer of both Driver (28.2%) and Wood shafts (22.5%) (source: Darrell Survey).

ATMOS Tour Spec was introduced to players on the PGA TOUR at The Career Builder Challenge and is one of the newest and hottest shafts on Tour. Each week on Tour, the number of ATMOS shafts in play is growing as players take notice and continue to test. At This past weekend’s AT&T Byron Nelson Championship there were a total of 22 ATMOS Tour Spec wood shafts in play. 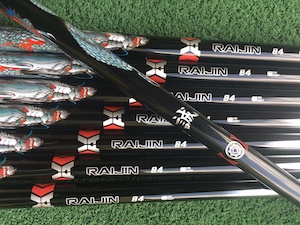 VA first entered the market in January 2017 with their Raijin Shaft Series. The Raijin is available in 44, 54, 64, and 74 gram weights. Now, the Raijin is also available in irons and hybrids. The Raijin incorporates a winning design utilizing an exotic mix of multi-materials supplied by the number one maker of pre-preg composite materials from Japan. The Raijin is a very versatile shaft that fits a wide variety of players. The S and X flexes feature mid-to-high launch characteristics – coupled with low spin. The Raijin features a torque range from 2.8 to 5.6 degrees, depending on the weight and flex of the shaft. This shaft has a higher balance point, which helps for better balance and swing weight control. The result – longer flight and tighter dispersion.

The newest addition to this series is the Raijin Iron shaft. The Raijin Iron is available in 74 and 84 grams. Its versatile parallel tip allows our VA Dealers to custom fit these iron shafts to exact specifications for any golfer. The Raijin Iron is designed to get the ball into the air easier and optimize launch and spin conditions for a wide variety of players. Its proprietary and exclusive design is created with high performance 40T pre-preg materials.

“There has been an overwhelmingly positive response to the Raijin Shaft Series, not just in performance, but in aesthetics as well. The VA Dealers and I agree that their performance is off the charts, so, it was natural progression for the addition of Raijin Iron to the newly launched line”, states Victor Afable -Founder and CEO of VA Composites, Inc.