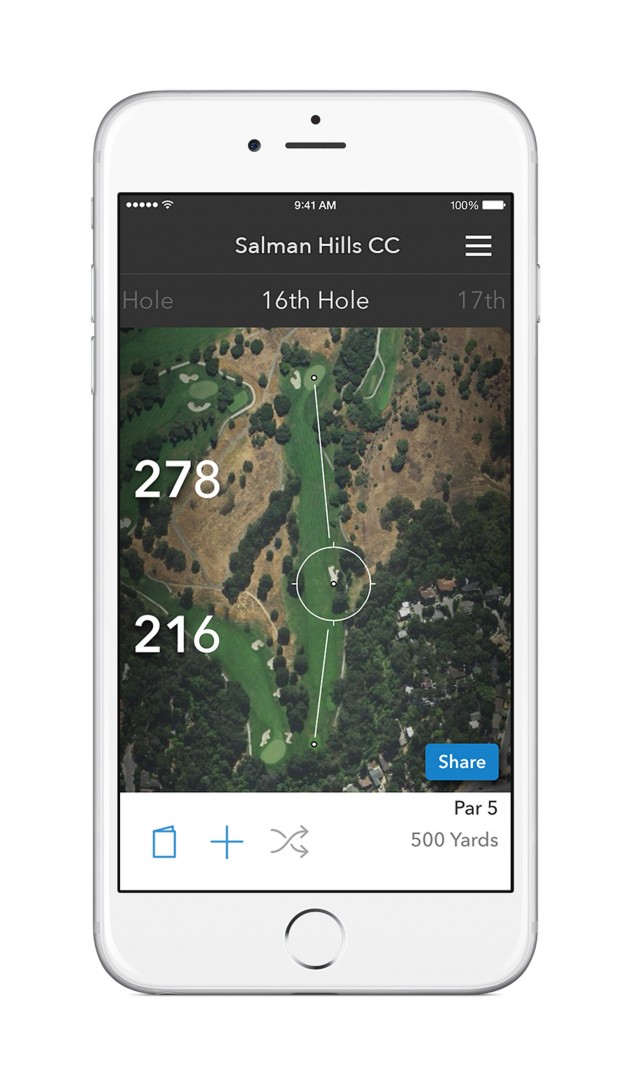 (STAMFORD, CT) – Arccos Golf – maker of the game’s only GPS + Live Shot Tracking + Tour Analytics platform – announces the premiere of Advanced GPS capabilities, providing users with precise yardages to any location on a hole while simultaneously showing the distance from that spot to the green. Also part of this new touchscreen functionality for the award-winning Arccos system is an automatic zoom capability. It gives players a more detailed view of the hole as they get closer to the green. Combined, these two updates help players of all skill levels lower scores by excelling in course management. “Our Advanced GPS works hand-in-hand with the shot tracking aspect of Arccos, allowing golfers to strategize about every aspect of how they will attack a hole,” says Arccos CEO Sal Syed. “This supports our mission of helping players unlock their Golf DNA by gaining maximum knowledge about their strengths and weaknesses, as well as the courses on which they are competing.” Further distinguishing Arccos ($299.99) are its new suite of social features. These allow users to follow other players, see who is following them, and receive round updates – including holes, stats and bests – directly to their in-app social stream. Instructors and coaches can use this as a tool to “follow” players, instantly receiving their stats upon completion of a round, or gathering valuable information on overall performance via deep dives into statistics, past rounds, Tour Analytics and more. Requiring no alterations to pre-shot routines, additional devices, tapping or other hindrances to enjoyment and improvement, the Arccos system features a set of 14 virtually weightless sensors. Easily attached to the end of a club grip, each sensor is paired just once via Bluetooth to the company’s free iPhone app. Along with GPS for more than 20,000 courses worldwide, Arccos captures critical data for your game, instantly delivering information on distances hit, club averages, driving accuracy, greens in regulation, sand saves, putts and more. This helps golfers identify patterns and refine tactics before, during and after each round. Widely heralded as one of the game’s most innovative and beneficial technologies, Arccos is endorsed by 2014 FedExCup Champion Billy Horschel and is among the first golf-specific apps offered for Apple Watch. Essential to the Arccos system, the Tour Analytics platform helps golfers identify patterns and refine tactics before, during and after each round. This was developed in conjunction with golf’s most renowned statistician, Peter Sanders. Drawing from his work with PGA Tour star Zach Johnson and many others, it automatically breaks down a players’ handicap into five key components – driving, approach, chipping, sand game and putting – helping golfers: ·         Gain insight into what every shot means ·         Understand exactly how each part of their game contributes to scoring ·         Explore comparative data in each of the five components from golfers with the same handicap ·         Evaluate patterns across their entire golf history, supporting refinement of on-course tactics Now available at Apple Stores, select golf retailers and pro shops nationwide, and www.arccosgolf.com, Arccos is trusted by top instructors who rely on the system to help their students recognize and correct faults, such as club distance gaps, noticeable shot dispersion patterns and other problem areas. Led by a team of Ivy League engineers, rocket scientists, PhD’s and designers, Arccos Golf is named after a function of advanced mathematics. 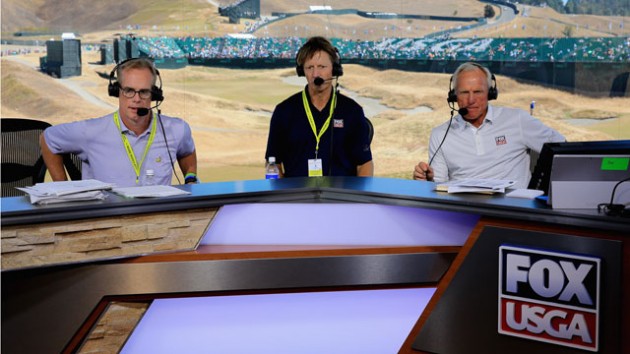 Behind the Scenes With Greg Norman and Fox Sports at the U.S. Open

About 200 turbocharged golf fans have gathered inside the USGA Members Clubhouse, a hospitality tent located near the entrance to the Chambers Bay fan village. The sky is a lush hue of blue, the atmosphere festive. The 115th U.S. Open is less than 24 hours away, which means the pregame blather has reached a rapid boil.

The buzz in the tent turns to applause as a woman and four men enter the room, take their seats and find their microphones. Three are major champions, the fourth one of the finest putters ever. Even the guy who didn’t play professionally is a 2 handicap. At Fox Sports, you go big and you don’t go quietly. On a Wednesday morning in the Pacific Northwest, it doesn’t get any bigger or louder than this.

The introductions go on way too long, considering the program is scheduled for just 30 minutes, but then, Fox’s on-air golf team brought a lot of brass to Chambers Bay. Juli Inkster owns the most major titles (seven) of the bunch. Corey Pavin won the Open in dramatic fashion 20 years ago, and though Brad Faxon is incorrectly credited with 21 PGA Tour victories by the emcee, he did rack up eight wins and play on a couple of U.S. Ryder Cup teams.

It is the man made famous for what he didn’t win, however, who accounts for the sizable audience and the current of excitement. At 60, Greg Norman still turns heads, still steals the majority of the attention, still brings a sense of significance to a half-hour Q&A. He gets the loudest ovation. He gets the biggest laughs, although Joe Buck, the anchor of Fox’s inaugural U.S. Open coverage, is funnier.

The guy in the blue-striped shirt wants to hear scores from each of the five on their last trip around Chambers Bay. Only Faxon gives an actual answer (“around 40”); Norman uses the question to reiterate his fondness for the course and what to expect from the best players in the world over the next four days.

“I call it crazy good,” he says of the layout. “The multi-dimensional players—guys who flight the ball, spin the ball, move it left to right or right to left, who can hit it high or low—are the ones who will do extremely well. If you’re a one-dimensional player, you have no chance here.”

Just as things start to get interesting, the party ends. There are golf carts positioned for the ride back to the compound and TV producers anxious about the next rehearsal. Fox spent $1.2 billion to televise the national championship and other USGA events over the next dozen years, and as a brash rookie barging into a game that isn’t all that crazy about change, the network feels an immense burden of proof—pressure to establish immediate and lasting credibility. 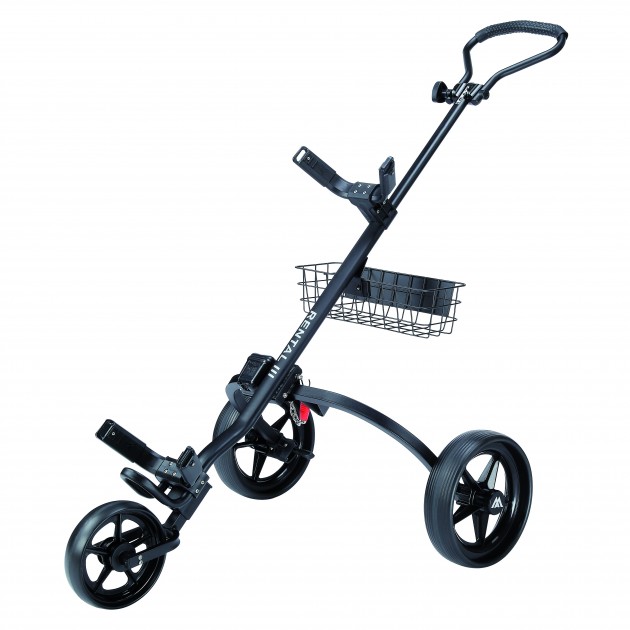 (TACOMA, WA) – BIG MAX GOLF – Europe’s #1 golf trolley brand and a global pioneer of the three-wheeled push cart – announces the launch of Fleet 333 C, its flagship, high quality push cart rental model designed to meet the quality standards and demands of even the most high-end golf clubs. The robust, stable and practical 3-wheel rental trolley features sand bottle holders, a comfortable handle, scorecard holder, an accessories bag and a deep storage compartment. Accessories such as an umbrella or GPS holder can easily be attached using the Quick Fix bases located near the handle. Two additional Quick Lok bases allow for the attachment of even more accessories such as a bottle holder or towel. Optional features include an accessories basket and bungee cords for added storage and stability. “We guarantee humidity and rust resistance in all of our rental carts thanks to a specialized paint process, one of the many superior Big Max manufacturing elements incorporated into our products,” says Kelly Walker, CEO of BIG MAX GOLF. “With the new Fleet 333 C, we want to offer golf clubs a quality cart option for golfers who prefer to walk but sometimes opt to ride due to unreliable or poorly designed push carts.” Other Big Max products available in the United States include a range of award-winning push carts such as the Blade, IQ+, Autofold+ and the Z360. The company’s Quick Lok and Quick Fix mechanisms offer golfers the option to easily customize their carts with various accessories, such as the Rain Safe rain cover as well as GPS, umbrella and range finder holders. BIG MAX products were selected as an “Editor’s Pick” by Golf Digest at the 2015 PGA Show. Currently available at popular golf retailers throughout North America and at bigmaxusa.com, BIG MAX GOLF products showcase smart, functional and durable designs for the walking golfer.