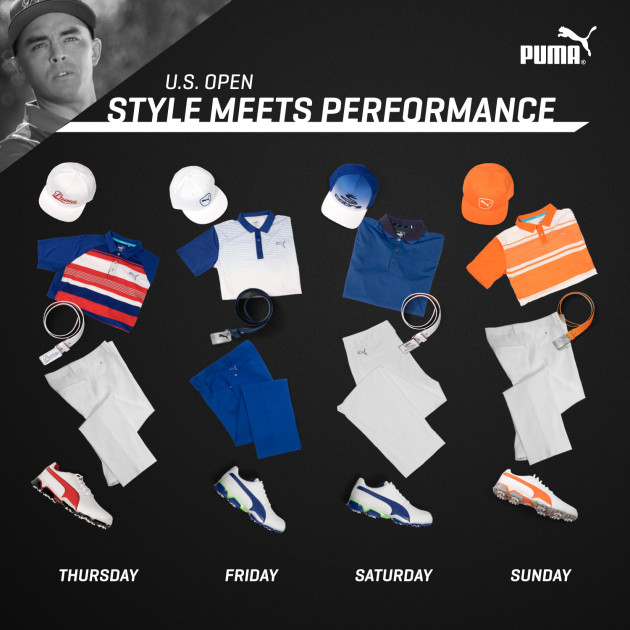 When Rickie takes on Oakmont next week for the US Open, he will do so in style – sporting apparel from PUMA Golf’s Spring Summer 2016 collection, available online now at cobragolf.com/pumagolf. The SS’16 collection blends style and function, incorporating novelty textures, sophisticated patterns and prints, and technical fabrications that help golfers look stylish while providing optimum performance no matter the weather conditions. 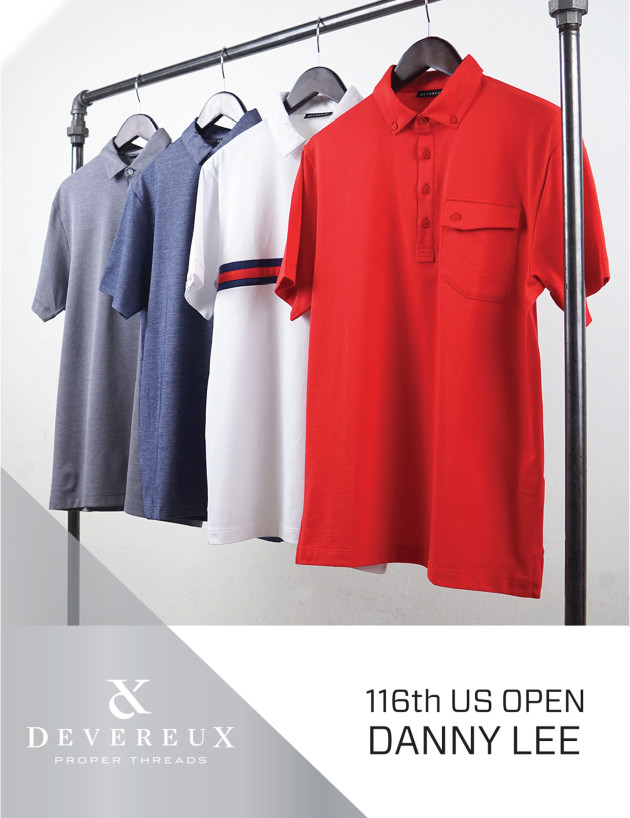 SCOTTSDALE, AZ. – Devereux, an innovator in properly styled men’s golf and resort clothing, today unveiled the style script for PGA TOUR player Danny Lee, for the 116TH playing of the U.S. Open. Lee will proudly showcase a Red, White and Blue color palette throughout the week in honor of one of golf’s most prestigious championships. Lee’s looks for the week will pull from Devereux’s widely heralded 72 Collection and also will provide a sneak peek at a couple items from the yet-to-be released Americana Collection that hits retail on August 1st.

Here are breakdowns of the specific outfits Lee will wear at Oakmont.

Thursday, June 16th:
• Lee will pair Devereux’s Andrew Polo in steel with the new navy colored Prescott Pant. The Andrew Polo is a beautiful lightweight oxford pique that has a heather effect and consists of 53% Polyester and 47% Pima Cotton. The Andrew is a uniquely crafted shirt that was designed with “Swing-Free Tailoring” for optimum on-course performance. The distinctive seams on this shirt allow for a golfer to complete a full turn without motion being restricted by side seams. This feature is sure to come in handy as Lee negotiates the infamously thick rough at Oakmont.

Friday, June 17th:
• On Day 2, Lee will once again turn to the fit and flexibility of the Devereux Andrew polo, this time in a navy hue. The Andrew will pair with Devereux’s Prescott Pant in white.

Saturday, June 18th:
• On “moving day” Lee will debut Devereux’s new Lucas Polo from the upcoming Americana Collection. The Lucas is a Lux-Tech Jersey polo that features a distinctive cut and sew self-fabric on the chest. Since it is the U.S. Open, Lee has chosen the red, white and blue color story in the Lucas. He will pair the Lucas polo with a pair of khaki Prescott Pants.

Sunday, June 19th:
• Lee will close out the event turning heads in Devereux’s signature Brunner polo in a new patriot red colorway. The Brunner, named after Devereux’s brother-founders Robert and Will Brunner, is a luxurious lightweight jersey constructed from 65% Pima Cotton/35% Polyester for the ultimate in hand and performance. The shirt features a distinctive 4-button placket, signature pocket and button-down collar. Lee will pair the Brunner with the Prescott Pant in white.

Devereux’s 2016 Spring and Fall collections of apparel are crafted for resort lovers and golf enthusiasts, and feature an array of polo shirts, pants, shorts, various luxurious layering items and headwear that are designed to seamlessly transition from the course to the street. For more information on Devereux’s entire selection of proper threads, visit dvrxgolf.com. 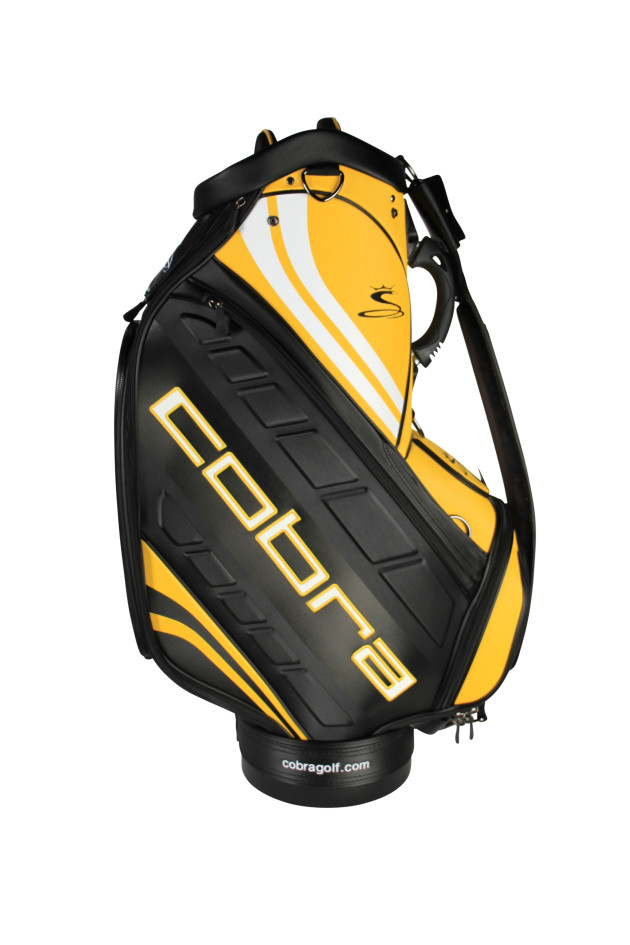 US Open Bag for Rickie Fowler and Bryson DeChambeau

COBRA Golf created a unique, custom staff bag that Rickie Fowler and Bryson DeChambeau will both sport at the US Open this week.  As this year’s US Open will take place at Oakmont Country Club, in Pittsburgh, the “Black and Gold” staff bag was inspired by the Pittsburgh Steelers team colors.

Beginning on Monday, COBRA Golf will be hosting a contest that will allow consumers the opportunity to win a replica of this one-of-a-kind staff bag. Consumers can visit cobragolf.com (http://www.cobragolf.com/guess-the-birdies-sweeps) or @cobragolf on twitter beginning Monday to find out more.

“Sweetgrass is one of my favorite courses that we play,” says Christine Meier, a Michigan State grad from Rochester Hills. “I enjoy the links style that it has, and it offers a lot of excitement with the island green par 3 and the reachable par-5 18th. But my favorite part of the tournament is the hospitality that we receive. I have a fantastic host family that I’ve stayed with for the past couple years who, believe it or not, are University of Michigan fans! But we put the Spartan/Wolverine rivalry aside for the week.”

Meier, who made her professional debut in 2015, was in the Top 100 on the Symetra Tour’s official money list through the first seven events she played this season. Top finishers on the money list earn their LPGA Tour card at season end. While pushing herself to reach the next level, Meier takes time to appreciate the journey.

“The casino and hotel pull out all the stops to make us feel welcome,” she says. “The Island Resort Championship is a really fun atmosphere, especially being a Michigan native, as well as a Michigan State alum. It’s fantastic that the Symetra Tour and the LPGA have embraced the amazing golf courses that we have here. It really helps grow the game in the state of Michigan and it’s never a bad thing to have tons of Spartans out at our events.”

Other players with state ties scheduled to participate in the Island Resort Championship are Laura Kueny of Whitehall, MI, who has won $79,176 in prize earnings thus far in her professional career, and Liz Nagel of DeWitt, a rookie last year who has earned $23,912 on tour thus far.

Voted by Golfweek raters to the “America’s Best Courses You Can Play” by state list, Sweetgrass will host a field of 144 players competing for a $125,000 purse. The Island Resort Championship is also part of the Potawatomi Cup, a series of tournaments involving courses with Native American Indian or Potawatomi tribal ties, with the top finishers in those events earning additional prize money.

Former Symetra Tour players have won hundreds of LPGA titles, including dozens of major championships. Dani Holmqvist won the 2015 Island Resort Championship with a 10-under-par total. Her performance contributed to her gaining full LPGA Tour playing privileges in 2016 with her season-long performance.

Three-day grounds passes to the 54-hole event are $10 and include entry into daily prize drawings. Children 17 years old and under are admitted free with a paying adult. Tickets are available at Island Resort & Casino and at local organizations such as the Delta County Junior Golf Association and the NCA Guarantee Scholarship Fund. For a complete list of outlets visit sweetgrassgolfclub.com/symetra-tour-2016.