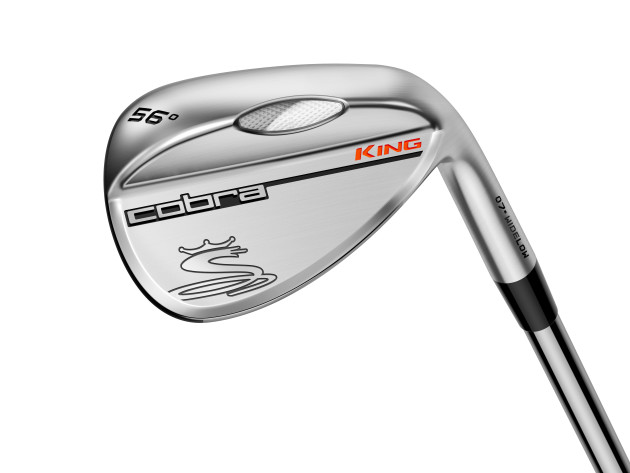 “We’ve been working on these new wedges for nearly two years to create the best-performing specialty wedges for golfers,” said Jose Miraflor, Director of Product Marketing at COBRA Golf. “Our COBRA engineers collaborated with our tour players, including Rickie Fowler, Jonas Blixt and Lexi Thompson, and conducted extensive research and testing on the KING wedges. Through that we’ve greatly improved wedge feel and versatility, giving golfers the confidence to hit a variety of shots around the green.”

One of the most important attributes of a wedge is feel and COBRA engineers used modal analysis to help tune vibrational frequencies (or shape) to deliver the softest feeling wedge to date. The KING wedges (MAP $149) are designed and manufactured using new Progressive Milled Grooves which feature wider grooves and gapping on higher lofted wedges, and traditional groove spacing on lower lofted wedges. The wider groove design allows higher lofted wedges (56-60*) to grab the golf ball imparting increased spin, and making spin more consistent throughout the wedge set. The new grooves are combined with Variable Face Roughness (VFR), a face milling technology that maximizes both RA (average roughness) and RY (max peak to peak depth) to the USGA limit.

To provide the ultimate wedge customization and performance, the KING wedges feature Three Sole Grind configurations that have been combined with the iconic COBRA Notch, which provides golfers with the ability to choose the perfect wedge to match their game and turf conditions. Each unique sole grind has its own set of advantages: the Versatile sole features a medium bounce (8-10*) to provide overall versatility on medium to firm turf conditions, the Classic configuration has a high sole bounce (11-12*) and a narrow sole for ease of use on all turf conditions, and the WideLow option has a low bounce (4-7*) with a wide sole that works well on medium to soft turf conditions.

NIKE FLYKNIT TAKES TO THE COURSE

A street-style staple, the Nike Flyknit Chukka was originally created in 2013, as part of the HTM line — an ongoing collaboration between NIKE, Inc. CEO and designer Mark Parker, Nike design legend Tinker Hatfield and style ambassador Hiroshi Fujiwara. A year later, the shoe cemented its sporting legacy on the medal stands of Sochi. Its appearance in golf, a first for Flyknit, brings a fresh aesthetic to the fairway and a sustainable twist to the sport.

A revolutionary manufacturing method, Flyknit enables designers to micro-engineer every stitch of the Chukka to create a featherweight, formfitting one-piece upper while simultaneously reducing manufacturing waste and materials. The upper is further enhanced by Nike Flywire technology for support and lockdown.

Next, to bring the silhouette inline with golf needs, a golf-specific Nike Free-inspired sole unit, with superior traction elements in the toe and heel, is added. And the upper is also skinned with a thin TPU layer for water resistance against light rain and morning dew.

The Flyknit Chukka has been worn on the course by Patrick Rodgers, Jamie Lovemark and Kevin Tway. It is available to the public in two colorways for men (black/white and racer blue/white) and women (black/white and pink pow/white) at nike.com and select retailers.

McIlroy, Fowler to Play Primetime Match Ahead of U.S. Open

For the first time in more than a decade, golf is getting another prime-time exhibition. Except this one will be live – under the lights.

Quicken Loans is finalizing details for a match involving Rory McIlroy and Rickie Fowler a week before the U.S Open, a person familiar with the negotiations told The Associated Press on Monday.

The person spoke on condition of anonymity because the match has not been announced.

The match would be at Detroit Golf Club on June 7, the Tuesday before U.S. Open week begins at Oakmont outside of Pittsburgh.

The first two hours would be televised live by Golf Channel, followed by the 9-11 p.m. slot shown live on CBS. It was not clear how many holes would be broadcast under the lights.

Unlike the Monday night matches involving Tiger Woods in 1999 and 2000, there would be a celebrity component with this exhibition. The person said it would be ”Team Rory” against ”Team Rickie.”

Still to be determined are the celebrities and the format.