With the Solheim Cup officially kicking off today, we chose to include a few extra Solheim Cup pieces. 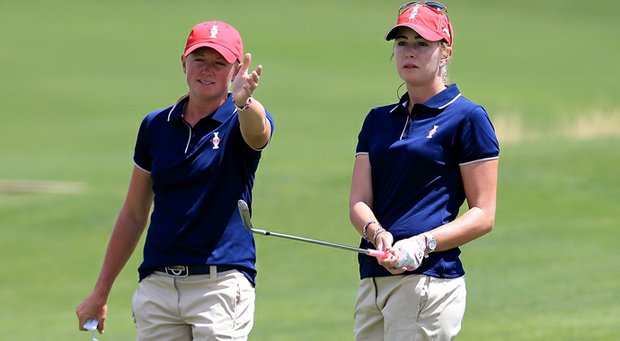 PARKER, Colo. – Stacy Lewis walked off the ninth green and took out a Sharpie. One by one she went down the line, signing hats, tickets, snapshots, even a European flag. Roughly 100 autographs in, Lewis stopped in front of a 14-year-old girl who lifted her gray T-shirt and asked, “Will you sign my back brace?”

Lewis spent a few moments chatting with the young girl, whose surgery is scheduled for September, and then waded through a dense Solheim Cup crowd to take the catwalk to the range. Fifteen families have requested private meetings with Lewis this week to talk about scoliosis. Because of the nature of this team event, and a jam-packed, sunup-to-sundown schedule, Lewis can’t possibly fit that in. But she’ll sign autographs and exchange pleasantries until there’s no one left. She gets it. And her popularity is steadily climbing.

Controversial or not, Wie was right choice for U.S.

PARKER, Colo. – Michelle Wie was the right pick. No matter what happens this week in Colorado, know that what Wie brings to the table – no matter how unorthodox – is good for Team USA and the LPGA. Wie needs the Solheim Cup as much as the cup needs her.

Given the fact that Wie hasn’t come anywhere near winning a tournament in recent years says more about the depth of the American game than it does about the one-time Hawaiian prodigy. Only three Americans have won on tour this year, so it’s not as if Wie was picked over a host of more qualified candidates.

Read the rest of the article HERE

PARKER, Colo. – Rookies might think they know, but as Paula Creamer can attest, there’s nothing like the first tee of the Solheim Cup. Especially the first time.

Rookie Lizette Salas will get to know quickly, teeing off with Stacy Lewis at 7:40 a.m. at Colorado Golf Club in the opening foursome session. Of course, Lewis might be the one who hits the first shot, but Salas will feel the enormity of the event early on. They’ll take on a pair of Swedes in Caroline Hedwall and Nordqvist.

Meet the man behind Dufner’s transformation

Cook’s latest prized pupil is someone who is slouch-shouldered and lumpy, mop-haired with dip camped under his chin soul patch, laid-back and lumbering, monotoned but dryly humorous. We speak, of course, of Jason Dufner, who could have been a member of Spanky and Our Gang, save for the monotone part.

Get fit in the C-Taper Lite and find the right KBS shaft for your wedges and hybrids
BOULDER, Colo. (August 16th, 2013). Today KBS introduces an updated version of the popular online KBS Fit System. This fitting program is found on the KBS web site (kbsgolfshafts.com/fit-system) and helps golfers find the best shaft for their game. Thus far in the program’s two year history, over 200,000 fittings have been completed.

Developed with input from our PGA TOUR representatives and fitting partners worldwide, the new Fit System uses seven multiple choice questions to determine the best fit in KBS shafts. These questions reflect an in-person fitting to provide the most accurate fit possible.