Lee Westwood apologized Monday to his sponsors and “true followers” for a three-hour, early morning Twitter rant in which he vented his frustrations after a 76 left him 13 shots behind winner Jason Dufner at the PGA Championship.

Westwood, who entered the final round within six shots of the lead in a bid for a first major championship title — in 63 tries — wrote at 4:11 a.m. ET he had grown tired of “sitting there taking it. Bring it on,” before later saying he hadn’t “chewed up a troll for a good while.”

Less than seven-and-a-half hours later, he issued the apology, also via Twitter.

Westwood lists 11 sponsors on his official website, including Footjoy, Ping, Titleist and UPS.

Westwood, in turns reflective, profane and accusatory in the 50-tweet early morning session, kicked it off by urging his followers — who Monday numbered more than 578,000 — to follow the account of Ian Baker-Finch, his South Florida neighbor and CBS Sports analyst whom Westwood reportedly has consulted with recently in an effort to improve his putting.

Westwood then took aim at his apparent Twitter critics, toward “minions” who “need to live from the inside out rather than the outside in.”

Ian Poulter chimed in several hours after Westwood’s spiel with a message of his own, saying they should have joined forces.

“You been having some twitter trouble,” Poulter wrote. “Let me know next time we both let them have it. Funnier.”

Poulter went on to criticize an apparent recent trend on tour of fans yelling bizarre phrases after players’ tee shots.

Westwood capped his rant by clarifying his comments were authentic, but that he had grown bored and was signing off.

Among the other tweets for Westwood, who spent five weeks in 2010 and ’11 as the world No. 1 but who entered the PGA ranked 12th, at least two of which have since been deleted from the account:

• Come on you girly boy trolls! I’ve only won just over 2 mill on course this year! Need you to keep me entertained a bit longer than this!

• @tmckeever89: @WestwoodLee Lee what you make of monty slagging your game in commentary? Thought it was bit harsh..”who? 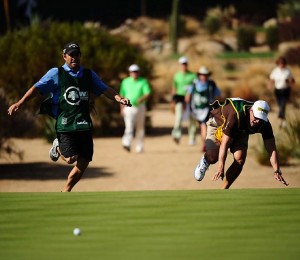 After the outpouring of complaints regarding spectator of behavior, it appears that the PGA Tour is responding by trying to take control of all the fun. The PGA Tour has banned all Caddy Races on the stadium Par-3 16th hole at the Waste Management Phoenix Open. In recent years, fans seated at the hole would bet on which caddy would step foot on the green first and this evolved into some caddies actually racing in a each other in a full sprint to be the first to the green, much to the delight of the 20,000 plus fans seated in the stands. In some cases, the caddies would drop the bags and leave them for their bosses to carry up themselves.

Well, it sounds like the fun is over. Hopefully, so are all the “Baba Booeys.”

It has been no secret that the European Tour has been struggling financially. This has been a major reason that European stalwarts have been making the jump over to the US to join the PGA Tour. Maybe this rumor will turn out to be true, and maybe it won’t, but it will certainly be interesting to see where it goes.

You can read the article HERE.