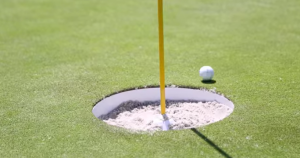 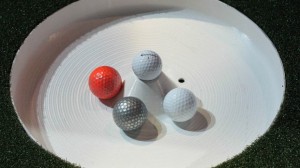 We’ve all had those days – or dreamt of them at least. You know, those mornings on the course when, regardless of how the drives and irons are playing, the short stick rolls true, breaking right, back left, tracking perfectly like a birdie-seeking missile and the hole seems like it’s three-feet wide, like we couldn’t miss it if we wanted to.

Some might call that heaven. If you’ve experienced it, then you know, and it’s part of what keeps you coming back for more, what gets you thinking, falsely, “What’s so hard about this game?”

But for those who aren’t as fully dedicated to the time and expense of good golf, the hobbyists and leisure seekers, the modern human whose attention span is narrowing by the second (i.e. the millions of people the PGA is trying to keep interested and invested in the game), well, for this demographic the traditional 4.25-inch cup can be a torment, a deterrent, a reason to do something more enjoyable with their precious time.

It’s no secret that golf has plateaued in America. After the explosion of interest and enthusiasm sparked by Tiger in the late 1990s and early 2000s, the number of people playing golf has stagnated, leveled off, maybe even started to decline.

And while that doesn’t bother most people, there are those tasked with spreading interest in the game, with luring players of all types to stay with it, to spend dollars and time and passion on playing and growing the sport, and it is some of these people who came up with the idea of a 15-inch hole.

Hack Golf is a think-tank of sorts started by TaylorMade-Adidas that asks, “How do we make golf more fun for everyone?” With plenty of investment and no shortage of ideas, Hack Golf has started bringing attention to a 15-inch golf hole, even recruiting pros like Sergio Garcia and Justin Rose to play exhibitions and drum up interest in what could be a more accessible, more enjoyable game for certain skill levels.

With a wider hole on the greens, the game gets easier, scores drop, playing time shortens, fist pumps become more frequent, fewer clubs get thrown into the pond. When Hack Golf debuted the concept at a course in California earlier this year, they reported that it cut an hour and a half and 10 strokes from the average golfer’s round.

Swift scores nothing to sneeze at

Most purists and serious players scoff at the notion, and that’s to be expected. Golf is hard — it takes serious discipline and work and dedication to play well, and with that comes well-deserved pride.

But by the same token, golf is hard, really hard, and most players spend their entire lives and thousands upon thousands of dollars just trying to get marginally better. Would it be the worst thing in the world if there were a few courses around where the pressure lessened, the difficulty eased, and the game got a little more fun for the infrequent golfer?

Only time will tell if Hack Golf gets some traction for this and/or other concepts, but it’s at least got the golf world talking. And regardless, debating the future of a sport built on patience in an increasingly digital world makes for some interesting 19th hole discussions.

If a wider cup sounds enticing, keep an eye out for Hack Golf events near you. Maybe you’ll stick with it and in time take on the real thing.

If you’re a purist, keep rolling it at the small cup, waiting for those days that dreams are made of, when the hole only seems like it’s 15 inches wide.

What do you think?

Contributing Editor
James is an Atlanta-born, Chicago-living writer and journalist who splits his time between marketing, fiction/nonfiction, and valiant attempts to harness his emotions on the course.