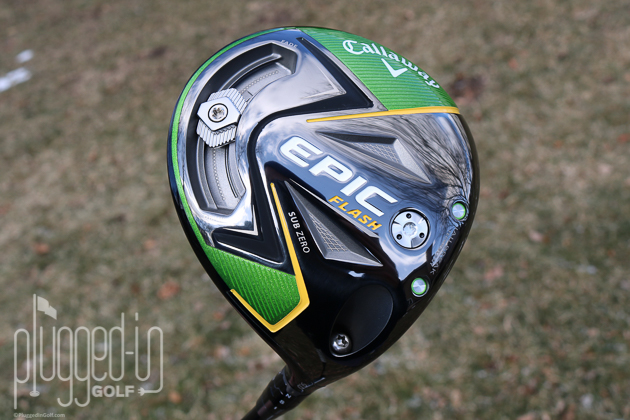 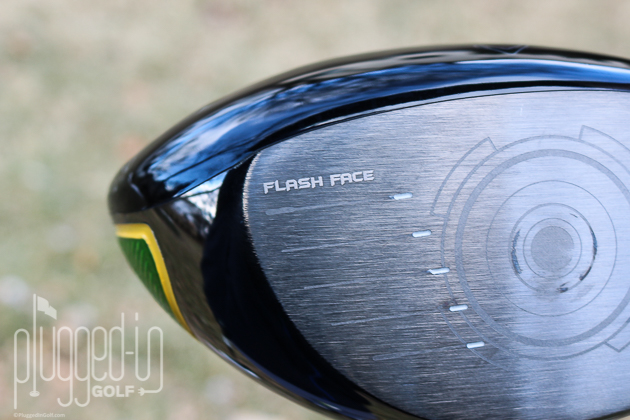 For the last couple seasons, a Sub Zero version has become a staple of Callaway’s driver line up.  Players who struggle with high spin have flocked to these models as they’ve proven to produce stronger ball flights and longer drives.  What’s new about the Epic Flash Sub Zero is that dropping spin no longer requires losing forgiveness. 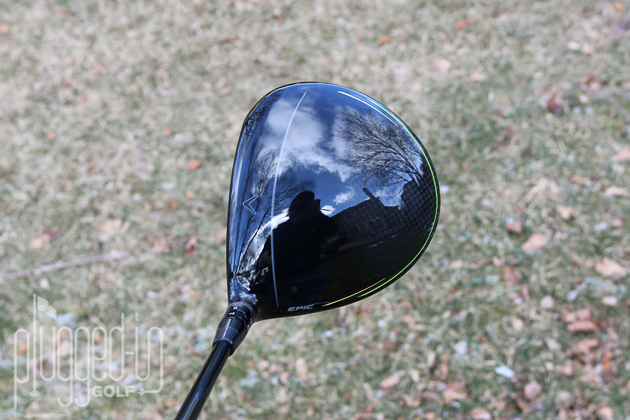 When I set down the Epic Flash Sub Zero, it was love at first sight.  It’s compact without being intimidating, and the size and shape are perfect to my eye.  That’s complimented by one of the best crown design’s going: Callaway’s black-to-carbon-fiber fade. 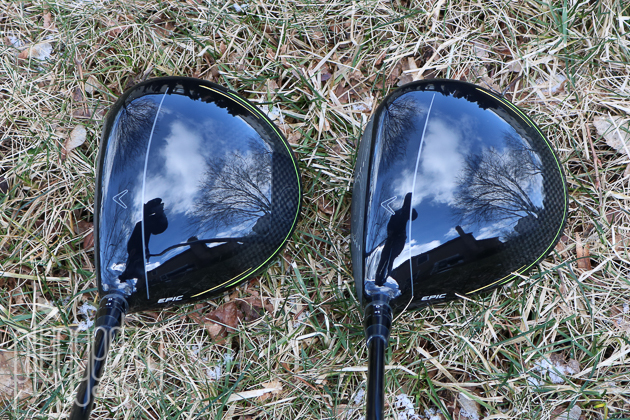 Side by side, you can see that the Sub Zero is much shorter from front to back than the standard Epic Flash.  Outside of this size difference, the drivers are identical.  Both carry the green and gold color scheme from the head cover through the grip in a way that gives it visual pop without being gaudy. 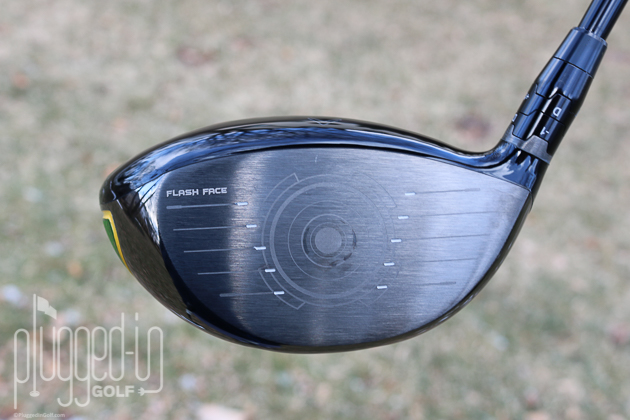 Just like the standard version, the Epic Flash Sub Zero driver has a conventional impact sound.  It’s not quiet or loud, not shrill or bassy.  The ball meets the face with a “crack” that sounds fast without hurting your ears.  The Sub Zero is slightly higher pitched than the standard Epic Flash, but the difference is minute.

With a more forward center of gravity, the Epic Flash Sub Zero provides a more solid impact feel to my hands.  Feedback through the hands is good, letting you know immediately how well you struck the shot. 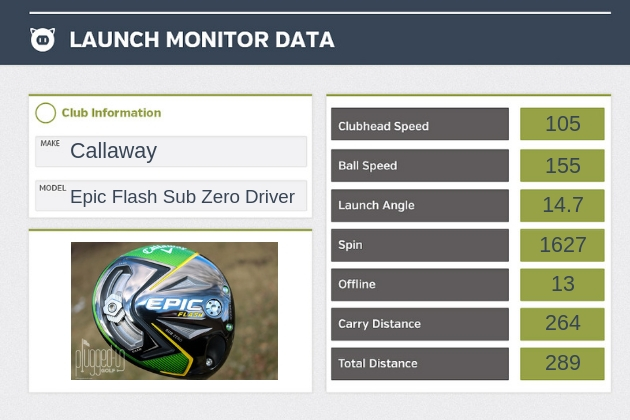 In the past two generations, the distinction between the standard Epic or Rogue driver and the Sub Zero version was pretty stark.  The Sub Zero provided lower spin at the cost of forgiveness; higher handicap players need not apply.  As much as I loved the look of the Epic Flash Sub Zero, I was afraid that same distinction would be present.  It turns out my fears were misplaced.

As I discussed in my review of the Epic Flash, that driver is at the very cutting edge of forgiveness.  To my delight, the Epic Flash Sub Zero is right there with it.  My average ball speed was just as high with the Sub Zero as with the standard Epic Flash.  Similarly, the launch and spin were very consistent leading to repeatable distance shot after shot.

One thing that merits mention is that the standard Epic Flash and Sub Zero versions feel different in the swing because of the different centers of gravity.  For me, neither was uncomfortable but the Sub Zero was clearly preferable.  If you try one version and don’t have success, make sure to try the other. 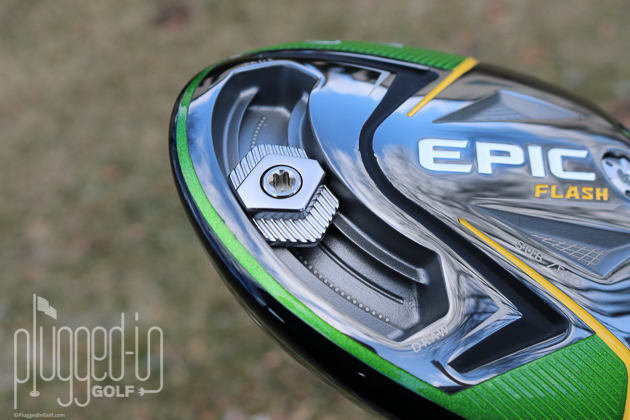 The calling card of the Sub Zero line is lower spin, and the EFSZ delivered there, too.  On average, my spin rates were 300 RPM lower with the Sub Zero than the standard Epic Flash.  As always, it’s important to note that your results may vary, and you should work with a fitter to find your ideal set up.

Adjustable Perimeter Weighting is paired with a new, lighter OptiFit hosel to give players the ability to dial in their ball flight.  The 16 gram sliding weight made a noticeable difference for me, taking the sting out of my worst hooks and putting a gentle fade on my better swings. 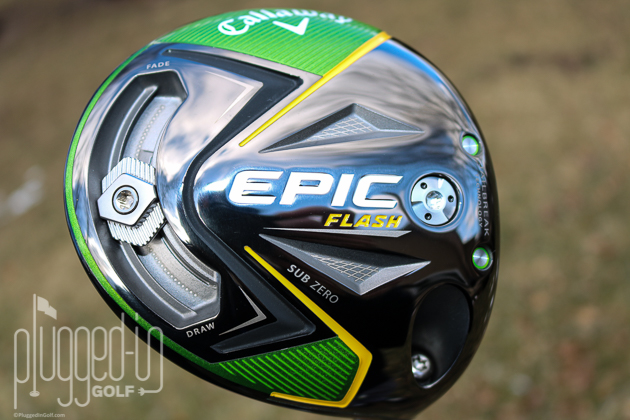 The Callaway Epic Flash Sub Zero driver is poised to wreck my happy home.  I’ve had a very solid relationship with my driver for over a year, but with its exceptional looks and surprising forgiveness, the EFSZ is making my eyes wander.  Don’t be surprised if, when the snow melts, you see this driver in my bag. 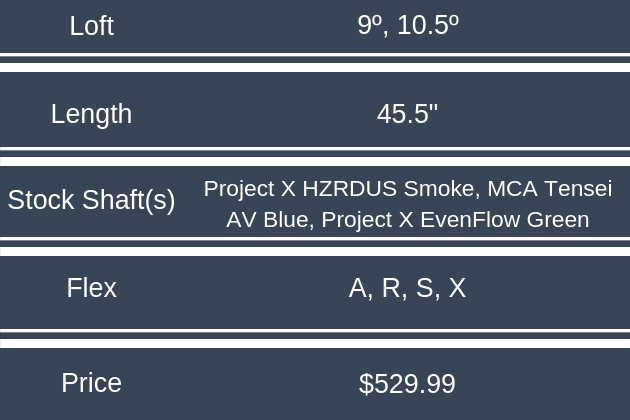