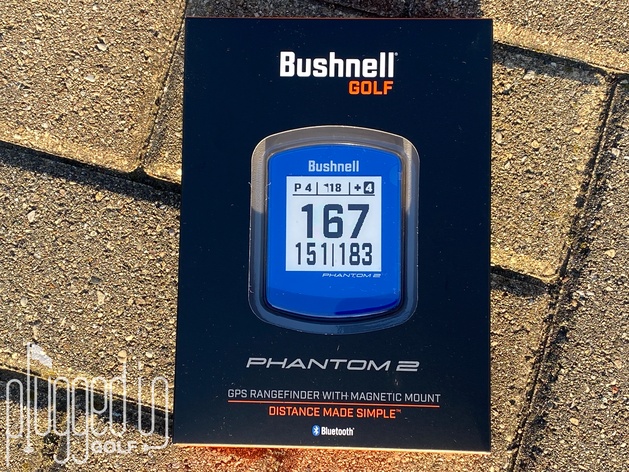 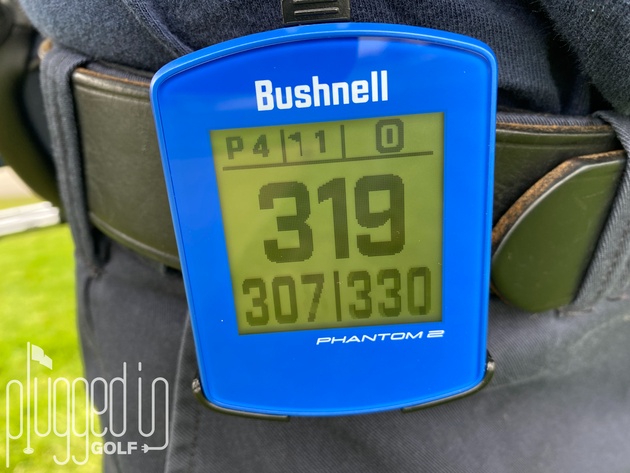 In golf, Bushnell is synonymous with rangefinders like the the Tour V5 [review HERE], but they’re also a significant player in golf GPS.  The Wingman [review HERE] is their headliner, but their Phantom is a fan favorite for its simplicity and low cost.  I took the Phantom 2 to the course to see how much performance they could pack into a value-priced device. 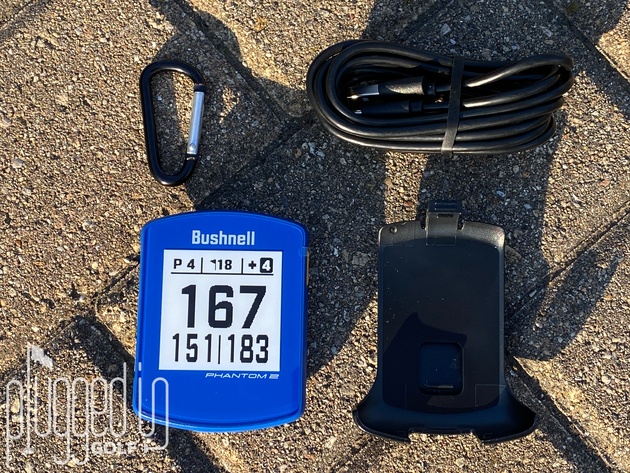 When you unbox the Phantom 2, you’ll find the GPS device, a USB C charging cable, belt clip with carabiner, and a quick start guide.  As with many modern products, a full manual is only available online.

Using the Phantom 2 is fairly simple.  There are four buttons: three on the left, one on the right.  The left buttons scroll up, down, and select while the right button brings up menus.  The buttons are not labeled in any way, but I found them reasonably intuitive.

When you get to the course, power it on and select “Play Golf.”  It will take a couple minutes to locate the satellites and provide you with course options.  Once you’ve selected your course, you don’t need to touch the Phantom 2 if you don’t want to as it automatically advances holes. 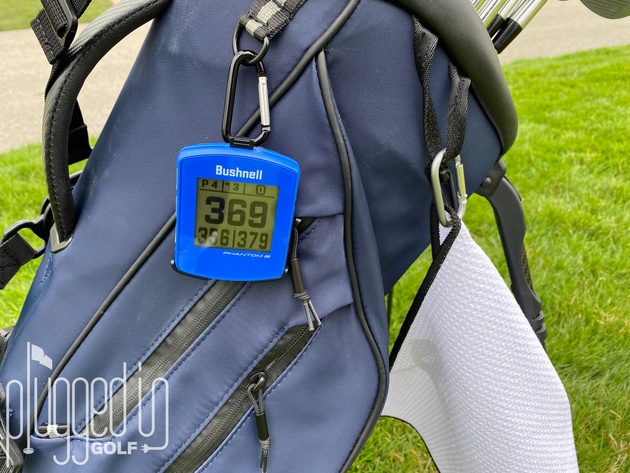 I tested the Bushnell Phantom 2 side-by-side against two similarly priced GPS units and found it comparable in speed and accuracy.  There was never more than a two yard discrepancy between the Phantom 2 and posted yardages, and those were rare.

One thing that separates the Phantom 2 from other similarly priced units is its size.  It’s considerably larger than the Shot Scope H4 or Garmin Approach G12.  I found the Phantom 2 just on the edge of acceptable for wearing on my hip.  Smaller golfers may find it too bulky.  The size is a plus, however, if you put the Phantom 2 on your cart with the BITE Magnet or clip it to your golf bag.  I do like that the Phantom 2 gives you numerous carrying options. 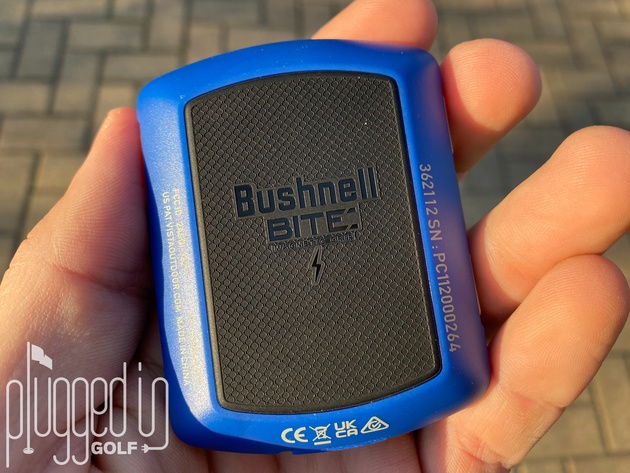 A stronger BITE Magnet is one of the upgrades that Bushnell touts with the Phantom 2.  Other improvements are a larger display, more mapped hazards, and greenview with multiple pin locations. 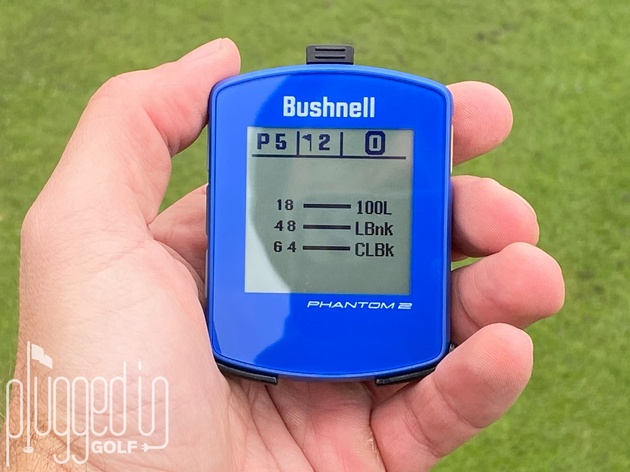 The hazard display on the Phantom 2 is good.  It lists 100, 150, and 200 yard lay up distances with bunkers and water inserted where appropriate.  It can also provide yardages to the hazard and to clear it.  The biggest positive is that it lists all hazards on one screen.  However, I prefer the Garmin G12 and Shot Scope H4 for the way they clearly show which hazard is being described. 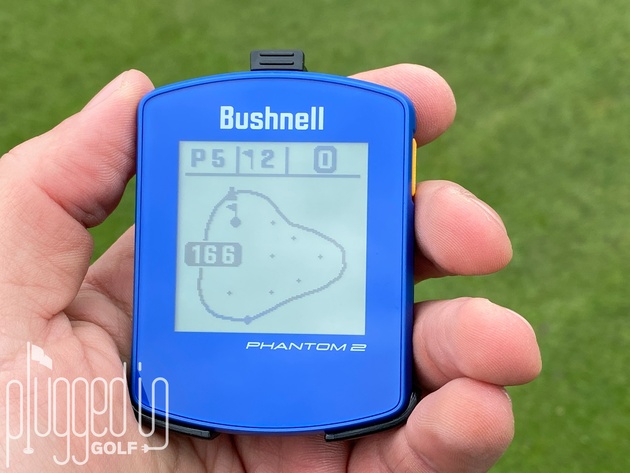 The other new feature is green view.  You can move the pin among several pre-selected locations to get a better idea of the yardage to the flag.  This is a strong feature, but be careful using it if you don’t have a pin sheet or decent course knowledge.  If you aren’t sure where the flag is, make the safe play to the center yardage. 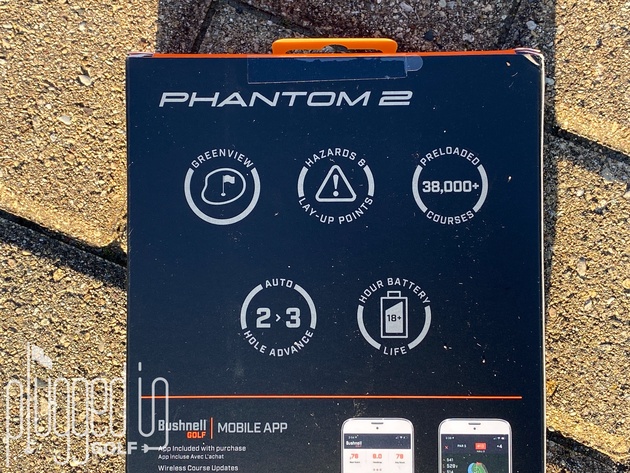 The last standout feature is the battery life.  Bushnell states that the Phantom 2 can last over 18 hours on a single charge.  For players that hate having to charge their device between rounds, this is a big plus.

Finally, the Phantom 2 GPS comes in four colors: black, neon orange, grey camo, and royal blue.  While I like the royal blue that I tested, I prefer neon orange as it’s the one I’m least likely to leave behind. 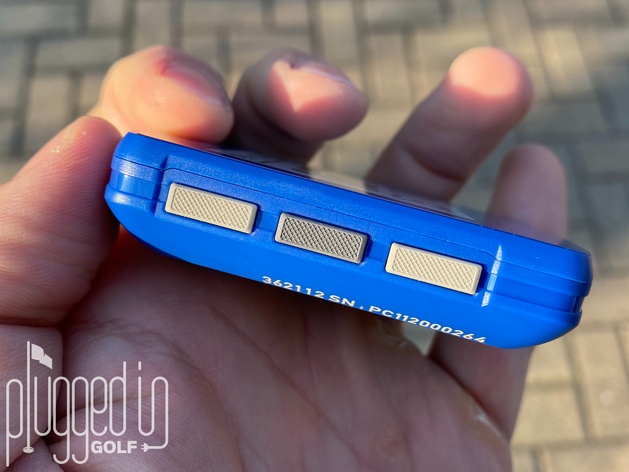 At $130, the Phantom 2 is the same price as the Shot Scope H4 [review HERE].  While the display of the H4 is smaller, it has a color screen and Shot Scope’s industry-leading shot tracking.  In 2021, I think the Phantom 2 is a great value.  In 2022, I would opt for the H4 unless A) I absolutely didn’t want shot tracking and B) I wanted the larger, non-color display.

Bushnell warranties the Phantom 2 against material or workmanship defects for one year. 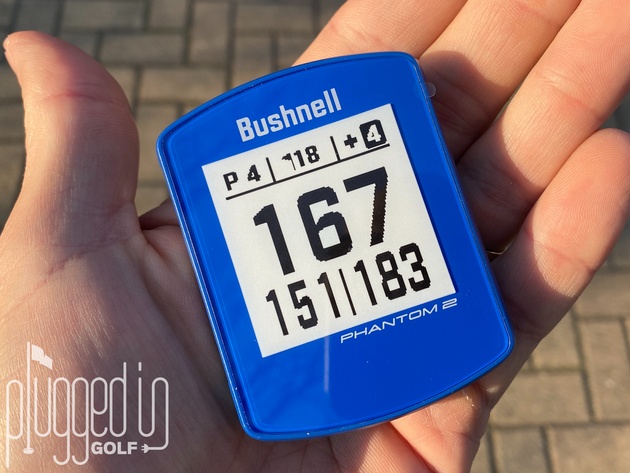 The Bushnell Phantom 2 golf GPS delivers good speed and accuracy for a reasonable price.  You won’t get a fancy screen or advanced features, but it can help you play faster and score better.  If the size of the Phantom 2 fits your preferred carry method, this is a solid buy.