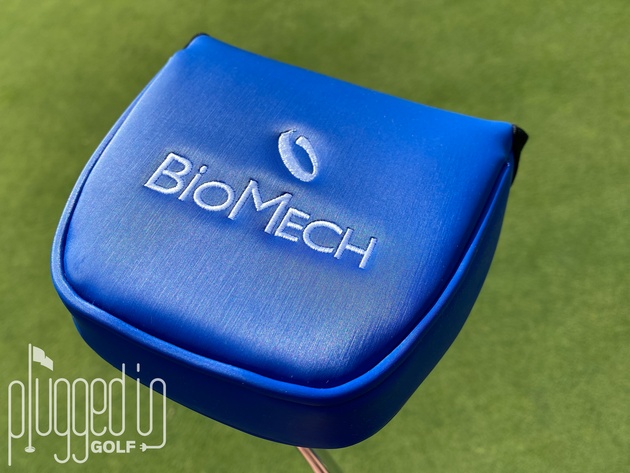 The BioMech Acculock Putter is the most comfortable and best armlock putter I’ve ever tried, by a wide margin.  Everything about this is unusual, which might be ideal if you want to shake up your putting. 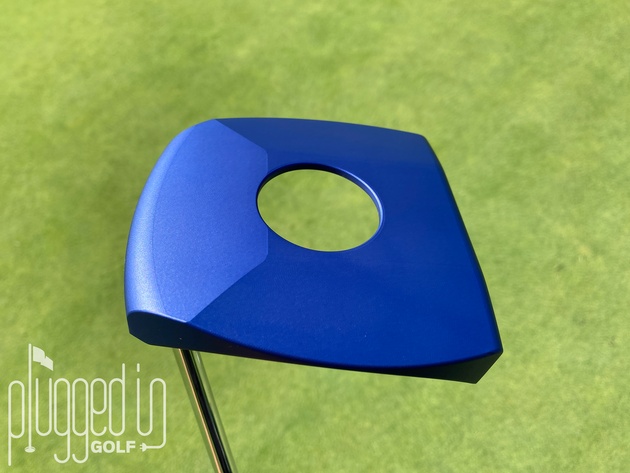 Armlock putting has been a hot topic in golf with some claiming that it’s an inherently easier way to putt.  While there’s a common sense appeal to limiting the moving parts in the putting stroke, most armlock putters are nothing more than longer versions of standard putters.  The BioMech Acculock is different – a putter that’s entirely designed around the armlock stroke.  I tested one to see if this is the future of putting. 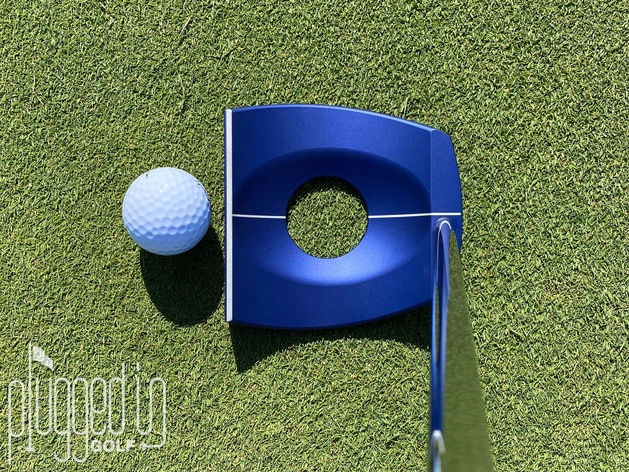 Do I need to state this obvious?  This isn’t your granddad’s Bullseye.  To start, the BioMech Acculock is big – approximately 4.5″ square.  There’s also the color.  The Acculock is available in black or silver, but when a putter looks this unusual, I think blue, pink, and burgundy are better options.

There’s also the small issue of the shaft being attached to the back of the head.  That’s going to earn some sideways looks on the putting green.  Finally, I’ll note the hole in the middle of the head which is surrounded by a larger indentation. 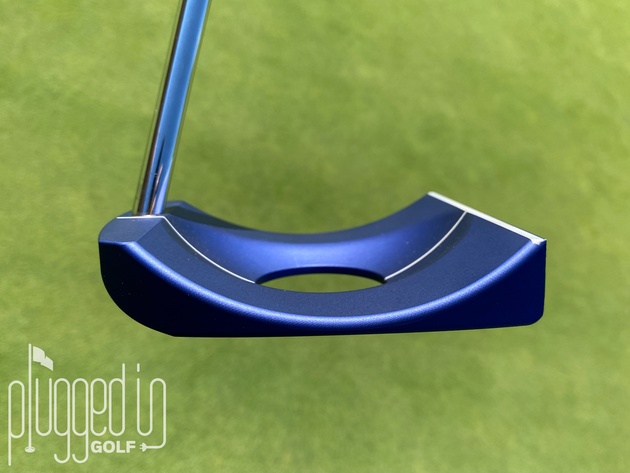 Here’s the funny thing about the Acculock: because nothing about it is conventional, it works.  If you took an Anser and shoved the shaft into the flange, it would be a disaster, but this putter throws every convention out the window to be something completely original.

Before moving on, I need to mention BioMech’s Optical Alignment System.  BioMech advises that the golfer put their dominant eye over the hole.  From this position, they can use the perpendicular white top line and the divided sightline to aim.  Also, because the shaft is out of the way, the golfer has an unobstructed view of the ball, putter, and path to the hole.  In my testing, I found the BioMech very natural to aim, in part because of the open stance that the putter promotes. 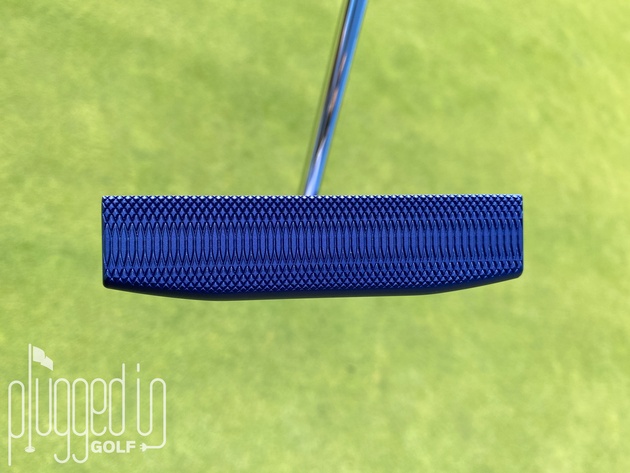 The BioMech Acculock is milled from aerospace-grade aluminum.  Aluminum putters typically aren’t my favorite when it comes to feel, but the Acculock isn’t bad.  It’s firm with limited feedback, but it’s definitely not a deal breaker.

Impact is fairly quiet, but the sound of impact provides excellent feedback on strike quality. 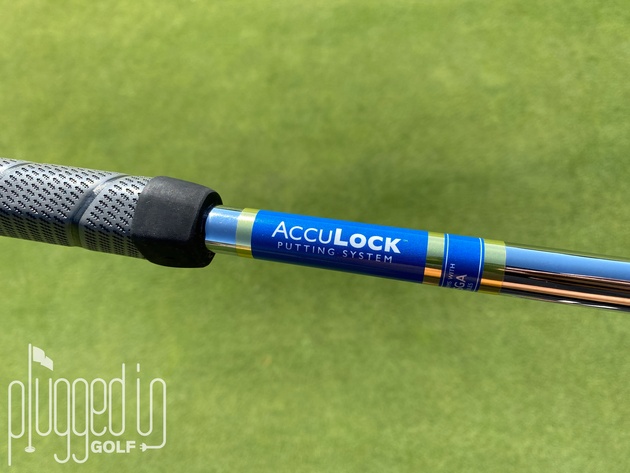 BioMech built the Acculock putter around a particular method, so let’s first describe what that is.  They advise a slightly open stance, a conventional grip (right hand low), the putter grip resting on the left forearm, and the left shoulder sitting naturally higher than the right.  Per BioMech, this method “stabilizes the hands, arms, and shoulders,” engages the core muscles, and “reduces and/or eliminates hand, arm, and shoulder movements, resulting in more accurate putts.”

All that sounds pretty good, so I was eager to see what it did on the green.  The first thing I noticed – and I can’t overemphasize this – is how comfortable the Acculock is to putt with.  I’ve tried a handful of armlock putters and found them, at best, stressful on my wrists and forearms.  With Acculock, I could putt all day.  Not only does the grip rest on my forearm without any extra bending or flexing, the putter allows me to stand more upright.  Additionally, the putter grip feels more secure in my forearm compared to other armlock putters, probably because it sits there so easily. 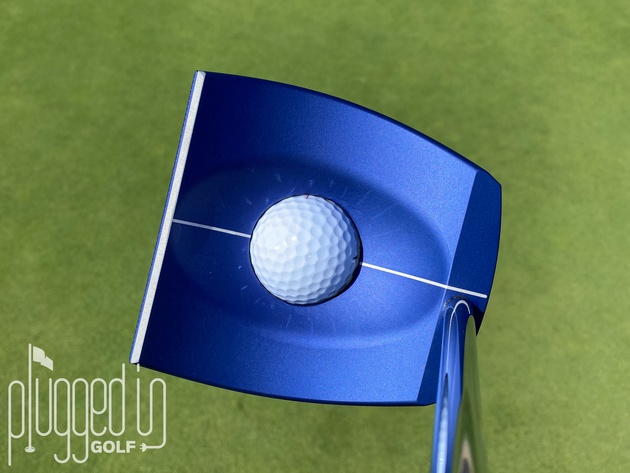 When I first took Acculock to the practice green, I had the typical new putter experience: made a lot of putts, then missed a lot, and finally went back to my normal level of putting.  Nothing shocking, good or bad.

The next time I tested Acculock was indoors on a ten foot putting mat with a reduced hole.  During this session, I was more focused on getting into BioMech’s recommended set up and using my shoulders and core to power the stroke.  The results were unreal.  I was making 8 or 9 out of every 10 putts into a 3.25″ hole.

I went back to the practice green with Acculock and continued to see impressive results.  The only negative that I can report is that I needed some time to get a feel for distance control.  I’d also note that if you gave me a life-or-death putt, I’d still reach for my normal putter because I haven’t had enough time with Acculock to build up the level of confidence I have in my gamer.

My ultimate conclusion on the BioMech Acculock putter is that it is easily the king of armlock putters.  Additionally, I do think there’s something to be gained from this particular combination of method and putter.  That said, it’s not an instant fix.  You need to commit to the method and put in the work to make it automatic and to build your confidence with it. 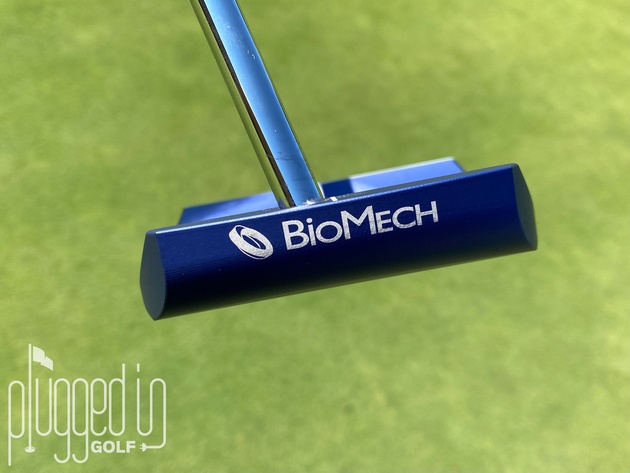 If you’re thinking about making the switch to an armlock putter, you owe it to yourself to check out the  BioMech Acculock.  Currently, the putter is only available through the BioMech website, but the company does offer a refund if you find that it’s not for you.