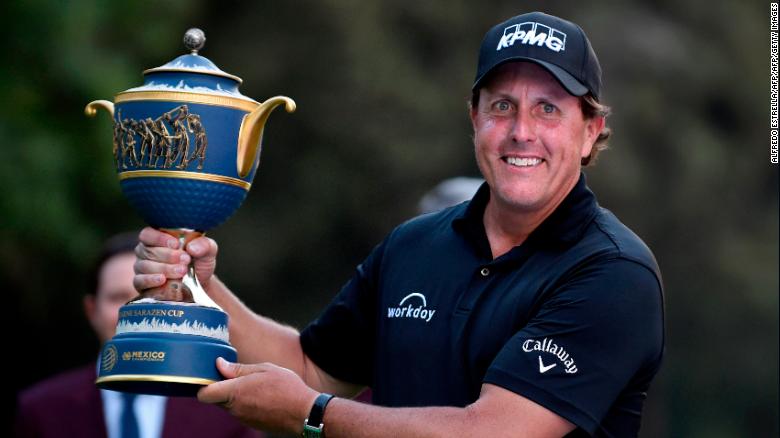 Naucalpan, Mexico- Phil Mickelson claimed his first victory on tour since 2013 after out-dueling Justin Thomas in a one hole playoff.  The WGC kicked off its first event of the season at Chapultepec Golf Club on Thursday with a wide array of golf’s best vying for another tour victory. The course sits at an altitude of more than 7,600 feet above sea level and many golfers had difficulty with judging ball carry and club selection. Others just could not figure out their swings and felt uncomfortable all weekend. Earlier in the week, Justin Thomas even commented, “It’s probably the worst I’ve felt over the ball in my life.” That didn’t stop him from making a dramatic two day move to the top of the leaderboard.

Justin Thomas sat atop the leaderboard as he strolled into the clubhouse after spinning an eagle on the 72nd hole and making a near impossible comeback to the top spot. Thomas was even after day two and eleven shots off the leader Shubhankar Sharma. Then, the magic happened. He shot a course record 62 on Saturday and then moved up 9 spots on Sunday with a 7-under 64. Mickelson, on the other hand, was all over the course throughout the weekend, hitting out of bushes, bogeying the easiest hole on the course, and even hitting a fan. But Phil continued to stay in the hunt with his stellar putting. Mickelson was feisty, goofy, and even engaging with fans and speaking fluent Spanish.

This has always been what we expect from Phil, except it usually ends with a second place finish. Not this time. Mickelson would birdie 15 and 16, which included a 20-footer on the latter. He would then go back-to-back pars to set up yet another playoff. Phil had the chance to close things out with a short putt for birdie on the par-3 17th, but lipped it out and gave Thomas a chance. Thomas would hit a less than mediocre chip and miss a six-footer to give Phil the par putt for the win and his 43rd tour victory. Mickelson and Thomas would exchange a few words before Phil could enjoy his first victory in just over four and a half years and comment on the coming weeks. “I believe more is to come, and feel I’m starting to play my best golf.”

It was a week off for Tiger after his 12th place finish at The Honda Classic. Although he was not golfing this weekend, he announced he would be competing in back-to-back starts at The Valspar Championship and Arnold Palmer Invitational, and would be making a total of five starts before The Masters.

Notables in the field:

Last year’s champion, Dustin Johnson (T7) stuck around the top 10 for most the weekend but never made a push to the front. Sergio Garcia (T7) looked great all weekend long but couldn’t get things going around the greens. Bubba Watson (T9) wasn’t able to make it back-to-back events while he struggled on the greens and showed more frustration than usual.

If the world hadn’t heard of Shubhankar Sharma by now, (Phil Mickelson mistakenly thought he was a reporter) they should expect to hear his name for years to come. Sharma proved his rise in the power rankings and popularity among the golf community are for real. Sharma sat atop the leaderboard multiple times throughout the week and never looked like the moment was too big.