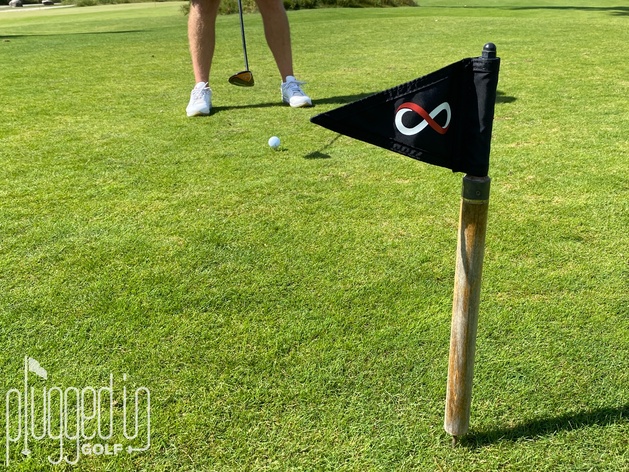 The Loop golf course, a reversible design at Forest Dunes in northern Michigan, is something every golf course architecture fan needs to see.  The firmest, fastest course I’ve ever played. 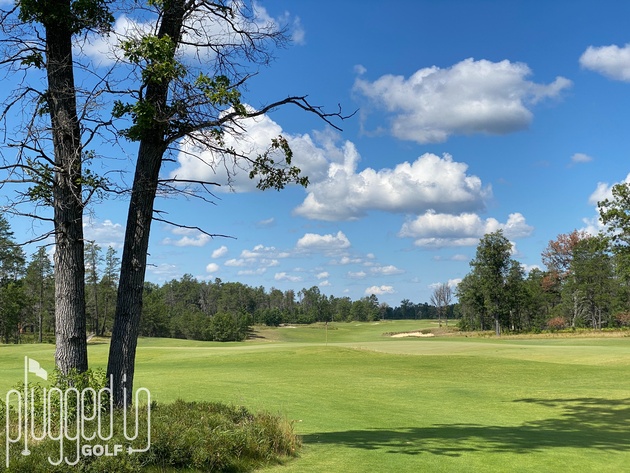 Since it was announced, The Loop has been a fascination among those interested in golf course architecture (GCA).  Tom Doak created 18 greens that play in two directions, making two courses – The Loop Red and The Loop Black.  We made the journey to Forest Dunes to find out if these courses are great golf or just a gimmick. 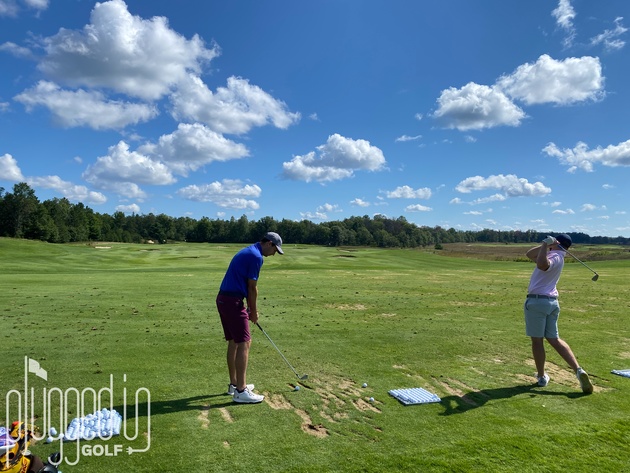 The practice facilities at Forest Dunes are solid.  There’s a good range with ample grass hitting area and several target greens.  It is a decent walk or cart ride to get from the range to the first tee.

Near the first tee there is a putting green large enough for a foursome.  The putting surfaces at The Loop are quite different than those at the Forest Dunes course, so you’ll want to warm up on this specific practice green. 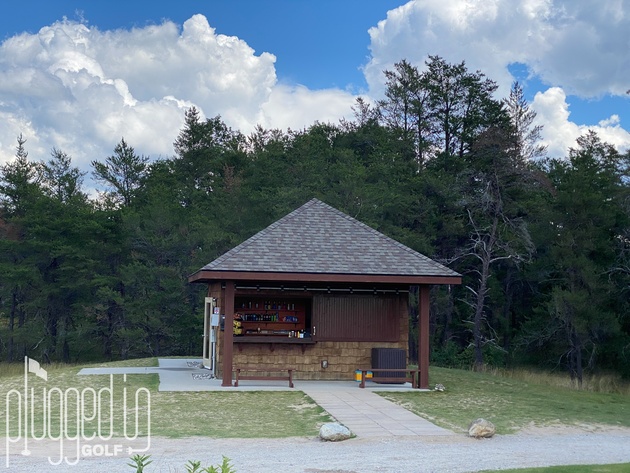 When it opened, The Loop was a walking-only course.  Forest Dunes offers free push carts and had caddie service, but, according to our starter, were seeing very few rounds played.  In response, The Loop has been opened up to golf carts.  If you’re able, I’d recommend walking as The Loop is very compact and doesn’t feature many steep elevation changes.

On the course, there’s a turn stand (above) after the 9th hole.  It has restrooms, drinks, snacks, and hot dogs.  There’s also a stationary beverage cart at the intersection of holes 5 and 13 if you need an additional refueling opportunity.

If you need more golf in your day but can’t handle a full 36, Forest Dunes offers the Bootlegger – a 10-hole short course – and the Hilltop Putting Course.

Forest Dunes does offer several types of overnight accommodations.  We were not able to stay on property, so I can’t speak to their quality.  The customer service throughout the resort was adequate. 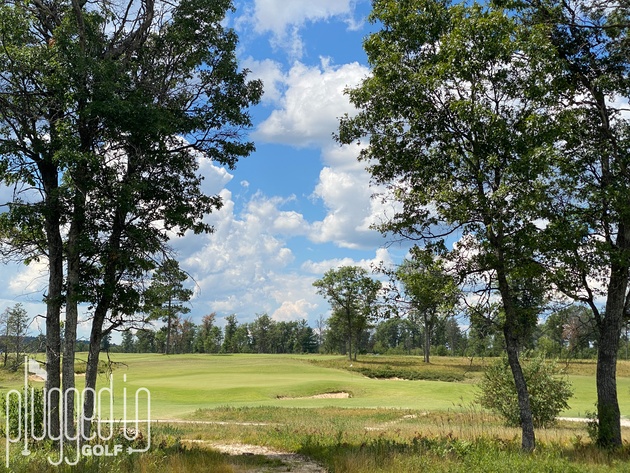 The Loop does not meet the standards of conventional golf course beauty.  It’s not green and lush, there’s minimal elevation change and no water, and the trees are almost exclusively at the perimeter of the course. 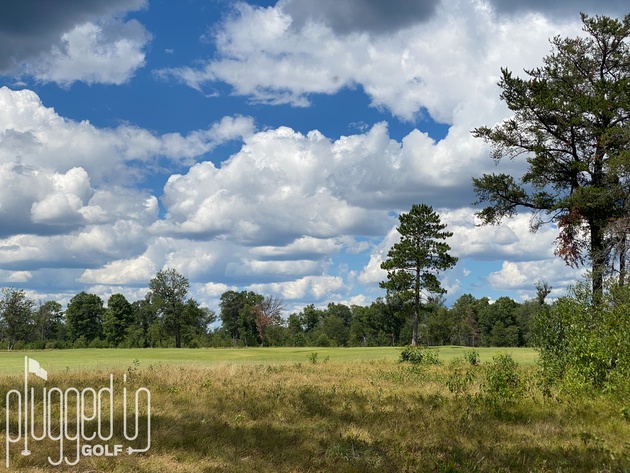 However, for the GCA nerds who believe brown is beautiful and focus on the subtle undulations, The Loop is lovely.  There are long views everywhere.  Though the course isn’t congested, you regularly have other holes in view.

One negative that must be mentioned here are the gnats.  I don’t know if their presence is limited to August when we played, but they are everywhere.  They don’t bite or sting, but they are an irritant. 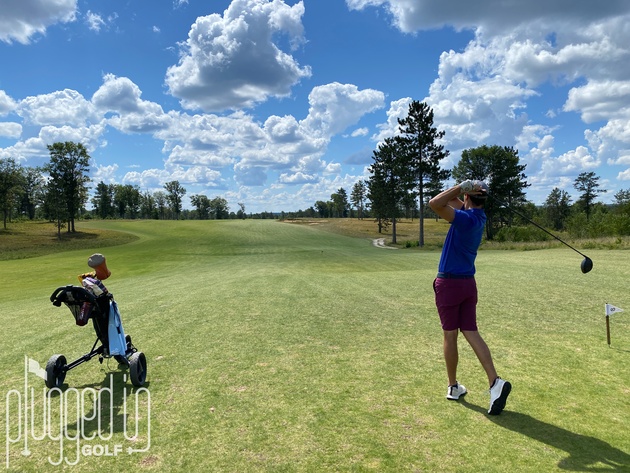 The one bit of difficulty off the tee is the visual deception.  Most of the fairways swell and recede in such a way that you’re unsure how far away anything is.  This can be a bit disconcerting when you’re trying to visualize your shot. 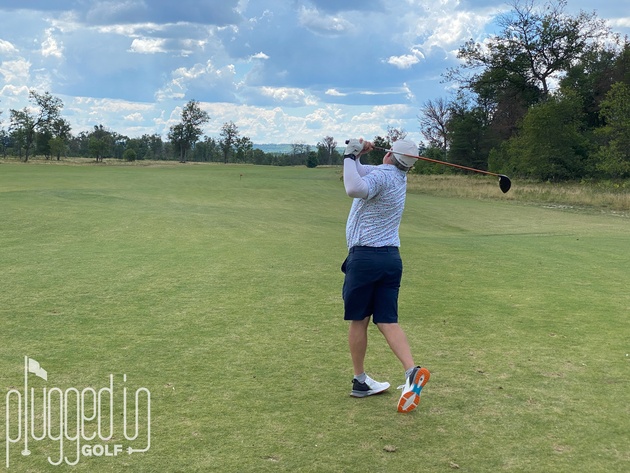 Something that will be novel to many golfers is the way the ball bounces and rolls in the fairway.  The Loop is the firmest course I’ve ever played, so you need to plan for the ground game.  This course is quite gentle off the tee – the fairways don’t tilt toward hazards – but be careful of the “backwards hazards.”  There are a couple spots where a bunker is angled such that it’s visible on the Red and nearly invisible on the Black, or vice versa.

Finally, unless you have supreme length and shot control, play the middle or front tees.  Knowing that your drives will run out, you may be tempted to stretch yourself to the back tees at 6,805 or 6,704 yards.  If you want an enjoyable round, this is not the play.  As I’m about to explain, you are going to want the shortest possible club in your hand when you hit your approach shots. 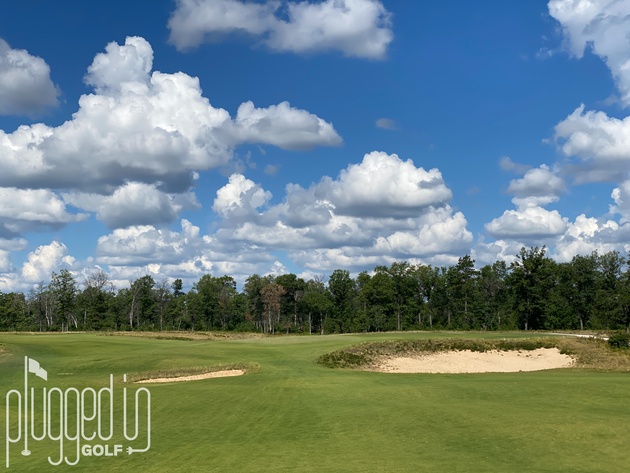 The Loop starts in earnest after the drive when you’re contending with the greens.  When your approach shot lands on the green it sounds like a tom drum, and without immense height and spin, the ball won’t stop where it landed. 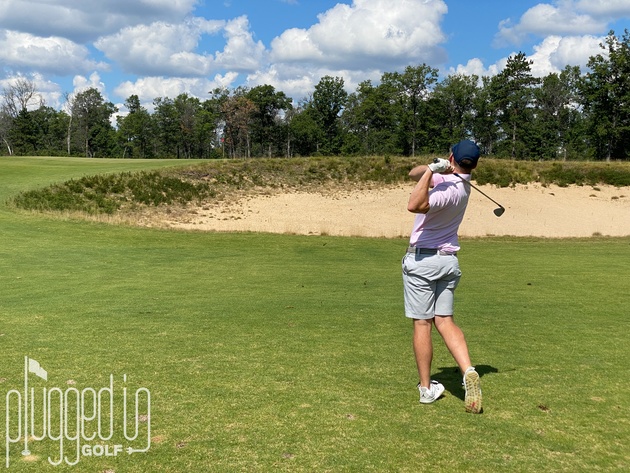 Let’s back up before we dive into the greens.  In the fairway, you can expect a decent lie.  It will be very tight, and even the fairways can be patchy in spots.  In the rough or waste areas, you will definitely deal with spotty, hard lies.  On the plus side, the worst you’ll have to deal with is long, thin grass, never anything thick or gluey.  Your stance should be agreeable since the ball will likely roll to a fairly flat spot.  Outside of a bad break (or terrible shot), you won’t have the ball dramatically above or below your feet. 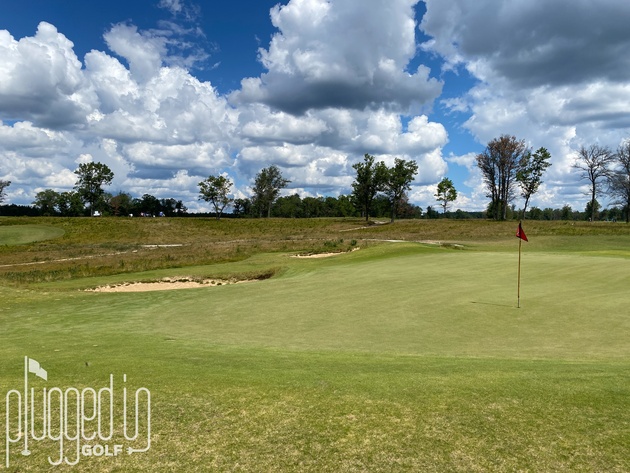 Now, back to the greens.  The starter is going to tell you to land the ball one club short and let it roll to the pin.  This isn’t bad advice, but it’s too general to be good advice.  The greens at The Loop have tremendous variety and can’t be attacked effectively with one strategy.  You need to consider the pin location, wind, the elevation of the green, and the type of shot you want to play before deciding where to land the ball.  Your strategy will also be dictated by the angle at which you’re approaching the green. 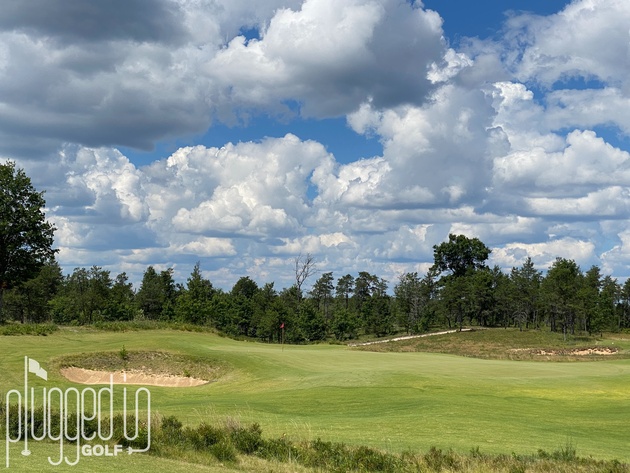 Let me offer a couple examples.  If you’re playing to the green above from the far right, you have a world of options.  Because the green tilts toward you, you can play fairly aggressively if you have a high ball flight.  You can also land the ball as much as two clubs short and let it roll to the pin.  However, there are other greens that have very steep run ups.  If you get a front pin on such a green, landing ten yards short isn’t going to work – the ball won’t run up and might even come back toward you.  In this scenario, you need to hit a towering approach or accept that you’ll have a fairly long first putt.  The bottom line is that you need to think your way around The Loop in addition to executing premium iron shots. 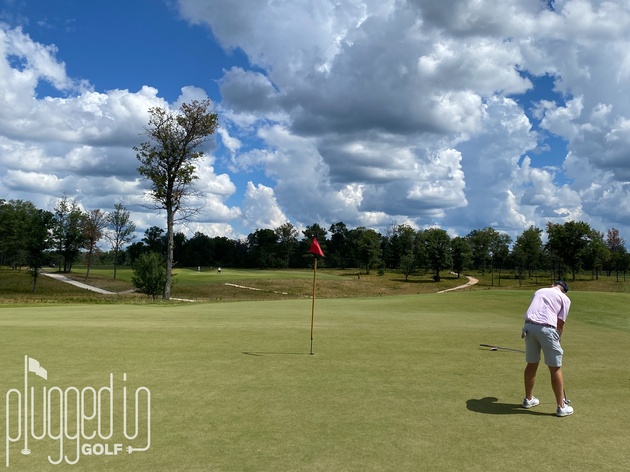 The challenge of The Loop doesn’t stop once you’ve made it onto the putting surface.  These greens are very quick, which enhances the undulations.  You may not think there are rollercoaster putts on these greens, but the combination of speed and shaping can send your ball sideways.  Additionally, these greens are a bit sandy, so they favor bolder putters.  If you try to die the ball into the cup, you may see it fall off its intended line. 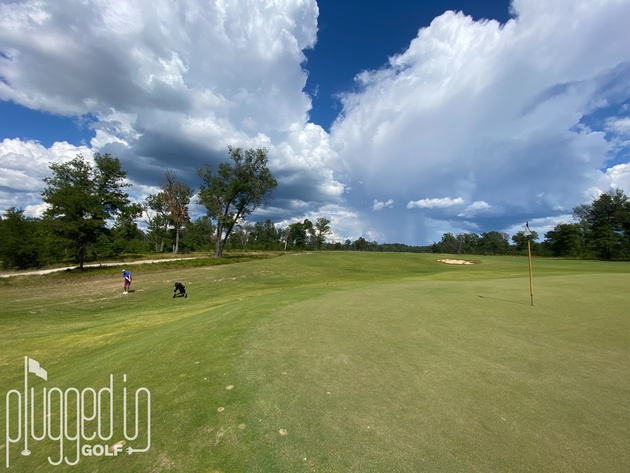 If you miss the green at The Loop – and you will – you may be in for an adventure.  All the surrounds are tight and firm, just like the greens and fairways.  This brings every option into play, from putting to flop shots.  That said, putting from off the green can be a little sketchy if you find a bare or sandy spot. 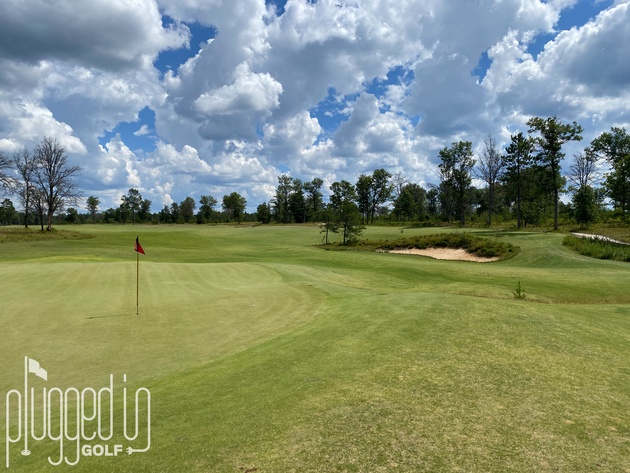 There are plenty of courses with tough greens and surrounds where I advise players to “take their medicine” – get on the green and try to keep it to bogey.  Because of the speed and undulation of the greens, playing defensively is often not an option at The Loop.  This course will push you to be creative, using the slopes and backstops in conjunction with your ball flight.  The rush of visualizing a clever shot and pulling it off makes the risk worthwhile. 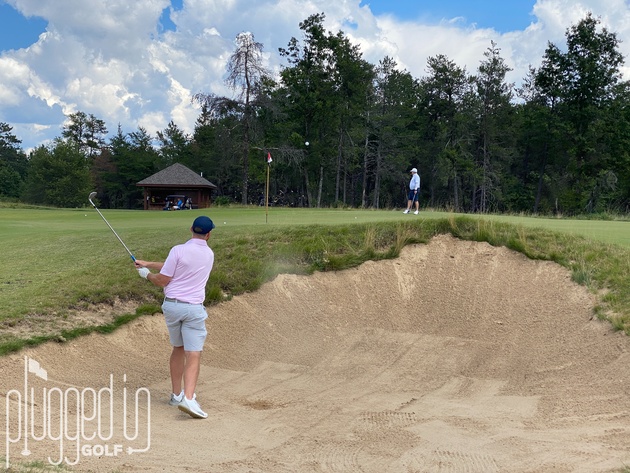 Bunkers don’t feel like a major part of The Loop’s defenses, but they are present.  They tend to come in two flavors – large, waste bunkers and small, deep, mean ones.  Around the green, you’re more likely to encounter the latter type, so try to avoid them. 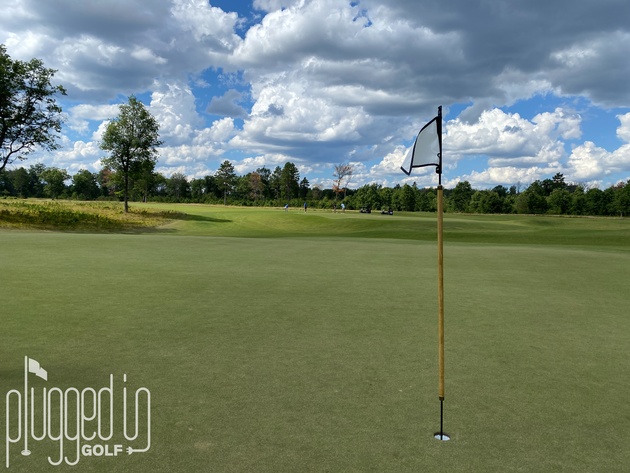 If you’re going to travel to The Loop, you need to play it both ways.  Forest Dunes runs The Loop clockwise (Black) one day and counterclockwise (Red) the next.  Seeing it in both directions lets you appreciate the variety of sizes, shapes, and undulations in these greens.  It also opens up the conversation about which direction is better.

Finally, it needs to be mentioned how much this course is the product of its conditioning.  If it played soft and slow, there would be very little to it.  However, because it plays firm and fast, there’s a conversation to be had about every single approach and short game shot.  You won’t go one hole without an, “Oooohh…YES!” (or “No!”) as the ball skates around the green.  If you haven’t experienced this style of golf, you should make the trip. 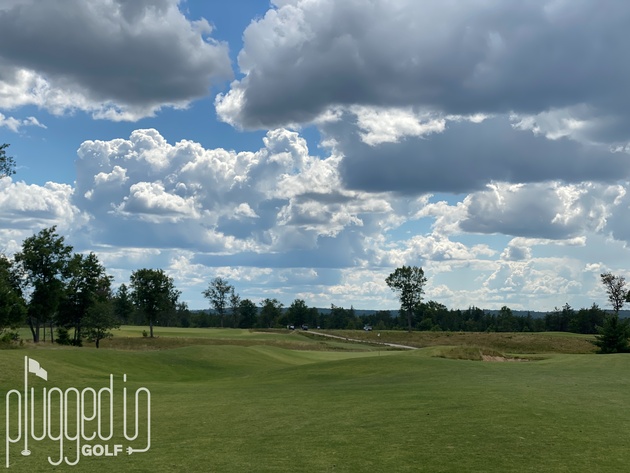 Designer Tom Doak and I agree that this is the best hole of all 36.  It’s fairly short, but you need to be on the left to see the green clearly.  Your approach shot can be funneled between two mounds to a green that slopes away from you.

The shortest par 3 on either course is, appropriately, home to one of the nastiest greens.  Your approach needs to avoid a cadre of bunkers short and long.

Independently, these are fine holes, but together they make for a really fun finish.  Even if you struggled with this “unusual” form of golf, you’ll start to feel better after the 17th helps you produce a massive drive and an eagle opportunity.  On #18, a good drive can get you very near the green for a chance to close birdie-birdie. 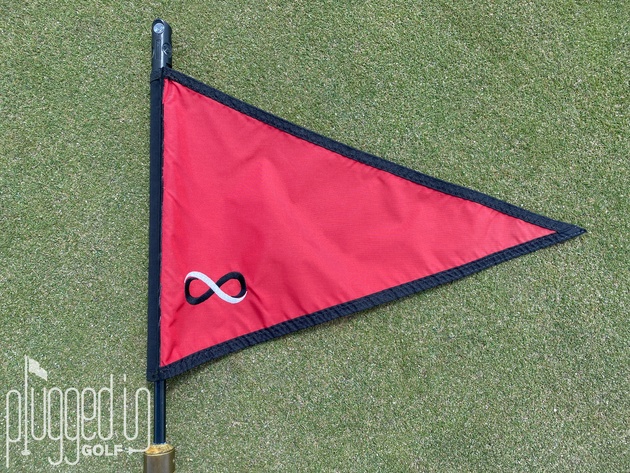 The Loop golf course is a testament to two things.  It displays Tom Doak’s design genius in crafting 18 greens that can be approached from nearly every angle.  Additionally, it shows how firm and fast conditioning can elevate an uninspiring piece of land into a course with endless replay value.  If you want to see how firm, fast, reversible golf courses can be a model of the game’s future, make a plan to head to Forest Dunes.