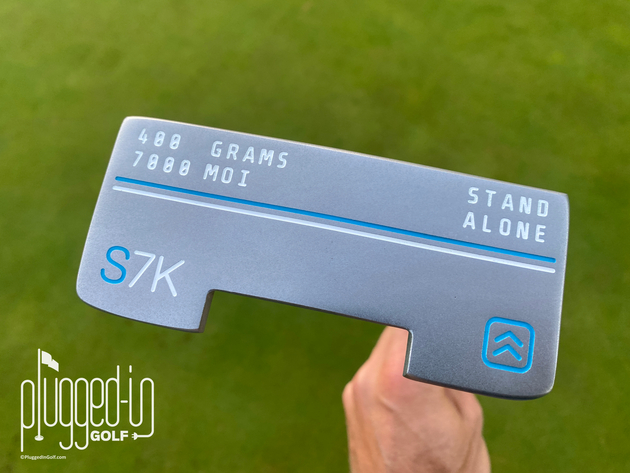 The S7K putter is able to stand on its own so you can check your alignment.  Extremely light shaft and grip. 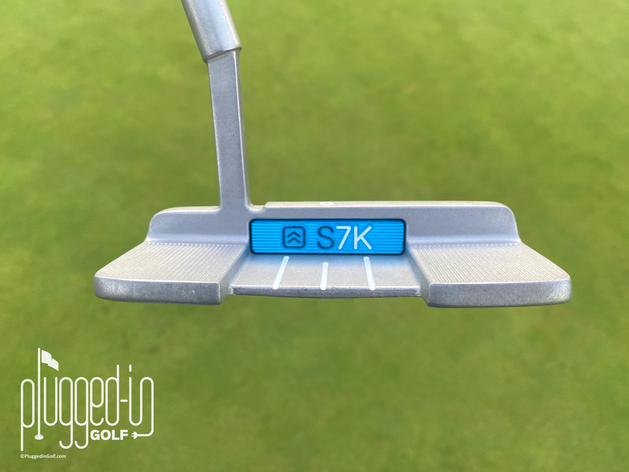 A putter that stands on its own sounds like something you would find in a golf infomercial, but the idea first came to market in the high-end Bloodine putter [review HERE].  Two years later, the S7K putter is offering the same benefits but at a price that’s much more affordable.  I tested one to see if this idea has real merit or if it’s just a gimmick. 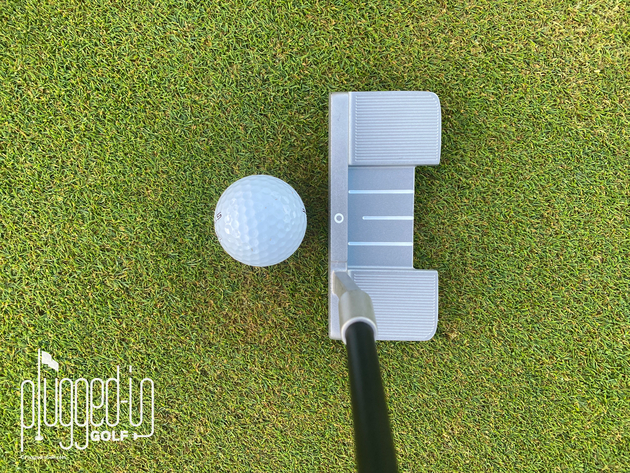 The shape of the S7K putter is something of a cross between a widebody Anser and an Odyssey #7.  The “notches” reach out about half an inch past the flange, which frames the ball nicely.  This putter sports a very thin top line and an anti-glare finish.

At address, you’ll see the “Triple Line Path Guide” and “Strike Dot,” also known as three sight lines and a sight dot.  To me, the dot is overkill – the lines and head shape do plenty to frame the ball – but that’s a matter of opinion.

Overall, this putter looks adequate for its price.  There’s nothing high end about the fit or finish, but for under $200, it’s not bad either. 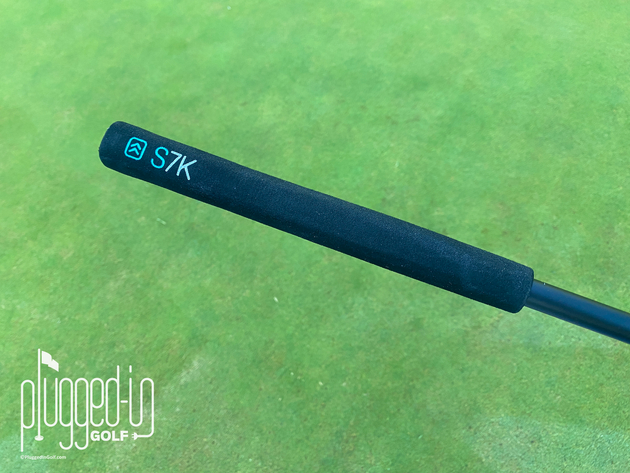 The first thing that I noticed when I picked up the S7K putter is the feel of the grip.  To be blunt, it feels like  a kid’s toy.  In an effort to preserve weight, the grip is made from what feels like Styrofoam, and it took me a little while to get past that.  I’ll also note that there’s no tack or traction on the grip which made it slide around a bit in my hands. 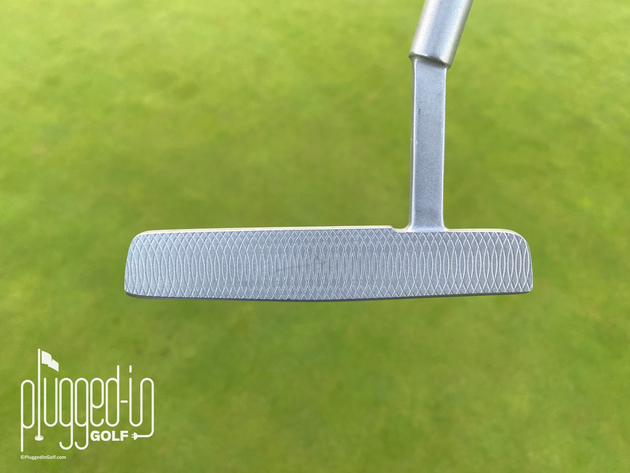 At impact, the S7K produces a very muted sound.  With a urethane-covered ball, the sound wants to be a “tock” but it’s a bit too dull.  Like the look, the feel is neither a positive nor a negative.

You need a substantial mishit to get the S7K to complain.  Anything around the middle of the face feels nearly identical – a credit to the S7K’s stability.  When you get to the edges of the face, the feel becomes more dull. 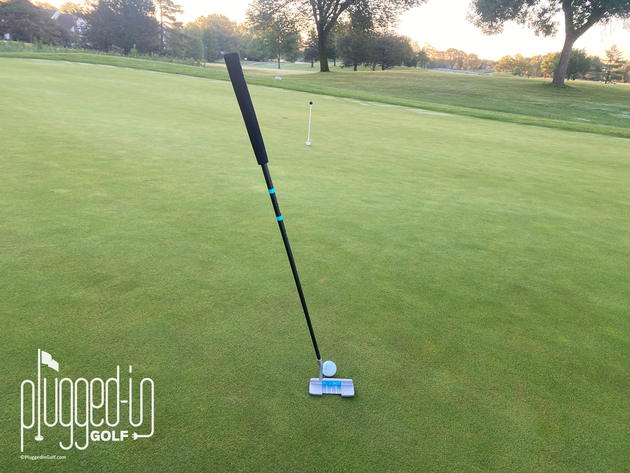 Let’s talk first about the idea of a putter that stands on its own.  The benefits seem obvious: you can aim the putter, step back, check your alignment, adjust if necessary, then hit the putt knowing that you’re aimed well.  This can be good, but there are two important caveats.  First, one needs to consider pace of play.  I frequently say that nothing will make a fast player slow or a slow player fast, but giving this to an already slow golfer seems like a nightmare.  The second and more important caveat is that the correct aim may not look correct from the address position.  You may need time to adjust your concept of what accurate aim is and to trust what you’re seeing.

Another unusual thing about the S7K putter is the weighting.  With a shaft and grip that weigh a combined 50 grams, you will need some time to develop a feel for this flat stick.  The manufacturer calls the low balance point of the S7K “Stroke Balance Construction” and touts benefits similar to the Saks Parente putter [review HERE]. 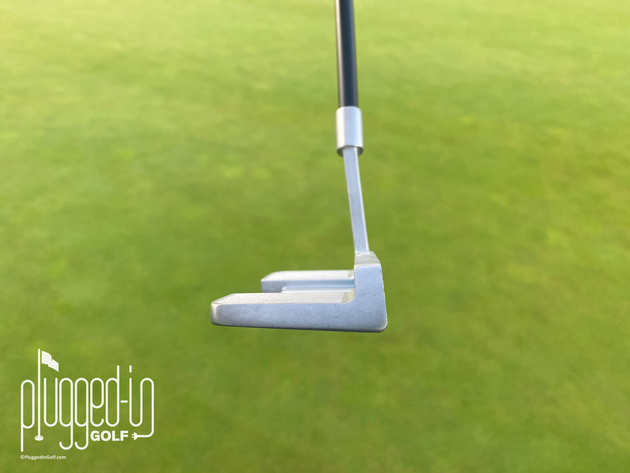 Finally, because little about this putter is normal, the S7K has onset instead of offset.  That means that the putter face is actually in front of the shaft.  When laying the shaft parallel to the ground, the toe hang looks to be near 6 o’clock, but in practice, it felt much more like a typical Anser (4:30 toe hang) to me.

My experience with the S7K was not revelatory nor was it unpleasant.  It swung naturally for me, so I was able to hit my lines accurately.  The forgiveness was quite good, keeping the ball on target on mishits.  Distance control was poor at first, but it did get better with practice.  At no point did I feel automatic with 30+ footers, but I wasn’t nervous over them either.  As someone who generally has good alignment, I did not find myself using the stand alone feature often. 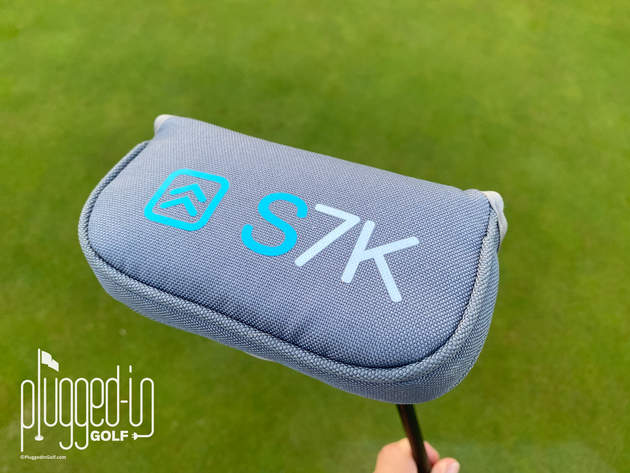 For $179, the S7K putter allows you to experiment with the signature features of two putters that each cost more than twice as much.  While I’m not sold on the “stand alone” feature as a cure-all, I think it has potential to help players who have serious alignment issues.  Be aware that both the alignment and distance control may take some time to get used to.