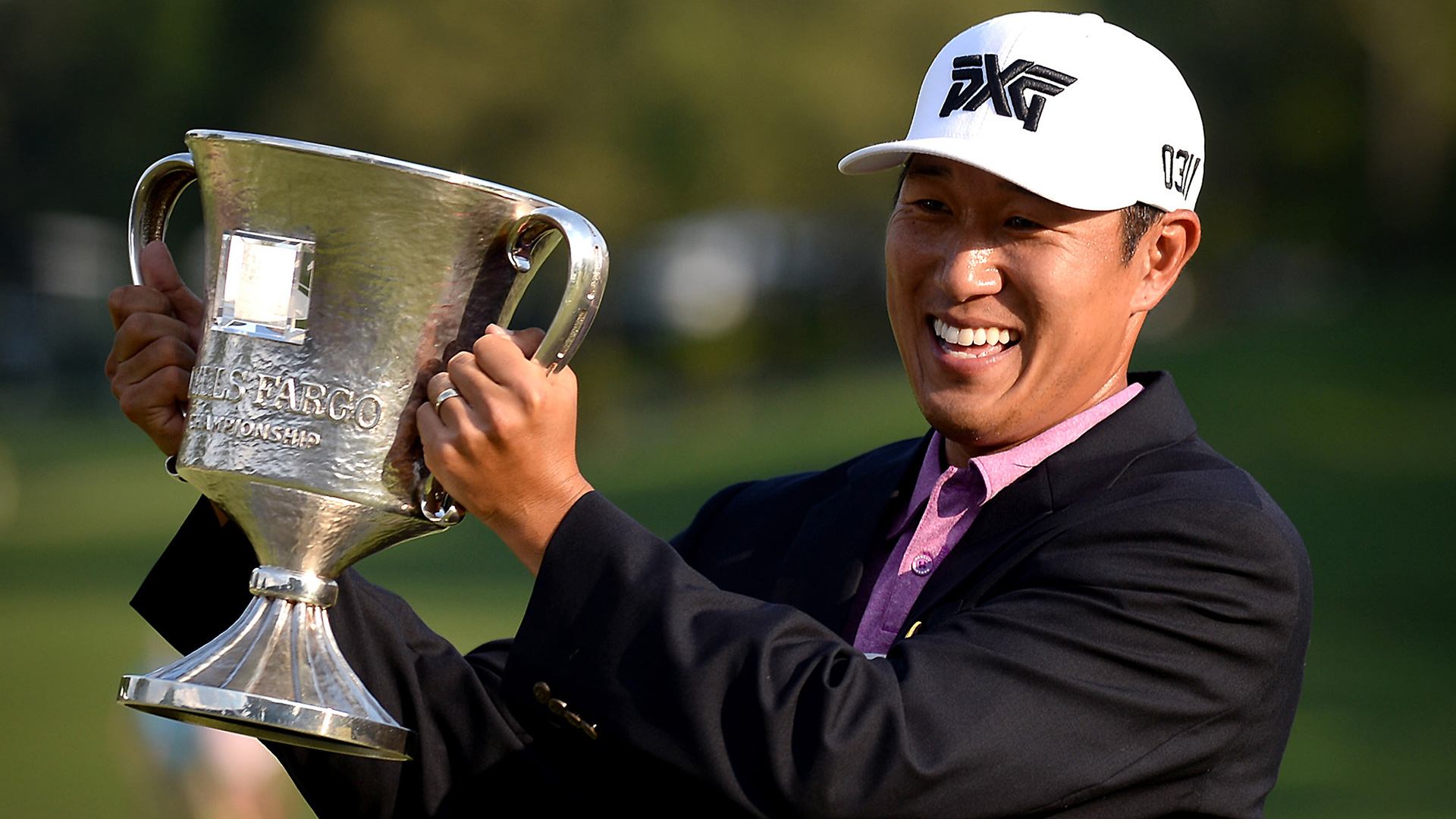 After missing the cut in his last eight starts, James Hahn broke through with a victory at the Wells Fargo Championship this past weekend.  The University of California Berkeley alum carded a final round 70 en route to his playoff victory at Quail Hollow Country Club in Charlotte, North Carolina.  Hahn outlasted a field of big names at the top of the leaderboard, which included Rickie Fowler, who led after 54 holes, Rory McIlroy, Justin Rose, and Phil Mickelson.

Coming into Sunday, Hahn sat in the third position trailing 54 hole leader Rickie Fowler by two strokes, and eventual playoff partner Roberto Castro by one.  Hahn had played consistent golf all week long shooting scores of 70, 71, and 68 for the week, and that consistency continued on Sunday.  He came out firing on the front 9, shooting 3-under par, including two birdies and an eagle, which proved to be the polar opposite of Fowler’s front 9, which consisted of two bogeys and a double.  Hahn’s back 9 proved to be a slow and steady final 9 holes sitting at even par for the back 9 going into the par-4 18th.  After a steady approach shot and a mediocre first putt, Hahn was left with a six footer for par.  He was unable to convert, carding a bogey-5, and leaving the door open for American Roberto Castro, who was playing behind Hahn in the final pairing.  Castro was able to convert his six footer tying Hahn at 9-under par, and off to a playoff we went.

On the first playoff hole at number 18, Hahn found the fairway and Castro’s tee shot landed in the creek that splits the fairway.  After taking a drop, Castro’s approach shot (3) found a greenside spectator’s foot while Hahn’s approach (2) found the green.  Castro was able to get up and down for bogey, but Hahn was able to two-putt his way to par and a victory.

This is Hahn’s second win on Tour, accompanying his 2015 win at the Northern Trust Open at Riviera Country Club.  It is also Hahn’s second top-10 finish this year, but he had missed his previous eight cuts before the Wells Fargo Championship and feared he would be at risk of losing his Tour status.  Have no fear James Hahn, you’re good for at least another two years. 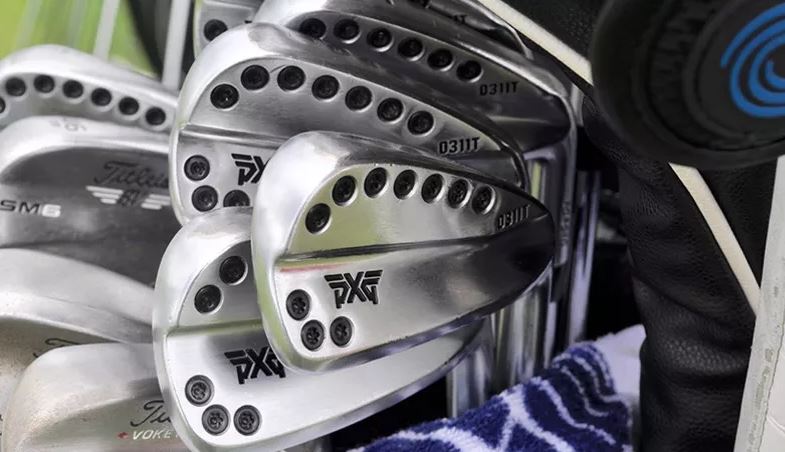 Parson’s Xtreme Golf, aka PXG for short, have been making waves in the golf community as of late for both their interesting design/technology, as well as their incredibly high prices.  Whether or not the technology and performance gains are worth the additional price tag is in the eye of the beholder (clearly I think it is, as I have PXGs in my bag currently).

James Hahn’s win at the Wells Fargo marks the first Tour victory for PXG, which was started back in 2014 by GoDaddy.com founder, Bob Parsons.  Although the company was started back in 2014, the company did not build a reputation or awareness on Tour or in the marketplace until the latter half of last year.  Today, PXG has gained the likes of Major winner Zach Johnson, as well as Tour standouts like Ryan Moore, Billy Horschel, Kristie Kerr, and of course, James Hahn, as a part of their “PXG Troops”.

PXG clubs won’t be available at your local retailer, however, as they are only available via custom order through a local fitter, like your local Club Champion.  Check out our reviews for some of PXG’s latest equipment here, but don’t take our word for it, go try it out for yourself and see if the performance warrants the price tag. 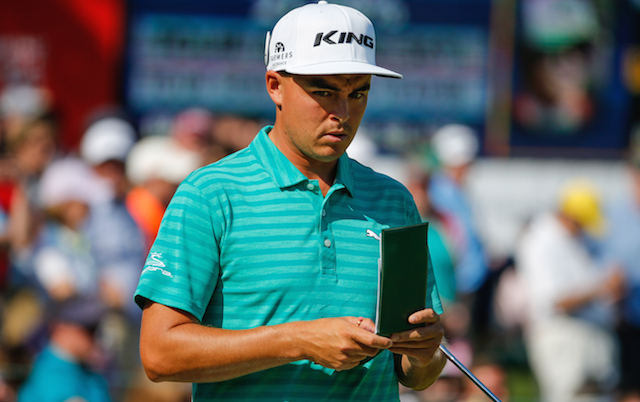 Both Rory McIlroy and Phil Mickelson had strong finishes on Sunday at the Wells Fargo Championship over the weekend.  Rory McIlroy, who got off to a rough start to the week with an opening round 73, explained that this would only be his second round of golf since the Masters in April.  McIlroy, however, was able to rebound and closed the tournament with a 66, good enough for 7-under par and a tie for 4th.  Mickelson also bounced back from his dismal Saturday 76, matching McIlroy with a 66 on Sunday and also finishing T-4 at 7-under par.  Look for both of these guys to be towards the top of the leaderboard at the Players next week in Florida.

Rickie Fowler played a reverse role, as the Puma staffer started the day Sunday with the 54 hole lead at 9-under.  Despite the great play in the first three rounds, Fowler never quite got it going on Sunday finishing with a 73, also tied for 4th with McIlroy and Mickelson at 7-under.

Despite the turnarounds for three of the top players in the World, one other player in the field had the greatest rebound of the weekend: Jason Gore.  The Pepperdine Grad (Go Waves!) shot a miserable 83 on Saturday at Quail Hollow, but that didn’t take the fight out of him.  Gore came back with a Sunday-low of 65, bringing his final score to 2-over par and a tie for 41st.  If you start to string together rounds of 65 in the near future, you may bee looking at another Tour win, Jason.