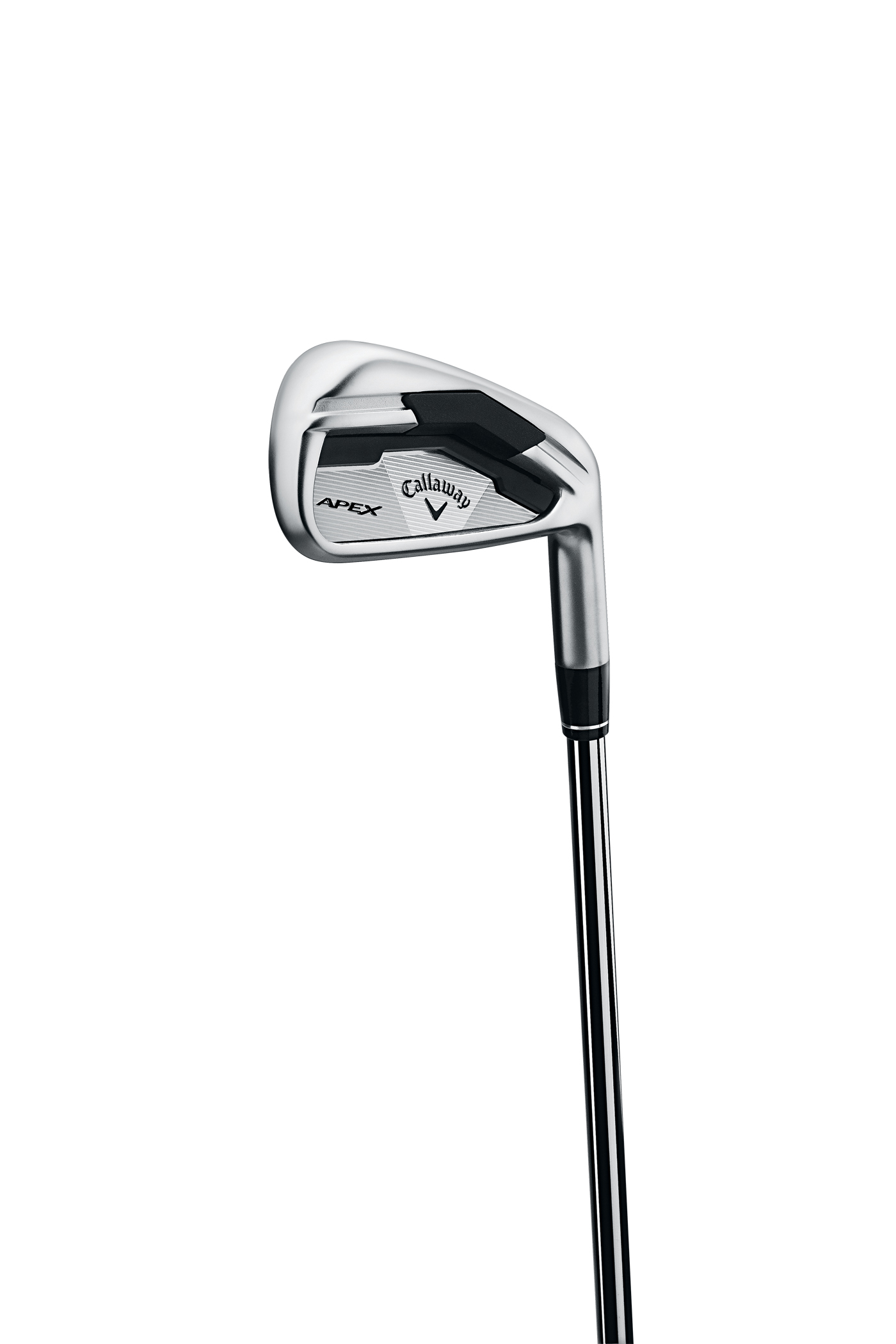 For all of the outstanding PR work that Callaway’s put into their new Apex iron, they didn’t write up a press release…the nerve!  Well, here’s what I understand about the new Apex:

I say “Awesome?” because they won’t be out until December, so we don’t really know.  That said, I’m inclined to give Callaway the benefit of the doubt: just about everything they’ve put out lately has been stellar.

Until then, check out Callaway’s Apex iron page HERE for some videos, more pics, and lots more details about these new irons.

Santa Ana, CA – September 24, 2013 – IOMIC USA, manufacturer of innovative, revolutionary and dynamically designed grips, announced today that IOMIC’s Midsize Putter Grip was used by the winner of the TOUR Championship and the FedExCup.

“The winner has been playing outstanding golf the past few months and has finished third or better five times in his last seven starts on tour. His hard work and dedication have paid off and we congratulate him on winning the TOUR Championship and golf’s biggest prize, the FedExCup,” stated Katz Murai, General Manager, IOMIC USA.

The winner shot a 13-under 267 to become the first European to win the TOUR Championship and the FedExCup. This is his fourth career victory and second victory of 2013 and he is now ranked #4 in the world. He used an IOMIC Midsize Putter Grip.

The IOMIC Putter Grip features an ergonomic design that provides the feel and control necessary to inspire confidence during every putting stroke. It is available in standard, mid-size and large with nine bold colors to choose from.
All IOMIC grips feature the revolutionary “IOMAX” technology, a proprietary compound that provides a soft feel with control. This material provides adhesiveness, is water and friction resistant and is naturally white in color which allows for a full spectrum of color – IOMIC’s signature trait. 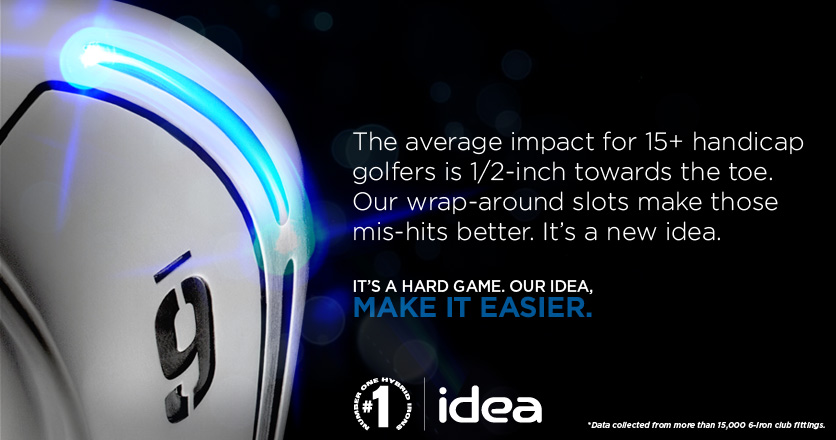 PLANO, TEXAS, September 24, 2013 – Adams Golf has changed how irons perform with revolutionary wraparound slots in its New Idea® Hybrid Irons, generating higher ball speeds and more forgiveness, especially on off-center shots.
Extensive research revealed that golfers with 15-plus handicaps make the majority of contact nearly ½” toward the toe, not on the club’s sweet spot. These new super game improvement irons are specifically designed to enhance the face speed in the area where those players need it most.
“With a concentration on developing technology that golfers really need, we created these industry-first wraparound slots on the toe to compensate for a very common mis-hit,” said Justin Honea, Senior Director of Research and Development. “New Idea irons are definitely our easiest to hit, with measurable improvements in ball speeds and forgiveness where players require it most.”The new slot design creates a spring-like effect across the entire face, expanding the sweet spot. Compared to the industry-leading Idea a12 OS Hybrid Irons, the New Idea Hybrid Irons provide 44% more ball speed on off-center hits and 24% more ball speed on flush shots, because of increased flex from the unsupported faces.New Idea Hybrids
The standard set of the New Idea starts with Adams’ industry-leading hybrids (3-4-5) that feature the company’s Cut-Thru™ sole slots located behind the face, visible on the crown and sole of the clubs. The refined slot design generates increased ball speeds, higher launch and additional distance, most notably on off-center shots, compared to the company’s Idea a12 OS Hybrids.

“These are our easiest to hit hybrids ever, period, as we continue to expand the sweet spot,” said Honea. “Hybrids are our specialty, so we take extra pride in improving ball speed and forgiveness for shots that challenge golfers the most.”

The hybrids also feature Adams’ patented upside-down shape that puts more surface area lower on the face of the club where golfers generally make contact with the ball. This creates a lower center of gravity that helps the ball launch higher, while reducing spin, for better distance results.

Transitional Hybrid Irons
A significant difference between New Idea Hybrid Irons and past models is the new wraparound slot technology. With transitional hybrid irons (6-7) in the set, these clubs bridge the gap between the hybrids and short irons. The 270° slots start from the heel area and cover the sole around the clubhead to the topline – allowing the unsupported face to flex for higher ball speeds and more forgiveness no matter where the ball is struck on the face.

“There’s tremendous emphasis put into transitional hybrid irons, particularly with the addition of the toe slot,” added Honea. “The wraparound slots allow us to seamlessly replicate the hot faces of our industry-leading hybrids.”

Scoring Irons
Completing the set are three scoring irons (8-PW) that help players focus on the target and dial in approach shots close to the pin. These provide the benefits of traditional cavity back irons, with the additional advantage of wraparound slots to keep off-center hits headed toward the green.

Complete Sets For Men and Women
Adams is well-known for its complete set offerings that present the company’s award-winning technology in an easy-to-purchase manner.

The New Idea men’s complete set includes a 460cc titanium driver designed for maximum forgiveness and distance through Adams’ patented aerodynamic shaping; a 3 and 5-wood featuring Cut-Thru slots on the crown and sole to create higher launch without increasing spin for longer carry distances; the New Idea Hybrid Irons with slot technology through the entire set (3-PW); a Yes!® Mallet Putter featuring C-Groove®technology for a better forward roll; and a stylish black and white cart bag with blue trim that includes abundant storage along with matching Idea headcovers.

Colorways for women include: Almond and Blackberry (both available in Standard and Petite sizes) and Raspberry and Melon (both available in Right Hand only). All colors are integrated throughout the entire set from the clubheads to the grip and into the bag and headcovers. The sets include stylish, lightweight cart bags with plenty of large pockets for storage and an easy access putter well.