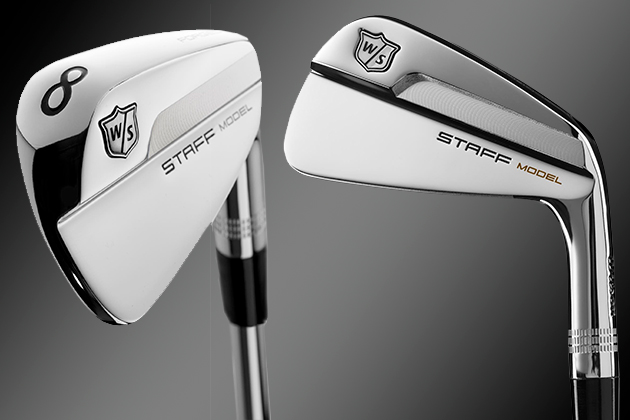 CHICAGO, IL – Wilson has officially announced the modernization of a timeless classic with the release of the all-new Wilson Staff Model irons. The company has a rich history of forged “blade” irons, many of which have been played by game’s greats. The new generation of Staff Model irons are an appropriate continuation of the brand’s most cherished product lines.

The Staff Model irons utilize a shape similar to that of FG Tour 100, while retaining Fluid Feel Hosel construction, which helps to move weight and enhance feel. This new Blade also features a milled diamond pattern which frames the score lines. Additionally, a milled face provides players with improved control and feel. The forged 8620 carbon steel is combined with a high polish mirror finish to give the blades a premium finish. For optimum feel, the irons also feature a bore through fluid feel design.

After racking up two PGA Tour victories with the FG Tour 100 irons, Brendan Steele went back to the drawing board and collaborated with the Wilson LABS team to assist in the development of the new Staff Model irons. Brendan challenged the team at Wilson to create a more modern aesthetic, without sacrificing performance. Steele felt it was crucial to keep the execution consistent and was eager to incorporate his feedback on design, specifically maintaining a thinner top line at address. After two years of development, the new Staff Model blades were finally brought to life.

The performance of the new irons speaks for itself. Gary Woodland was the first to debut the prototype irons and has seen early success. In his first event at the QBE Shootout in the Bahamas, Woodland made a hole-in-one on a 202 yard Par 3. Just three weeks later, at the Sentry Tournament of Champions in Maui, Woodland led the field in Greens in Regulation, with an impressive 87.5% for the week using the Staff Model irons. 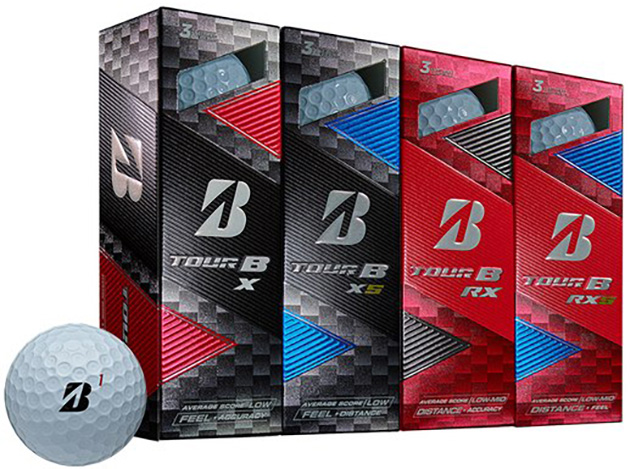 COVINGTON, GA – Bridgestone Golf, the #1 Ball-Fitter in Golf, is announcing exciting changes to its groundbreaking Ball Fitting program that will help golfers determine which golf ball is best suited for their game for tee shots, approach shots and greenside performance.

To date, Bridgestone’s Ball Fitting program has relied on a method of head-to-head driver testing – with a player’s current golf ball selection being pitted against a selection from the Bridgestone line that was derived from a series of driver swing measurements on its Science Eye launch monitors. In 2019, in addition to the trusted driver performance analysis, Bridgestone will begin measuring approach shot performance using an 8-iron as its testing control. Bridgestone will look at spin rates, launch angle, ball speed and other key measurements to help determine changes in accuracy, consistency and distance on approach shots from ball-to-ball. Once a player is fit into a category of ball based on the driver and approach shot testing, Bridgestone will provide that player with 2-ball sample sleeves to conduct their own greenside testing before making a final determination as to which ball they make their “gamer.”

Bridgestone’s Ball Fitting program, which launched in 2006 as “The Bridgestone Challenge,” is credited with being the first consumer-focused system to use science-based launch monitor data to educate golfers on how different golf balls affect their games – encouraging them to choose golf balls based on data metrics rather than the emotional appeal of what Tour players are playing. What Bridgestone found was astonishing. An incredible 7 out of 10 players tested benefitted from being fit for a golf ball, gaining distance and/or accuracy off the tee. Through 2018, Bridgestone has conducted over 300,000 in person fittings and over 2.1 million golfers in total have been aided in their golf ball selection with tools like B-FIT Chat, On-Line Golf Ball Selector and the B-FIT Swing App that allows golfers to conveniently measure their swing characteristics using their smart phone’s camera. In addition to being used as a diagnostic tool, Bridgestone has also relied on Ball Fitting in product R&D with several balls being developed as a result of information gleaned through the program.

In 2019, Bridgestone will return to a greater emphasis on its in-person fittings, relaunching teams of ball-fitting professionals to conduct one-on-one fittings at golf courses, retailers and other special events throughout the golf season. 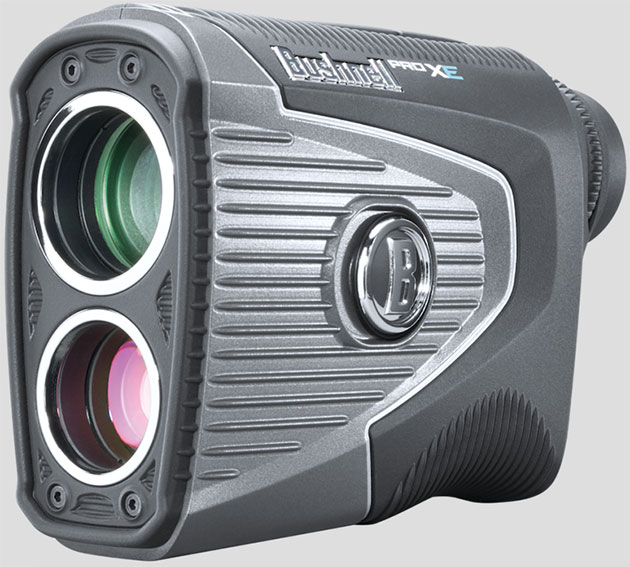 The Longest, Most Accurate, Most Consistent Golf Laser Rangefinder Ever.

OVERLAND PARK, KS – Bushnell Outdoor Products, makers of the #1 laser rangefinder on the PGA Tour, today introduced its latest innovative laser rangefinder – Pro XE. Used by over 99 percent of PGA Tour players, Bushnell continues to evolve advanced technologies. The Pro XE introduces Slope with Elements, a technology that takes Bushnell’s Tour-trusted compensated distances to the next level . Temperature and altitude have now been added to Bushnell’s patented Slope technology to give golfers the most precise compensated distances ever.

The Pro XE will set the industry standard with the development of a new “Slope” Algorithm. The improved “Slope” takes into account the most updated ball flight measures giving a much sharper angle of descent over the previous algorithm. Bushnell provides the only compensated “Play As” distance that takes actual ball flight into account, whereas competitors use simple geometry, which is easy to calculate, but not nearly as accurate. Bushnell prides itself on providing trustworthy and accurate distances to all golfers.

JOLT has been taken to the next level with the all new PinSeeker with Visual JOLT Technology. A red ring now flashes as JOLT vibrates to give the golfer even greater feedback and confidence to know you have locked onto the flag. Also new to the Pro XE will be the introduction of “BITE” technology. The BITE magnetic mount allows the laser rangefinder to be secured to the cart bar without the need for an aftermarket accessory.

The Pro XE also sets the gold standard in ranging performance with the ability to range flags at 500+ yards. 7X magnification enables you to have a better view of what you are ranging, and the newly enhanced ultra-bright backlight display provides crisp, clear data output in the LCD.