True Temper Takes You to School

Each week, PGATOUR.COM’s Equipment Report will highlight the top 5 players in a statistical category, and the club they used to get to the top. We continue with the current leaders (as of August 18, 2013) in birdie average.

When The Barclays returns to Liberty National this week, watch for a markedly different golf course to greet players than that of four years ago.

“In a nutshell, the goal was to try and increase the playability of the course, primarily focusing on the greens’ overall receptiveness to approach shots,” said Steve Wenzloff, the PGA TOUR’S vice president of design services and player liaison. 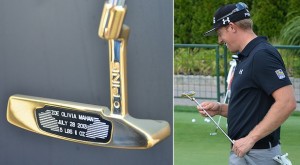 JERSEY CITY, N.J. – Just minutes before the start of the third round of the RBC Canadian Open in Toronto, Hunter Mahan, received a phone call and learned that his wife, Kandi, was going into labor with the couple’s first child. In Dallas.

Mahan made it home in time for the birth of his daughter, Zoe, and had no regrets about his decision to leave a tournament that he might have won.

Ping Golf, maker of all 14 of Mahan’s clubs, traditionally presents the winner of professional events with a gold-plated replica of the putter used to earn the victory. (Solid gold putters are given for wins in majors.) However, to celebrate the Mahans’ joyful arrival, the company decided to give Hunter a gold-plated Scottsdale TR Anser 2 putter on the practice green Tuesday at Liberty National Golf Club, site of this week’s Barclays Championship.

“We’ll never know if Hunter would have held on to win that week,” said John Solheim, Ping’s chairman & CEO, in a statement. “But the circumstances were so unique, we wanted to create a lasting memory for Hunter, Kandi and Zoe that would forever remind them of that special day. The birth of a child is a win any way you look at it, so we thought we’d have some fun with it.”

Another gold-plated Scottsdale TR Anser 2 putter also will permanently reside in Ping’s gold putter vault – along with more than 2,800 Ping putters – inside the company’s Phoenix headquarters.