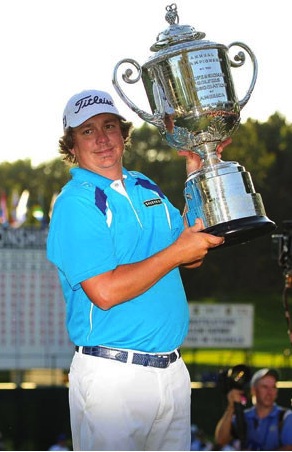 Jason Dufner won his first career major this past Sunday by claiming victory in the 2013 PGA Championship at Oak Hill. Dufner broke the official course record on Friday with a round of 63 and tied the record for lowest round ever shot in a major tournament. The last player to shoot 63 in a major was Steve Stricker two years ago at the PGA Championship at Atlanta Athletic Club. Dufner was the 26th player in history achieve this feat in a major tournament.

(MARLBOROUGH, MA) – CHAMP/MacNeill Engineering Worldwide – The World Leader in Sport Cleat Technology® and maker of innovative CHAMP spikes, high-performance golf tees and accessories – confirms its renowned spikes were used by the winner and six top-10 finishers at the PGA Championship, according to Darrell Survey.

Capturing his first major championship title, the winner trusted the ProStinger™ model’s unique blend of metal and plastic traction technology to achieve a two-stroke victory at Oak Hill Country Club in Rochester, NY. The #1 Brand on Tour®, CHAMP spikes have been used by 32 of the last 44 major winners and are available in a variety of options, including the popular ScorpionSTINGER™ and Zarma®.

“When it comes to equipment, these players are incredibly selective about what they put into play each week,” says Harris MacNeill, President and CEO of CHAMP/MacNeill Engineering Worldwide. “Our spikes are proven to help golfers of all skill levels reach their full potential by providing increased traction, stability and comfort in all weather conditions.”

Beyond the cleat category, the company offers a wide range of products, including the Zarma FLYtee™. Drawing from MacNeill Engineering’s unrivalled 80-plus year heritage, the FLYtee line has quickly become one of the most-used tees by leading professionals worldwide. The new FLYteePRO model is infused with a specially-engineered polymer that makes it nearly indestructible. Like its predecessors, the PRO showcases a six-pronged head and shallow cup to reduce friction at impact, promoting longer and straighter drives.

With more than 100 active distributors, CHAMP is the world’s largest manufacturer of replaceable spikes. The company produces more than 140 million spikes annually and is the dominant global brand in football, soccer, golf, baseball, cricket, rugby and other sports.

“We had several professionals using our grips at the PGA Championship this past week. All of our grips are designed to provide great feel and control which is very beneficial especially during the soggy conditions experienced in the first 2 rounds. We congratulate the third place finisher on his outstanding finish this week and during his previous two tournaments,” said Katz Murai, Overseas Division of IOMIC.

The third place finisher shot a 7-under 273 to claim his third top-3 finish in his last three tournaments. His finish moved him into the top-10 in the FedExCup season standings. He used a blue IOMIC midsize Putter Grip.

The IOMIC Putter Grip features an ergonomic design that provides the feel and control necessary to inspire confidence during every putting stroke. It is available in standard, mid-size and large with nine bold colors to choose from.

All IOMIC grips feature the revolutionary “IOMAX” technology, a proprietary compound that provides a soft feel with control. This material provides adhesiveness, is water and friction resistant and is naturally white in color which allows for a full spectrum of color – IOMIC’s signature trait.

IOMIC USA manufactures premium, ergonomically designed golf grips that focus on technology. The company uses a revolutionary material called “IOMAX”, which enhances grip feel, reduces torque and allows for a variety of color choices. The ergonomic design of IOMIC grips, combined with a super soft touch and feel, ensure maximum feedback and control for golfers. The launch of the Color Grip Series helped the company gain attention in the industry for the wide variety of colors offered. This led to the development of the Art Grip Series, the industry’s first ever marbled grip. IOMIC grips are in the bags of many top professional and amateur golfers worldwide.

For more information about the company please visit www.iomicusa.com.