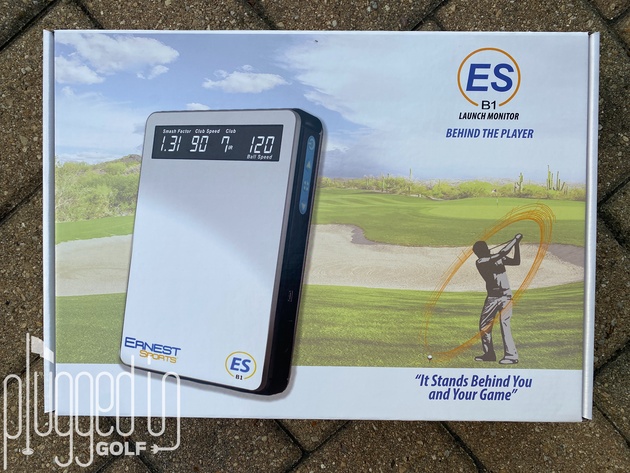 The Ernest Sports ESB1 launch monitor is small, portable, and very easy to use.  Good accuracy with the ability to fine tune distances.  Strong app. 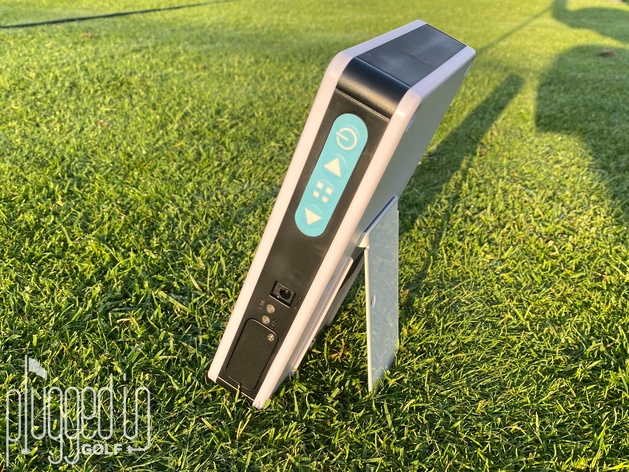 Earlier this year, we examined the Ernest Sports ES14 launch monitor [review HERE].  What was most noteworthy was where it needed to be located – in front of the golf ball.  The new ESB1 positions itself behind the player and ball, where golfers are most comfortable seeing it.  Is it among the elite in affordable launch monitors?  Let’s find out. 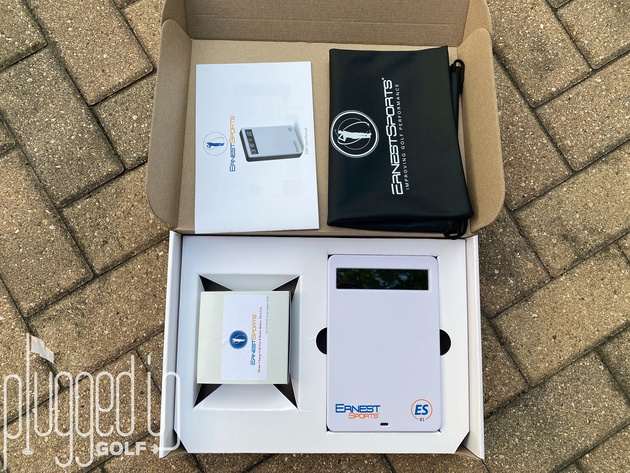 When you unbox the ESB1, you’ll find the launch monitor, power adapter, user manual, and a carrying case.  Once the ESB1 is charged, it’s ready to go.

To use the ESB1, power it on, select the club you’re going to hit, and set it down four to six feet behind the ball.  Selecting the club is done through the up and down buttons on the side of the unit.  Reading the user manual is only necessary for more advanced functions, to be discussed later.  The unit’s display is not huge, but it is readable in most light conditions. 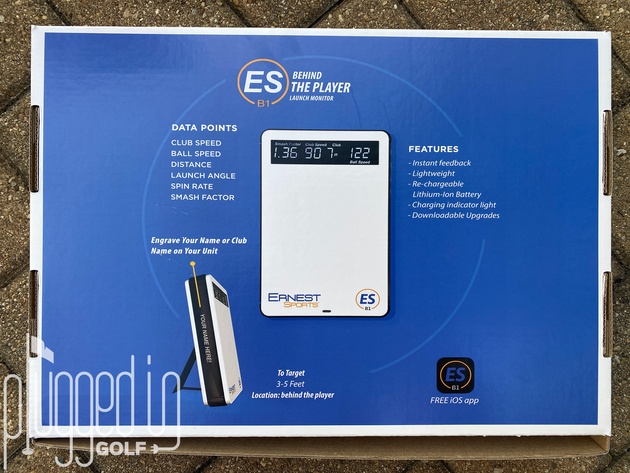 In my testing, both indoors and outdoors, the ESB1 caught all the shots hit within its range.  That said, its range is not huge.  Moving too far forward, back, or to the side will place you outside of the hitting area.  This isn’t an issue when hitting off a mat, but when hitting irons or wedges on grass, you need to be mindful of the unit.

Finally, the ESB1 can pair with the ES Range app (iOS and Android).  The ESB1 connects to your device over Bluetooth which only takes a few seconds.  In my testing, the connection was very stable, and the app worked without issue. 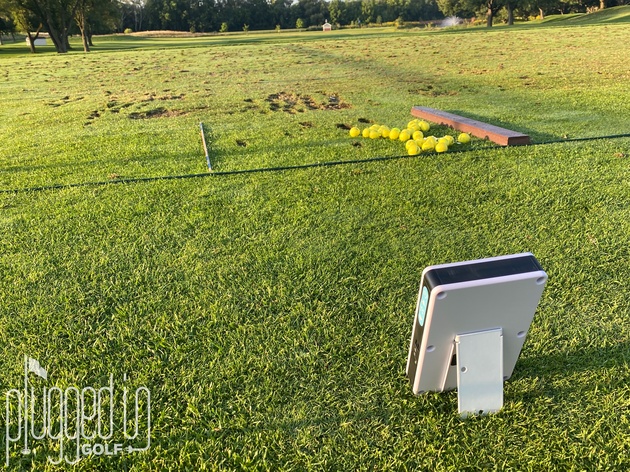 The Ernest Sports ESB1 launch monitor uses doppler radar to measure six data points: club speed, ball speed, distance, smash factor, spin rate, and launch angle.  I tested the ESB1 against my Foresight GCQuad [review HERE] both indoors and outdoors and found the accuracy to be generally good.  Ball speed is often right on, occasionally being a bit too high.  Club speed is good, particular with the shorter clubs, but can read a little low in the longer clubs leading to smash factors that are inflated.  Launch angle and spin were more hit-and-miss, but misreads were usually obvious.

One of the most interesting – and novel – features of the ESB1 is the PAS, Personal Adjustment Setting.  This allows you to tell the ESB1, “You report my 9I as going 3% too far, adjust that down,” and it will remember and report more accurate distance numbers.  Doing this in the app is extremely easy, though it does require knowledge of how far your shots are actually going versus what the ESB1 is reporting.

The ES Range app is a substantial addition to the ESB1.  At its most basic, it displays your stats and can say your distance aloud.  You can also use the app to control the monitor – changing units, clubs, etc.  Additionally, the app will store your data so you can review your previous practice sessions.

Where the ES Range app adds more value is in the games.  The app offers Capture the Flag, Five Shot, and Skills Challenge.  Capture the Flag gives you a target yardage that you capture by getting within three yards.  Five Shot provides an accuracy score for each of five shots hit to a given target.  Finally, Skills Challenge has you hit twenty shots, two each to ten targets, and scores you based on accuracy.  These all add some fun, pressure, and measurables to your practice, which is especially valuable indoors. 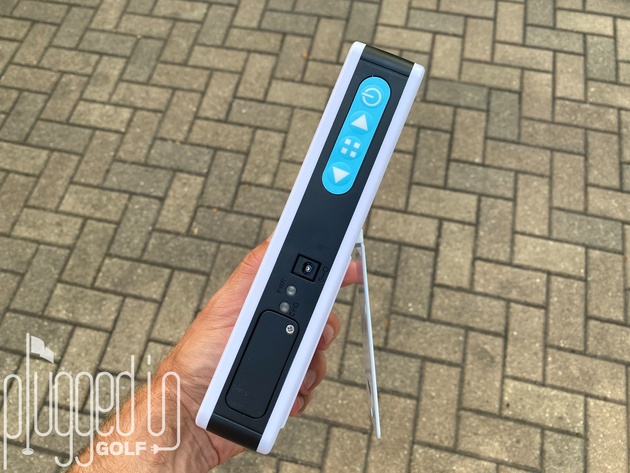 The Ernest Sports ESB1 scores very well for longevity.  It’s light and compact, easily fitting in the side pocket of a golf bag.  Also, it’s ability to be used alone or with an app is a plus.

One of the ESB1’s strongest features is easily overlooked – the battery life.  Ernest Sports states that it can last over 20 hours, and my experience matches that.  This is a major plus for players who want to leave the ESB1 in their bag and not worry about charging it after every use. 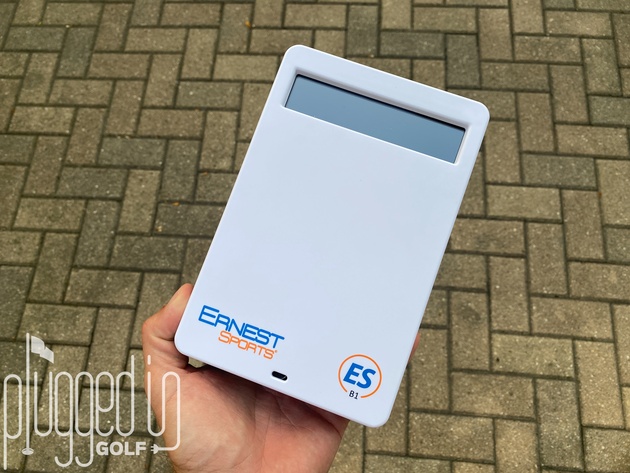 Overall, I would rate the ESB1 as a fair value.  It measures the same things as other launch monitors at this price with roughly equal accuracy.  I do like the ES Range app, and I think that adds substantially to the experience. 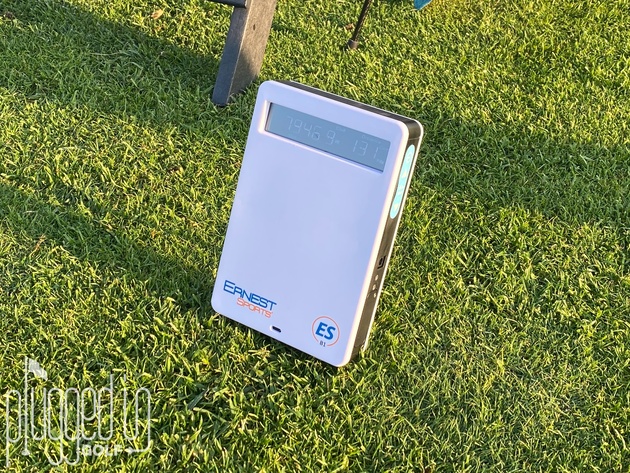 If you want a launch monitor that’s easy to use and has great battery like, the Ernest Sports ESB1 fits the bill.  The app adds great value, especially for indoor users.  Indoor or out, getting additional feedback on your ball striking can add a lot to your practice.