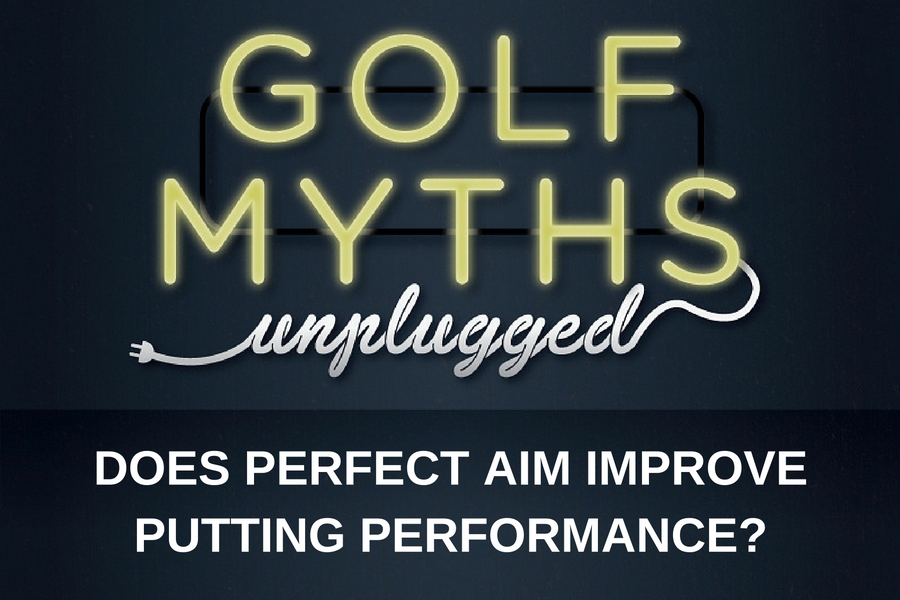 A Game of Inches

The margin for error in putting is tiny.  At ten feet, a club face that’s one degree off will lead to a missed putt.  No wonder so many manufacturers sell putters based on promises of improved alignment.

But we had a question: does better aim and alignment really matter?  Will it actually lead to more made putts?  We put those questions to the test in this edition of Golf Myths Unplugged.

For this test, we used a random assortment of golfers with handicaps ranging from zero to 20+.

We set up seven different trials for this test.  The first was done indoors on a high quality artificial putting green.  Each player hit twenty ten-foot putts – ten without aiming help, ten with a laser illustrating a perfect line to the hole.

The other six tests were done outdoors on a natural putting surface.  We tested straight putts of five and ten feet as well as breaking putts, right-to-left and left-to-right, of five and ten feet.  Just like the indoor test, each player hit ten putts on their own and ten putts with perfect aim.

Half the testers hit their perfectly aimed putts first, half hit their normal putts first.  “Perfect aim” for breaking putts was set with the idea that a miss should roll 18″ past the cup – an oft-referenced “perfect speed.” 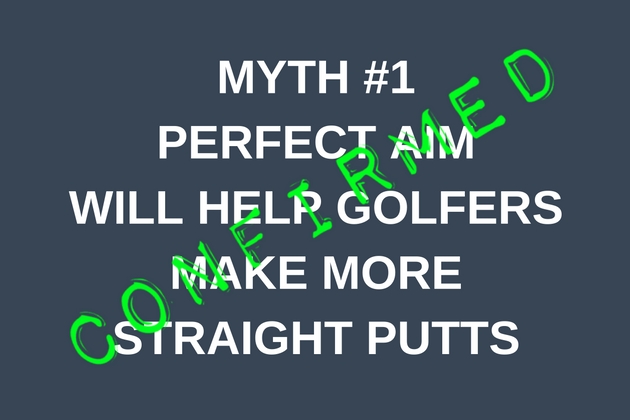 On a straight putt, the results matched our expectation: perfect aim led to more made putts.  This held true indoors, outdoors, and at varying distances.

In observing the testing, the benefit of perfect aim was obvious – consistency.  When provided with perfect aim, our testers set up almost exactly the same way every time.  Left to their own devices, the range of alignments was wider.  If a golfer, especially a higher handicap player, pulled a putt, they often aimed the next one to the right.  This didn’t happen when they were given perfect aim. 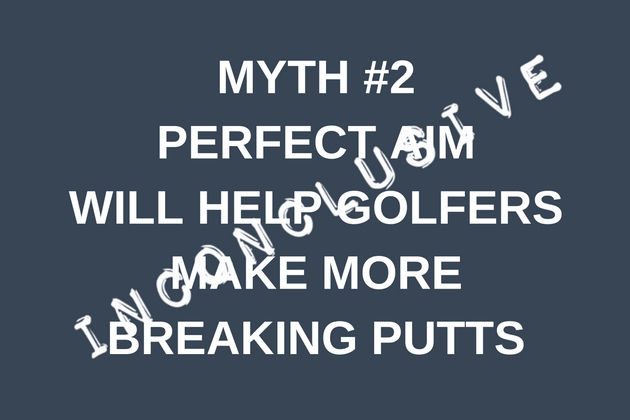 On breaking putts, we found that perfect aim did not always lead to more made putts.  With higher handicap players, perfect aim did generally improve performance, but that trend was not seen with better players.

It is easy to understand why higher handicap players benefit from perfect aim: they aim all over creation on breaking putts.  On a putt with about six inches of break, one player aimed anywhere from inside the cup to over a foot outside.  They were also deeply affected by the previous putt.  If they missed a putt long and on the high side, the next putt would assuredly be short and low.

It was initially unclear why better players did not benefit from perfect aim, but we were able to generate a hypothesis.  Better players have superior speed control but are set in their speed preference.  If a good player likes to see the ball barely make it to the cup, our “perfect aim” seemed too low.  Conversely, if they liked to ram the ball into the cup, “perfect aim” seemed too high.  While they were able to adjust to our line, their overall results were not as good as when they putted naturally.

The biggest takeaway from this test is that making putts is reliant on three equally important elements: read, aim, and speed.  Controlling for a “perfect” read and aim does nothing for the golfer if it isn’t matched with their preferred speed (or if they have no control of speed).

This is not to say that consistent aim isn’t important.  We are strong advocates of fitting for every club in the bag, including the putter.  A good putter fitting, such as with Edel or Club Champion, will include fitting for aim.

Once you have a putter that you can aim, make sure that your putting practice gives equal attention to read, aim, and speed.  Missing any one of those elements makes holing putts very unlikely. 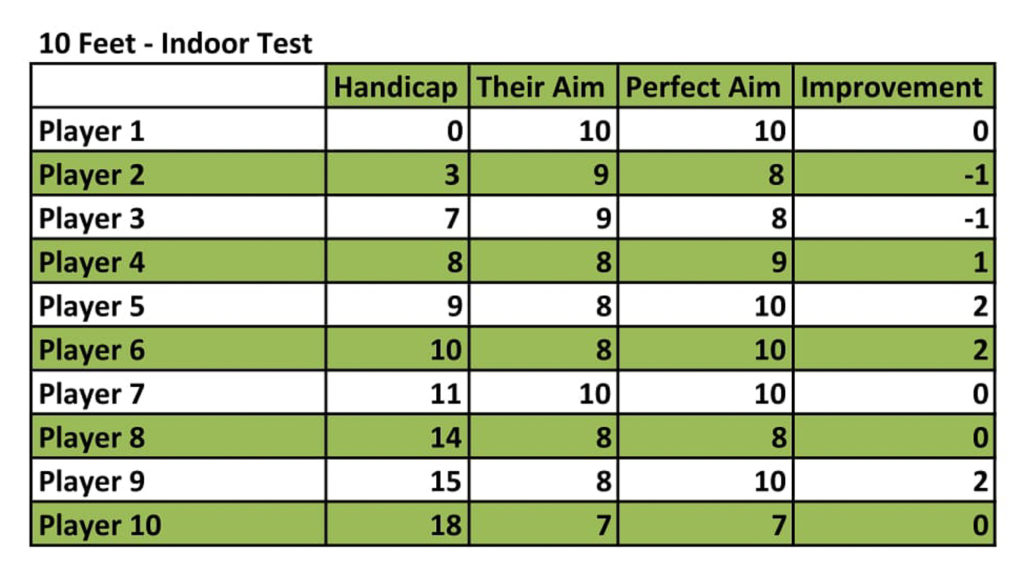 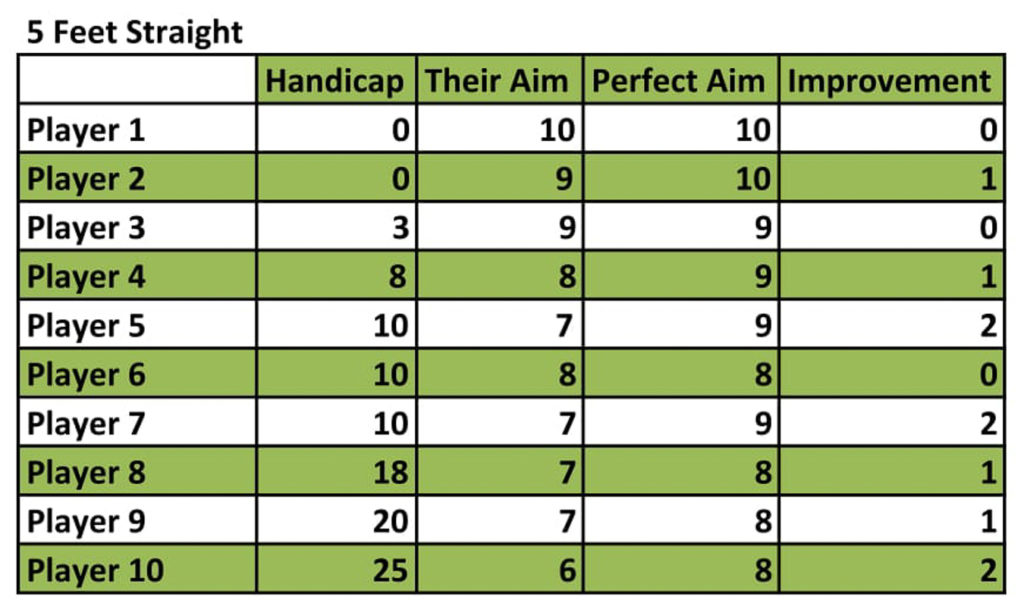 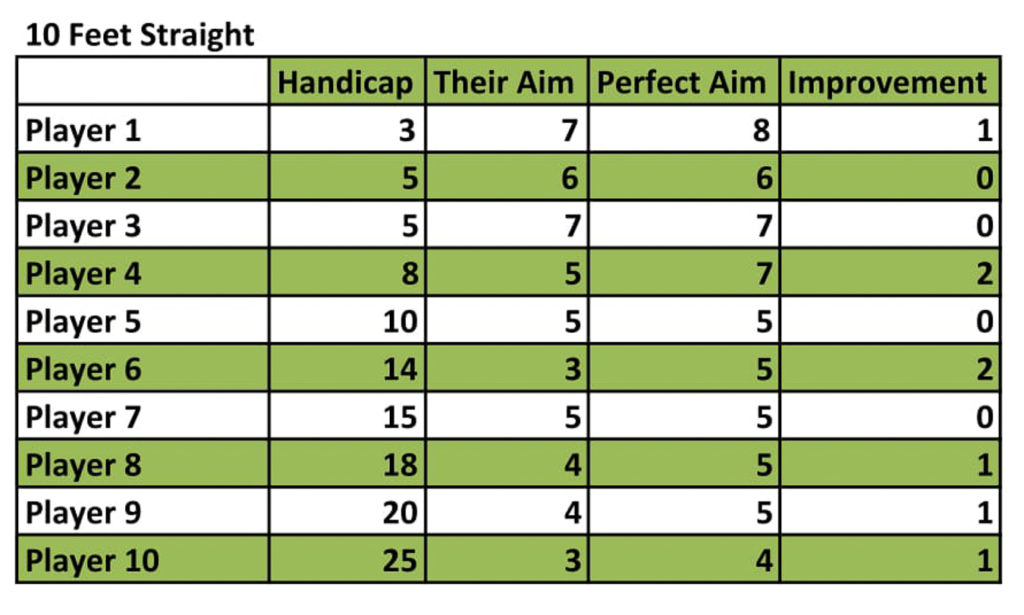 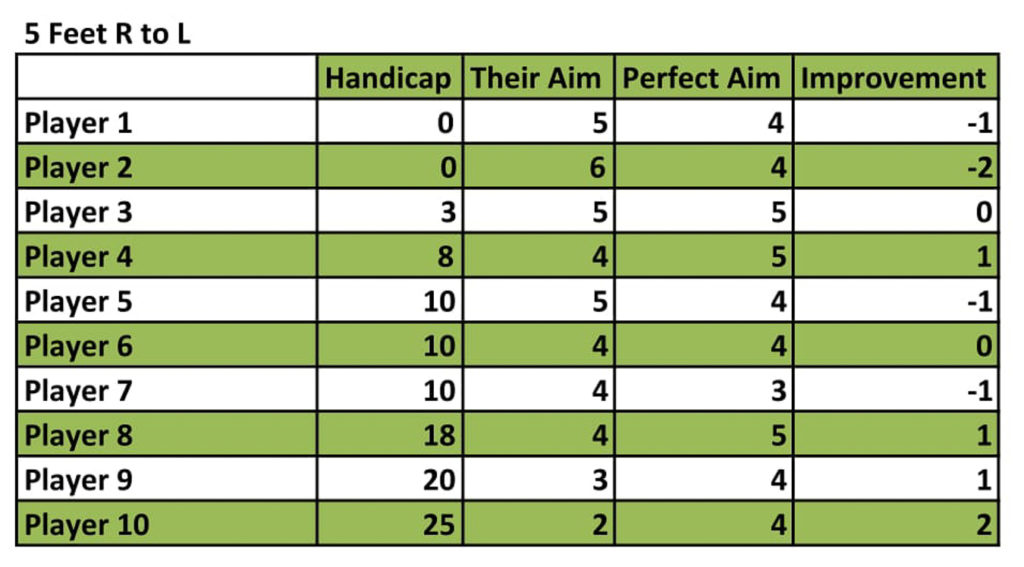 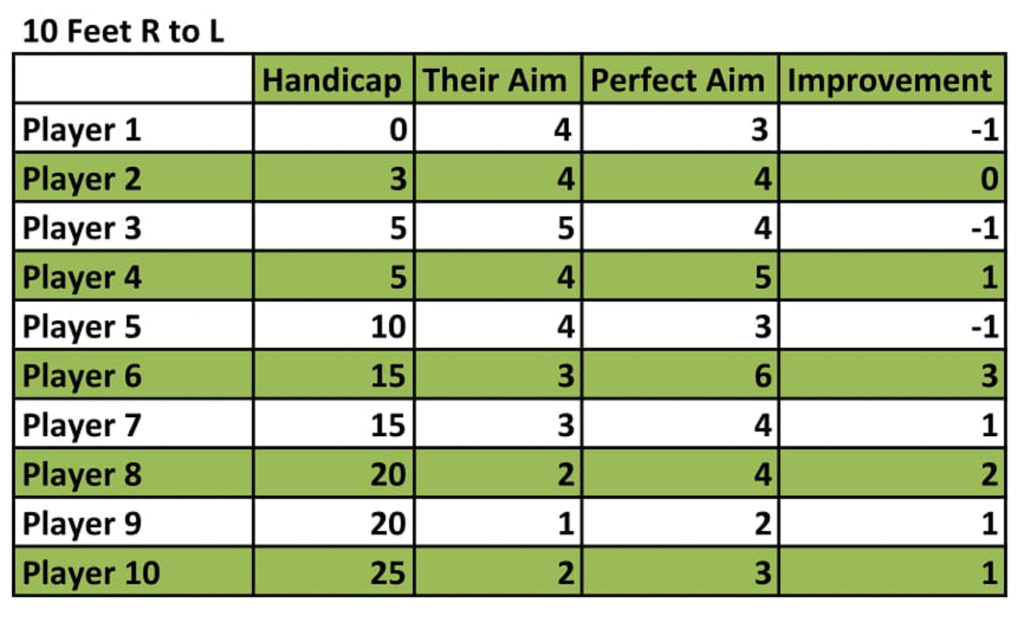 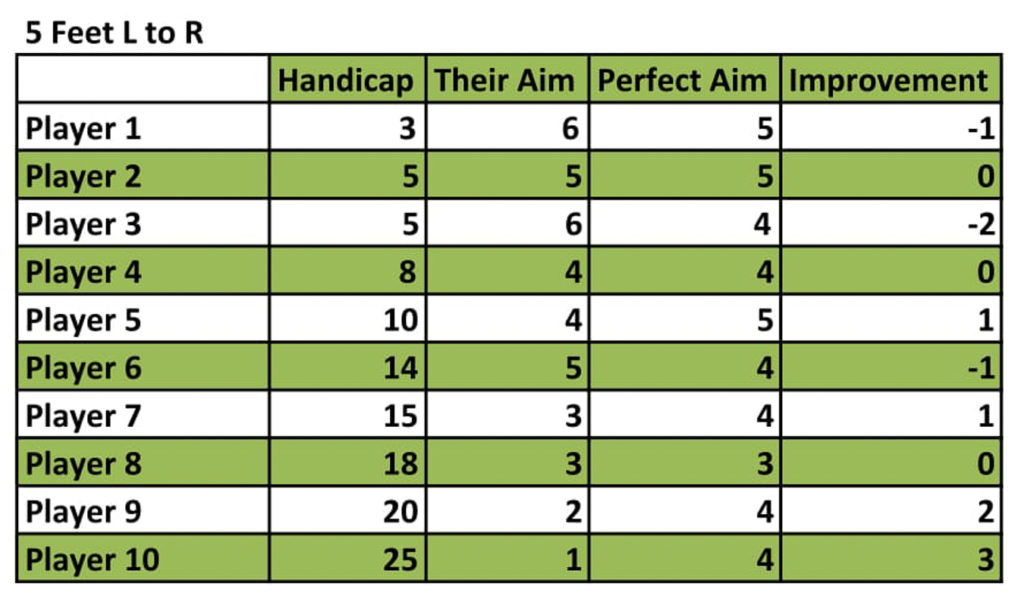 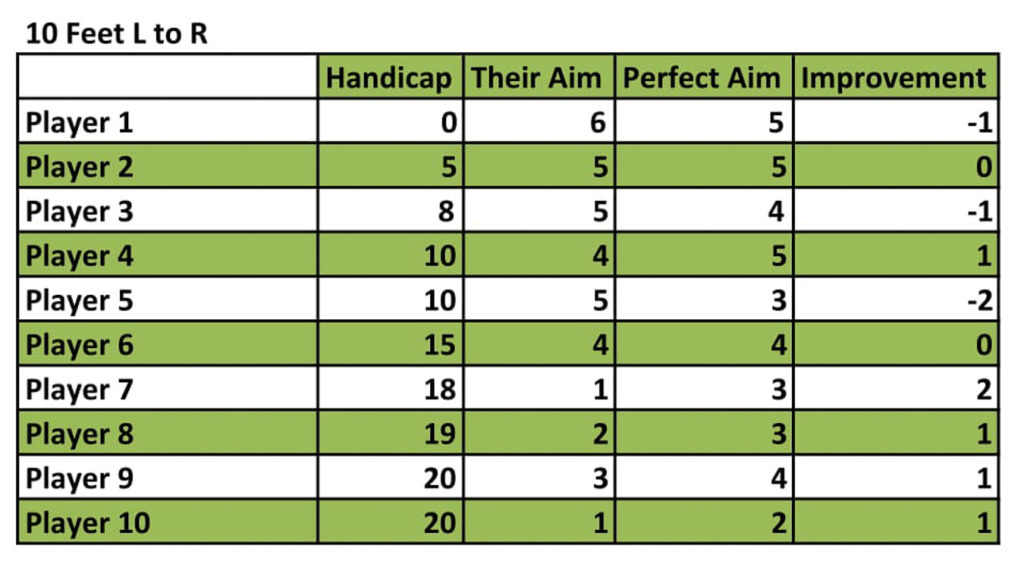