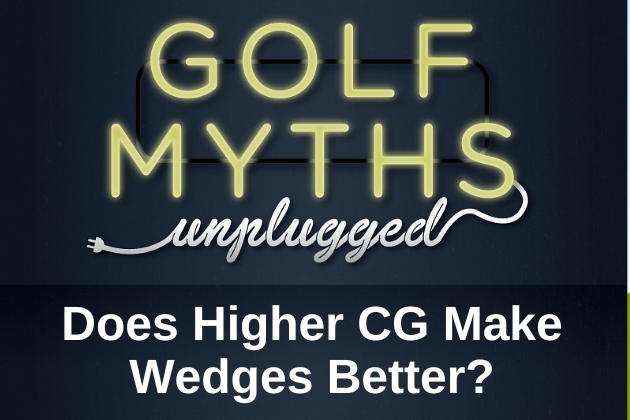 A Sea Change or Just a Fad?

If you’ve been following wedges closely for the last few years, you’ve noticed a trend toward higher CG (center of gravity).  If you understand gear effect [learn about it HERE], the reasons for this change are obvious.  Higher CG promotes lower launch and higher spin, meaning wedge shots that look like those of Tour players.  But does it actually work in practice?  Will we see a reversion to low CGs in a couple years?  We did the testing to find out. 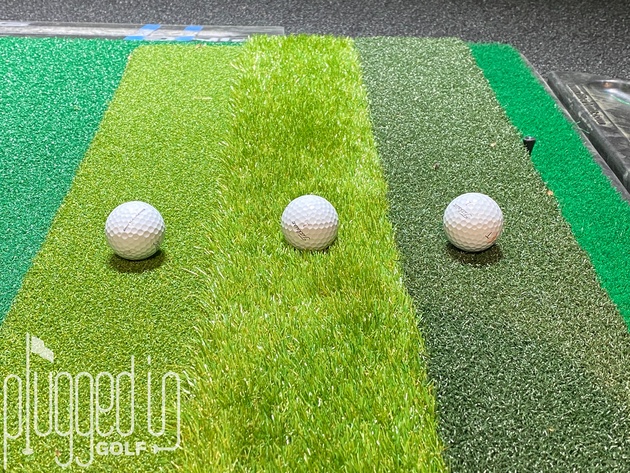 We recruited six testers with handicaps ranging from +2 to 15.  Each tester hit a total of 45 shots – 15 with each wedge, 5 from each lie on the Wittek Tri-Lie Mat [review HERE].  The order of wedges and lies was changed for each tester. 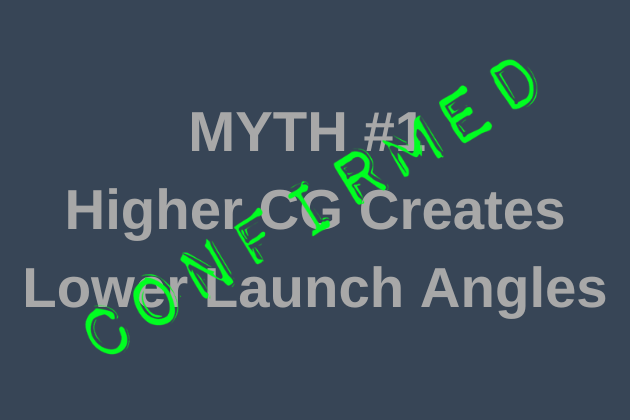 We start with the one unequivocal result in our testing.  Every tester from every lie launched the Edison (highest CG) wedge the lowest.  Additionally, in all but two cases, the lowest CG wedge launched the highest.

The gap between the lowest and highest launching wedges ranged from 1.7 degrees to over 4 degrees, depending on the lie.  From a tight fairway lie, we saw the smallest gap – 1.7 degrees on average.  However, the rough lies with the ball sitting up or nestled down produced differences of 4.1 and 3.3 degrees, respectively.  This indicates an even stronger advantage for the high CG wedge when you’re in trouble.

The takeaway here is simple: if you want to flight lower wedge shots, higher CG is your friend. 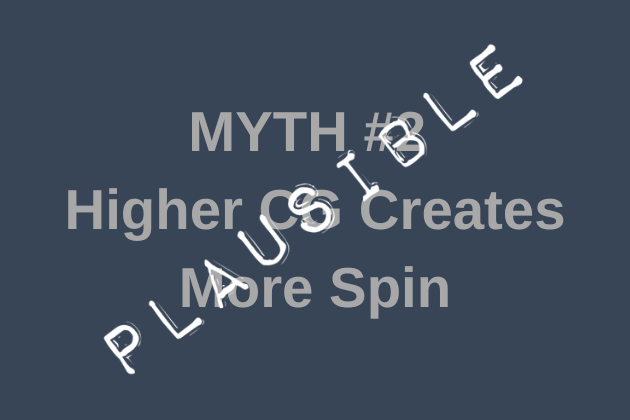 Turning to spin, we get a slightly murkier picture.  In five of the eighteen test conditions (six testers, three lies each), the highest CG wedge produced the most spin.  In ten it was in the middle, and in three conditions it was the lowest spinning.

Seeing more muddled results in spin makes sense because spin can be compromised by strike quality and interference between the ball and club face.  It’s also important to note that, in many cases, the gaps between the clubs were quite small.  For one tester, the gap between all three clubs was only 400 RPM out of a total of over 11,000 RPM. 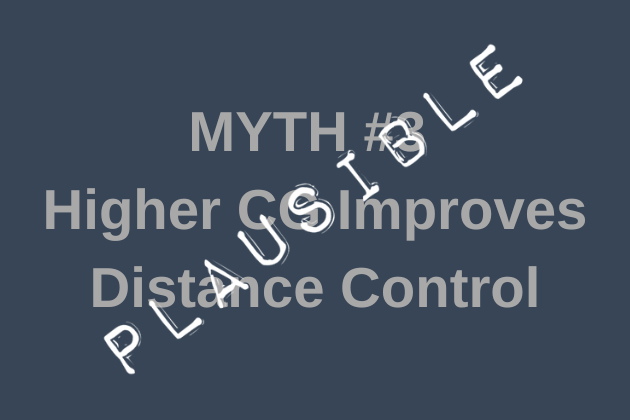 Our distance control conclusion mirrors the previous one.  Out of eighteen test conditions, the highest CG wedge produced the tightest distance dispersion (gap between the longest and shortest shots) seven times.  In four tests it was the worst, in seven it was in the middle.  Again, the differences between best and worst varied.  Sometimes a couple yards separated top from bottom, other times the gap was much larger.

For this myth, there are a few other things to consider beyond the yardages.  First is ball speed.  The Edison wedge produced the highest ball speed and smash factor for every tester.  Our two lowest handicap testers picked up on this immediately and mentioned that it was different than what they were used to.

Another thing to consider is how the ball will fly outside.  It’s possible that the lower launch of a high CG wedge could improve performance in the wind, resulting in better distance control.  Our testing was done indoors, so this is only a hypothesis. 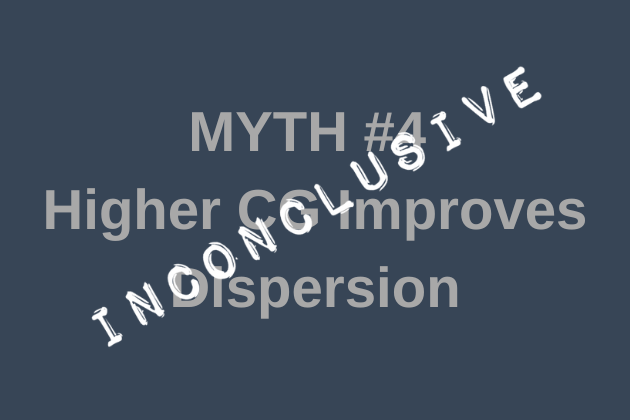 Our dispersion results were more polar than the previous two myths, leading us to deem this inconclusive.  One tester, who games a low CG wedge, could not control the high CG wedge whatsoever.  We had another tester, one of our low handicap players, who threw darts with the high CG wedge.  The other four showed very modest differences between the three wedges.  Three testers had best-to-worst gaps of only two yards.

The only additional note to add here is the same as was mentioned above.  It’s possible that a lower launching wedge shot could perform better in the wind, leading to tighter dispersion.  Again, this is only a hypothesis. 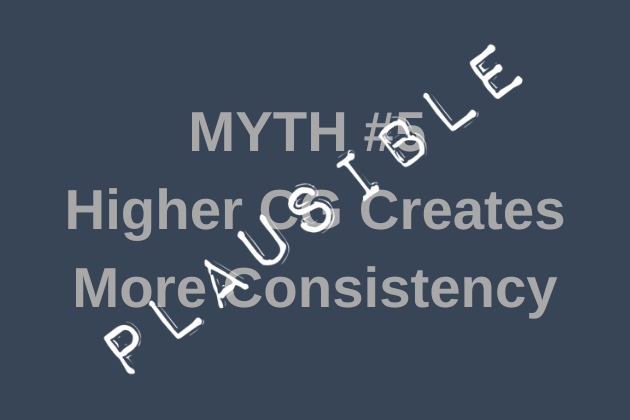 For this final myth, we looked at every part of the wedges’ performance – ball speed, spin, launch angle, and yardage.  While the high CG was not better in every single instance, its performance was strong enough that we rate this “plausible plus.”

The area where we saw the biggest consistency win for the high CG wedge was launch angle.  Especially from the rough, the high CG wedge produced a much more consistent launch angle.  In the most extreme example, a tester hit four consecutive shots within 0.2 degrees of each other, then saw a nearly 7 degree gap between shots with the low CG wedge.

We found similar results – though not as stark – with spin.  The high CG wedge produced tighter ranges of spin more often than not.  As we’ve mentioned, sometimes these differences were not that big – a few hundred RPM – but in a couple instances the high CG wedge produced spin ranges that were 2000 RPM tighter than the others.  The story was the same with ball speed.

It’s my opinion that this test underrepresents the potential performance benefits of a higher CG wedge.  Of our six testers, four game the wedge we used as our low CG wedge.  One tester, after hitting a high CG wedge, stated that the low CG wedge “feels like home.”  These kind of preferences are unavoidable in human testing, but they should be considered when evaluating the data.

While OEMs will continue to offer a range of options, I expect the march toward higher CG in wedges to continue.  Especially in the lower lofted wedges, higher ball speed and lower launch are too valuable in bridging the gap to modern iron sets.  If you’re gaming older wedges that aren’t producing the ball flight and consistency you want, it’s time to get fit and explore the benefits of higher CG.