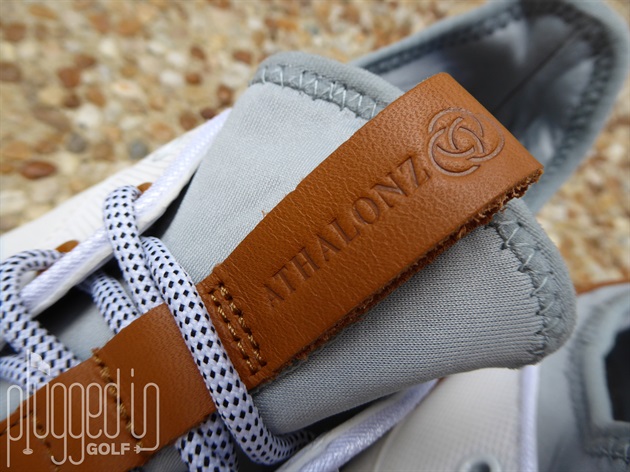 The Athalonz EnVe golf shoe is designed to improve stability by tilting your feet toward your midline.  Fairly heavy.  Can help with rotation and balance. 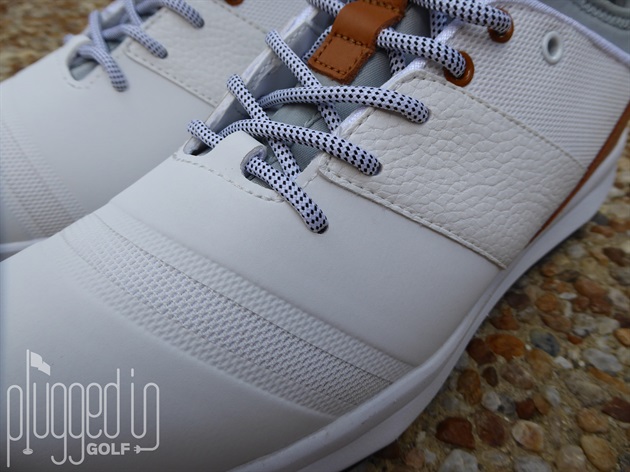 As I’ve written numerous times, my favorite products to review are ones that make bold claims.  “Golf wear that immediately improves performance” certainly qualifies.  Athalonz states that their patented EnVe technology puts golfers into a more stable, powerful position automatically.  Matt Meeker and I tested them to see if it’s true. 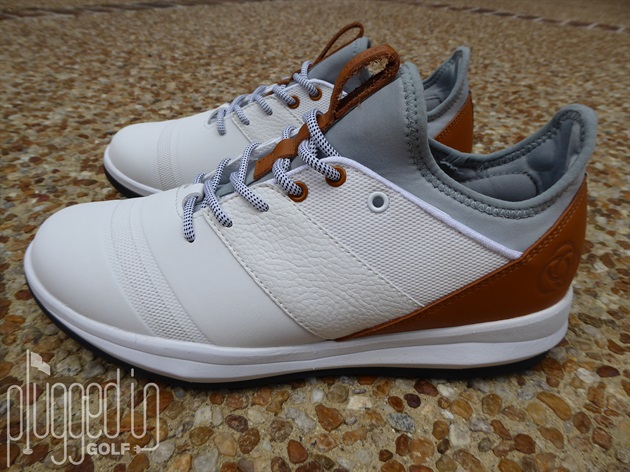 Matt Meeker and I don’t disagree often, but we do not see eye to eye on the aesthetic appeal of Athalonz EnVe.  Meeker reported that the EnVe has “great looks,” noting the multiple finishes and materials.  He also felt that the leather accents give it a high end appeal. 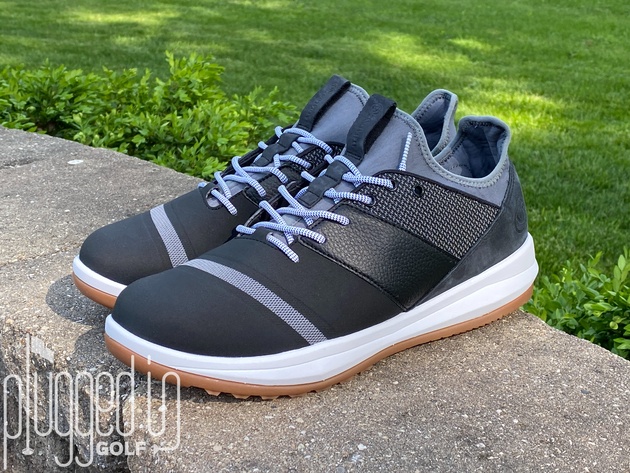 To me, the look of the EnVe is overcooked.  There are a lot of materials, but they don’t flow together harmoniously to me.  The stripe across the toe stands out much more on the black version, and I found it a bit jarring.

Ultimately, style is in the eye of the beholder.  If you like the look, that’s all that matters.  And if they offer a noticeable performance benefit, maybe it doesn’t matter what they look like. 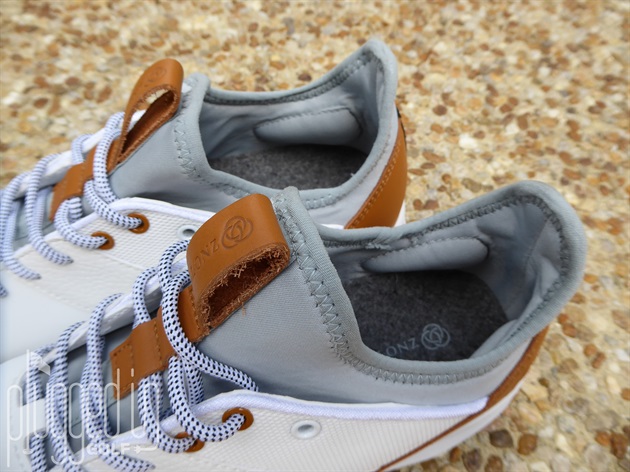 Athalonz notes that their shoes run half a size small, which Meeker and I both took into account in making our selections.  We felt this advice was right on.  Meeker noted that “the fit is great.”  I tested the EnVe in a 14, my normal size for brands that run a little smaller, and found the fit to be good.  If I’m being picky, a 13.5 would have been even better, but that’s not an option, and I’m fine with the fit of the 14.  Athalonz offers a free exchange to make sure you get the right size.

Getting my foot into the EnVe was a little tough.  These shoes feature a sock-like liner, and a heel loop would have been a nice addition to pull them on.  This isn’t a deal breaker but something to hope for in the next iteration. 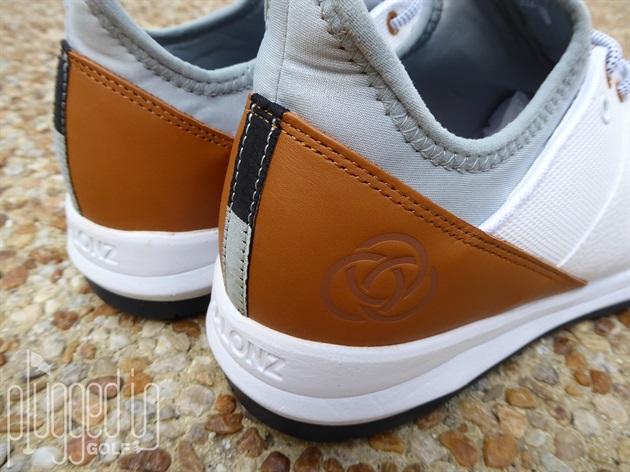 Once they were on my feet, I found the Athalonz EnVe quite comfortable.  The entire shoe, and the toe box in particular, feels roomy.  If you hate having a shoe impinge on your feet, you’ll love these.  Underfoot the feel is firm.  It’s not hard or uncomfortable, but this shoe isn’t loaded with cushioning like some shoes are.

Finally, Athalonz states that the EnVe has “lightweight performance,” which I can’t quite agree with.  My size 14s weighed well over a pound which puts this shoe in the average to heavy range.  They don’t feel particularly heavy, and I had no issue walking in them, but the scale doesn’t lie.  If you need light weight, these won’t be a fit. 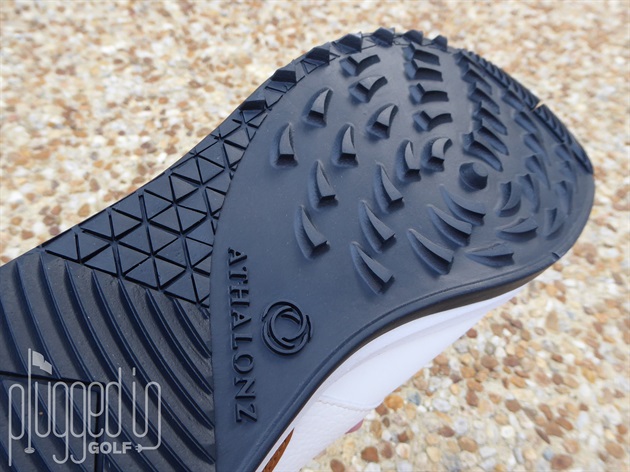 The key to Athalonz’s claims of improved performance is their patented midsole.  There are more details on their website (link below), but, in short, your feet are tilted slightly toward your midline to “keep your weight centered to reduce sway and enhance stability.”  Because both your feet tilt “in” these shoes work equally well for right and left handed players.  Also, for the competitive players, they are approved for USGA sanctioned events.

Matt Meeker and I both felt that the tilt of the shoe was immediately noticeable.  Meeker noted that he felt better able to rotate his body, but that he did not have to think about the shoes during his swing.  I felt very stable at address, though the heel is taller than my normal shoes.  In all the swings that I took, I never got “outside” my right foot or “stuck back.”  That said, I felt I needed to put a little extra effort into getting to my left side.

Ultimately, I think the Athalonz EnVe could be a worthwhile experiment for players who struggle with stability.  Some may look at this as a band-aid, but, just like any piece of equipment, each shoe is designed to work for certain individuals.  It’s all about finding your fit. 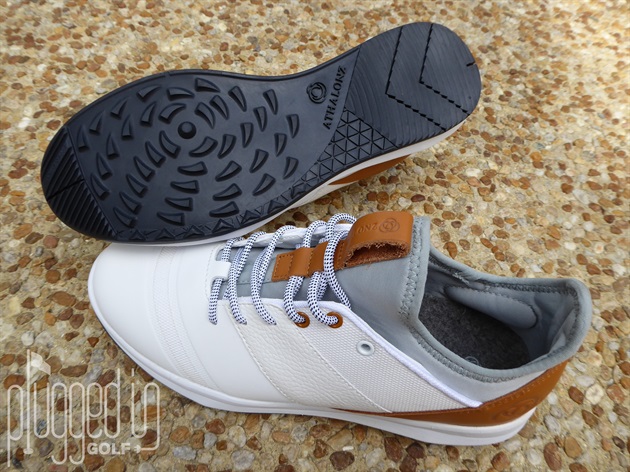 Moving to the other elements of the EnVe, Meeker and I both found the traction to be better than expected.  The tread on the sole is not particularly deep, but neither of us had any slippage.  Overall, I would say that the traction is above average for a spikeless shoe.

I was concerned that the “tilted” insoles would make walking uncomfortable, but this wasn’t the case.  It seems a bit hard to believe, but the tilt was noticeable at address but not when I was in motion.

Finally, the Athalonz EnVe is water resistant but not waterproof.  If you’re a mudder, you’ll need a different pair for your adventures in the rain. 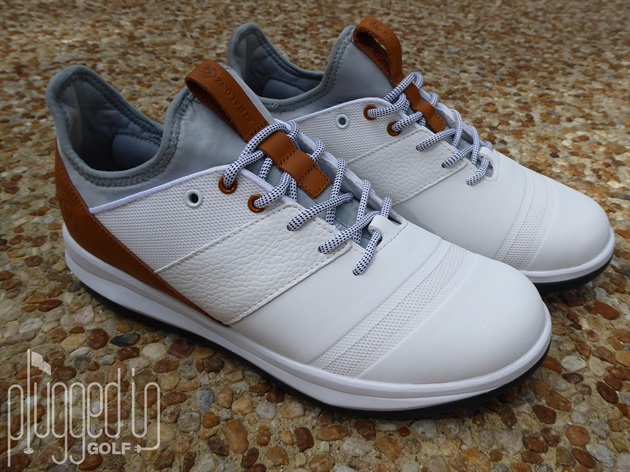 If you’re struggling with losing your balance during your swing, the Athalonz EnVe golf shoe may provide the immediate improvement that they claim.  This is not going to be a fit for every golfer, but some will find significant benefits from this design.