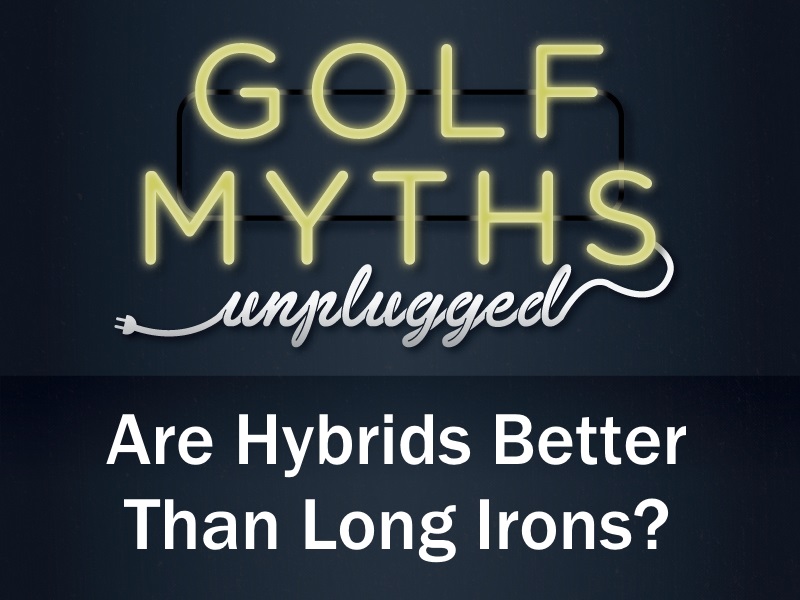 From equipment “experts” to the commentators on TV to golf instructors, virtually everyone tells amateurs the same thing: play more hybrids.  They’re supposed to be easier to hit, more accurate, and longer, so why wouldn’t you take the extra help?

Perhaps because you don’t believe everything you hear on TV.  Neither do we, so we set out to test whether or not hybrids live up to their billing as wonder clubs. 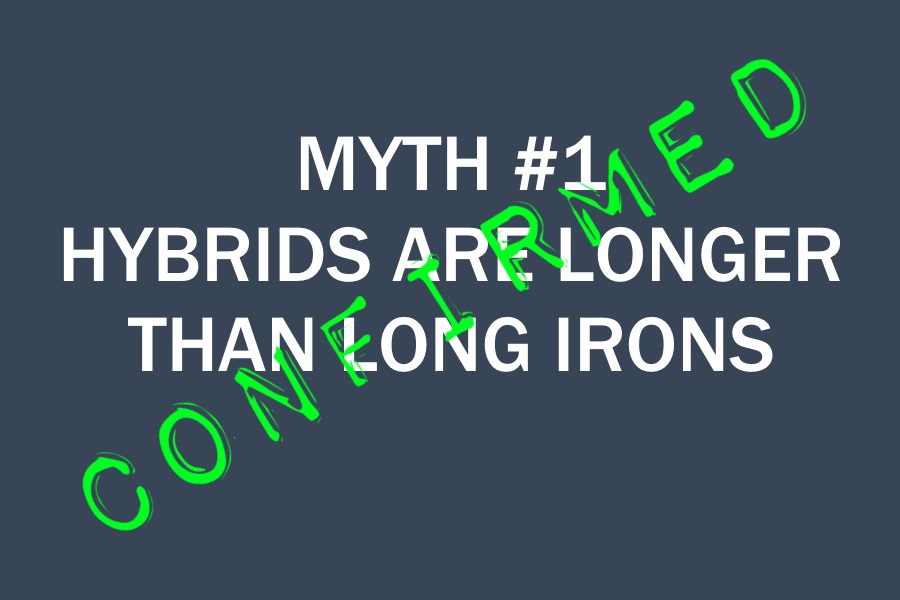 This myth is 100% confirmed: controlling for loft, hybrids are longer, often much longer.

When we look at the players as individuals, we see the same thing.  All of our testers averaged more ball speed, more carry distance, and more total distance with their hybrid compared to their long iron.  For one tester the gap was 18 yards!

There are some very good explanation for this.  First, hybrids are often longer at the same loft compared to irons.  Additionally, the shafts are typically lighter than comparable iron shafts.  Perhaps most importantly, hybrids have large, hollow heads with hot, flexible faces.  This construction gives them a significant ball speed advantage, even as irons become more sophisticated. 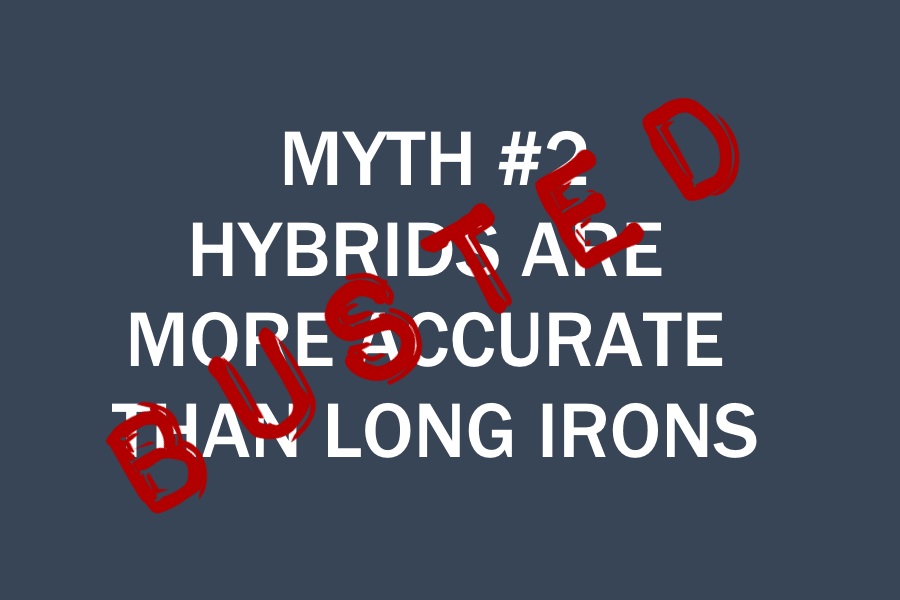 Hybrids definitely provide a distance advantage, but when it comes to accuracy, long irons trump hybrids.

As a whole, our group hit their long iron shots 6 yards closer to their target than their hybrid shots.  That’s the difference between a good look at birdie and a shot that might not even be on the green.

The data is even more compelling when we look at the players individually.  Every player in our test posted a better accuracy average with their long iron compared to their hybrid.  Additionally, more bad shots (shots more than 10 yards off line) were hit with hybrids (35 vs 20).

We did look at two other metrics that showed hybrids and long irons to be more equal.  When we look at the accuracy range (distance from best shot to worst shot), 4 out of 5 players were better with their hybrid.  This is a bit deceptive, however, because the differences for three of those players was less than 1.5 yards.  Similarly, when we look at players’ worst shots, it is apparent that golfers are equally capable of sending hybrids and long irons significantly off line. 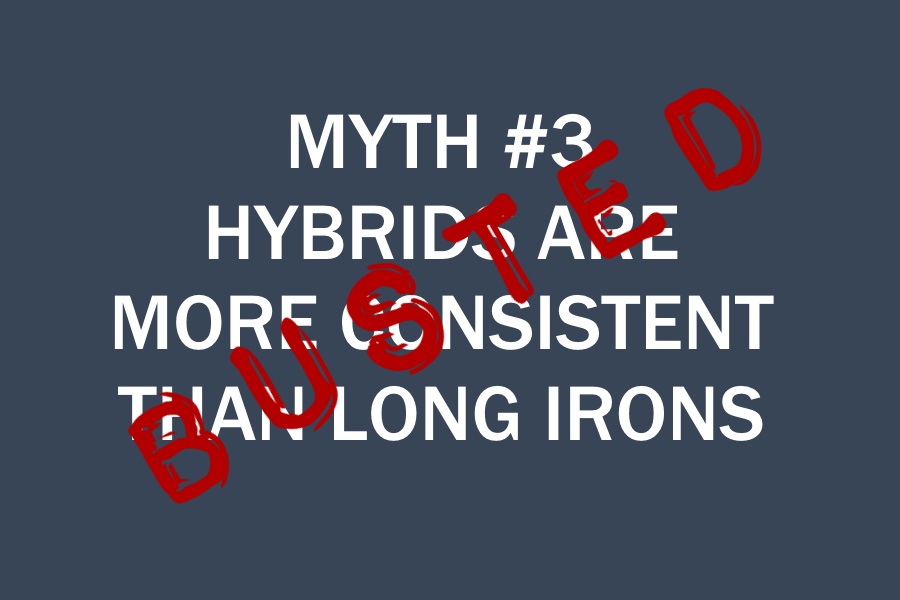 Since consistency is a magic word with golfers, we wanted to look at this in as many dimensions as possible.  We will explain each one individually, but we’ll deliver the headline first: hybrids are not more consistent than long irons.

Let’s start by restating the point about accuracy: hybrids are not more accurate than long irons, nor are they more consistent in terms of accuracy.

When we look at distance, we see that hybrids are longer, but that doesn’t make them more consistent.  4 of our 5 players had larger distance ranges (the distance between their longest and shortest shots) with hybrids.  We saw that with a hybrid or long iron, the worst shot went about the same distance; the hybrid simply hit its best shot farther.  We also looked at shots that were “bad” from a distance perspective – more than 15 yards short of the average – and the difference was stark.  When looking at carry distances, our group had 10 bad shots with hybrids, just 6 with long irons.  If we switch to total distance, the tally was 9 to 4, advantage long irons.

Finally, we looked at launch angles and spin rates.  While these metrics are certainly secondary to distance and accuracy, they’re important to scoring because they tell us how the ball will perform in the wind and what it will do when it lands.  Long irons proved to be much more consistent with regard to launch and spin.  Each tester had smaller ranges of launch angles and spin rates with their long irons compared to their hybrids.  Looking at the group averages shows that it isn’t a small difference either: the group’s launch angle range was just 4 degrees with long irons, but it was over 13 degrees with a hybrid.  Similarly, the average spin range with a long iron was approximately 1200 RPM with a long iron, but nearly 3100 RPM with a hybrid.

Our data shows that hybrids are not the miracle clubs that many people make them out to be, but does that mean you shouldn’t play them?  Absolutely not.

Hybrids should be in the bag of most golfers, but it’s important to understand what they do well and where they struggle.  The extra distance alone is a huge advantage.  Additionally, the higher launch and spin are great for many players.  However, the larger heads can produce wild shot shapes due to gear effect, and hybrids do not guarantee good contact.

In hybrids, as much or more than with other clubs, fitting is critical – you can’t simply pick something off the rack and hope to be successful.  You need to find a head and shaft combination that will produce the distance you need with the ball flight that you want.  Between hybrids, long irons, and utility clubs, you have more choices here than anywhere else in your bag, so having a fitter guide you through your choice is invaluable.

What golf myths do you want to see unplugged?  Tell us in the comments below!