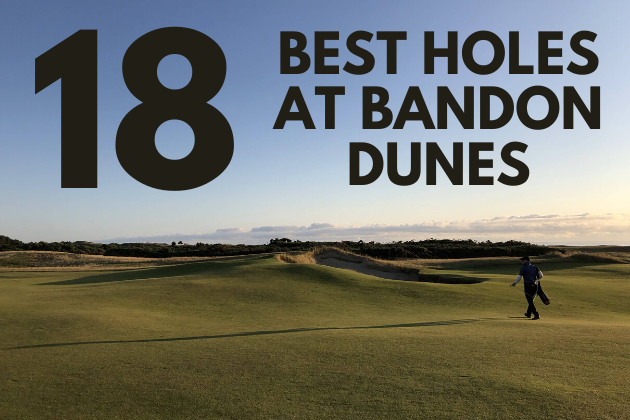 The argument over the best course at Bandon Dunes and the ranking of the courses can go on forever because there are no wrong answers [we discussed that topic HERE].  At the end of our recent trip to golf mecca, our group decided to dive down an even deeper rabbit hole: creating the perfect 18 holes at Bandon Dunes.  Here’s what we came up with.

The only rule that we imposed was that every hole had to be used in its original position.  That is to say, we couldn’t make #16 at Bandon Dunes the third hole on our fantasy course.

Each member of our panel created their own 18 hole course.  Lists were compared, majority ruled.  The ties were resolved through an…enthusiastic…Zoom call.

This was one of four holes that was unanimously selected by our panel.  It’s a perfect opening hole.  There’s plenty of width off the tee, the reveal of the Pacific Ocean is breathtaking, and it gives you an opportunity to start your round under par. 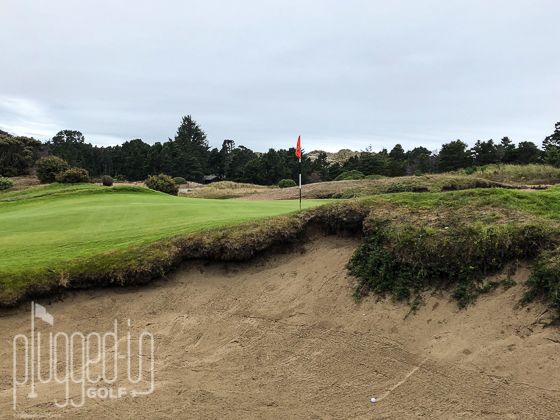 The last hole before you’re enveloped in the forest at Bandon Trails, this tee shot demands total control of your ball from left to right.  Too much fade or draw and you’ll be in a bunker or worse. 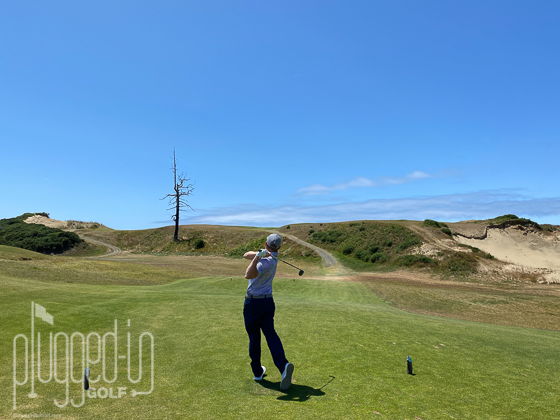 The second of our unanimous selections is home to the Ghost Tree, which is reason enough for it to appear on this list.  This hole provides two great thrills: hitting your tee shot over the ridge and past the Ghost Tree, and then cresting the ridge to see the vastness of Old Mac laid out in front of you.

While #4 at Bandon Dunes was one of the holes that I knew had to be on this list, it did face some extremely stiff competition.  The fourth holes at Pacific Dunes and Bandon Trails are outstanding which made this a tough decision.  In the end, however, #4 at Bandon Dunes is too pivotal to the round, too memorable, and just too damn good to not make the cut.

The longest par 3 at Sheep Ranch looks benign, but subtle, devious contours will repel short or off target shots.  A large putting surface makes it easy to hit the green in regulation and still walk away with a bogey. 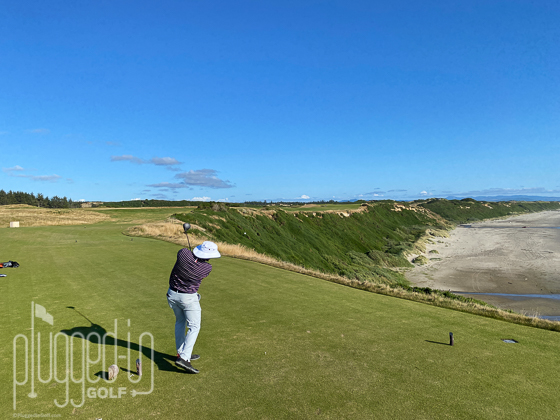 Our third unanimous selection is here largely on the strength of the tee shot.  The drive is cape hole-esque as you get to decide how much of the coastline you think you can bite off.  Even after a well-placed tee ball, your work isn’t done because this green falls off to the front and back. 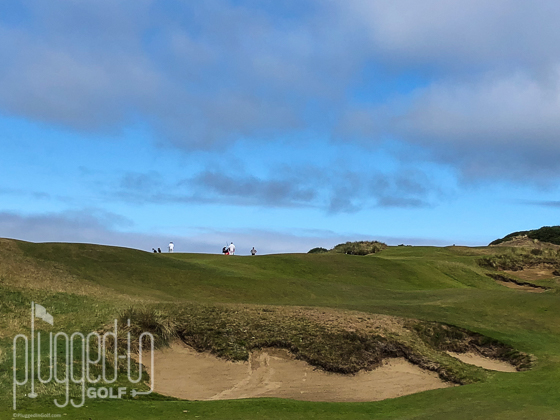 I’m not sure what’s tougher: the second shot on “Ocean” or the walk that follows it.  Either way, you’re rewarded for getting to the green with spectacular views and an opportunity to stop at the snack shack before playing the downhill Biarritz par 3.

The more accessible of the two driveable par 4s at Bandon Trails, this hole begs you to take a chance.  With bunkers on three sides, this isn’t an easy approach even with a wedge, so you might as well try to leave with a good story. 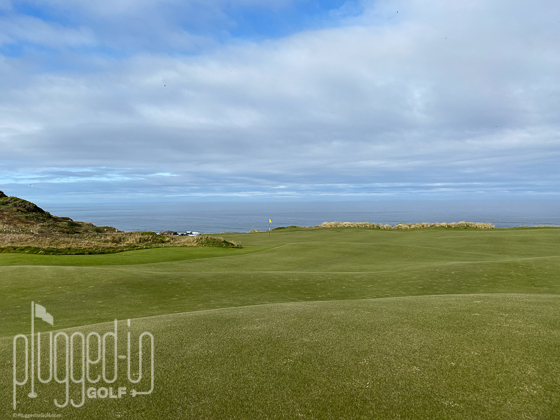 Playing to the very corner of the property, #9 asks you to hit your approach to an infinity green that appears to fall off the cliff and into the Pacific Ocean.  Leaving that shot short is an understandable error. 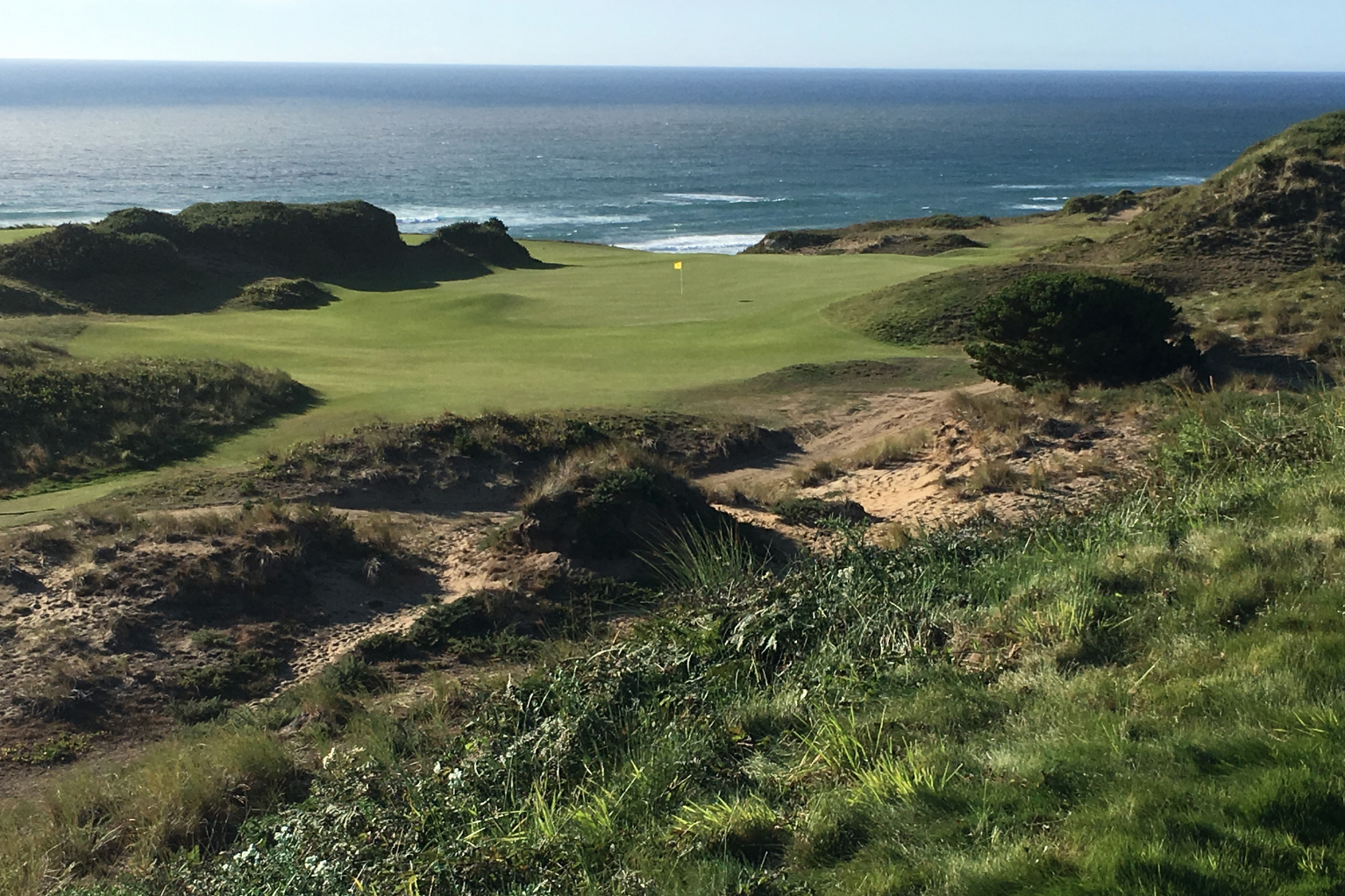 This par 3 has two sets of tees, and the hole is beautiful and challenging from either one.  Playing from high on the hill, as you see above, you have an awkward angle into the green.  From the lower tee, you approach the hole straight on but are faced with a bigger forced carry.  Though this isn’t a long hole, the wind can make you second guess your club selection, over swing, and write down an ugly number. 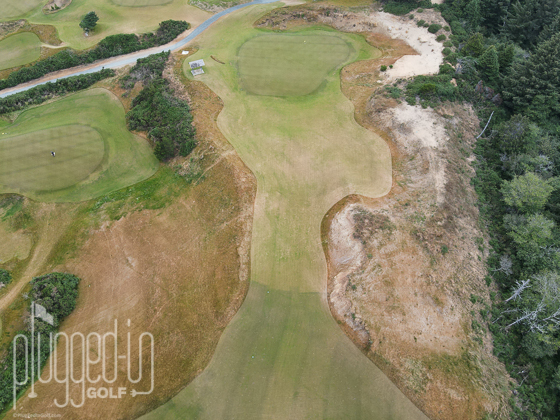 The best par 5 at Sheep Ranch would have been another unanimous selection were it not for Dylan’s obsession with Pacific Dunes, but I digress.  This is as far as Sheep Ranch gets from the ocean, but that doesn’t mean it lacks for drama.  Approaching the green means navigating “The Volcano” – the highest point on the course – and a shot that is much longer than it looks.

Much like #10 at Pacific Dunes, the wind makes this hole much tougher than the scorecard indicates.  Add to that a very shallow green and one of the meanest bunkers on the property and you have a hole that will make you very happy with a 3. 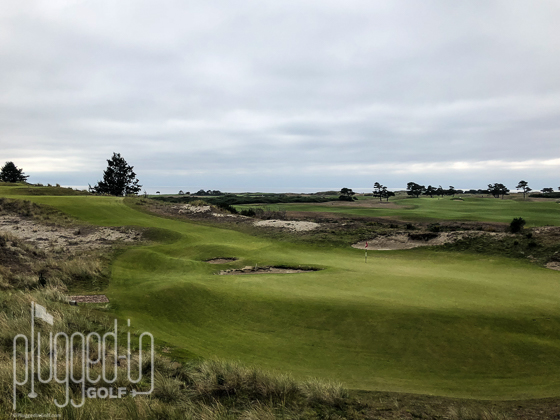 This is the first hole that caused a real fight among the committee.  #13 at Pacific was a very strong contender, but the contingent arguing for the inclusion of the Preserve carried the day.  The winning argument was that you can’t omit the most memorable, talked about holes, an argument that was also relevant on #14… 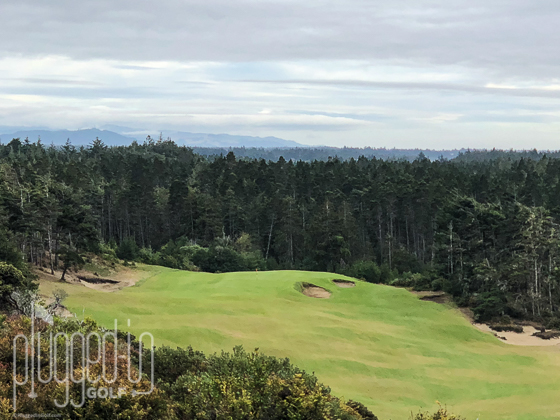 This hole, along with #4, presented the toughest choices.  The group was divided between Bandon Trails and Old MacDonald, with Pacific Dunes and Bandon Dunes each offering compelling options, too.  Ultimately, as with #13, we decided that you can’t tell the story of Bandon Dunes without this love-it-or-hate-it short par 4.

A solid, mid-length par 5 plays uphill and toward the ocean before the course turns to wrap back around the ridge.  A very fun hole, if not the most visually dramatic. 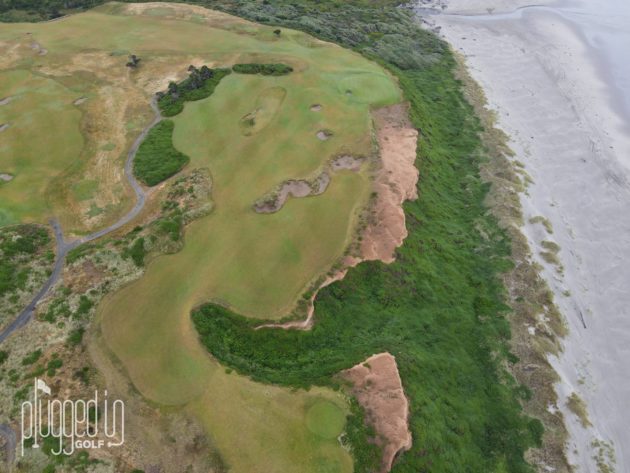 Our final unanimous choice is perhaps the most famous hole at the entire resort.  Even though four full length courses have come after Bandon Dunes, some on arguably better pieces of property, I’m not sure that any hole is as beautiful, exciting, and inspiring as the driveable par 4 that sits at the edge of the Pacific Ocean.

Our Trails-stans were pleased to see the inclusion of the best par 3 at their favorite course.  This is a picturesque hole with a fantastic green and plenty of challenge. 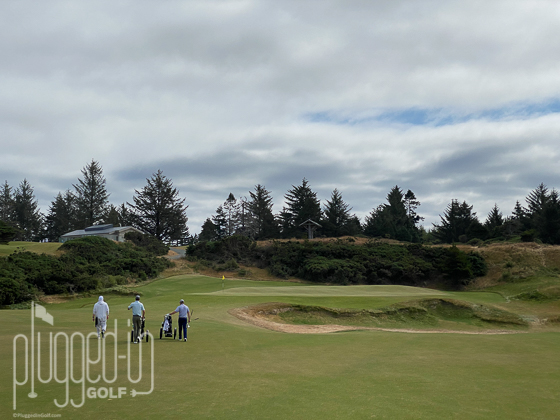 In a fitting end to this exercise, everyone on our group picked a different closing hole.  Sheep Ranch won by virtue of being my first pick and everyone else’s second choice.  The group noted that, interestingly, #18 was one of the weaker groups and, if we were ignoring hole numbers, none of these would appear on our top 18.  Nonetheless, the closing hole at Sheep Ranch offers a nice bookend to our opening hole and another chance to make birdie or eagle.

The course features 3 holes from Bandon Dunes, 1 from Pacific Dunes, 4 from Bandon Trails, 3 from Old MacDonald, 6 from Sheep Ranch, and 1 from Bandon Preserve.  Pacific Dunes feels horribly underrepresented for a course that we all agree is at least the second best on the property.  Were we to reveal our second choice for each hole, I think Pacific Dunes would have the most by a mile.

Thoughts on the Process

Not allowing ourselves to renumber holes led to some interesting insights.  It struck me that there are certain numbers (#3, #4, #8, #14, #16) that were packed with great holes and others that were, by Bandon standards, lackluster.  It felt a bit like the NCAA Tournament – because of where you fall in the bracket, some great holes are left out and some that aren’t even the best on their course make it through.

Another way to pick the best 18 would be to rank every hole at Bandon Dunes, which would be a daunting, though enjoyable, task.  We may do that in the future if only to see how that list differs from this one.  Some changes would definitely be made, which leads us to…

Mike had the course that most closely resembled our final product with 15 “correct” selections.

On average, our panel selected 3.25 holes from Bandon Dunes, 3 from Pacific Dunes, 2.5 from Bandon Trails, 3 from Old MacDonald, 5.5 from Sheep Ranch, and 0.75 from Bandon Preserve.

What are your favorite holes at Bandon Dunes?

Tell us in the comments section!