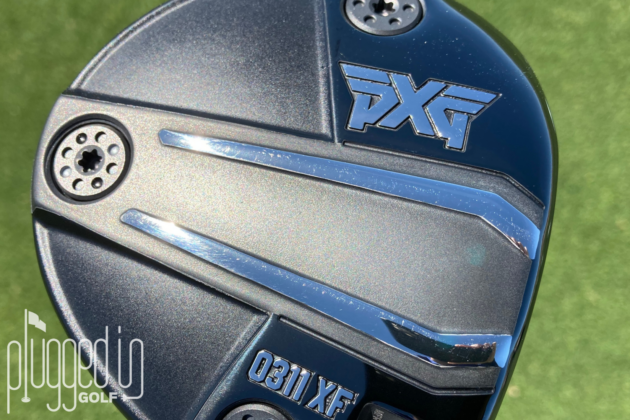 The PXG 0311 XF GEN5 fairway wood is long, straight, and forgiving.  Truly an upgrade from the previous generation in every way. 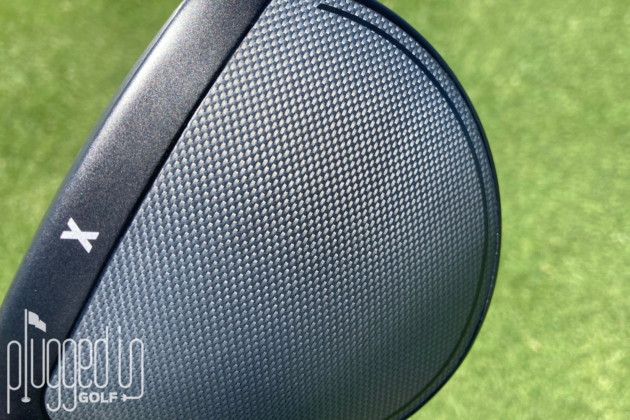 PXG has changed its naming conventions for GEN5.  Previous generations were confusing (driver was 0811, fairway wood was 0341, hybrid 0317, etc).  Now, everything in PXG’s flagship line bears the 0311 name, with the more forgiving versions having XF tacked on.  I’ve already stated that I think the woods are the biggest surprise of the GEN5 lineup (review of the 0311 GEN5 Fairway Wood HERE).  Read on to find out what’s new about the 0311 XF fairway wood and how it compares to the standard 0311. 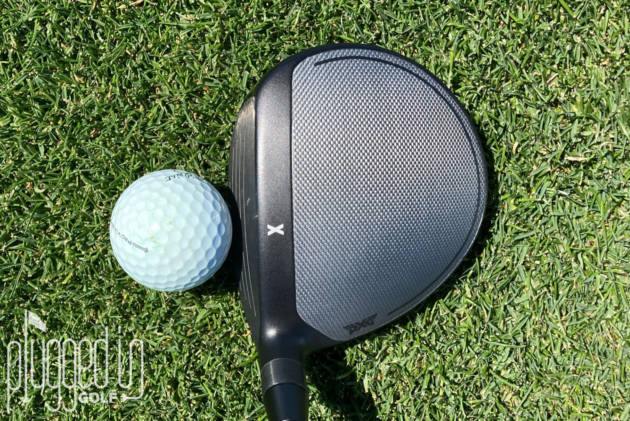 The 0311 GEN5 fairway wood represents an extension of the looks of GEN4.  The AV carbon fiber has been expanded to cover the majority of the crown.  The brightness of the material has also been toned down.  Both of these changes are welcome to my eye as the silver of GEN4 was very bright and the shape was uncomfortable to look at.  GEN5 looks unique and eye-catching but not over the top.

The 0311 XF GEN5 fairway wood has a traditional look at address, with a nicely rounded head shape.  The face appears more square, and the side walls are more vertical than sloped.  The sole has been made flatter, helping keep mass low and push weight to the perimeter.  In terms of shape, it’s very similar to the standard 0311 FW but with a larger footprint.

Flipping to the sole, the club has a minimal, aerodynamic look.  One feature that sets the 0311 XF apart from its sibling is the railed sole.  This is a proven feature that offers golfers a little help keeping the face square through the turf.  You’ll also notice the three weight ports have been shifted to the extreme perimeter of the clubhead in order to boost MOI and improve sound and feel. 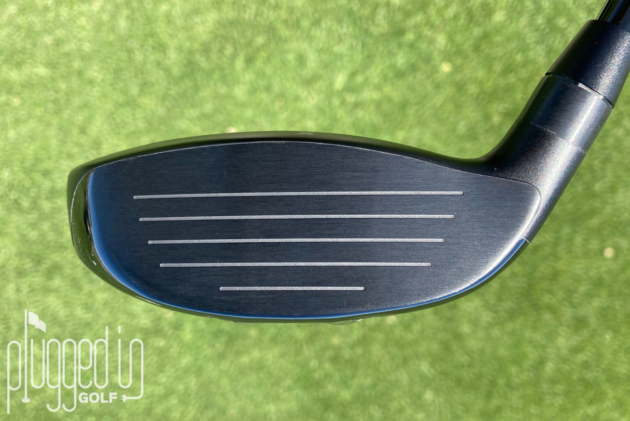 PXG’s GEN5 woods have sublime sound & feel.  The 0311 XF fairway wood is no different.  The feel is soft and explosive at the same time.  There’s just slightly less feedback through the hands compared with the standard 0311.  However, it’s still easy to differentiate between a pure hit and something off-center.

If you’ve read my other reviews of the GEN5 drivers and woods, the below will sound familiar.  But I think it’s critical to understand the product so I’m going to include it again.

Each of the products in the GEN5 line of woods has benefited from an R&D process called Modal Analysis.  It’s a way to quantify sound and feel in a golf club, something that is usually very difficult to do.  PXG’s engineers have clearly made good use of that data in the production of the 0311 GEN5 fairway wood.

Briefly, Modal Analysis is a study that uses the mass and stiffness of a structure to identify various frequencies vibrating throughout that object.  This process is frequently used in industries where noise is paramount, such as automobiles and musical instruments.  Through player testing, it became clear that most players preferred sounds created by higher modal frequencies.  Thus, GEN5 woods have significantly higher frequencies than GEN4.

One thing that hasn’t changed is the HT1770 high strength steel face material.  It’s been used in every club since PXG’s launch and it’s clearly one of the reasons for this club’s great feel. 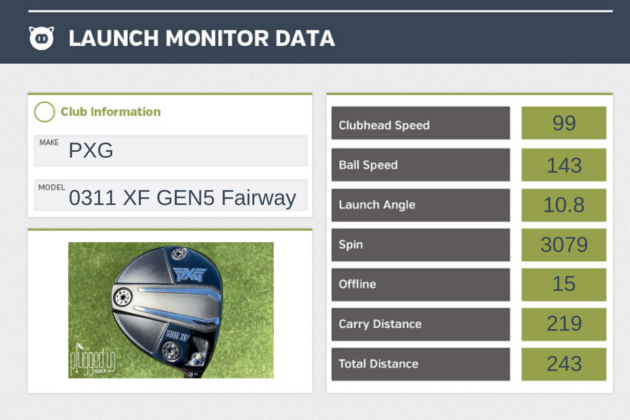 The 0311 XF GEN5 fairway wood has been changed and improved in a number of ways.  Its looks, sound, and feel are all included but chief among them is performance.  Compared to GEN4, GEN5 has nearly 2 more mph ball speed and an additional 6 yards of carry.  Spin numbers stay virtually the same.  GEN5 also launches one degree higher, on average. 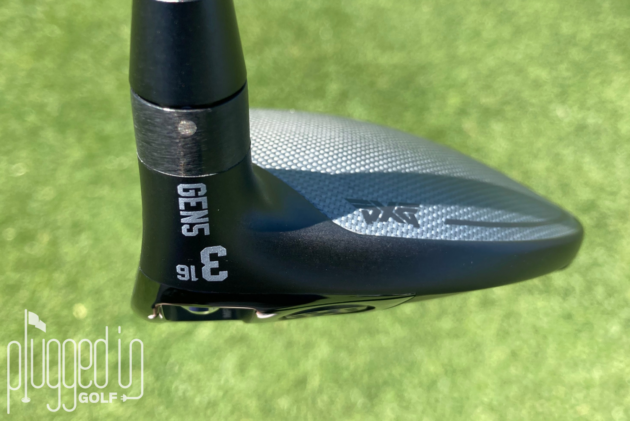 On the course, the 0311 XF GEN5 is a star.  Shots launch high with ease.  Mishits seem to go less wayward and longer than they probably deserve.  It’s slightly more forgiving than the 0311 but there isn’t a huge difference.  To me, the biggest differences are in the look and the loft options. 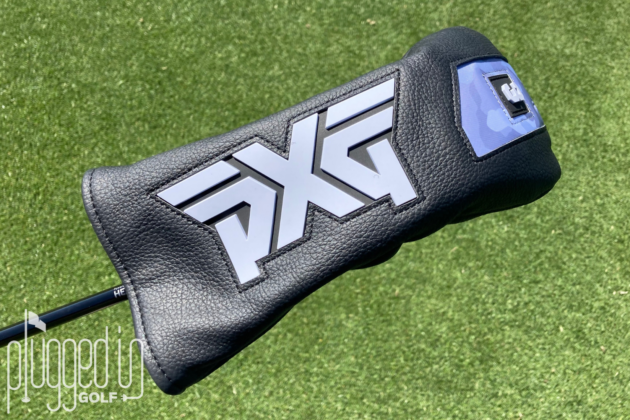 The default setting for the weight ports puts 10 gram weights in the heel and back with a 2.5 gram weight in the toe.  This can be adjusted to suit the player’s needs.  For most players, there’s no need to change it because it provides just a touch of help keeping shots from going right, especially off the deck.

As with all PXG woods, loft and lie can be adjusted +/- 1.5° via the adjustable hosel.  Using the “PXG” setting flattens the lie angle.  The 3 wood I tested was adjusted down to 15° of loft. 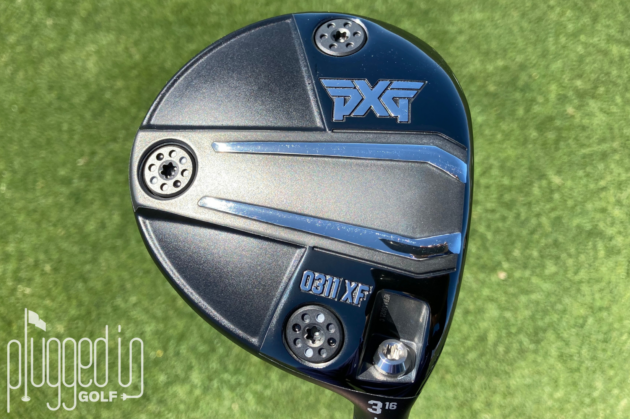 The 0311 XF fairway wood is a game-changer for PXG and it could be for your game as well.  It’s an improvement over GEN4 in every way.  I’m gaming the standard 0311 fairway wood this year, and I think PXG fans and open-minded golfers will find a lot to love in the 0311 XF as well. 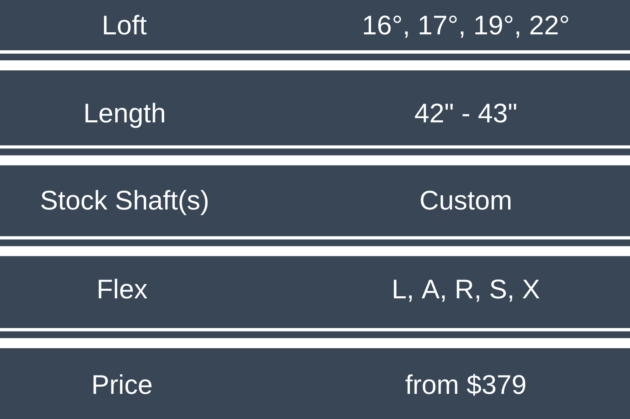