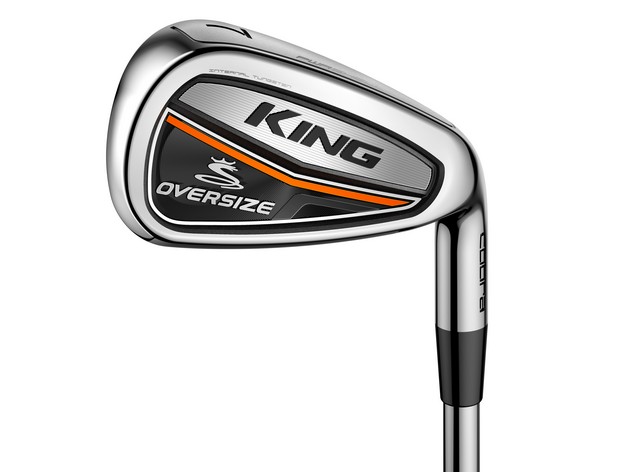 “At COBRA Golf we are excited to bring back the KING Oversized set, and introduce our first iron that is at the USGA’s COR Limit,” said Jose Miraflor, Sr. Director of Product Marketing, COBRA Golf. “The oversized head will provide golfers with even more speed and distance from center and off-center.”

COBRA Golf released its first set of Oversized irons in 1994 and they quickly became the performance standard and the game’s best-selling irons from 1995-1996. Now, the new and improved KING Oversized irons are once again poised to be true game-changers.

Featuring an all new PWRshell face technology, which helps to lower and center CG (Center of Gravity), and provides a thinner, lighter face and sole structure, delivering higher ball speeds across the face for more distance. A full-hollow body construction throughout the set, delivers a soft, yet solid sound for higher launch and improved consistency. Additionally, a 100% milled face improves groove structures for maximum spin and trajectory control, while progressive spin technology delivers optimum spin performance throughout the set. V-grooves on the 4-6 irons reduce spin for more distance, U-grooves on the 7-PW increase spin for more controlled shots into greens, and wedge spaced grooves on the GW and SW produce extra spin for scoring around the green.

Multi-material cavity construction with a new aluminum medallion badge saves weight that is then positioned by high density tungsten weighting in the toe, creating the low and centered CG in an oversized head. A premium nickel chrome finish provides long-lasting durability and smooth aesthetics.

“Really the key to distance is lower CG, which is a big challenge when you create a larger iron,” said Miraflor. “Our multi-material cavity construction and strategically placed tungsten weighting in our KING Oversized irons allows us to place CG lower, which ultimately delivers more speed and higher launch.”

The Oversized iron set in RH or LH, available November 4, 2016 in store and at cobragolf.com/oversized, is comprised of 8 irons (4-GW) available in steel ($999) in stiff and regular flex or graphite ($1,099) in stiff, regular and light flex. The irons feature a black Lamkin Ace Crossline grip and come stock with a UST Recoil 460 ES graphite shaft or a True Temper XP 85 steel shaft.

For more information on the entire KING family of products, visit cobragolf.com 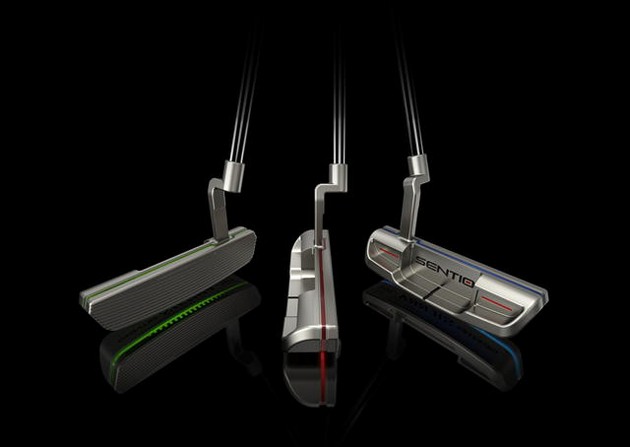 Acton, MA – After making their debut at the 2016 PGA Merchandise Show in January, Sentio Golf has announced that their Sierra 101 line of putters will now be available for sale directly through the company’s website and at select retail shops starting today. The line of blade-style putters features Sentio’s patented floating face technology which improves distance control and feel for players of all skill levels.

The new line’s unique construction separates the entire stainless steel face from the rest of the putter head with a vibration-dampening thermoplastic elastomer (TPE) core, through a process called insert molding.  According to Jim Varney, President of Sentio Golf, “Insert molding requires extremely tight manufacturing tolerances, so our metal components are made to some of the highest dimensional standards in the industry. Our proprietary TPE formulation bonds the two metal parts permanently together while keeping them separated from each other without any contact. This softens impact while keeping some of the pop, which we have found is critical for good distance control.”

The Sierra line includes three models, each with a color-coded translucent core, so that players can select the feel that matches their preference and playing conditions;

The difference in feel between the models is achieved by changing the durometer, or relative hardness, of the TPE which affects energy transfer to the ball.  According to the company, the energy transfer of each putter, measured as  Coefficient of Restitution or COR value, was developed to provide a range of feel that is not available with existing putters.  “Every player has an innate sense for distance control” explains Jim. “If you can match the tool to your expectations, it follows that you are going to make more putts.”

The geometry of the TPE core has been engineered to provide several performance benefits, including;

Sentio will be introducing a limited run of 100 special tour prototype putters called the Century Edition on September 27, featuring billet-milled 303 stainless steel body and a unique black bronze PVD finish.  More information will be provided by the company at that time. 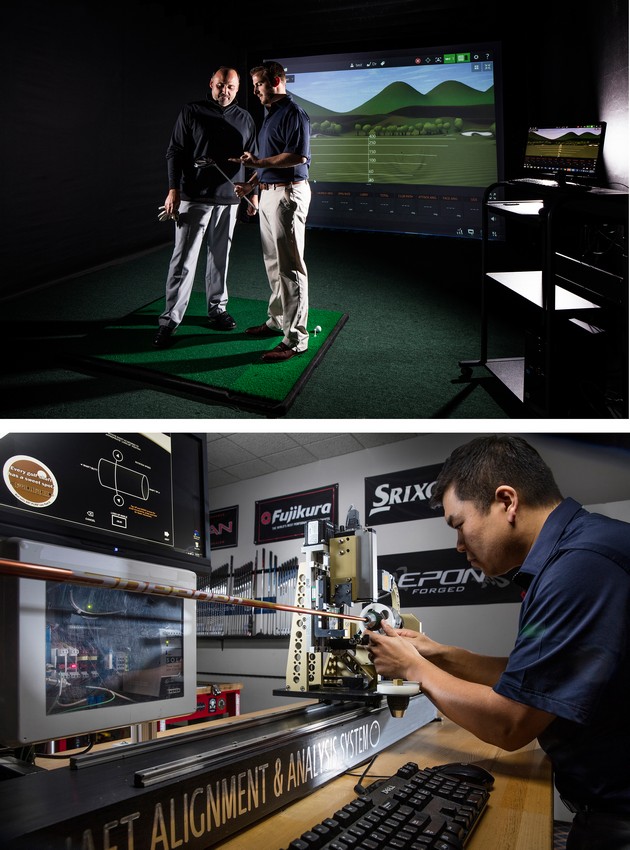 Chicago, IL, Sept 16, 2016 – The premium club fitting business is a bright spot in the stagnant golf industry. Nike Golf recently announced they are abandoning the golf club business and now Golfsmith is filing for bankruptcy. Despite this recent news, premium club fitting companies like Club Champion are taking center stage in this soaring segment of the golf business.

Club Champion, the country’s leading premium golf club fitting and building company, recently opened its 16th new fitting studio in August on Long Island. The company has opened five stores this year with another four locations to open by January of 2017 – all of the stores are company owned. According to Club Champion’s CEO Joe Lee, “We are leading an expanding niche in the golf retail space. This year, overall sales have grown by more than 80% and same store sales are fueling a lot of that growth.”

Premium club fitters are different from other golf retailers that perform fittings because they can mix and match any brand of head and shaft. Club Champion rises above the competition because it offers 15,000 combinations, uses highly trained experienced master fitters in conjunction with the most advanced technology, and assembles clubs in-house to precise tolerances. Ranked among the 100 Best Club Fitters by Golf Digest since the list started, Club Champion utilizes an advanced coupling system that can combine any head and shaft, so golfers hit the precise combination to be custom built for them. Lee stated, “Most golf stores or club professionals use fitting carts with limited options; you are unable to mix and match across different brands. Club Champion offers hundreds of shafts, many of which are not available through other fitters and retailers.” The company prides itself on an unbiased approach where no specific vendor is promoted. The only goal is to find the best combination of components to lower golfers’ scores.

Studies by top industry publications illustrate the benefits of premium club fitting and point to reasons why this is a growing trend in the golf industry. A Golf Magazine study concluded that 90% of U.S. golfers are likely playing with improperly fit clubs. A 2013 Golf Digest study found that 8 out of 9 golfers who upgraded to custom-fit clubs by Club Champion added an average of 21 yards off the tee, significantly reduced their shot dispersion and lowered their scores by as much as 6 strokes per round. Results like this are fueling the premium club-fitting boom.

According to former PGA Tour Player, Jay Williamson, “I had access to every brand of shaft and head, but I never understood what they did for me. I didn’t have the opportunity to experiment like I do at Club Champion. They bring the same level of service players receive on Tour, including the newest heads and shafts and the most advanced fitting technology, to the masses. If you are a committed golfer at any level, I highly recommend it.”

Jake Thurm, PGA pro and Kevin Streelman’s swing coach, quickly realized that Club Champion provides access to premium equipment many customers cannot find elsewhere. He believes, “Equipment is a large part of the equation. It’s always better to have the equipment fit you as opposed to you adjusting to your equipment.” He adds, “If you’re a golf geek like me, you just want to get in there. They have everything. They order your equipment, build it for you, and ensure what you’re using is helping your golf game. If they don’t find anything clearly better, they simply tell you.”

Says company Chairman and Co-Founder Keith Bank, “There are more than 24 million golfers and 10 million passionate golfers out there who want to improve their game. The retail landscape is changing and consumers want tailored products that make their lives easier and the game more fun. Club Champion has tapped into that wave of change and we are building a successful retail model that will drive growth for the next decade.”

More information on the company can be found at clubchampiongolf.com. 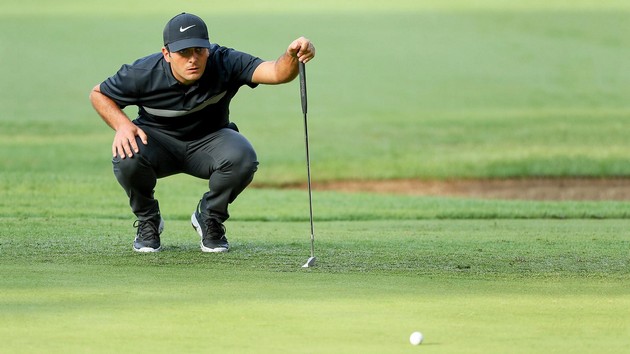 Italian Francesco Molinari kept a cool head to secure an historic victory at the Italian Open hosted at the Golf Club Milano.

The 33-year-old recorded 22 birdies and two eagles during a rain-affected four days, playing the final two rounds in 13 under par. The win marks Molinari’s second triumph in the Open, the first time an Italian has claimed the trophy twice the tournament joined The European Tour schedule in 1972.

“I was inspired by the energy that the fans brought to the course, so to win my national open for the second time in front of them is very special,” said Molinari, who previously won the tournament a decade ago in 2006, and has won four tour events since 2012.

In addition to finishing atop the leaderboard, Molinari also finished in 5th place (80.6%) for GIR, and 4th in the driving accuracy stakes (71.4%).

Molinari wore Nike Performance Apparel for the duration of the week, including the Nike MM Fly Sphere Graphic Polo. He also relied on the stability and comfort of the Nike FI Premiere footwear. The FI Premiere features Nike Flyweave material on the upper, providing lightweight support and superior fit.