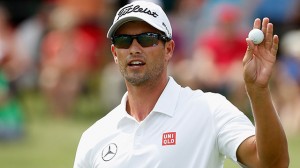 FORT WORTH, Texas — Adam Scott made a 7-foot birdie putt on the third hole of a playoff Sunday to end his first week as the world’s No. 1 player with a victory at Colonial.

Jason Dufner, who made a 25-foot birdie putt on No. 18 in regulation, slid a 40-footer past when he and Scott played the 18th hole for the second time during the playoff. Scott then made the 7-footer for his 11th PGA Tour victory. 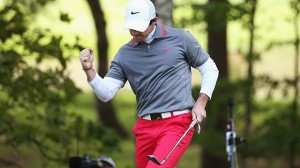 The double major winner came from seven shots back at the start of the final round to shoot a 6-under 66 and win by 1 stroke with an overall 14-under 274 on the Wentworth course.

It was McIlroy’s first European Tour success since December 2012 and ends a run of eight second-place finishes in 11 events this season. 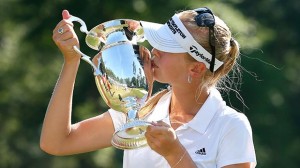 Jessica Korda (-20) became the third two-time winner on the LPGA Tour this year when she won the 2014 Airbus LPGA Classic today by a stroke over Anna Nordqvist (-19). It was once again a stacked leaderboard at an LPGA event this year with an exciting fight to the finish, with eight players within four shots of Korda at the end.

Korda joins Nordqvist and Webb with two wins and said this win was a sweet one because she felt she hasn’t been playing up to her standards after Bahamas.

“I have not been playing well since I basically won in the Bahamas, and still trying to work on the same swing thoughts that Grant and I have been working on, so for it to finally pay off here is really nice,” Korda said.