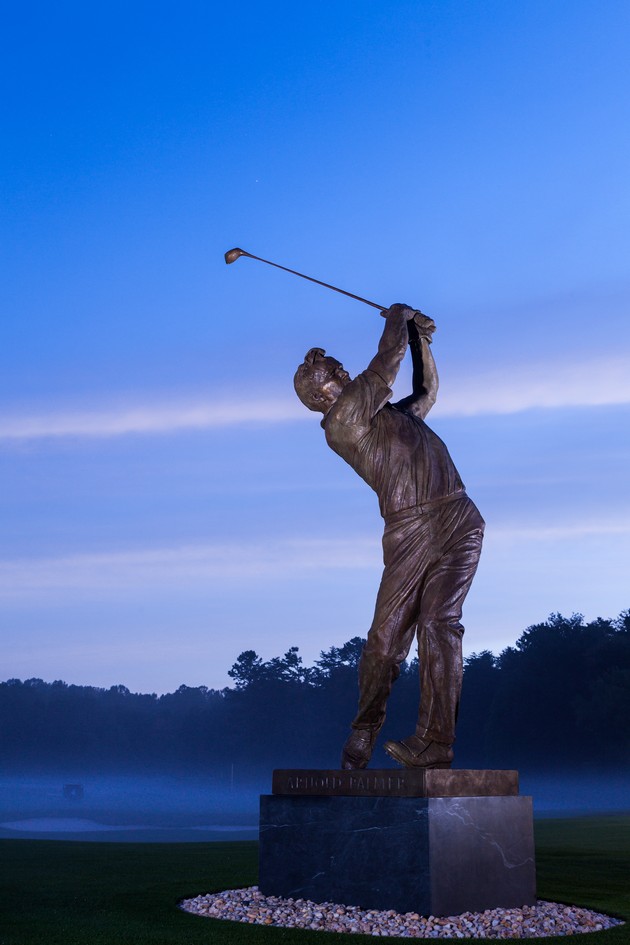 ORLANDO, Fla.  — Capturing his energy and essence, a 13-foot bronze statue of the late Arnold Palmer will be unveiled Saturday, March 11 and on display throughout the 2017 Arnold Palmer Invitational presented by Mastercard.

The statue is a replica of one that stands at Wake Forest University, Palmer’s alma mater. Weighing 1,392 pounds, the statue depicts Palmer as he finishes a powerful swing and was inspired by Palmer’s early career, including his 1964 Masters victory.

Mastercard, the tournament’s long-time presenting sponsor, covered costs for the statue’s production, shipping and installation as a way to honor Palmer and his legacy. The company has supported the API for more than a decade, as well as the Arnold Palmer Hospital for Children and Winnie Palmer Hospital for Women & Babies.

“We’re truly honored to play a role in recognizing and celebrating Mr. Palmer and his enduring legacy,” said Craig Vosburg, President, North America. “While Mr. Palmer will not be with us this year, he will forever keep a watchful eye over the ‘deceptively simple and endlessly complicated game’ that is golf.”

On the morning of March 11, the statue will be unveiled during a breakfast event traditionally held for the 1,500 volunteers who staff Palmer’s tournament every year. The statue will then be on permanent display at the course, overlooking the first and 10th tees.

“There will be no ropes or fences around this statue,” said Marci Doyle, chief operating officer of the Arnold Palmer Invitational. “It will be infinitely approachable, just like Mr. Palmer.” 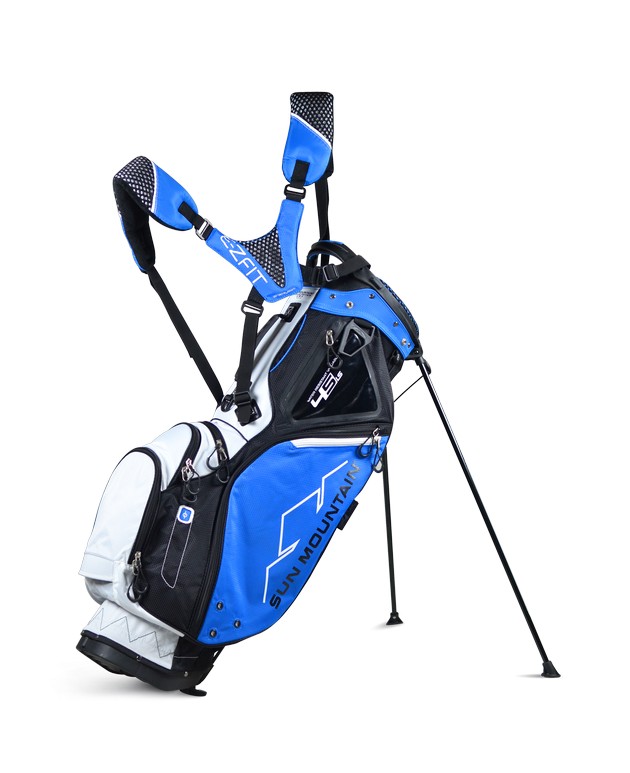 New LS Golf Bags Offer Something for Everyone

Missoula, Montana – The Sun Mountain LS (lightweight series) golf stand bags offer a full range of features and weights to please the individual golfer’s preferences. Bags include the minimalist’s two-and-a-half pound 2Five bag, the 3.5 LS, 4.5 LS and the cart bag with legs, five-and-a half pound 5.5 LS. With each progressively larger number comes additional pockets and features and a corresponding additional pound of weight. This Lightweight Series of golf stand bags is available now in stores and on-line with retail prices of 2Five ($219), 3.5LS ($229), 4.5LS ($209), and 5.5LS ($239). For the nearest Sun Mountain retailer call 800-227-9224 or visit www.sunmountain.com.

The Sun Mountain 2Five golf bag is the lightest, full-featured bag on the market weighing in at the scant 2.5 pounds. Sun Mountain reduced weight by using carbon-fiber legs, high strength-to-weight plastics, and ultra-lightweight and durable fabrics like those used in mountaineering tents. 2Five is offered in 10 different colors with a retail price of $219.99.

The 3.5 LS weighs 3.5 pounds and is designed for the golfer who likes an ultra-lightweight bag but wants a few more features. Like the 2Five, the 3.5 LS is constructed with lightweight nylon fabric, high-strength-to-weight plastic and carbon fiber legs. Adding a pound results in a thicker shoulder strap, a more cushioned hip pad, and three more pockets. 3.5 LS is available in seven colors at $229.99.

The 4.5 LS is a lightweight, mid-sized stand bag. Weighing just 4.5 pounds and incorporating the E-Z Fit Dual Strap System, the 4.5 LS is built for carrying and has numerous cart-friendly features. Cart-friendly features include a cart strap pass-through that runs behind the clothing pocket so the bag can be secured to a cart without blocking pocket access, a leg lock system to keep the legs firmly in place while the bag is carted, and a cart-friendly bottom. There is also a 4.5 LS 14-way offering an individual club divided top and a 4.5 LS Zero-G offering a hip-belt to take the weight off the shoulders. Retail prices are $209, $219 and $229, respectively.

Lastly is the 5.5 LS golf bag. The 5.5 LS is the biggest bag in Sun Mountain’s new lightweight series. The bag features a bigger, 11” diameter top with four, full-length club dividers to make getting clubs in and out a breeze. 5.5 LS also features nine pockets including: three water-resistant valuables pockets, a clear-view phone pocket and a velour-lined GPS pocket with a protective, thermo-formed front panel. 5.5 LS weighs 5.5 pounds and is available in eight colors with a retail price of $239.99. 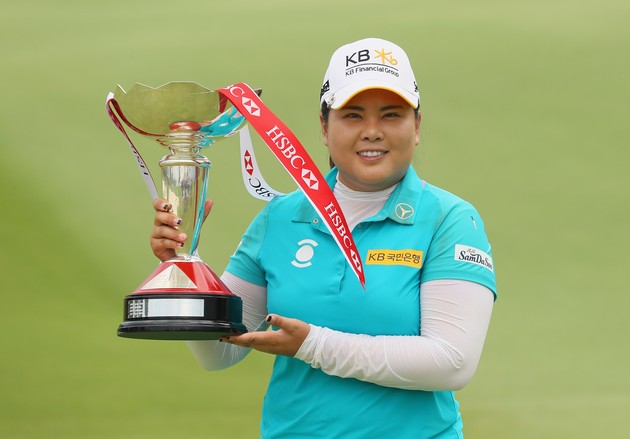 HUNTINGTON BEACH, CA – Srixon, Cleveland Golf and XXIO are proud to congratulate staffer Inbee Park for her stunning comeback victory over the weekend at the LPGA HSBC Women’s Champions in Singapore. Park, who began the final round at Sentosa Golf Club three shots off the lead, shot a course-record 64 in Sunday’s final round to post a 19-under-par total and win by one stroke. It was only her second LPGA start since coming back from a major thumb injury that forced her to miss six months of action.

“I thought it might take maybe a couple months to get back out on the Tour and to get my rhythm back. I thought I was going to be just a little bit rusty,” said Park. “That’s how I felt last week. This week was totally different. Especially the final round, [which] was just what I wanted.”

Srixon also congratulates Dean Burmester for winning the European Tour Tshwane Open in Waterkloof, South Africa. Burmester, who plays the new Srixon Z-STAR XV golf ball, closed with a 6-under-par 65 in the final round at Pretoria Country Club to win by three strokes. It’s the first career European Tour victory for Burmester, a 27-year-old South Africa native who has logged top-10 finishes in four of his first seven global starts in 2017.

Their golf games may be different, but Burmester and Park do have one important thing in common: they trust new Srixon Z-STAR Series golf balls on every shot. Burmester relied upon the incredible distance of the dual-core Z-STAR XV for his breakthrough win, and Park leaned on the exceptional feel and spin control of Z-STAR to top one of the strongest LPGA fields of the season.

Park also has the XXIO9 driver and new XXIO Forged irons (5-P) in the bag. XXIO, one of the most successful golf brands in Japan, creates premium, high-performance clubs for golfers with moderate swing speeds.

MEMPHIS, Tenn. (March 6, 2017) – The WGC-Mexico Championship winner solidified his position as world #1 with his second win in two starts this weekend. The victory in Mexico City follows his win at The Honda Classic and marks his 14th PGA TOUR career title.

Due to the altitude at Club de Golf Chapultepec, the champion relied on his 2-iron shafted with Project X HZRDUS Black throughout the tournament, including when he drove a 322-yard par-4 on the course’s opening hole during the third round.

• 8 of the top 10 finishers at The WGC-Mexico Championship trusted shafts by True Temper in their bag.