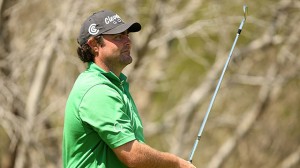 SAN ANTONIO — Steven Bowditch held on to win the Texas Open in windy conditions Sunday for his first PGA Tour victory and a spot in the Masters.

“I’m over the moon. I really can’t believe it,” said Bowditch, who attempted suicide in 2006 and has fought depression throughout his career.

CARLSBAD, Calif. – Anna Nordqvist rallied to win the Kia Classic on Sunday at Aviara for her second victory in her last four LPGA starts.

Two strokes behind leaders Cristie Kerr and Lizette Salas entering the round, Nordqvist closed with her second straight 5-under 67 for a one-stroke victory over Salas.

”I’m very excited. I still can’t believe it,” Nordqvist said. ”I was a couple of shots back going into today, but this morning I told myself to give it a shot and I ended up making quite of bit of birdies out there. I’m very excited to have two wins this season.”

Pace of play once again takes center stage on Tour

The good news? Things got noticeably quicker from there.

Not quick enough, though.