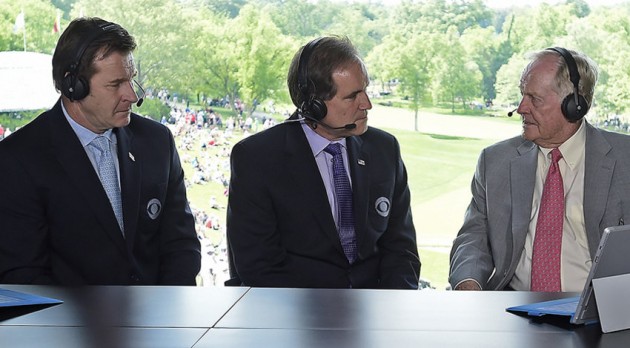 Nicklaus believes Woods will ‘figure it out’

DUBLIN, Ohio – Seeing Tiger Woods struggle reminded Jack Nicklaus of his efforts to rebuild his game after he failed to win in 1979.  It was Nicklaus’ first winless season as a professional. He touched his clubs just three times in the offseason — each time because of commitments — and began with the basics when he started preparing for the 1980 season.

‘I started right from scratch. I went to (Jack) Grout and I said, ‘Let’s start with the grip,’” Nicklaus said on Sunday at the Memorial Tournament presented by Nationwide. “But it was never 20 things. It was never revamping my golf swing.”

The struggles of Nicklaus and Woods aren’t exactly the same. Nicklaus endured just one winless season, and even during his “off” year he finished fourth at the Masters and second at the Open Championship. He finished 71st on the money list in 1979, though, after ranking no worse than ninth since 1962. Woods’ struggles have been deeper and his body has undergone multiple surgeries.

SOUTHERN PINES, N.C. … Power management company Eaton announced today that its Golf Pride Grips Division was the leading grip brand played by top collegiate players at the 2015 NCAA Men’s Division I Golf Championship. 88% of players competing at Concession Golf Club – 139 of the 159 players in the field – trusted their games to Golf Pride grips.

Golf Pride’s popular Tour Velvet® family of grips were used by 51 players at the NCAA Men’s Division I Championship, while 49 players trusted their championship quests to the MCC™ Family. Z-Grip® Cord was the next most popular grip in play with 30 players using it. Each of these Golf Pride families earned more usage than all other competitor grip brands combined.

“These results at the NCAAs affirm that the next generation of elite golfers trust their games to Golf Pride,” said Brandon Sowell, global sales and marketing director for Golf Pride. “Just like on the professional tours, it’s great to see that we have three distinctly different technology models being used – validating that we have a variety of grip technologies to meet both professionals’ and amateurs’ performance needs.”

PONTE VEDRA BEACH, Fla., and CHICAGO (June 8, 2015) – The PGA TOUR and EZLinks Golf, Inc., a pioneer in golf course technology and services, today announced the formation of a new company, EZLinks Golf LLC. A PGA TOUR affiliated company, EZLinks Golf LLC marks the TOUR’s entry into the tee time marketplace with TeeOff.com by PGA TOUR and underscores the TOUR’s and EZLinks’ ongoing commitment to growing the game through the production of industry-leading technology and marketing.

“A core mission of the PGA TOUR is to grow the game by leveraging our brand name, media assets and golfer reach to drive participation at every level of the sport,” said PGA TOUR Commissioner Tim Finchem. “We believe the creation of EZLinks Golf LLC will have a positive and direct influence on inspiring play at the recreational level. EZLinks has earned a reputation for putting clients first and for providing unparalleled service and support. EZLinks Golf LLC will build on this history and marks an exciting step forward for the TOUR.”

As an owner of the company, the PGA TOUR will be contributing its brand name and marketing assets to support the growth and success of EZLinks Golf LLC and its clients. EZLinks Golf LLC will be managed and operated by the standing EZLinks Golf leadership team led by Chief Executive Officer Gary Cohen.

“We are proud to bring the power of the PGA TOUR brand and massive audience to golf courses across North America,” said Cohen. “EZLinks has a long-standing commitment to being an advocate for golf courses and golfers alike and this investment will fuel our efforts.”

EZLinks Golf connects directly with millions of golfers each year operating the industry’s largest golf reservation center, EZLinks 24, answering more than 3 million calls in 2014, as well as through its online tee time reservation site. The newly branded TeeOff.com by PGA TOUR is already the second largest online reservation site in golf, a position that will be further strengthened by the addition of the PGA TOUR branding and marketing including national TV and radio. TeeOff.com by PGA TOUR will be tightly integrated with the PGA TOUR’s digital platforms, including fixed placement in the navigation on PGATOUR.COM.