“KENTWOOL is proud to be an American manufacturer with roots dating back to 1843, so we wanted to create a sock line to honor that heritage and help golfers celebrate our great country,” said Dan Murphy, president of KENTWOOL. “Something seems a bit disingenuous about companies who offer American-themed products but then choose to produce them off-shore. We offer a true Made in the USA product that is unrivaled in quality and comfort, and we’re excited to share it with golfers from sea to shining sea.”

KENTWOOL Men’s Tour Profile socks are constructed from a proprietary blend of Super Fine Merino Wool and other natural and high-tech performance fibers. Each pair is infused with innovative WINDspun technology to deliver unparalleled comfort and is designed to reduce friction, abrasion and muscle fatigue. In fact, KENTWOOL is so confident in the comfort of its socks, the company offers a lifetime “Blister-Free Guarantee” with the purchase of every pair.

The new KENTWOOL USA Collection will be available June 22nd at KENTWOOL.com and select retail locations. The USA Collection will feature a festive retail price of $17.76 per pair (regularly $19.95) online for a limited time only. For the bold patriots looking to make a fashion statement, KENTWOOL will offer a limited edition “Mix & Match” pack featuring one each of the Liberty, Stars – Blue, Stars & Stripes and Independence styles. The Mix & Match pack features a retail price of $35. The USA Collection is available in men’s sizes L and XL and in women’s Medium.

Since 2008, KENTWOOL has been manufacturing the “World’s Best Golf Sock,” just outside of Greenville, SC. Drawing on over 150 years of mastery in wool manufacturing, KENTWOOL leverages the attributes of wool, nature’s performance fiber, for unmatched comfort and performance in the sock category. For more information on the KENTWOOL brand, visit kentwool.com.

(STAMFORD, CT) – Arccos – maker of the game’s only GPS + Live Shot Tracking + Tour Analytics platform – has introduced King of the Hole, a new feature for its Arccos Driver system that turns any driving hole into a virtual long drive competition.

In celebration of the launch, the company is running an enter-to-win promotion through July 8 at arccosgolf.com. The Grand Prize package is highlighted by a two-person trip to the New York City area for a round of golf with and King of the Hole power driving lesson from two-time World Long Drive Champion Jamie Sadlowski.

King of the Hole includes a live leaderboard for each driving hole across the nearly 40,000 courses mapped on the Arccos system. Each leaderboard is populated with the yardages for the 10 longest drives in the fairway recorded by Arccos Driver users on that hole, and the players’ names.

“System enhancements like King of the Hole further extend our category leadership position while fostering even deeper engagement with our rapidly expanding user base,” says Sal Syed, Arccos CEO. “In this case, King of the Hole aligns perfectly with our sponsorship of both Jamie Sadlowski and the 2016 World Long Drive Championship.”

Geared toward every golfer that revels in crushing the ball, battling friends and reliving the glory of their longest shots, Arccos Driver delivers real-time data for tee shot distances, fairways hit and more. The single-sensor system automatically detects each drive, then uses sensors found on all major smartphones to record second shot position with no tagging or other annoying disruptions. The product is available at Apple Stores and all major golf retailers nationwide, as well as arccosgolf.com.

• Advanced GPS for nearly 40,000 courses worldwide
• Distance & Accuracy Stats for every drive and round
• Personalized Challenges based on performance history
• Live Leaderboards for daily, weekly, monthly and customized competitions
• Social Bragging via one-touch posting to Facebook, Twitter and Instagram
• Precise Shot Detection that distinguishes between real and practice shots

FORT WORTH, TEXAS, June 28th, 2016 – The Ben Hogan Golf Equipment Company today announced a significant expansion of its online HoganFit™ clubfitting process.  A visit to the new Ben Hogan Online Performance Center first offers each golfer a complete Bag Mapping Analysis, which provides an insightful look into the actual technical aspects of the golfer’s current set make-up.  From there, the golfer can choose to see “Ben Hogan Solutions” in a virtual clubfitting experience to re-working any aspect of their set make-up.

Once the Bag Mapping Analysis is completed, the golfer can choose from any of four areas of fitting:

“Our company’s values and our passion for precision are founded on Mr. Hogan’s relentless pursuit of perfection,” said Terry Koehler, President/CEO of The Ben Hogan Golf Equipment Company. “Our new Ben Hogan Online Performance Center is very sophisticated and is the first step to optimizing a golfer’s ‘tool box’ for better golf.”

The entire Ben Hogan product line is based on giving each golfer the exact loft matrix in their hybrids, irons and wedges that will optimize their tee-to-green performance.  The Company’s commitment to precision is illustrated by the fact that each of the three iron models is crafted in every loft of iron from 20 to 47 degrees, which can be configured into any of four different sequences to fit any golfer’s launch tendencies and preferences.  The TK wedges are available in every loft from 44 to 63 degrees, and the VKTR hybrids in any loft from 17 to 27 degrees.

“Ben Hogan was meticulous in the way he did everything,” explained Terry Koehler.  “We believe he would be very proud of the extremes we have taken to provide golfers with this level of precision in assembling just the right set of clubs to get the most out of their own hard-earned skills.

“We created the Online Performance Center’s Bag Mapping Analysis to illustrate to any golfer the disparate loft gapping throughout his or her set that is the result of the industry’s relentless pursuit of distance at any cost.  From that understanding, golfers quickly appreciate how we have applied our technologies to re-align the set for improved accuracy and distance control, which leads to better shotmaking.”

The Ben Hogan Online Performance Center can be found at  BenHoganGolf.com. 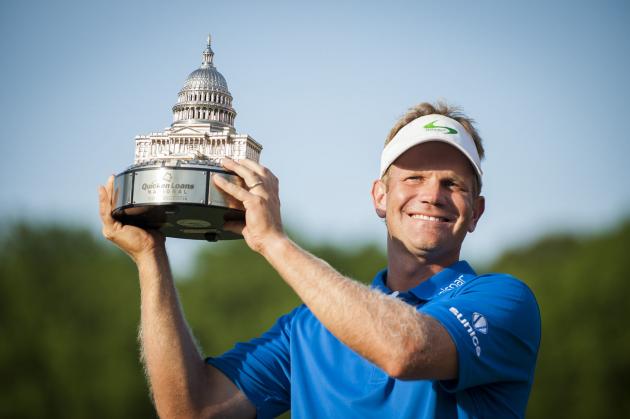 CARLSBAD, Calif. (June 26, 2016) – Nippon Shaft scored a trifecta over the weekend, with winners on the PGA Tour, European Tour and the Web.com Tour.

The winner of the Quicken Loans National used Nippon Shaft’s steel N.S. PRO MODUS³ 115 Wedge Shafts in his 54-degree sand wedge and in his 60-degree lob wedge.  The 34-year-old Navy veteran shot 17-under par 267 on rounds of 66-65-67 and 69 to win by three shots at Congressional Country Club in Bethesda, Md.  He earned $1.242 million for the victory, his first on the PGA TOUR.

“In consultation with Tour players, Nippon Shaft developed steel shafts specifically for use in wedges,” said Hiro Fukuda, sales and marketing for Nippon Shaft.  “We are pleased that the winner of the Quicken Loans National was able to excel in his short game while using our products.”

On the final day, he played 36 holes, as his Saturday round was canceled because of rainy weather.

“Nippon Shaft congratulates the 2016 champion of the BMW International Open and is proud that he used Nippon Shaft’s N.S. PRO MODUS3 Tour 120 X steel shafts in his wedges and irons to help carry him to victory,” said Fukuda.

Meanwhile, on the Web.com Tour, the champion of the Air Capital Classic used Nippon Shaft’s N.S. PRO MODUS3 Tour 130 X steel shafts in his irons and wedges en route to his first victory on the second hole of a three-man, sudden-death playoff.

With the victory, the 23-year-old Georgia Tech product earned one of 25 PGA TOUR cards – giving him playing privileges on the “big” tour starting next season – along with a winner’s check of $112,000.  He shot 17-under par on rounds of 68-67-61-67 at Crestview Country Club in Wichita. His 9-under par 61 on Saturday tied the course record.

“Nippon Shaft is very proud to congratulate the winner of the Air Capital Classic not only on victory but on realizing his dream of earning playing privileges on the PGA TOUR,” Fukuda said.  “He not only has had a great amateur career but has played very consistently in his short time as a professional.  We look forward to watching him as his career moves forward.”